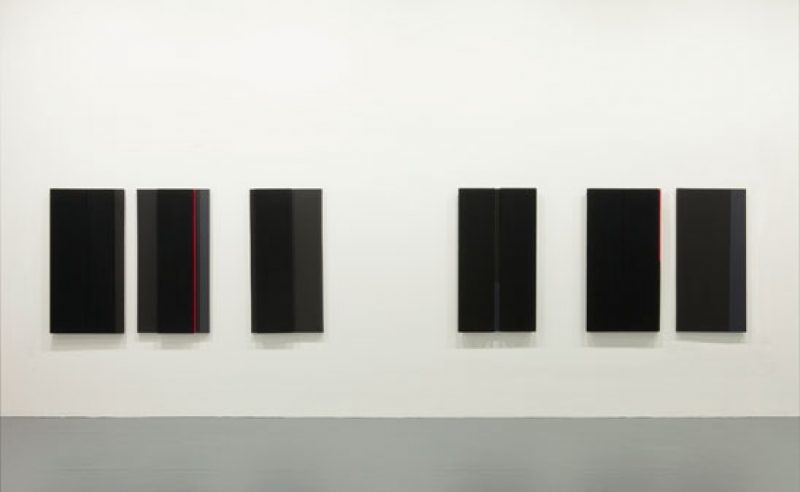 Absorb/Diffuse, detail of installation at the Kitchen, 2011, six acoustic absorber panels, black gesso, and acrylic glaze on canvas, 48 × 24 inches each.

Jennie C. Jones’s art reflects on the cultures of sound and music in a visual context. In recent years, she has presented cerebral and imaginative responses to what she calls “the physical residue of music,” using strips of audiotape, bits of wire, instrument cables, cassette casings, or handfuls of earbuds. These devices, turned into sculptures, with an ephemerality of material as well as form, have been framed or hung from the gallery walls with both elegance and restraint.

With Absorb / Diffuse, her fall exhibition at The Kitchen in New York City, Jones uses actual sound and brings it into the physical realm with an arresting composition that is accompanied by a series of so-called acoustic paintings. From the Low is a powerful, affecting, and, at times, discomforting sound piece that emphasizes low-frequency samples gathered and appropriated from a number of sources from jazz, contemporary minimalism, and orchestral compositions to modern electronica. The low end in a song generally refers to the sonic space filled by a bass guitar or synthesizer. It is often the glue that joins the various instruments and voices together. The low end can be a subtle bed of warmth. When pushed to higher volumes, those same frequencies can tap into darker (i.e., foreboding) territory, subtly or not so subtly affecting the listener’s emotional state, and even his or her breathing. As I write this, an unseen car passes by, leaving a low throbbing bass line in its wake. The walls rattle, as do my inner organs. Bass frequencies are pervasive and potentially invasive. 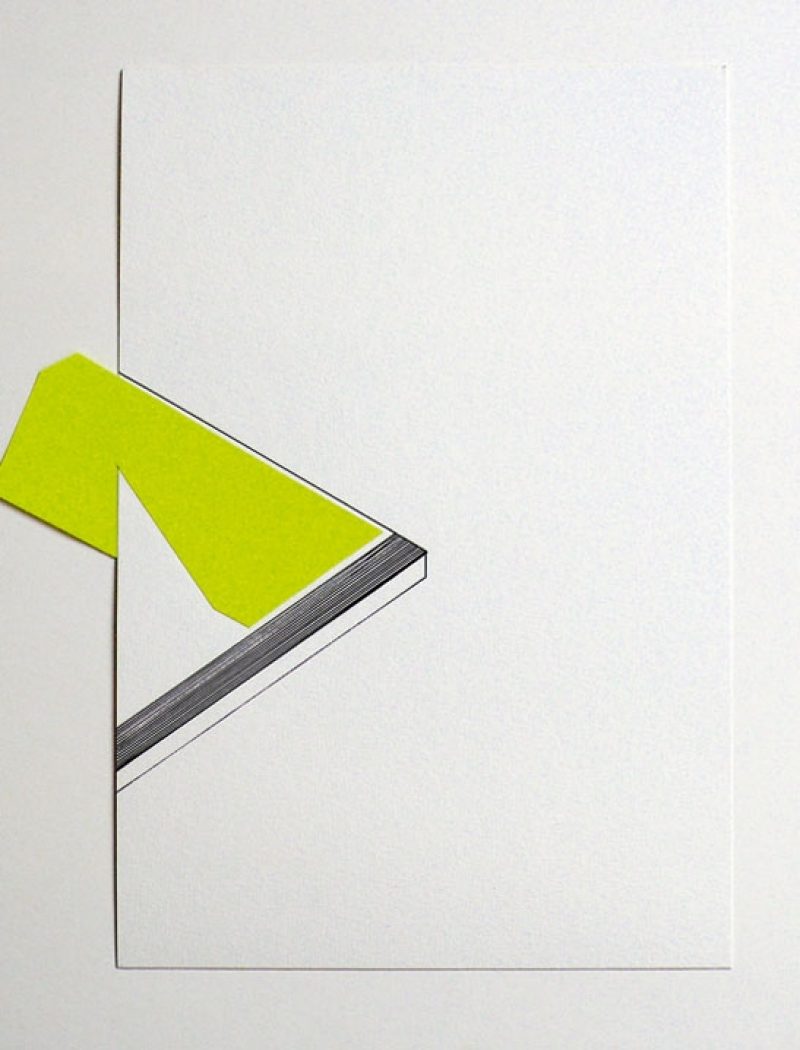 In From the Low, microsamples from Jones’s music collection are looped and sequenced. A fragment of Charles Mingus’s bass is morphed into a denser, orchestral drone that goes on and on. In a film, such a sound might be heard in passing, to create a sense of dread or warning. When extended, the sound will hold us in a state of suspended animation. It’s a musical statement but also a political one; an exertion of power. Bass—the funkiest bass lines, the deepest of baritones—might (stereotypically) be thought to fill the dark end of the musical spectrum. (Compare that to the bright jangle of a Nashville-tuned guitar or the high beeping sine tones of some of Jones’s sound-art contemporaries like Carsten Nicolai or Ryoji Ikeda.) By composing a work based on low frequencies, Jones fills the room with sculptural tones, which open up to a series of implicit psychological and political overtones. 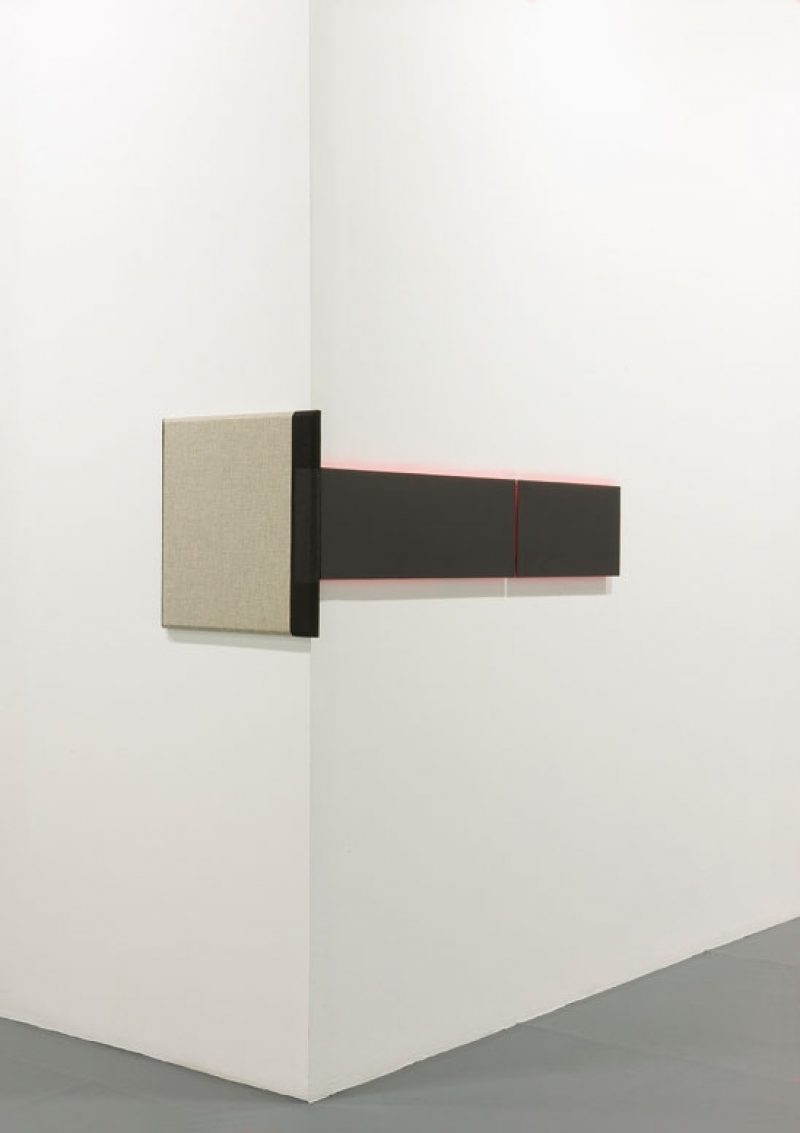 As a visual sound track to From the Low, Jones’s exhibition also includes seemingly monolithic wall pieces made with absorber and diffuser panels. These are materials generally used to focus sound in recording studios and for soundproofing. Jones limits herself to a minimal color palette, primarily black and white with a strip of red here and there. These pieces stand out with a controlled and stark sensibility. They feel like visual echoes of her sound work. They might also be taken as graphic scores. Titles such as Semitone-Bar, Resonance at 1/3, and Deep Tone endow these otherwise fairly utilitarian shapes and materials with a surprising resonant poetry. In shape and tone, Jones has absorbed the white paintings of Robert Rauschenberg and the black paintings of Kazimir Malevich and Ad Reinhardt. But perhaps a more pertinent reference is Bruce Nauman’s architectural sound spaces Acoustic Wedge (Sound Wedge–Double Wedge), from 1969–70, and Acoustic Pressure Piece, from 1971. Nauman used sound-dampening materials. As viewers/listeners move by or through his built spaces they are affected by the absorption materials and the forms, provoking a sense of dislocation and dread as visitors are deprived of acoustic reflection. With Jones, the works cited above have been sampled and remixed and given a new context, perhaps to be classified in a category of black minimalism. Jones operates in a realm of sampling that is based in conceptual art with shadows of hip-hop but also musique concrète. Absorb / Diffuse is a space of sculptural listening, rich with emotional impact but also underscoring racial politics framed in striking statements at once quiet and loud.

Stephen Vitiello is a musician and sound artist living in Richmond, Virginia. His long-term installation All Those Vanished Engines, at MASS MoCA in North Adams, will reopen in the spring of 2012. 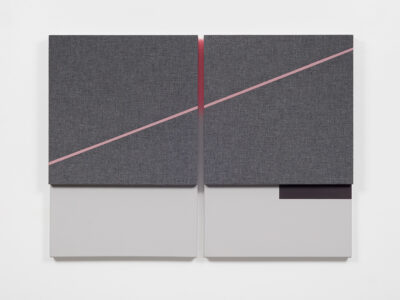