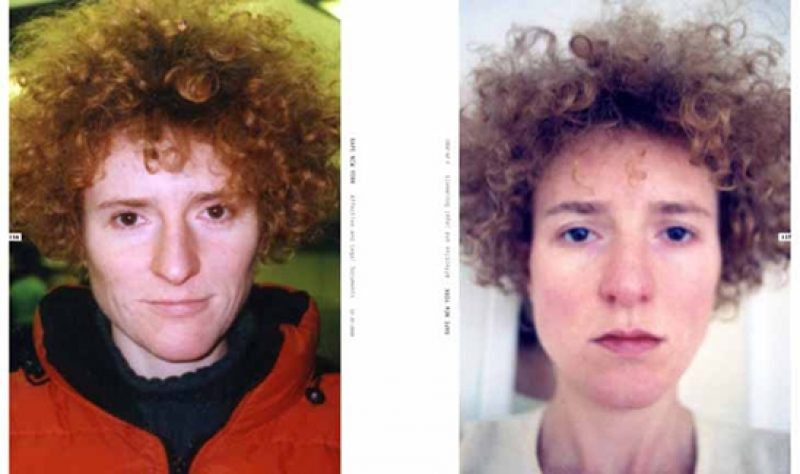 Soon after moving to New York, Jana Leo was attacked, held hostage by a stranger and raped during the course of an afternoon in her apartment. Rape New York, a new exhibition at Invisible-Exports (14A Orchard Street just north of Canal) opening June 26 and running through July 3, is an open archive of documents Leo has accumulated since the rape. The exhibit accompanies the release of her book about her experience, Rape New York. The archive includes police reports, crime scene photographs, notes from Leo’s therapist, the transcript of an interview with her assailant, assorted documents surrounding the crime, and records from the legal case that followed. The documents are organized in boxes at the gallery, with Leo herself acting as archivist, retrieving documents by request for visitors who present photo ID. In this way, the visitor takes responsibility for what’s requested, making private again what was made public by Leo, the latest revolution in a cycle that began with the rape itself. Rape New York is evocative, wrenching-a raw, uncensored, singular exploration of the public and personal. 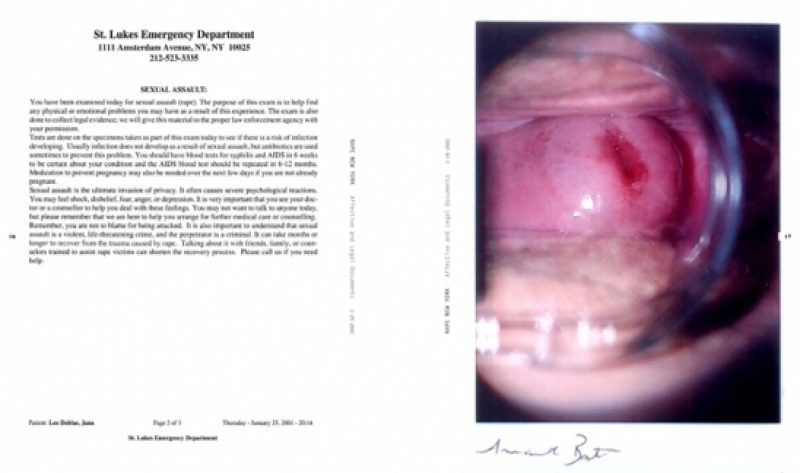 Courtesy of Jana Leo and Invisible-Exports.

Caitlin Roper When did you decide to turn your experience into art?

Jana Leo Immediately after the assailant left, I took a picture of the bed’s wrinkled sheets and collected traces: a plastic cup, cigarette butts. Prior to the victimization I was a student of architecture and a philosophy major. My work encompassed autobiographical elements and explored “domestic space.” Before the assault, I had written about photography and taken pictures. The day after being held hostage in my apartment and raped, it felt natural for me to return to the building to take pictures. I was not a straight documentarian, but I was adept at capturing absences. A photograph translates reality into an image; it is a transcript. But when I take a photograph, my expectation is to see in the picture what cannot be seen in reality. My impulse was to return to the building to follow the imaginary path of the rapist through the roof door and down the staircase. By following his path, I thought I might be able to register a trace of his presence. That trace is in the photographs, not in the form of a figurative ghost but in the mysterious quality of the stairs. My camera, loaded with film, was mounted on a tripod facing the intruder during the two hours he was in my apartment. Taking a photograph of his face for identification would have been too dangerous. On the morning following the rape, I didn’t recognize myself in the bathroom mirror. I took a picture. The photograph shows the rapist’s reflection in my face, the effects of his actions distorting my features. The only thing I could realistically do was to capture his absence.

Initially, I collected and dissected details to understand the emotional void I felt in my life, caused by this random act. The archive grew to include a series of autobiographical notes, drawings, and writing that grasped, with precision, the effects of the assault. Even though I wasn’t aware at the time that they would have value as evidence, the documents were used years later as legal proof. In the criminal procedure against the assailant I had to prove that it was rape. In the civil suit against the landlord, I had to prove my emotional loss. These documents illustrated my state of mind; I refer to them as affective documents.

The self-portrait taken in 2001 after the assault is a transcript of the crime in my face; its importance is that it was taken the day after the rape. In this sense it is a document. This same post-rape portrait juxtaposed with a photograph of me taken a few days before the rape establishes the before and after. When seen comparatively the self-portrait is neither a photograph nor a document, it is an affective document. Each photograph refers to a reality. The value of the comparison is that, besides referencing a reality, it offers a reading of it, making another reality clear. This is also a function of art.

CR Has the experience of creating the book and open archive been therapeutic?

JL In my art practice I often show my work outside of the traditional art spaces and forms. A series of photographs and writings that could be considered art or poetry, outside the context of law, were introduced in legal proceedings. In trials, feelings may be expressed but they’re rarely documented. As an archive of these art processes and language being exported to law, Rape New York serves as a “textbook” on art’s potential to enrich other disciplines, a manual. As an archive of a civil and criminal trial, Rape New York recounts how these disparate art methodologies were used in a legal case, infiltrating law, illustrating how art unifies process and content and creates a bridge between emotions and facts in order to resist dehumanization.

The self-portrait taken in the bathroom mirror the day after the rape is grim. The two black holes of my eyes make people uneasy. To talk about rape or to show its effect is taboo. People blame the victim (they do not want to be contaminated by her sadness and alienation), so she stays silent. To speak may not be therapeutic, but it is necessary. 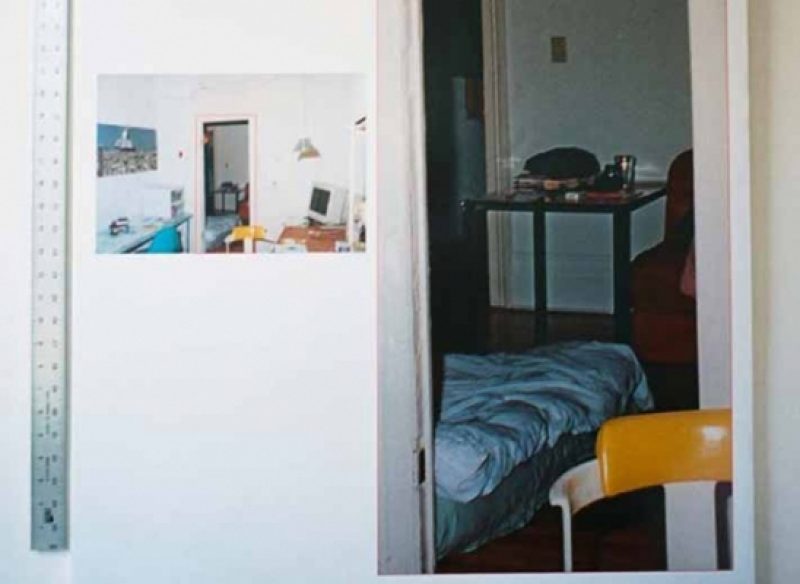 Courtesy of Jana Leo and Invisible-Exports.

CR What is it like for you to read these documents, to see other people, even strangers, reading them?

JL Being at home alone, scanning documents, going over the layout of the book, or taking stills from videos was debilitating. When writing, I reread documents to check for accuracy, and the reading continued beyond the data seeking. When looking at the police follow-up—long after my appearance at the police archives for perpetrator identification—I relived the session and saw the faces in the mug shots. I felt I was living in a prison of my own making, created by an endless relationship to a single devastating event. After the brief sense of freedom I had when the lawsuit ended in 2007, a feeling of emptiness and the realization of the years I’d lost while working on something that was not my dream overwhelmed me.

To write a book about my rape experience, or to work on it in other forms, may seem contradictory, because I was losing more time recovering those lost years. But the situation was different than during the criminal and the civil suit. Then I had no emotional distance from the situation and I was a part of the legal process: the plaintiff. But in putting the book and exhibit together, the work didn’t have a direct and factual consequence in my life or in the lives of others; I wasn’t a pawn being played according to someone else’s rules; I was exposing the rules.

I don’t know how it is going to be to see other people, strangers, reading these documents; I will be able to tell you when the show is over.

CR How did you decide you wanted to be the conduit between the visitors and the documents?

JL An archive creates distance between private records and the events they record. The book, an index of the archive, is primarily the narration of my individual reflection on an event. It’s an autobiography, documenting a period in my life. It’s also a compilation of essays on the nature of rape and crime. I was the victim, but I became the examiner through analyzing and archiving.

Psychology, law, criminology, and literature each conceptualize rape differently. This work, Rape New York, tries to juxtapose these approaches, revealing by contrast the roles of written and visual language in communicating facts and emotions. Lawyers, psychologists, and detectives report facts. Their reports, even in the case of psychologists, do not document emotions. Clearly though, there is a correlation between trauma and the loss of joy and between the act of rape and the long-term feelings of humiliation.

The language that professionals often use when reporting on rape separates emotions from facts. But emotions are a reality inseparable from facts. Art unifies process and content and bridges emotions and facts. The use of codified phrases and bureaucratic procedures facilitates recording and classification but conceals the full reality of rape, reducing its emotional importance. Reality is reduced to facts and the victim to a subject for study. For the victim, rape is a life-altering event, for the rapist it is merely an action—a crime he voluntarily commits. When a rape is treated as an action, one takes the point of view of the rapist. Switching to the perspective of the victim, rape is treated as an event. Rape New York, by including works of art and personal narratives, tries to bridge emotions and facts to address the reality of rape without taking the perspective of the assailant.

The book that has just been published is only part of “the big book” that hasn’t been made public in any form. Once the “textbook” was finished, I thought about ways to show these documents, and the idea of an exhibition came up; this was in 2008. Through organizing the material for the show I realized another reason for making an archive: violent acts made out of private records became “of public concern.”

Caitlin Roper is the managing editor of the Paris Review. She lives in Brooklyn.