Painting that boils down shapes. 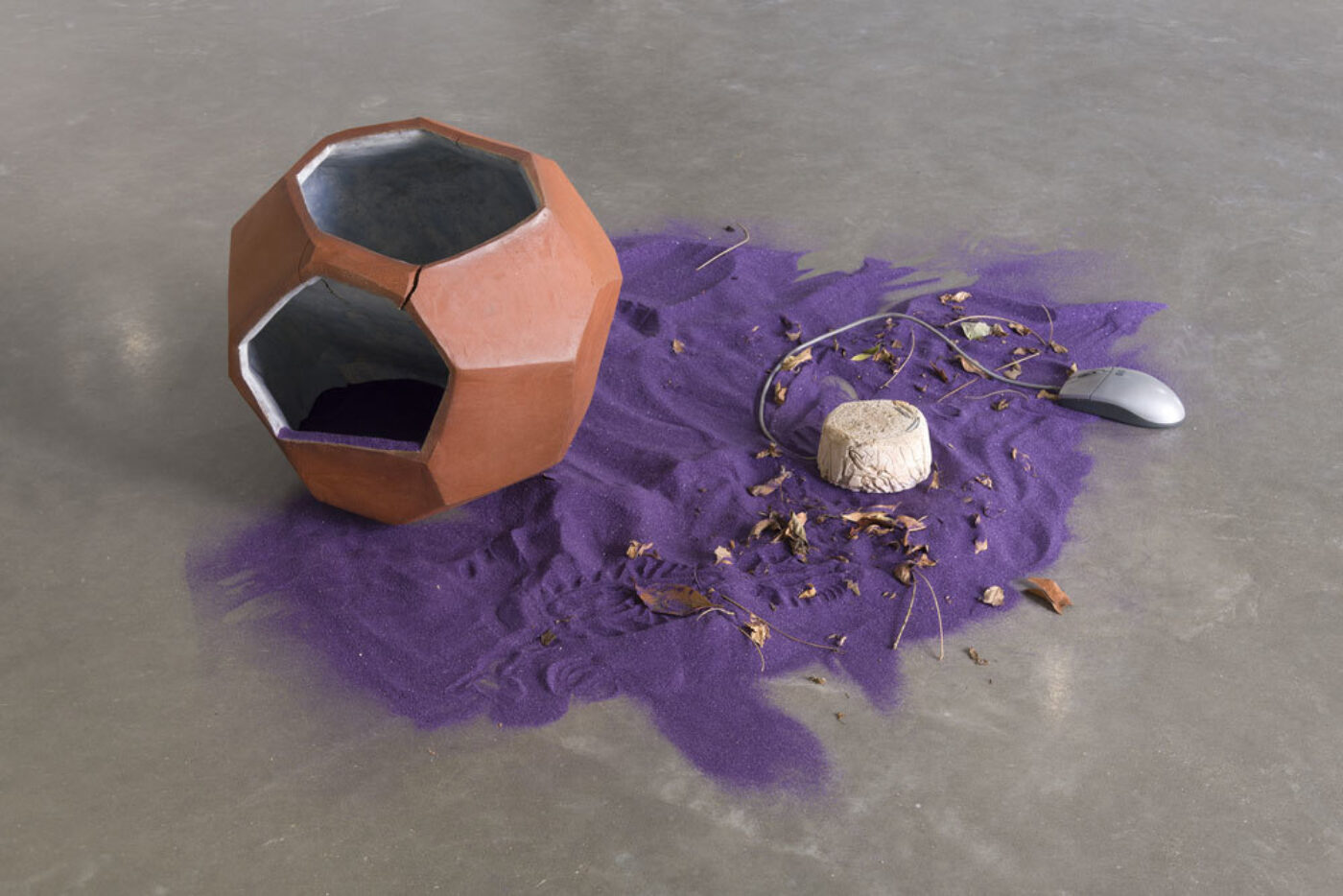 I jokingly assured Anna Sew Hoy that this interview would take less of a maudlin turn than some of my other recent writing, so I will try to stick to that in my introduction. I might shift from melancholy to embarrassment—related but slightly different emotions. Sew Hoy’s work sometimes causes viewers to be unsure what kind of creature they are seeing and how that creature might likewise view them. Critics often come to a studio visit or a piece of writing with a desire to probe and denude all possible references or precedents. Our deferral or interpretive sleight-of-hand when approaching Sew Hoy is especially pernicious when the body might be evoked. Critics often avoid the body and talk about the Body instead, or the biomorphic, or the organic, as well as a variety of (often feminized) terms that evoke the quirkiness of authorship: cozy, amoebic, fanciful, folk art, mannered—just to name a few that have swirled around Sew Hoy over the years. There is nothing wrong with naming something, but to truly love is to avoid comparison. What if we were to let Sew Hoy’s work be, to not subject it to our paranoia? This would not necessarily be post- or anti-critical or art-for-art’s-sake, but rather an earnest and gentle attempt to allow bodies, objects, and words to exist for us and for themselves.

William J. Simmons What is the origin of the title for your show at Various Small Fires?

Anna Sew Hoy The Wettest Letter comes from a riddle that Liz Larner told in a public conversation with Ariana Reines this February in Los Angeles. I worked with Ariana before on my book Blood Moon Proposition, which came out last year. At the talk Liz asked, “What is the wettest letter of the alphabet?” That’s the riddle. Do you know what it is?

ASH The C! Get it? It’s a joke that you could tell your four-year-old, but you could also tell it to somebody like Ariana and it takes on this whole other meaning. It becomes slightly pornographic. I often think about writing and how to attach words to my work in general, and I’ve been really inspired by Ariana’s writing. I’m interested in what happens when my shapes butt up against very emotive language. Emotions are the most complex of thoughts and the most complicated spaces. I call the shapes in my work “boiled down” because they don’t seem complex when you approach them at first, but they open up, and invite you to make associations as you look. Is it a thumb, a temple, a periscope, or a boot? I don’t want you to land on any single thing, necessarily. Is it a space or a thought? It’s like a good bone broth; there’s a lot in it. 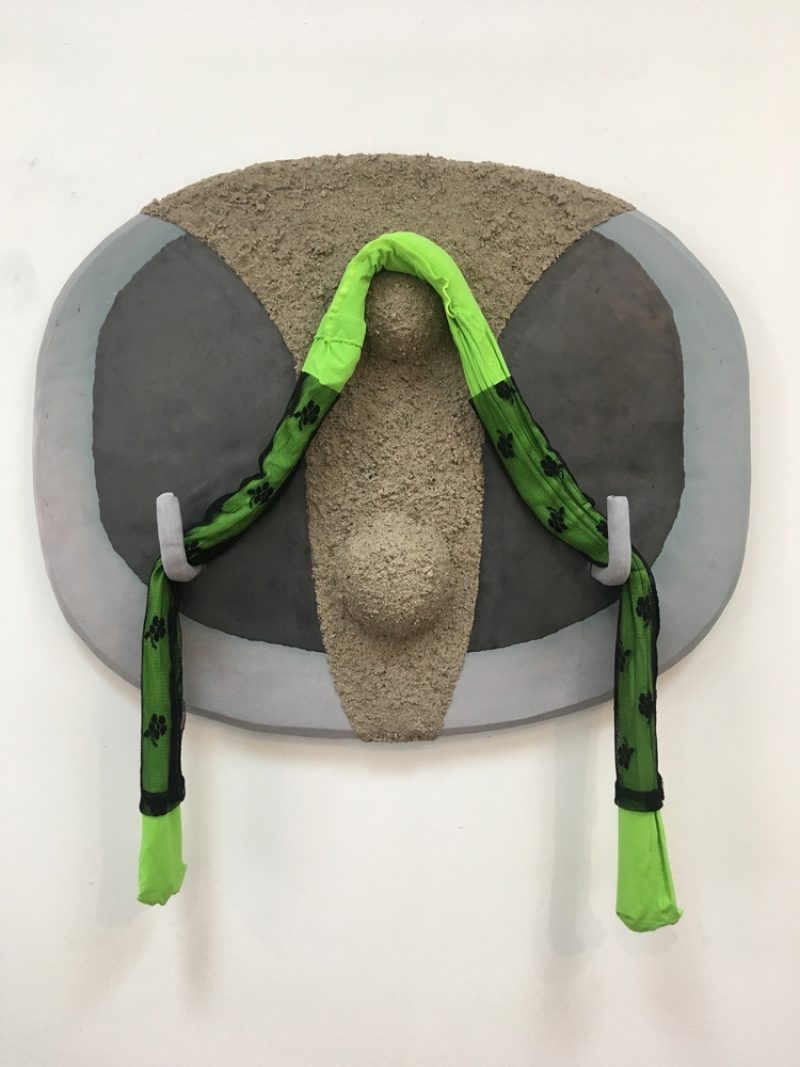 WJS That makes me think of the interview you did with Rita Gonzalez for your book Suppose and a Pair of Jeans (2013). It’s a very referential interview that connects your work to Barbara Kruger, Nancy Grossman, and Rei Kawakubo.

WJS Do you have an affinity for art history with a capital A and a capital H?

ASH I am an art nerd, and I want to experience the primary source material—the actual sculpture, the actual words written, the actual creation. When I see the actual thing, does it move me? Can I use it? My friend John Tain worked at the Getty Research Institute, and a couple of years ago he invited Eve Fowler and me to see Harmony Hammond’s archives, which he helped acquire. We looked at Harmony’s sketchbooks and the lists she compiled of women artists. Most thrilling were the Hairbags (1972) she made from the hair of members of her first consciousness-raising group. I had never seen anything like them before, and there they were on a table in front of us.

There’s the mainstream discourse, and then there are all the other discourses. When you teach, you get to be in charge of who is important, and I don’t think it’s my job to teach the mainstream, because students are going to get that anyway. So much gets written out of history, and I want to put important things back in. 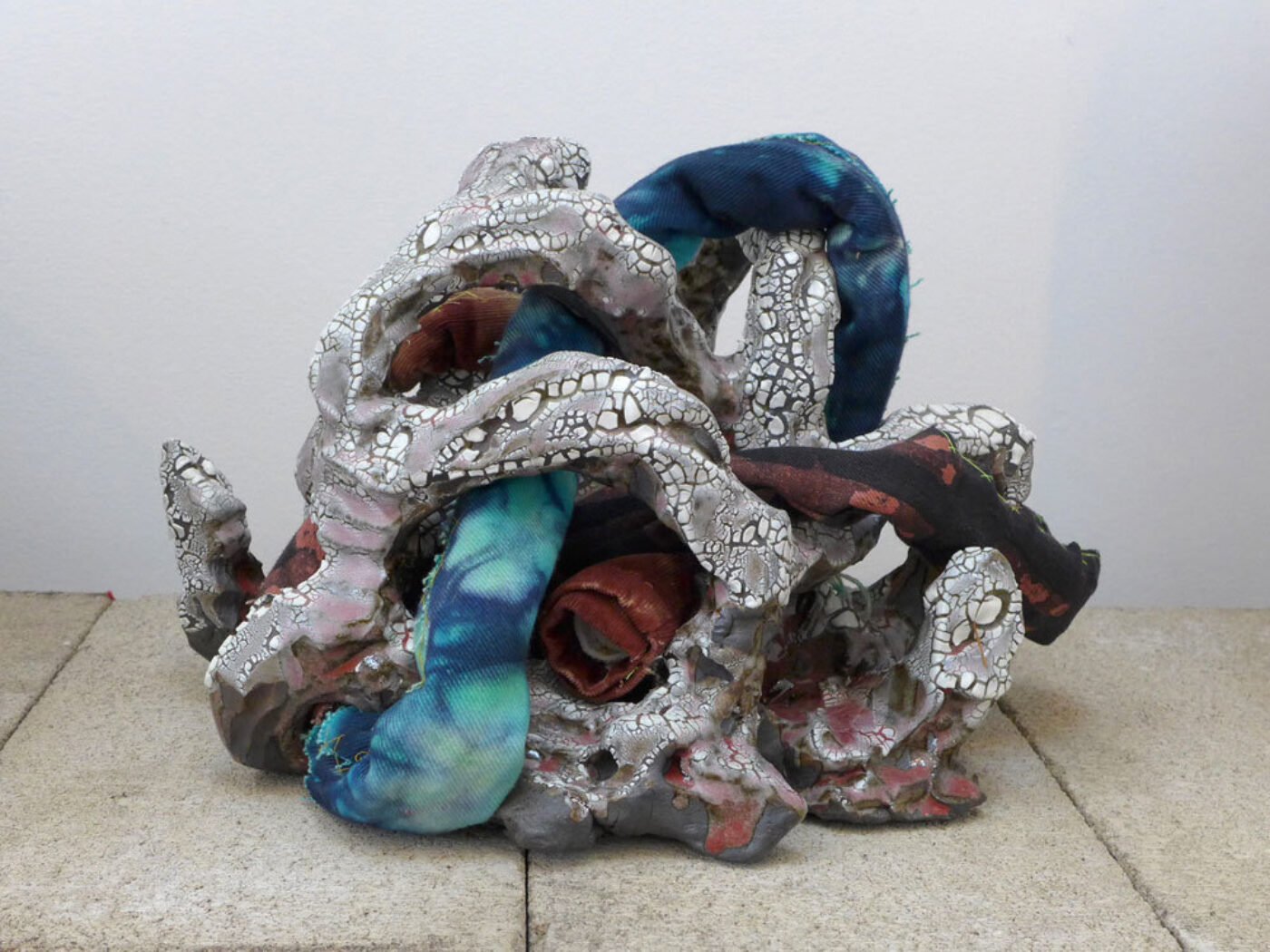 WJS Your work might connect to that mutability of history, to the notion that history is itself mutable, or changeable, or consists of multiple strands occurring at the same time. But I don’t want to reduce your work to metaphor!

ASH One thing that inspires this work is jamming together opposites and making them exist in the same space. I don’t know if they coexist or if they’re fighting the whole time. Fighting the whole time is good, too. In Blood Moon Breastplate (2019), it’s the textures—the frayed, rough edges of those jean seams, as against the light-sucking dry velvet, as against that super glossy patent leather. I get a lot of energy out of finding things to pile on top of each other, and I want them to be questioning each other while they’re together on the same piece. I suppose one brings the other into focus: the leather scrunchie is a foil for the rust-red velvet and vice versa.

WJS Speaking of fighting or questioning, there’s a bodily melancholy with all of these. I think of bodily accoutrements or bodily symbols that are absent.

ASH I thought we weren’t getting maudlin! I try to fight the melancholic with anger or confidence or fierceness or bravado or something. I try to be fearless with making something that is ugly, for instance. Allowing ugliness in is a good antidote to over-romanticism, the maudlin, or the melancholic. 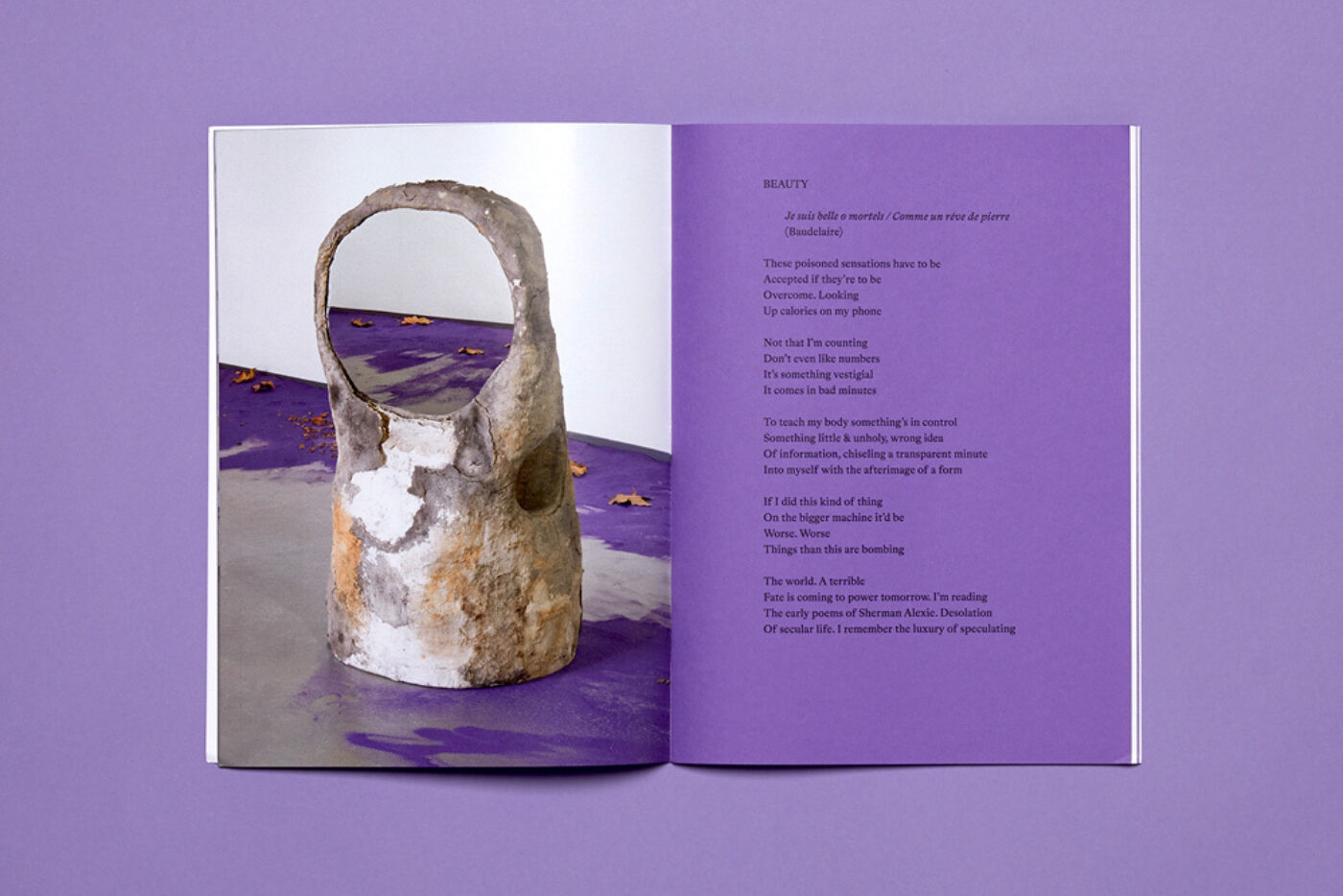 WJS Does ugliness connect in some way to your affinity for Kawakubo with her tumor-like silhouettes?

ASH She’s my favorite artist, although I’m not sure if she calls herself an artist. When I’m making these works, I’m trying to not be trapped in my body, and I’m trying to be as conscious to possibility as I can. Kawakubo obviously doesn’t let the body’s physical limits or what we think of as the limits of our body stop her or decide for her the design. Her clothes are free from that. At the same time, they have to go on a body. That’s a very interesting tension.

WJS Words likewise have to in some way be attached to an object, an idea, or a body; but they also have the capacity to float more freely.

ASH I love to think about language as a parallel universe to my sculptures. They coexist and they exist alongside each other, but they don’t have to touch. They’re just parallel, two parallel universes.

WJS There’s a politics imbued in your thinking generally about binaries, bodies, and legibility, rather than an explicitly representational politics. That’s the method of queerness and some feminisms.

ASH I’ve been focused on ideas of queerness, postcolonial thought, and feminism for long enough now that they’re part of my life, part of my way of thinking, and part of my process. These ideas are often full of buzzwords, and that part I’m not thinking about so much. I’m interested in how those ideas are embedded in my studio process so that they become practiced action, method. They don’t appear as words in my work, of course; it’s the way that I put materials together. When you see the way I put the materials together in a work, the politics are revealed. This is the tough part, because when you see these things, it’s like, “What am I looking at?” And it takes a little time to just start to name what you see, such as lace tights, a thumb drive, leather scrunchie, and then wonder if that is a boob or an ear bud? Is that a kidney pool? And then it starts to reveal itself. The sexuality of the work is embedded in its making. I don’t appear as queer with my husband and two kids, but queer and postcolonial politics are embedded in my life. I want all the moves I made to complete a work to be legible. I am aiming for a kind of clarity.

Anna Sew Hoy: The Wettest Letter is on view at Various Small Fires in Los Angeles until April 27. 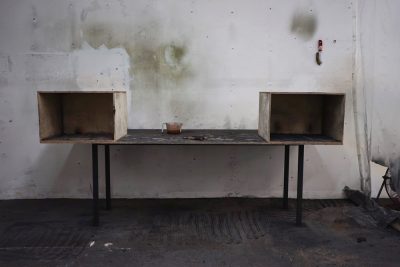