The painter Jacqueline Humphries might find it odd that NBC uses an editing process called the “tease and squeeze”: compressing the closing credits into one-third of the screen, while outtakes and other brief clips of “promotainment” roll on the remaining two-thirds. Stranger still is the widespread television network editing practice of removing “the blacks,” those millisecond fade-outs between features and commercials, designed to prevent the anxious viewer from hitting the remote. Even Sony outfits its Discman with a function that erases pauses between songs, in effect, turning the average De La Soul disc into one continuous skit. Humphries would either cringe or smile at this, since she stages her paintings precisely within the liminal, staticky zone between main events.

Considering that issues of converging vanishing points in painting haven’t been pertinent for over four centuries, it makes sense to eradicate the horizon line altogether and treat the resulting flat screen as more than just a stage showcasing technical bravura. Narrative, as the saying goes, commences while abstraction is enacted. But in this case, the enactment focuses on removing framing devices (and, consequently, boundary metaphors) to highlight a series of planes, superimposed upon each other—in effect, dismissing Greenberg’s classic insistence on a single, terminally flat plane. The large black monochrome fields that Humphries begins with do not suggest the infinite depth, wormholes, and dimensional portals popular in recent sci-fi paintings. Rather, she evokes a dialectic of zenith and nadir, the void not as transmission to another time-space continuum, but an attempt to break free from earth’s gravity altogether.

Virilio described this as “an alternation of terrestrial space and its extraterrestrial absence.” Gestures, whether rigid orthogonals or scattered drips, have a tendency to fall upward in Humphries paintings. Moreover, these firm bars and faint, staccato flourishes—always placed at elegant intervals—seem to communicate with each other, to be setting up an infinite relay akin to a typical interface sequence: server request, script, application, data request, Flash animation, and back again through the channel router. Languid protocols on a new operating system. The effect is like living inside a scratched contact lens, or a Movado watch whose few remaining moving parts have jettisoned all the friction. 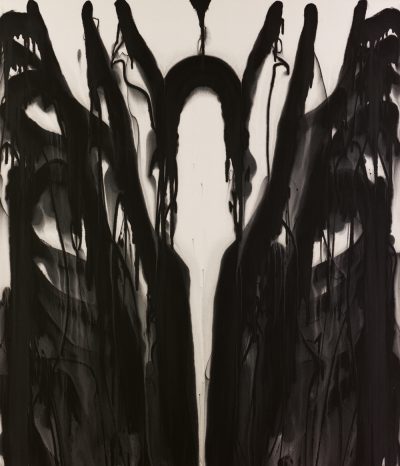