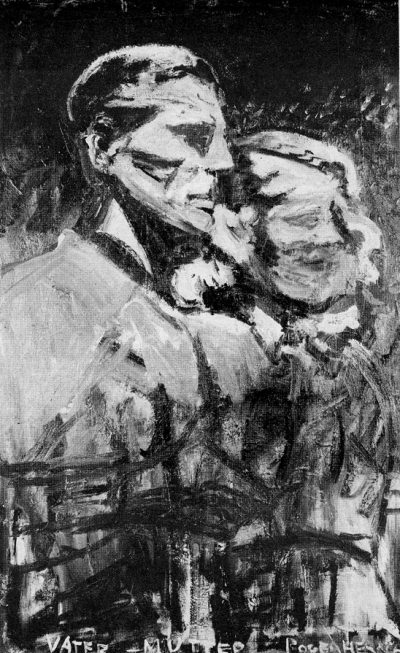 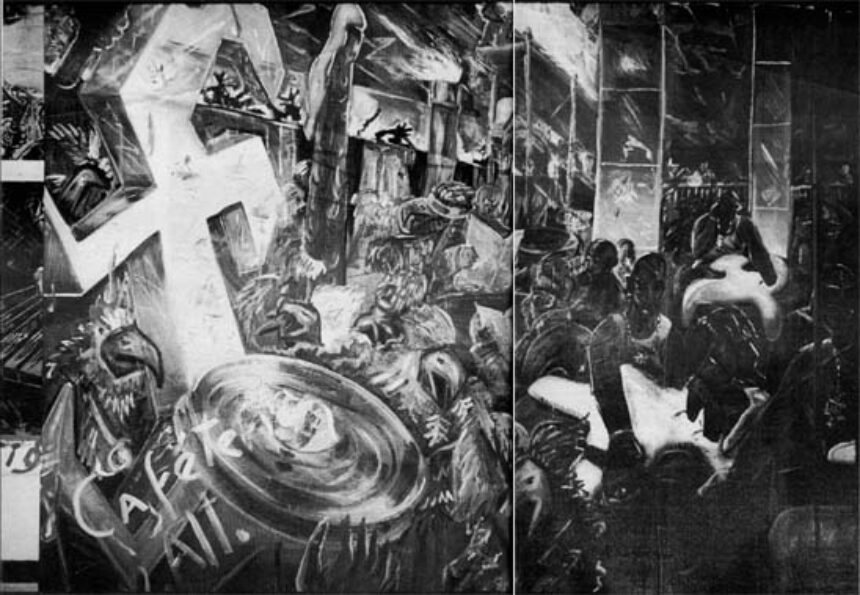 “Something is beautiful if it is honest. If you do an engaged piece of work, which is sincere, the concept of beauty meets the concept of truth. So no illusive harmony. I try to reach people who strive for truth, for identity. Although these conceptions are incredibly warn out, one must try to find the way back to these simple conceptions.”

Whenever Penck and Immendorff met in East-Berlin, they could only do so with much difficulty because of the particular political circumstances.

As Penck painted in a too “western” way, a prohibition to pursue his artistic activities was imposed on him, and eventually, in 1980, he was deprived of his DDR citizenship.

Immendorff had a hard time as an artist in West Germany. His art, stamped from the beginning by his political awareness, and thus not in agreement with the then prevailing art trends in the west, found almost no response.

Their artistic isolation, the effects of politics on their art and the partition of Germany were the essential subjects of their talks, which in 1977 resulted in a common exhibition; Penck mal Immendorff, Immendorff mal Penck in Cologne, Germany.

For Immendorff the intense preoccupation with the partition of Germany and the artistic and personal problem of the forced separation of the Penck-Immendorff team became a necessity. The result of this artistic struggle manifested itself in 1978 in his painting Café Deutschland. It is his answer to the absurdity of this artificial partition into two countries, which, notwithstanding their different political ideologies, exhibit a startling parallelism in their systems—in both countries the individual has lost the disposal of his own life.

The decisive impulse for Café Deutschland was the painting Caffé Greco by the Italian realist Renato Guttuso, which Immendorff saw at the Biennale in Venice in 1976. In this picture Guttuso shows the art historical import of the Roman artists’ café. He puts together works of art and persons from different chronological eras. Guttuso does not believe “that an artist defies reality with the intention to change it. This is no direct process. The artist paints things, not ideas. When the painter has ideas, that is, real ideas and no presumption, these issue from the painted things.”

This artistic attitude was the challenge for Immendorff to articulate decidedly his contrary conception of realism. Using the same picture measures as did Guttuso in Café GrecoImmendorff created the pendant painting Café Deutschland.

In his art he grapples with contemporary history in a very direct way, putting aside any artistic distance. He believes in the force inherent in things, in the strength of art to effect changes.

Here and now: do what needs to be done is the title of the book in which Immendorff analyzes the function of art in society. “For what and for whom do we make art at all?”

With reference to his own artistic development he tries to make clear in his report “that those who are engaged on the cultural sector always stand on one definitive side in political struggle.”

With self-criticism he reports of his early days as a child talented at drawing, up to the time of his artistic actions.

At the age of 16 he had his first individual exhibition, where he showed dream pictures and sketches of metropolitan scenes. The local press reviews were so encouraging that he left school, considering himself proudly as a real artist. He wanted to do something “completely new” in the field of art. 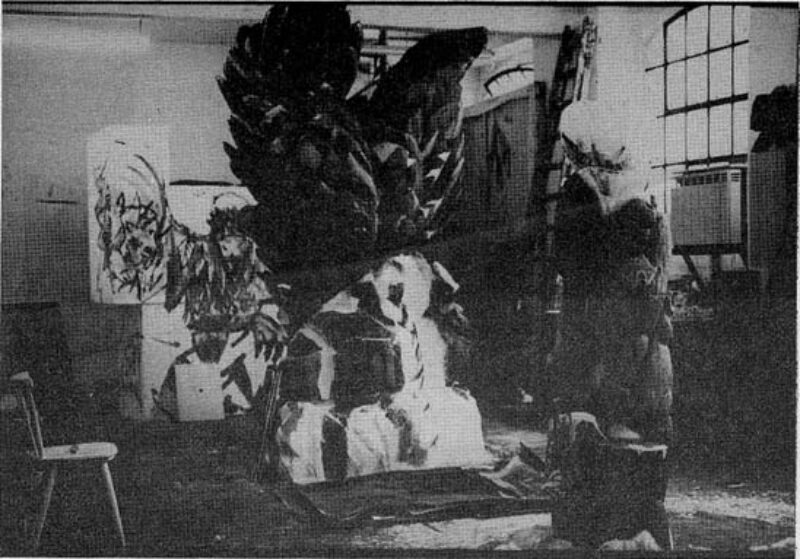 At 18 he was admitted to the Düsseldorf Academy of Art. After studying stage design under Theo Otto he changed over to the class of Joseph Beuys. That was in 1964, when Düsseldorf was a very active center of art. Many came from abroad to work, discuss and perform in the city. Prompted by Beuys’s words of “the freedom of man through art” and the consciousness-shaping power of art,” he began his political actions.

He chose the baby as a symbol for Love and Peace; created the “only respectable weapon”—a cannon, loaded with paper balls on which were written “dear words” and with flowers and babies as peace signs he protested against the war in Vietnam.

His wishful thinking, however, amounted to naught. The motto which the baby bore on a sign, “you are nice people,” was too general a message, not differentiating clearly between the “nice people” and the “reactionaries in art and politics,” “It is not the wish that counts, but the results.”

With his friends and fellow-students he held critical discussions about his “baby art,” and in 1968 he decided to found the “LIDL Academy.” LIDL (a word originating in baby language), was a place of action, where painters and action artists, writers, and filmmakers showed their work. The basic idea was always to find ways how to help change society by means of art.

The LIDL people used the medium of “house occupying” and demonstrations to protest against exorbitant rents and housing shortages. On the occasion of LIDL’s first anniversary, the LIDL people erected a little cardboard house, the “LIDL wing,” as an extension of the West German Parliament. The LIDL, wing was supposed to be understood as a creative, autonomous information and work organization. It was destroyed by security officers immediately upon erection.

Shape, technology and style were never of crucial importance to Immendorff. It was the political purpose alone that decided. His painting was action painting, as demonstrated in exhibitions such as Pinselwiderstand (4x) (Paint Brush Resistance (4x)) in Eindhoven, and Malermut rundum (Painters’ Courage All Around) in Berne, Switzerland. His attitude has not changed since, although his political engagedness conveys itself more and more through pictorial media. 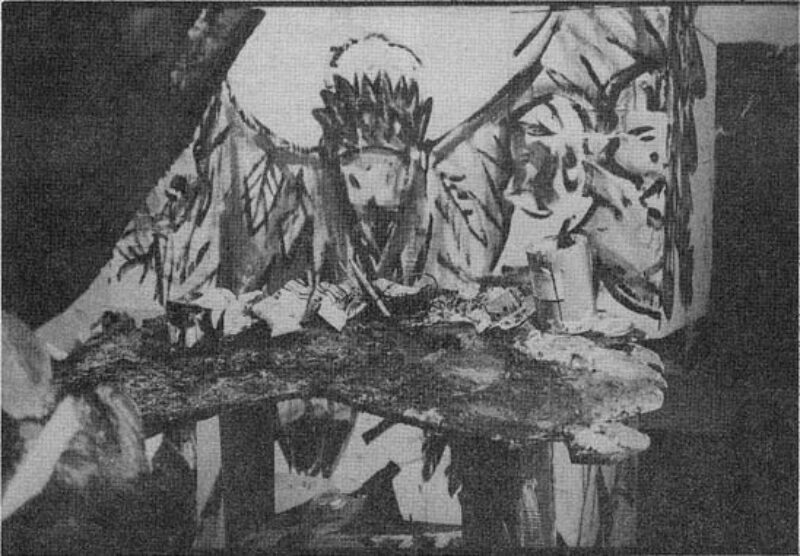 His development from political poster-painting to his present large picture painting led to a new conception—“realism without style.” His breakthrough came with his series Café Deutschland in Dusseldorf in 1982, which was followed by his first exhibition in the US in autumn 1982 at which time the Museum of Modern Art published a book with him.

In June 1983 he had an exhibition with Baselitz, Keifer, Lupertz, and Penck in St. Louis, under the title Expressions.

He speaks of the important American influence on Germany in the ’60s, when Kennedy was elected President and became a great idol. It was a time of hope. Pop art emerged on the horizon. It was already then—and that is what he wants the Americans to know—that Immendorff painted “wild.” (See: Hort auf zu malen.)

He wants, however, to draw a clear line of distinction between himself and the “young wilds,” having, as he says, nothing to do with this “inflationary painting.” Salome he calls “another of these cretins. Because every in-man must be gay nowadays. He celebrates this fully. In the beginning I thought, real honest, at least he’s painting what he goes for. I like that better than this pseudo-philosophical stuff … then it’s really better he paints fucking guys, and pretty damn colorful, because he finds it so colorful, too. But that is not enough stuff to paint 30 pictures with …”

Immendorff was glad that all these “Fast painters” were in New York before him. He’s now showing further paintings from his work series Café Deutschland in New York this October as, lie claims, “a cultural exchange.”

Translated from the German by Joachim Pente.

The Germans on Just About Everything by Hans Fuss

Christa Wolf’s City of Angels or, The Overcoat of Dr. Freud by ​Larissa Zimberoff 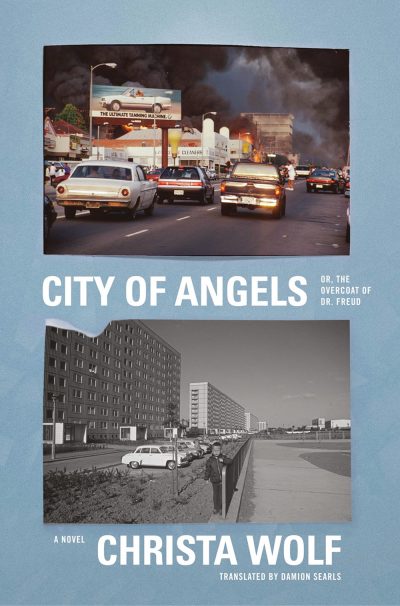 Imagine that the place you call home is no more, not just your house or apartment, but the entirety of your surroundings, including ideological ones. What if borders that were once maintained by thick concrete slabs and barbed wire suddenly disappeared?