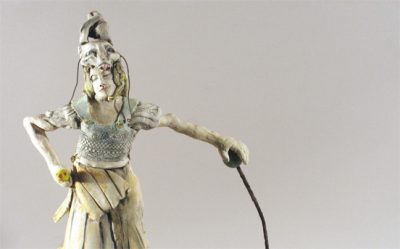 Ish Klein is both a filmmaker and a poet, so it’s no wonder that her second book of poems, Moving Day, seems to be infused with the light and movement of cinema (“Marquee me, the card/ entitled, MOVING DAY,” “I hear your voice beyond the screen.”) The poems in Klein’s latest collection contain a rare mixture of language. In this energetic, topic-hopping collection, Klein is somehow able to blend the formality of literary voices past (from “Be Here Hamlet”: “A puzzle how humans react to the loss of the life of a king,/ these royal feelings die,/ the awe in a way: a depth can die”) with a smattering of colloquialisms from every day life (In “Fairy Tales from the Web,” Klein speaks about the phenomena of online dating, “This is the magic of the machine./ The meeting and love trial and,/ if it works, the love made.”). Moving Day is chock full of exclamation points, which punctuate Klein’s poems (and the collection at large) with a sense of urgency.

Hannah Jansen You seem to have a fascination with discomfort. Moving Day is full of “hard, black-biled” language and “instants uneasy as amputees.” It’s haunting, ghost-filled, and gritty. Why do you think you return to that sense of unease throughout the collection?

Ish Klein I am often very uncomfortable because I still deal with my past in which senseless things have happened to me, and I have made many mistakes and have had misjudgments that bother me. A couple of things I deal with every day are anxiety and paranoia. Anyway I write from my state, but the state is getting better, I think.

HJ You create these structured, Shakespeare-infused poems that are oddly relatable. Can you talk about the distinct sense of formality that you’re somehow able to mix in with everyday speech? It’s such an eclectic and beautiful amalgam of language.

IK Thank you. William Shakespeare is my favorite writer, and I write him into my poems sometimes to have the voice of reason together with my own way of saying things. I try to have the voice of everyone I like in my work especially if they say things well or in an interesting style.

HJ Why did you choose to include the Friedrich Hölderlin epigraph?

IK I included it because I love Hölderlin and also because when I’m done singing I want to go home. The epigraph is from the poem, “Homecoming.”

HJ “The Underground Railroad” is one of my favorite poems in the collection. I love its simplicity and its quiet, desperate tone, “The jewel on the loop is elusive,/ the train on its track./ Are you ever coming back?” And I keep returning to that line, “On the floor/ the carpet is dirt plus glitter;/ they rely on each other.” For me, that line ended up being sort of the essence of the entire collection and the one that stuck with me after I put the book down. Why do you think that is?

IK Well, I think humans shine a sort of light on things. That is what we are good at: reflecting the beauty of the world. Really bright things light up the immediate area but they also can reveal the dinginess that is also in the situation.

Why you might think that is the essence of the entire collection is because I think that is a theme in many of the poems: building oneself out of broken pieces. Or that a person can make sense of things with reflection and move on or over or out of the dust and dark into something else. I suppose this will keep happening until one sees the totality from the center of a cone of light and can therefore see everything in terms of light. I am not at that stage yet.

HJ How important is it for you to read your poems aloud while writing?

IK It is essential to my writing process. I read aloud right after I write the first draft and then I revise to a rhythm. This is because I have to be able to say the lines easily which comes from accuracy and a sort of intrinsic rhythm in each line which I have to figure out.

HJ How does your filmmaking inform your poetry (or vice versa)? “Moving Day” struck me as particularly cinematic.

IK In filmmaking you can create tiny models and film them close up to suggest larger material. This is similar to selecting the accurate image in poetry. I like the notion of poetry special effects to my mind that would happen in syntax. That is where your mind has to follow the bend in the word order and figure out what it means exactly. My filmmaking and poetry help each other along. When the poetry is slow, I like to have a video to work on and when the videos are not coming, I like to work on reading and writing poems.

HJ The Poetry Foundation’s blog said of your films, “They’re like Roman Polanski films if Polanski worked in Pee Wee’s Playhouse.” What say you to that?

IK Well that sounds good, I would like to watch that sort of film. Is it accurate? Maybe. I’ve got friends and hobbies and things that I like to work on kind of like Pee Wee, and I’m also running from the devil so, yeah. It’s really more accurate than I initially thought.

Ish Klein, a graduate of Columbia University and the Iowa Writers’ Workshop, grew up in Long Beach, New York. She lives in Amherst, Massachusetts.

Hannah Jansen is a writer and poet living in Cambridge, Massachusetts. Her poetry and prose have appeared in Naugatuck River Review, Albion Review, and others.