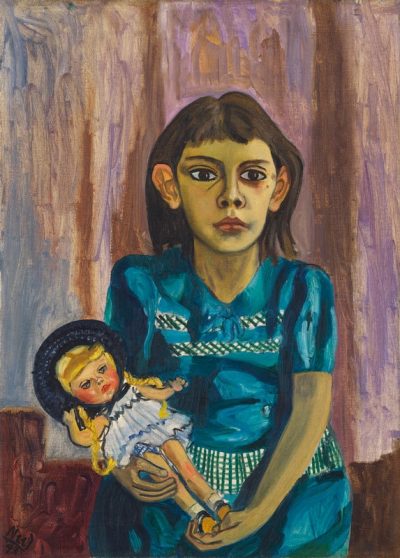 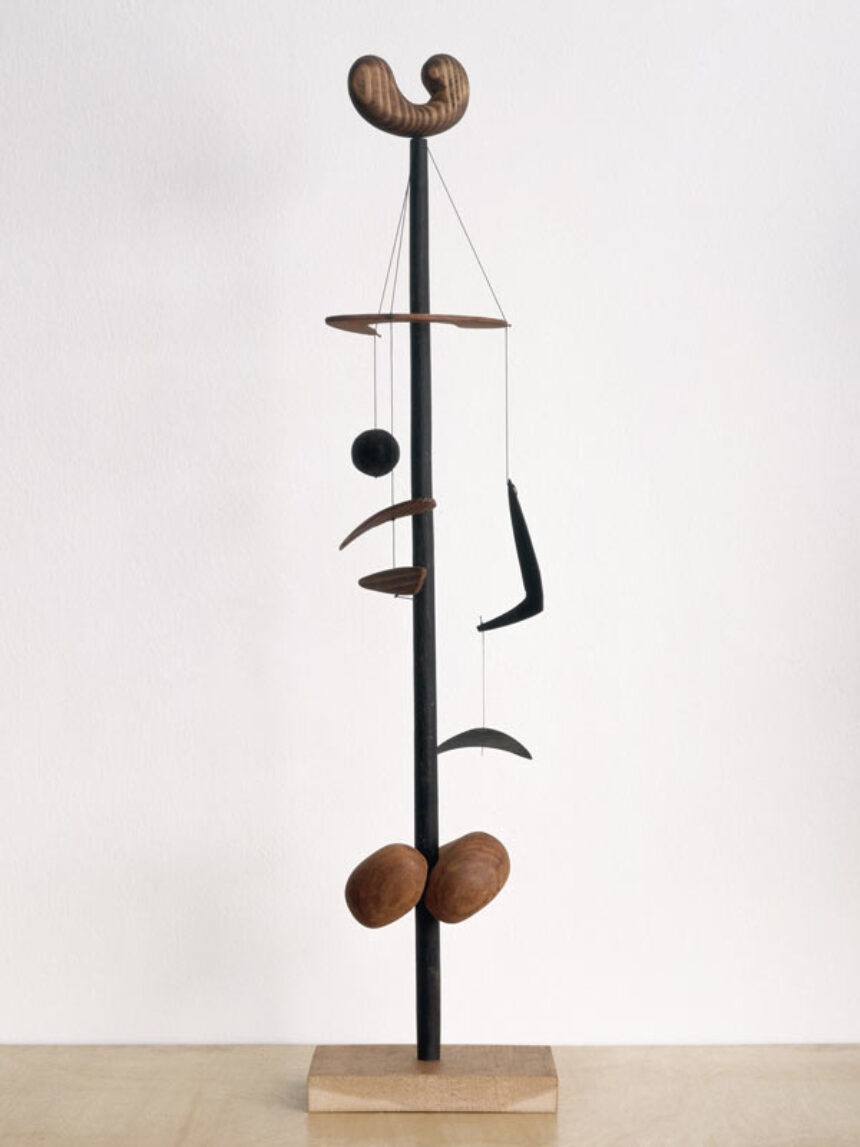 In a world of walls, Isamu Noguchi carved thresholds. Portals, gates, voids, and totems perforate the work of the late Japanese-American sculptor. Ostensibly, these works seem bereft of historicity or urgency, objects and surfaces that simply revel in their own form. Yet it would be a mistake to unmoor Noguchi’s art from its political and personal context, through which they often become, despite their tranquilities, laden with histories of systemic violence and afflicted selfhood. A new retrospective at the Noguchi Museum, titled Self-Interned, 1942: Noguchi in Poston War Relocation Center revolves around the artist’s decision to voluntarily enter Poston, Arizona’s Japanese-American internment camp in 1942, where he would stay for seven months in an effort to enhance camp conditions through design. The sculptures displayed span over forty years, and obliquely illuminate Noguchi’s confinement in a country that still today contends not only with presidential promises of mass deportation and registries, but also with increasingly relevant questions about how creative labor can embrace activism in a society rife with empty symbolic gestures.

Physical imprisonment emboldened a kind of artistic freedom for Noguchi, who ran a carpentry workshop and had access to a kiln while interned (the exhibit acknowledges that his experience was not representational of most internees). The survey is divided into two galleries, one devoted to works made during internment and the other to post-carceral output ranging from the early ’50s to the late ’80s. Although the internment pieces are scaled smaller, they share the same dumbfounding aura of originality as his later, grander inscapes. Made during his willful captivity, Untitled (1943)—a plinthed vortex of wooden shapes suspended from wires in a stilled orbit around a black pole—attests to Noguchi’s ability to fashion entire cosmologies out of what scarce resources were available. Another quietly galactic mobile, Yellow Landscape (1943),forms an astral terrain out of white magnesite, its dimpled, cratered, and shadowed surface not unlike skin. From carved wooden appendages, fishing weights droop from string, their silhouettes cast against the warped polygon. A landscape of a different kind is displayed in another room of the intimate, monastic museum: a blueprint the artist proposed for the camp, remade with swimming pools, baseball diamonds, galleries, and a cemetery. 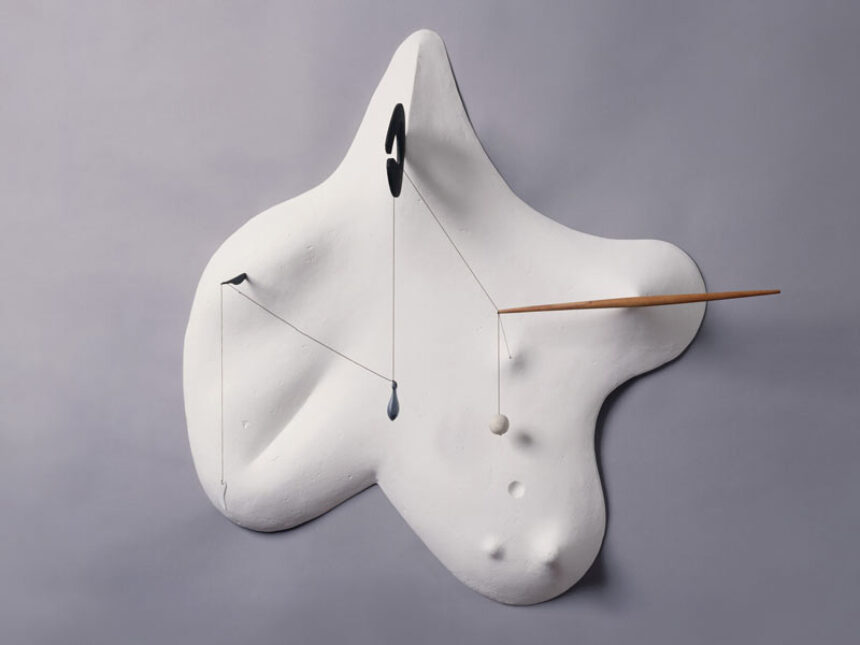 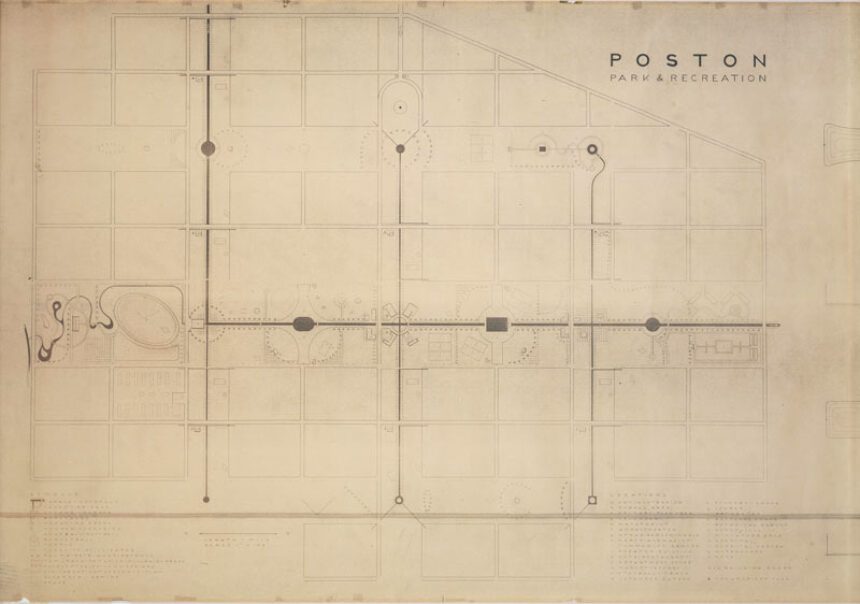 It’s no coincidence that whimsical, emotionally charged artworks are often forged in crucibles of staggeringly mundane bureaucracy. Almost as soon as he arrived at Poston, Noguchi realized his efforts were in vain, and he wanted out. He cited the lack of “companionship” between himself and other Japanese internees, a woe—among others—explored within several vitrines of archival documents that present Noguchi’s sobering correspondence with government officials, editors, and contemporaries. “Outside, it seems from the inside, history is taking flight and passes forever,” he wrote in a letter to Man Ray. “Time has stopped and nothing is of any consequence.” I felt similarly during my visit to the museum, which occurred during inauguration weekend. Yellow Landscape, hung on the wall, began to look like a hopeless, Dali-esque clock that reported a historical caesura. In the other room, a bronze Möbian sculpture, Void (1971), manufactured similar feelings of temporal estrangement. “I am always nowhere,” Noguchi once declared. He was reflecting on his mixed race, but one cannot extricate these words from his art, so bound with ideas of ancestral tension and spiritual eviction. Neither insider nor outsider, his creations are instead concerned with what waits on the other side.

One communiqué on display from a worker at the San Francisco Museum of Art proclaims that “Noguchi’s conception of art is one of universality,” suggesting that through Noguchi’s Eurasian roots and antifascist politics, his art transcends the traditional “propaganda value” found in other cultural efforts. But it could also be said that Noguchi’s art possesses a kind of exhilarating failure to transgress its own limitations as art, to escape. In fact, radical failure, rather than universal solidarity, may be the exhibit’s covert motif. Certainly Noguchi failed, on a municipal level, with his mission to transform the camps into a kind of utopia and to grant the internees artistic freedom. But measuring the “success” of any political artwork demands nuance and individual interpretation, and the fascinating parts of Self-Interned, 1942 are its interrogations of what protest art can be. In the context of the extreme displacement wreaked upon so many during wartime, doesn’t sculpting—both filling and generating space—become an act of protest in and of itself? His later works, abstractly realized with metal, wood, and stone, conjure visions of deserts; dunes, mesas, suns, and cacti fill the adjoining room, and by replicating natural forms, risk appearing passive. But what could be less passive than nature? 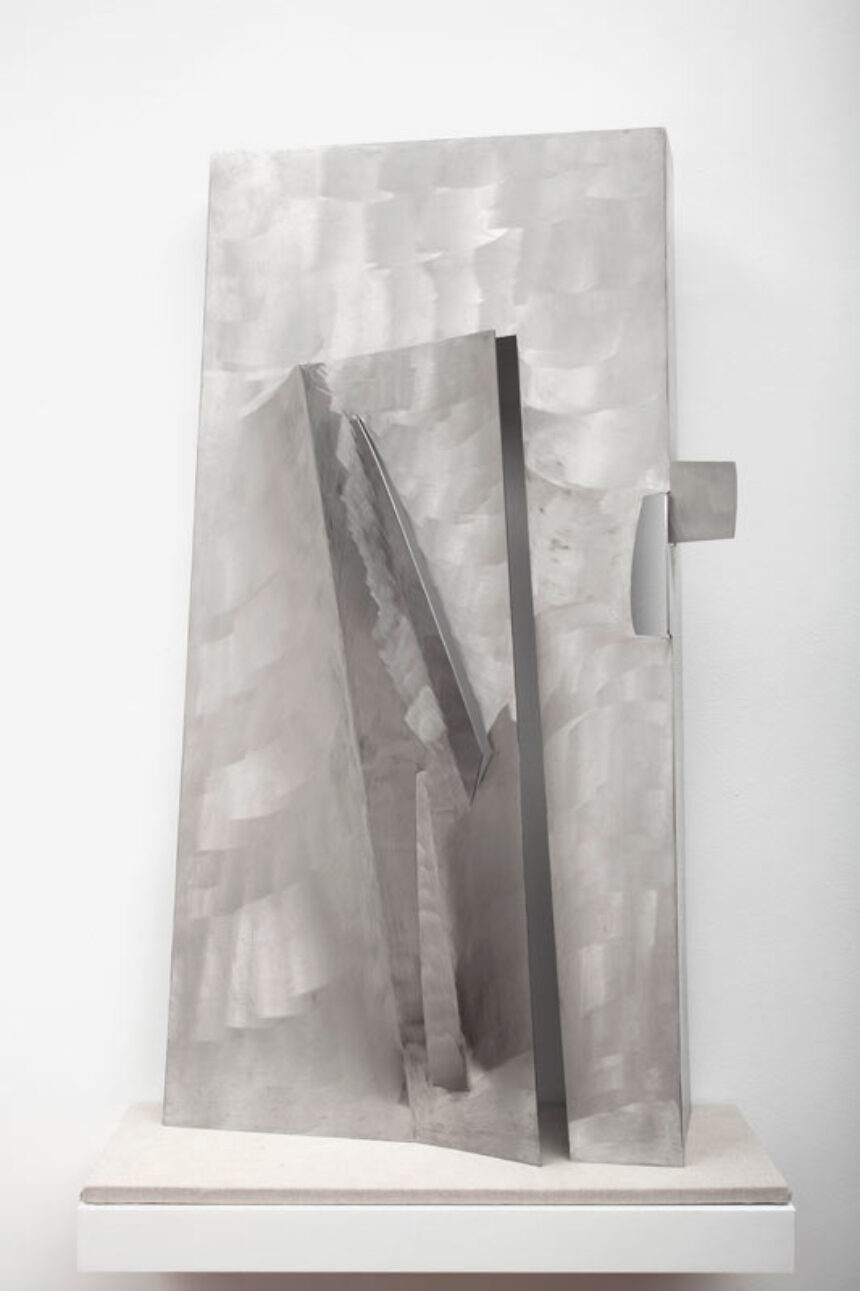 Persistently concerned with emancipatory environments, Noguchi would later design his public “playscapes,” subversions, perhaps, of what the U.S. government, seventy-five years ago, termed “relocation camps.” They were conceived in relation to human beings, but this survey suggests that Poston was where Noguchi discovered how to relocate personal boundaries of art, protest, and heritage. Four decades after leaving the camp, he built his own museum. Unlike his America, or ours, it is a place that welcomes all.

Self-Interned, 1942: Noguchi in Poston War Relocation Center is now on view at the Noguchi Museum, Queens.

Zack Hatfield is a graduate student in NYU’s Cultural Reporting and Criticism program. His writing has appeared in the Los Angeles Review of Books, Artforum.com, and The Brooklyn Rail. 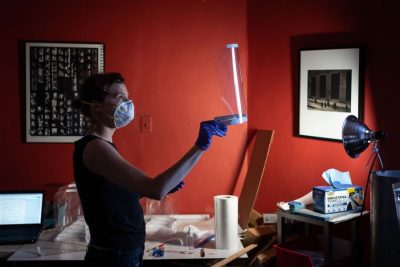 3D-printing face shields to combat the shortage of PPE for hospital workers.