In Sight: An Interview with Bahman Ghobadi by Montana Wojczuk

Bahman Ghobadi’s film, No One Knows About Persian Cats, is a story about a struggling Iranian band whose members become unwitting political activists. He talks to Montana Wojczuk about the music scene and the difficulties of shooting a film in Tehran. 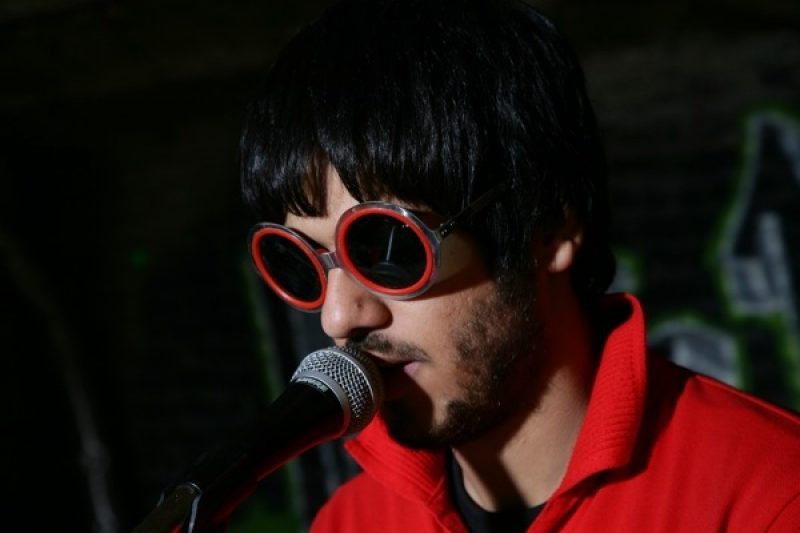 Still from NO ONE KNOWS ABOUT PERSIAN CATS, courtesy IFC Films.

Music is a dangerous art in Iran. Director Bahman Ghobadi, an Iranian from Kurdistan, (A Time For Drunken Horses, Turtles Can Fly, Half Moon) sets his new film, No One Knows About Persian Cats, in the basements of modern-day Tehran, where a group of underground musicians struggle to put together a band. Iran has forbidden public performances of music, and especially Western music, for almost 30 years. The young protagonists of the film, Negar and Ashkan, are indie rock musicians looking to start a band and get passports so that they can leave Iran and play abroad. During the musical sequences, Ghobadi shows us stunning footage of Tehran itself, a “nervous” city vibrating between anxiety over its future and the expansiveness of artistic passions. The film was Bahman’s “only chance” to show the musicians he’d come to know and admire, and it may be a long time before he gets another permit to make a film in Iran. Three weeks after filming (on a borrowed permit) the film’s writer and Ghobadi’s fiancee, Roxana Saberi, was imprisoned. It was not until an international outcry that she was released.

The following interview was conducted mainly with Bahman Ghobadi, with Sheida Dayana translating. For more of Roxana Saberi’s experience as a journalist and screenwriter in Iran, check out her new book, Between Two Worlds: My Life and Captivity in Iran, published March 30 by Harper.

Lincoln Center recently showed a retrospective of Ghobadi’s work and No One Knows About Persian Cats, which won a Special Jury Prize at Cannes, is currently screening at the IFC theatre in New York. The film premieres in Los Angeles on April 23.

Montana Wojczuk How would you define yourself as a filmmaker? This film seems part documentary and part narrative drama.

Bahman Ghobadi I’ve always said I’m always first a window-maker and then a filmmaker. What I do is I picture the window and give the point of view to the audience. Whoever comes and stands behind me sees the story as though they were there.

I had to be hidden like the people in the film because I was making a film about a hidden subject— knew I was not going to get a permit for this film, so I didn’t even ask for it. Every location I entered I tried not to enter again, because I didn’t want to get these kids in any kind of trouble. I didn’t want the places they had organized for themselves with such difficulty to be endangered. I was always afraid the rushes would be confiscated by the police. So I was making copies, by the end of the day two or three copies, and hiding them in different places. A few times I had to lie because I didn’t have a permit—I was using someone else’s permit and I had to say I was making a film about drugs, which was really not an issue in this film, but I had to lie to the police. They were under the impression that this film was about drug dealers. So the scene where you see police coming in and arresting people for making visas—they were under the impression that it was about drugs. I had to fake some dialogue for them, just to keep the film rolling. But later in post-production I got rid of whatever dialogue they were using and added my own.

What really made me feel bad about making this film was that I was confronted with a world of pain and suffering and the difficulties of others, and I knew I only had one chance to make a film about it. And I knew I couldn’t go on and make more films about all the problems these people had.

MW Did this sense of danger shape the story itself?

BG Prior to shooting, I actually interviewed all of these musicians for two or three weeks and shaped the film around their responses. The story of Ashkan and Negar actually came later. I was in the middle of these interviews when I heard their story and that they’d recently been released from jail, wanted to leave Iran, and were looking for a band. That’s when I decided to make this the centerpiece of my film. I’ve been trying to stay truthful to reality.

I didn’t actually know the ending, even toward the very end of making the film. In Tehran—or in Iran—once every two weeks there are parties like this, and the place is invaded and they take the kids, and in the middle of all the chaos there are accidents where kids fall down or jump out the window, and they’re injured or they get killed. So I decided to bring the spirit of reality—incorporate it into the film. If the film is 106 minutes, I’m going for 104 minutes of music and laughter and humor and two minutes of reality, so you don’t forget what’s really going on.

MW Are you hopeful that these kids affect some kind of change?

BG I’m torn between this hope and hopelessness. And I think the film vacillates, as do real situations—between life and death or good and bad—and I always have these contradictions within me. Askhan and Negar become a symbol by the end of the film for a bigger picture. The future of music in Iran has two options: suicide, as Negar does at the end, or Ashkan who comes in with an oxygen mask at the end, which is my solution. Either get help, get oxygen and breathe and live on, or commit suicide like Negar.

After we came out with my film Half Moon, the government of Iran accused me of being a separationist. Whereas I was not a separationist, and I did not intend the film to have that kind of message. I wanted to make a film called 60 Seconds About Us, and I told myself that I should not make it until I had complete knowledge about the city of Tehran and what’s going on around me. So I wanted to first get a better view of Tehran and make a very different kind of film.

It’s important that you don’t look at this picture as an edited MTV clip or something like that. My intention for this film was to make cinema and, within that cinema, to show a sociology of the city of Tehran. Most studios want action, but I didn’t want to limit myself to showing studios and close-ups of different instruments. No, instead I wanted to get out and be able to show the real Tehran in this film. The real Tehran is nervous, it’s contradictory, it’s full of energy, though sometimes negative energy. And all of this is shown through the music. And what I was doing was trying to find pictures that matched the words of these kids. So I was doing sociological cinematic work.

I intended for the film to be a piece of music on its own. I knew that it was my one and only chance to make music about this underground world, and I knew that I was focusing on a few things: one, to show the city of Tehran and its sociology; and two, to show the story of Askhan and Negar; and three, to be different in this film than any other film made about Iran. 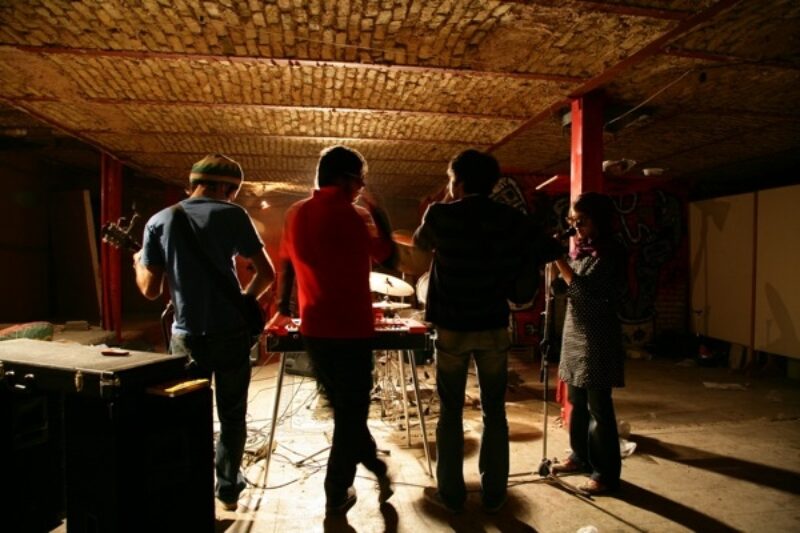 Still from NO ONE KNOWS ABOUT PERSIAN CATS, courtesy IFC Films.

MW This question is for Roxana. Did you meet any musicians or artists while you were in jail?

Roxana Saberi I didn’t meet artists in jail, but I did meet people who were there because they tried to exercise freedom of speech. There were two women who were arrested because they stood outside a bakery and shouted “we want bread!” My last cellmate was the spokesman for a cultural/spiritual group that the government claimed was a cult. She had done some interviews with foreign media, and the next day she was accused of propaganda and arrested. I don’t think it’s that different from the people you see in the film. They were there because they were trying to pursue their basic human rights, which we take for granted here but which they’re struggling for.

MW Can you go back to Iran after making this film?

BG Technically I could go back, but I choose not to because there are only two options left. One is real jail, and two is being imprisoned at home and not being able to get any permits for making films. So I’ll be here probably for the next couple of years, and I think the situation there will probably improve within the next few years. I don’t have a home now. I feel homesick and that brings a negative energy into Roxana’s life. I don’t know where to call home.

MW Why did you decide to include so many kinds of music in the film, and what is the younger musicians’ relationship to the traditional music?

RS I wanted to my audience to be familiar with the different kinds of music that are going on, whether blues, hip hop, rock, rap, metal. And with Askhan and Negar, usually these kids have a good knowledge of traditional Iranian music. They are very familiar with it. They come from that base.

MW I’m curious about the sections while the songs were being performed that showed Tehran. Was that something you decided to do while you were shooting, or in post-production?

BG That was pre-planned, actually. I knew that this was what I was going to do. I wanted to show this city with its potential and its energy. Everything I had felt was missing in previously made films about Iran. The first scenes of the film also start with this.

BG That’s the contradiction. Once you live in the society, you have no choice but to follow the current and end up there. If you pay attention to the lyrics, you see that it’s very much about the realities of the society.

MW I’d like to know more about Negar’s progression. I was really surprised when he started singing! He seemed like a salesman at the beginning, and at the end he is unmasked as an artist.

BG What I wanted to show is reality. I was as shocked as you are when I was sitting there, behind these motor-taxis. And what I observed is that they are usually intellectuals, artists—they’re poets and they are book readers. And I wondered why am I, Bahman Ghobadi, an artist with a recognizable name, while they are driving taxis? What does it say about the society?