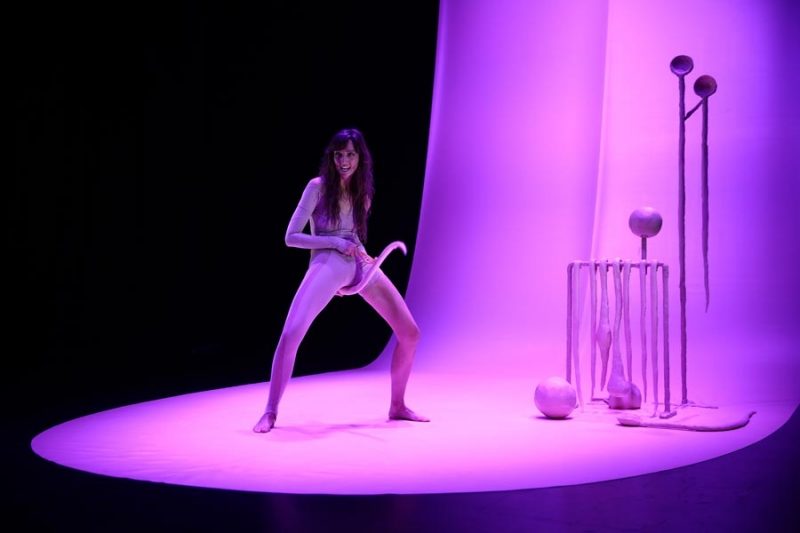 Ieva Misevičiūtė performing Tongue PhD at The Kitchen, 2016. All images courtesy of the artist. Photo by Paula Court.

I slide into the mouth easily, taking my place alongside all the others. We are not crowded because the mouth is large and its moist tissues are elastic. I have never seen a mouth like this before. It’s not Jagger’s sardonic sex mouth, or Beckett’s disembodied Not I mouth, or Bosch’s ever-gaping hellmouth… This mouth is silicone-smooth, pinky-beige, and very clean. At the center, a giant tongue lays gently tensing, its long base attached to places unseen––the jaw, the base of the skull, the hyoid bone. I hear water. No, not water… wetness. The sound of wetness is all around us, and though the night outside is unseasonably hot, the black box of this mouth feels cool.

“The mouth is the first theatre,” a voice announces.

In Tongue PhD––Lithuanian-born, New York-based artist Ieva Misevičiūtė’s latest solo performance, which had its US premier at The Kitchen this September––the muscular movements, animal ancestry, and (countless) metaphoric permutations of the tongue are explored and presented in the style, oddly enough, of a PhD dissertation. For emphasis, copies of Misevičiūtė’s dissertation outline––still pending approval by the “International Cephalopod Academy” (a reference to the anatomical resemblance between the human tongue and an octopus’s tentacle)––are passed out to everyone in attendance.

If Misevičiūtė’s dissertation has a proper thesis, it surely centers on the role of the tongue “as a bridge between intelligence and madness,” recognizing the organ’s integral role as a vehicle for rational inquiry and its more carnal function as a sensorial slip-and-slide.

The academic conceit is meant to amuse, and the skewering of overly serious and arcane forms of scholarship can be seen as one of several unifying threads throughout Misevičiūtė’s activities. For further evidence, see the 2012 performance of 27 Gnosis at dOCUMENTA (13) and a 2010 art historical “lecture,” The Complete History of Obdurance Art from 1860 Till the Present in 30 Minutes, at the Center Pompidou––both performed with partner, fellow provocateur, and Tongue PhD’s script co-writer, Michael Portnoy. 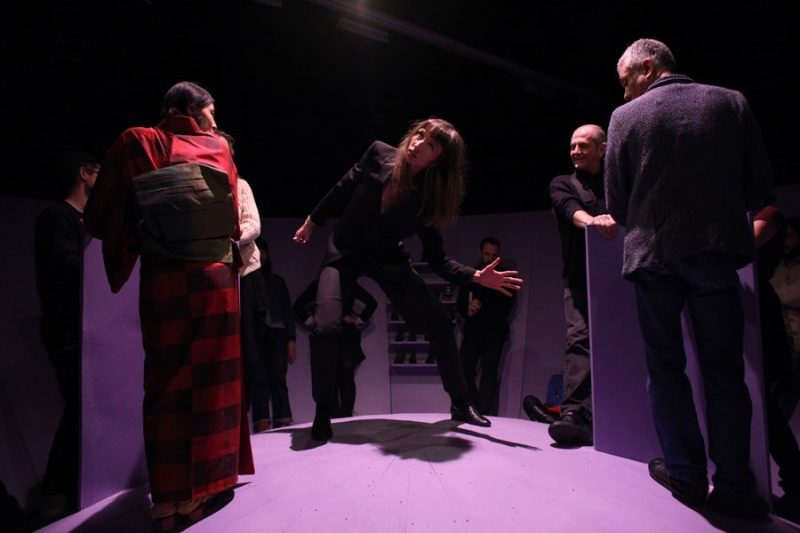 Unsurprisingly, Misevičiūtė spent her early years working as a clown, and many of the devices used to achieve circus theatricality––physical comedy, masks, prosthetic limbs, extreme facial contractions, feats of bodily virtuosity––also serve the artist well in this production. Early on, she appears, bathed in red light, with arms outstretched in an accentuated gesture of openness. Her nimble bones clad in a pink, one-armed, one-legged bodysuit, Misevičiūtė isolates her ribs and stomach and begins to rotate her hips to a funny keyboard tune. She shows us the tip of her tongue and the dance starts to feel like the imitation, or the mime, of a seduction. Her movements rapidly give way to exaggeration––the tongue juts in and out of her mouth and her impossibly long arms wrap backward around her torso. It is, as with much of the night’s actions, disquieting in its absurdity. 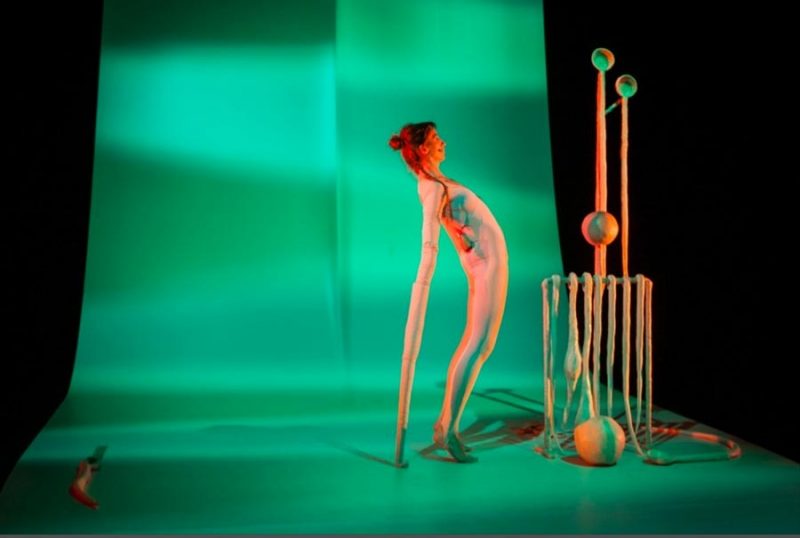 This project also relies heavily on the emotional and bodily exertions of Butoh, as well as physical mimicry, dance, and sculpture. At one point, a long silicone figure that resembles an octopus tentacle (again, the tongue’s ancient cousin) becomes a whip in Misevičiūtė’s hands, then a tail, then a floppy phallus, and then (perhaps, inevitably) a spiky erection, which the artist proceeds to mount and stroke gleefully. Finally, the tentacle becomes a shapeless extension of Misevičiūtė’s arm––lashing toward the roof of the giant mouth and pulsing with her frenzied movements.

Tongue PhD ends with Misevičiūtė impossibly balanced––ever the circus performer––on a pink, skull-sized ball, her forehead and nose partially obscured by a helmet that is also a mask. She reaches for another of the tentacle/tongue sculptures and pulls its long, shiny form up to rest directly on her face––finally, and intimately, bridging the human to the animal, the articulate to the inarticulate, the conscious to the unconscious.

Amber Power is an arts writer and BOMB’s development associate.