Hidden Histories: Mary Kelly: The Practical Past by Jessica Holmes

From the laundry room to the streets.

Nov 15, 2017
Facebook Twitter Email
It Is Almost That: A Collection of Image+Text Work by Women Artists and Writers by Cameron Shaw 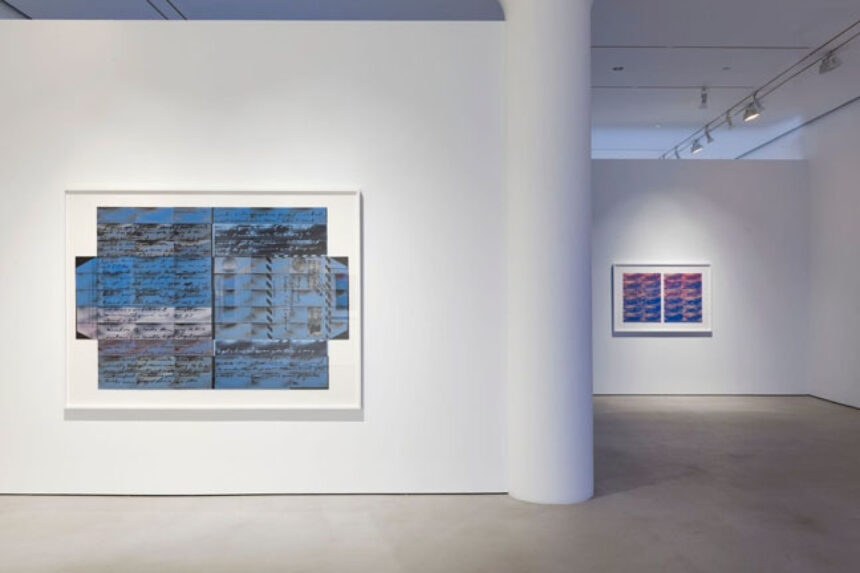 “The personal is political,” a phrase popularized by the writer and activist Carol Hanisch when she penned a polemic by that name in 1969, became a familiar rallying cry for the second-wave feminist movement in the early 1970s. Though over the years its meaning has been misinterpreted, and at times intentionally coopted for purposes entirely different from its radical origins, at its core “the personal is political” might be summarized as such: that the actions, relationships, and behaviors that compose one’s intimate life are of significant consequence in the power structures constituting the greater systems of a society and culture. Very few U.S. artists have embodied this concept as fluidly and as consistently as Mary Kelly, whose current exhibition, The Practical Past, at Mitchell-Innes & Nash is both a reckoning of the artist’s own life experiences and a consideration of how these fit into the larger rubric of history.

Kelly’s work first gained her both renown and notoriety in the 1970s as she made and expanded upon her Post-Partum Document (1973–79), a project that found her meticulously chronicling the first six years of her son’s life. The work was both an intimate record of a new mother’s unfolding relationship with her baby and an exacting account of the minutiae of childrearing that was, at the time (and still is), primarily a woman’s domain. Through Post-Partum Document, Kelly analyzed and exhibited everything from the child’s language development to the stains left behind in his diapers, revealing the (unpaid) labor, at once tedious and intense, that makes up much of so-called “women’s work.” 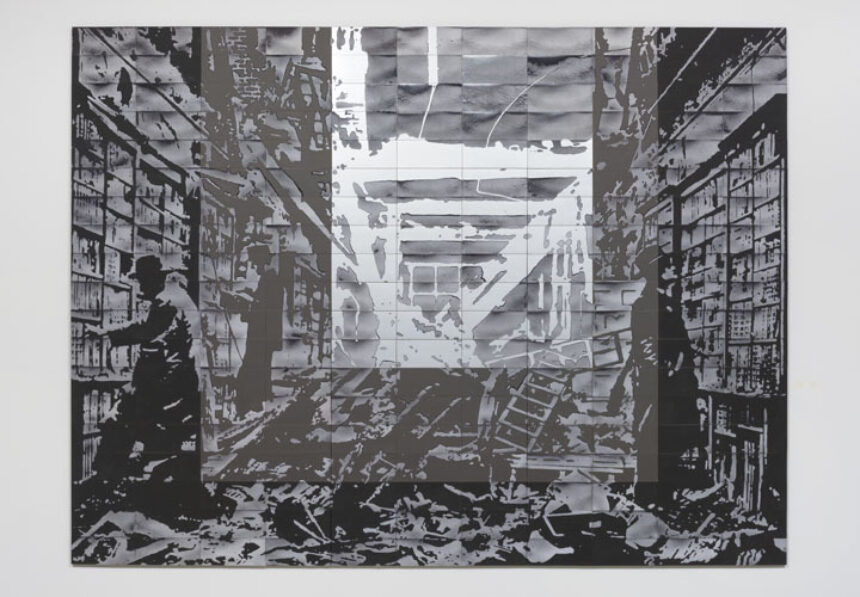 In The Practical Past Kelly’s probing of the concept of women’s work persists. Every object in the show is composed of accumulated lint from a household clothes dryer, a medium with which Kelly has worked for nearly twenty years. The idea of women’s work—that is, the tasks performed within the domestic sphere—is a concept that could sound hoary to a contemporary audience if it were not for the fact that the presence of dryer lint as a medium somehow still immediately marks the objects as specifically woman-made. The substance itself illustrates how deep our cultural conditioning runs.

Each work is rendered by a process-intensive method whereby Kelly uses the dryer lint from the lint screen of her own clothes dryer, arranged into patterns she creates by pressing a laser-cut sheet into the screen to mold the accumulation. These small “bricks” of dryer lint are then fitted together to assemble her desired image, resulting in a piecemeal quality that echoes a patchwork quilt. Given the woolly properties of the material, the images that form from it are blurry, as if the viewer is trying to make them out through foggy cloud cover. 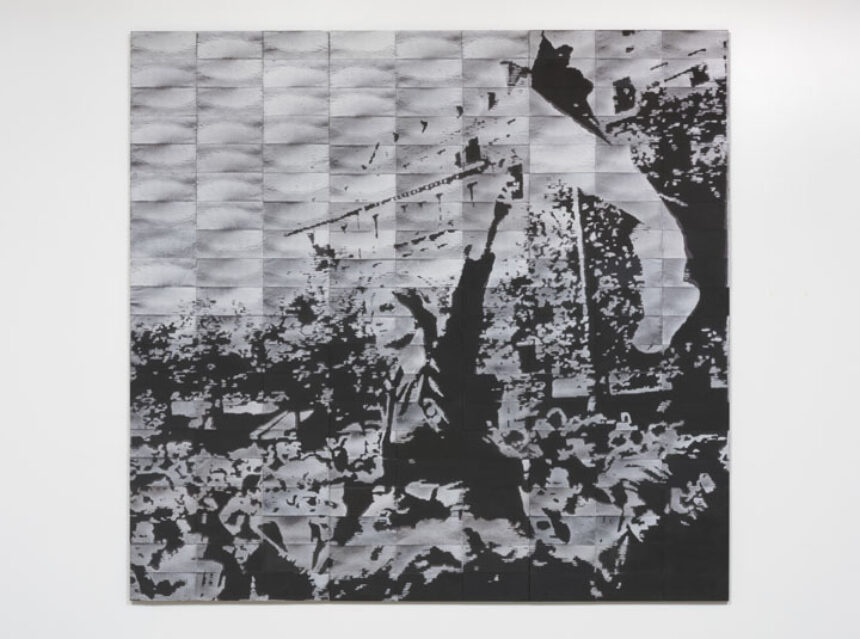 Kelly draws upon both her private life and also pointed historical sources as subjects. Several works depict letters she received from friends in the United States in the early 1970s when Kelly was living in a British, all-female commune. The handwritten script is not always easily legible, and viewers have the sensation of trying to read illicitly a missive never meant for their eyes as they squint up close to discern its words. In Tucson (1972) one can make out the writer’s thought that, “Americans are too angry to handle political responsibility, hard enough just to survive and keep your head.” It is clear from the letter’s context the author was speaking about the Vietnam War, but one cannot help dwelling upon the sentiment in our own contentious times.

The centerpiece of the show, Kelly’s Circa Trilogy (2016), features three era-defining moments from the past one hundred years. Circa 1940 recreates the iconic image by an unknown photographer of three men perusing the books remaining on the shelves of the destroyed Holland House library in London following the 1940 Blitz. Circa 1968 shows a scene from the 1968 student uprising in Paris, of which Kelly took part, while Circa 2011 recreates an image from Tahrir Square in the midst of the Arab Spring. These oversized works (each measures approximately eight by ten feet) are all overlaid with projected “white noise” (like “snow” on a TV screen when the picture cuts out) that further abstracts the already fuzzy representations. Through them, Kelly situates herself directly within the chronicle of Western history, as she also attempts to weave a larger picture. Taken as a whole the results are compelling, if somewhat disjointed. The sheer breadth of history to which she alludes, both U.S. and European as well as to the contemporary Middle East, is a lot to distill, and viewers might find themselves responding more purposefully to individual works. 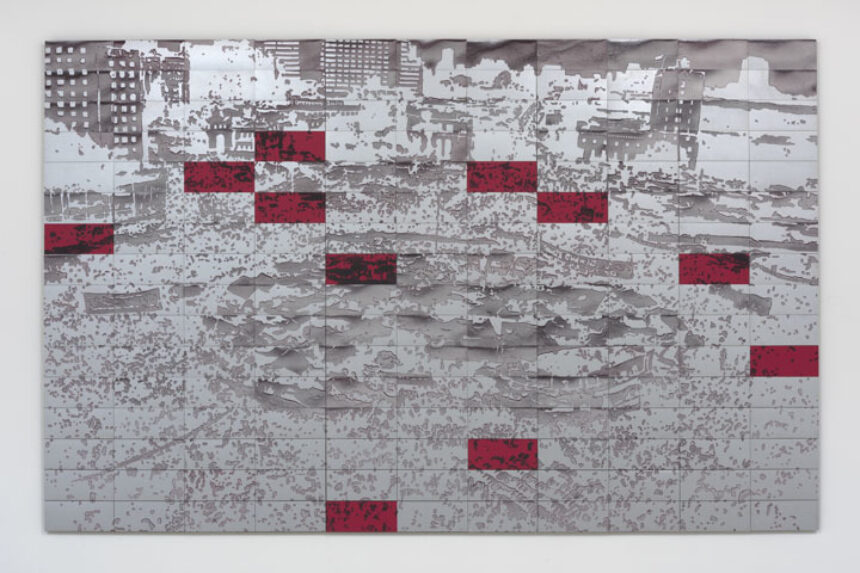 The Practical Past arrives at a moment when U.S. culture teeters on a precipice. Each recent day seems to reveal new allegations of sexual assault by men of women in the arenas of Hollywood, Silicon Valley, the art world, publishing, and more. Meanwhile, a self-admitted sexual abuser remains in the White House while the government insidiously continues to strip away or repress abortion rights, domestic violence protections, and equal pay laws. It is impossible to separate these circumstances from the experience of seeing this exhibition, and to consider in what ways feminism has played a role in our recent past, and how it can function in the present state of affairs.

The Practical Past continues at Mitchell-Innes & Nash (Chelsea) in New York through November 22, 2017.

Jessica Holmes is a writer and critic based in the New York metro area. Find her work at http://www.jessica-holmes.net.

And Everything Tasted of Soap by Jane Yong Kim 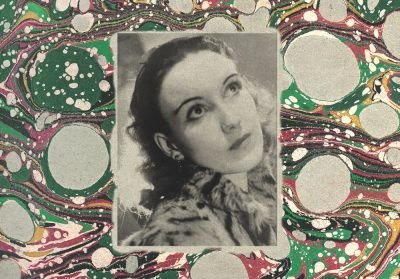 On Barbara Comyns’s Our Spoons Came From Woolworths