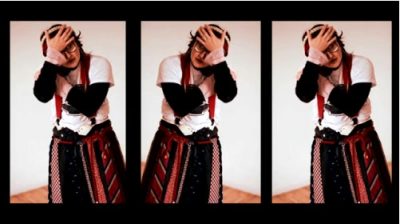 She dyed her hair blue, which in turn turned her eyes brown. But the blue hair was only temporary. You might say transitional. Transitional. For shortly after she dyed her hair blue it all fell out. This should not have surprised Helen. It said so on the bottle of dye. It was a warning, a caveat, a cautionary note. It said: Let it be known to all those who use this product: the effects of this dye are only temporary, yet they are everlasting. Your hair will never be brown again, and you will most surely be bluer than your eyes. So Helen knew full well what she was in for. The writing was on the wall—if you consider the side of a bottle a “wall.”

So this is where our story begins. With Helen. Brown-eyed, hairless Helen. Helen, who was once said to be beautiful. Only once, though.

Brown eyes aren’t so bad, but blue eyes are nicer. I should know. I have blue eyes. I also have brown hair, though I have already lost much of it (I do have more hair than Helen, though). But let’s not talk about me, let’s get back to Helen.

Oh, I almost forgot—when she was four years old, she saw her big brother urinate. He was standing up and it was coming out of a little hose.

Helen’s father was a mass murderer. He killed many people. People he didn’t know (personally). He was a sniper. He had been working as a clerk on Wall Street. One day he did what he had to do. He brought a rifle to work. He wrapped it in a newspaper and told his co-workers it was a fish. Then, at lunch hour, he went up to the roof of his building and started shooting at lawyers, bankers and brokers. How did he know they were lawyers, bankers and brokers? He knew.

Before I continue I’d like to mention an interesting coincidence: I work on Wall Street.

Another hit of useful information: Helen dyed her hair blue some time before the advent of the punk phenomenon, so her motivation for the action can’t be explained away as mere faddishness.

Why Helen at all? Why choose Helen as the subject for a story? Perhaps because I loved her once, a long, long time ago. But that, of course, is a lie.

Even if I were capable of loving a woman like Helen, I know there would be something bigger than the both of us standing between us. I don’t know what, though. Perhaps my career, perhaps hers. Her career? She wanted to be an opera singer. A bald soprano? You said it, not me.

And besides, she was a contralto. In the loosest of terms, though. Because she couldn’t sing. And I mean it. I write better than she sings. That should tell you something.

I heard her try Wagner once.

Wagner is an acquired taste. Hitler acquired it, for instance. When I heard Helen sing “The Ride of the Valkyries” with pretzels on her head I thought to myself, if she had only been around then, she would have been America’s secret weapon. More powerful than a Tokyo Rose.

Helen’s father is serving a life sentence. And thinking about him makes me think. About crime and punishment (Helen’s father was no idiot, though he was a gambler). Helen’s father killed lawyers, bankers and brokers. He stayed close to home, or should I say close to work. He lashed out at his most visible oppressors. He took the law into his own hands because nobody else would. Now I’m not saying he was right. It’s a complex question.

All this has to have an effect on a girl like Helen. Being separated from her father at so early an age. Seeing her brother urinate. Getting her heart set on a career as an opera singer when she can’t sing for shit, if you’ll pardon the expression.

Question: Is that why she dyed her hair blue?

Question: Will Helen ever be the same again, now that she’s different?

Let’s put Helen in a hypothetical situation. Her husband has just come home from work. For this we’ll have to assume that Helen is married and that her husband has a job. Helen’s husband comes home and says, Hey baldie, you won’t believe what happened today. I was heading back to work after lunch when this crackpot started shooting at innocent bystanders from a roof. He just missed me by the skin of my teeth (he bares his teeth at her).

Can you be sure they were innocent? Helen asks.

Let’s try another example. Helen goes to an audition at the Metropolitan Opera House. She is greeted by Music Director James Levine. Levine says to Helen, Can you do Wagner? That’s just what Helen had been hoping for. She gets out her pretzels and lets loose with “The Ride of the Valkyries.” Levine cuts her off. We’re not doing Wagner this season, he says. Can you do Bellini?

Helen breaks into tears. I was so busy learning Wagner, I never bothered with any other composers, Helen admits.

Listen toots, Levine says, if you’re Birgit Nillson or Kirsten Flagstad, then you can specialize, but anyone else, and that means you, has to be able to do the whole megilla.

So Helen buys the score to Norma.

And I have to listen to her practice, because I’m playing the part of her husband in this sequence. Finally it gets to be more than I can take. So I call up Levine and give him a piece of my mind. Why do you go and get her hopes up? I say. I’m the one who has to listen to this shit.

Just be patient, he says. These things take time.

I call up the Met box office and cancel my subscription.

(I want to remind you that the preceding incident was a purely hypothetical situation, and, while the passage contains many truths, there are no facts. For instance, I could never afford a subscription to the Met, even if I wanted one.)

By this time I had become strangely attracted to Helen, perhaps because I had created her, perhaps because she was the most beautiful woman I had never met. Could it have been her impulsive nature, or her wild eyes, or the way her bald head shone in the moonlight?

But after a while my feelings changed. Because Helen changed. She realized that opera wasn’t working out for her. At first she was depressed, but after a while she set her mind to other conquests. She got a job selling aluminum siding over the telephone. Her rap was convincing and she had the statistics to back it up. She made a mint.

That’s when I began to notice the more significant changes in Helen. She was no longer the sweet, innocent, bald contralto I had grown to love. She had become a successful entrepreneur, and she was determined to become even richer, no matter how many of us she had to trample on her way up the ladder of success.

Yes, Helen changed. But then, I guess we all have to change at some point, don’t we? Sometimes I think it would be nice to have lots of money myself. But more often I remember that the sound of Helen butchering Wagner was so much nicer than what I’m hearing now.