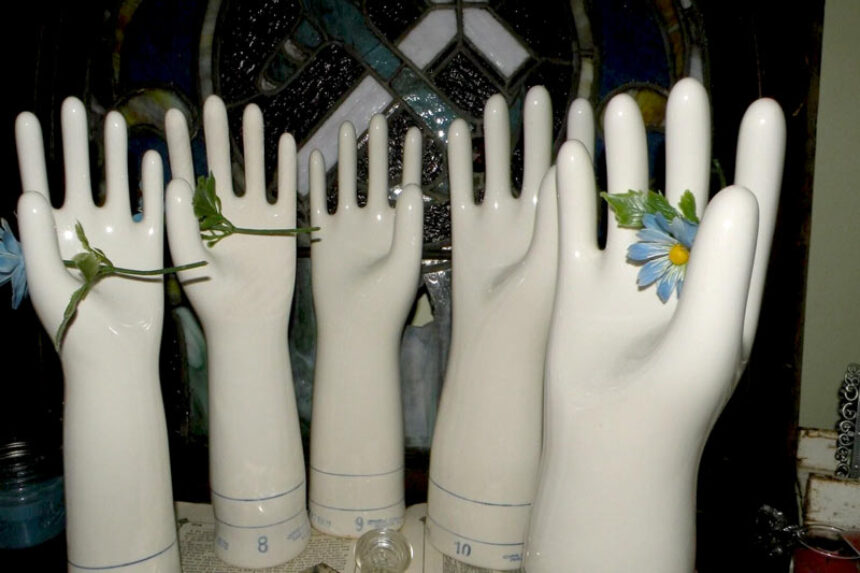 It was once a happy city; we were once happy girls. They used to say: do this, do that, and we did it, we turned our hands, we drew, we laughed; they called us the faithful city, the enchanting city. We had proud eyes, strong hands. People thought we were just girls then. We used to touch the fig tree in the garden and say, “This is the castle.” And then we walked to the black sculpture and said, “This is the devil.” And then we’d go back to the orphanage door and say, “This is the mountain.” Those were the three things: castle, devil, mountain.

That was the triangle you could play in.

And there was the hall mirror.

And our summer dresses.

And the night they changed our sheets and it felt so good to climb into fresh-smelling beds.

And the days we got sanjacobos for lunch: breaded fried ham and cheese.

It was as if we were all one mouth eating the ham, as if our cheese was all the same cheese: wholesome and creamy and tasting the same to all of us. The cheese was happiness. But then we had class after lunch, and it was long. And the time between lunch and class, and then between class and break time, passed slowly, suspended in the air.

When class was over we liked to play. We’d sing as the jump rope hit the sand with a dull crack. To get in the circle you had to pay attention, had to calculate the jump rope’s arc, its speed, adapt your rhythm to the chorus. Once you were in you felt exposed, tense, as if each time the rope cracked down, it hit your mouth, or your stomach. With each thump you went around the world, instantly, quick as lightning; you had to make it. And hide-and-seek: you’d crouch behind a tree and then become part of the tree; if you didn’t move you were invisible. You had to stay there, kneeling, feeling the coarse playground sand digging into your knees, leaving marks on your skin, until someone called your name, and then you had to run to base, where you were safe. What a strange word: safe.

One afternoon the adult said, “There’s a new girl coming. Don’t be scared.”

We didn’t know any other way to love.

We went around preparing places, loving everything we could imagine, everything before our eyes. Some of us thought she’d be big, others said she’d be our size; some said she’d be very pretty, others didn’t think so. Her first triumph was this: we were no longer all the same. We, who had been tamed, we, who made no distinctions among ourselves and our bodies, we, who all wanted the same things, were no longer all the same. Suddenly there were hands that we didn’t recognize, and we became strangers. From one second to the next something had broken: our trust. It was as if, in a short space of time, we had all become aware of so many things, and they were sad, those things, so different from multiplication tables, from learning c from k, from our natural science book. Those things hurt, they flowed down like a river from upstairs, where the principal and the adults lived.

Then one day, a day like any other day, she actually arrived.

We were on our way back from a field trip and the miracle was performed. There was nothing special about her. The door opened and there was a girl, dark, pretty but not too pretty, with slack hands, shoes that weren’t like ours, silhouetted in front of the statue of Saint Anne, almost as black as her, a shape that neither spoke nor smiled, with a doll in one hand and a stick in the other. So close, and like us, the same height.

“This is Marina,” they said.

And yet she didn’t look like us. She had dark-girl eyes. How could we describe her? How could we say, “This is what Marina was like the first time we saw her”? We might get tired, we might start to describe her and then have to keep going back to clarify things, and nothing we said would be right except for the feeling that you couldn’t really see all the way inside that girl.

She was always on alert. Always.

Her eyes squinted when she was thinking, as if she herself disappeared into those slits and fed off her thoughts. And when she got up, she’d grope along, touching things, heavy, and yet seeming like she was about to take off and fly.

“I don’t know what to do with that girl,” the adult said.

And we didn’t know what to do with our love, either; it was so heavy.

It would sneak up by surprise, just when it seemed like it wasn’t coming back. Suddenly, in a flash, there it would be. We’d be copying a passage from a book and suddenly realize that our lines were all crooked, or that we’d skipped a word, or that we’d made an ink stain, or that we’d smeared the bottom of the page with our arms, or that we’d accidentally creased the paper. And Marina had been there watching over that mistake.

Everything around her was contaminated, and so were we.

But then at recess, out on the playground, everything went back again. Marina shrank and we grew. She stood alone, with her doll, by the statue of Saint Anne, watching us. Or was it the doll who was watching? We didn’t know who the doll really was. Because sometimes she looked like Marina, and she, too, seemed to have a hungry heart, and clenched fists held close to her body, and she, too, was silent even when invited to join in; and she nodded her head back and forth, something we’d never seen a doll do before. And she seemed persecuted and excluded, too. If you sat her on the ground, from above she looked like a little girl and we were the adults, and we thought that we actually were a little like that, a tiny head you could hardly see, a head you had to lift by the chin in order to see its face. Even her face was like ours, though wary and full, like when you got scared.

“Her eyes are broken, that’s why she can’t close them. You have to lick her eyeballs so she can see or else she can’t see.”

Marina held out her doll; that was the first thing she’d said to us. We stuck our tongues out until the tips touched the cold glass of her eyes. And it was true: the doll could see then. Isn’t that what an eye looks like when it can see? Open, blue, impenetrable. What if she started talking? That would scare the adults, but not us, we thought. A miniature life, easy to love. Suddenly everything came to us filtered through the doll, even innocence, because we were like her and she was like us. What good would it have done to say, “She’s pretty, we like your doll”?

And it was all because Marina had come.

It was the same with our morning showers.

Before, we used to line up by the sinks. First we brushed our teeth. Then we took off our clothes and left them on the bench. Hot water and steam and shampoo, those things were happiness, too. And we used to play tricks all the time. Under the shower’s jet it was different: we forgot each other and felt a little alone in our pleasure, as if we’d been abandoned. We felt a hand soaping up our backs and legs, but it was an invisible hand, because you had to close your eyes so you didn’t get soap in them.

Who was the first one to notice it? We don’t remember. We don’t even know if we actually saw it: Marina’s scar. We had to defend ourselves against that scar that Marina didn’t hide. Suddenly we saw each other seeing it, we differentiated each other among things, among the others, we differentiated her, her back, her walk, her eyes, her face like a vague feeling of fear.

We didn’t know sadness until we had a point of comparison.

And it all started there, like a breach, in her scar.

We became aware of each other and we felt naked before that body that wasn’t like our bodies. For the first time we felt fat, or ugly; we realized that we had bodies and that those bodies could not be changed. Just as she had materialized, we materialized: these hands, these legs. Now we knew that we were inescapably the way we were. It was a discovery you could do nothing with, a discovery that served no purpose. We huddled together when she approached. We were afraid to touch her.

“What’s the matter with you?” the adult asked.

But she was staring at us and she was so close; it was like she were saying, “It’s my secret. All mine.”

“Would you mind telling me what on earth is the matter with all of you today?” they asked.

But Marina didn’t react, didn’t get involved. She stood there, patient. She closed her eyes when she was told to, and we watched the shampoo bubbles being rinsed from her hair, sliding down her body to her feet; and the swirl they made in the drain, we saw that, too, and the towel they used to dry her with.

Andrés Barba is the author of twelve books, including August, October and Rain Over Madrid. In addition to literary fiction, he has written essays, poems, books of photography, and translations of De Quincey and Melville. His novel Such Small Hands is forthcoming from Transit Books.

Lisa Dillman won the 2016 Best Translated Book Award for her translation of Yuri Herrera’s Signs Preceding the End of the World. She translates from Spanish and Catalan and teaches in the Department of Spanish and Portuguese at Emory University.