from Everything by Charles North

“Everything is just nothing repeating itself.”
—George Herriman

Stop me if you’ve heard this one.
Two llamas poke their heads out of the small stone enclosure
(part of a garage) they spend their time in
when they’re not taking the sun in a
tiny, fenced-in yard dotted with wildflowers.
Just as we turned to look, a small flock
of wild turkeys materialized out of nothing
and began squawking, clearly at us.
Who knew they were the concierge family!

Everything gusts—
and then dies back down.

At least as likely: Everything exists
inside a giant thought balloon
which rides continual gusts, although no one
can possibly speak about, let alone contemplate, the
situation.
As to the air outside the balloon, spangled
with oak leaves and high strips of white clouds …

let’s leave that one for now.

Speaking of balloons, the image I’ve always liked,
from as far back as high school, is the lead one.
Successful as a lead balloon.
It took off: like a lead balloon.
The fact that it got off the ground at all
—before plummeting with a thud if not a loud crash—
does a good job of encapsulating human striving
wedded to human failure. Not, certainly, that the conjunction
is inevitably the case. But the poignancy,
to me anyway, is palpable.

As to the light from outside that must penetrate the thought
balloon
regardless of its color or degree of translucence,
that, too, seems best left for later,
like playing two sets of tennis following a bout of pneumonia.

Or the view of Niagara that nobody has.

What did the 20-oz. bottle of Perrier
say to the late afternoon sunlight struggling to get indoors?
The apartment building has more openings than the sprawling
cemetery on the way to the dump in Hudson

or the one littering the heavily-trafficked Manhattan
approach to the Robert F. Kennedy (formerly Triboro) Bridge.
You’d think the fumes by themselves would be a discourager!

You say tomato
and I say everything is consumed by its appearances.
I’ve been instructed to push
a handful of minor characters back into the wings but they
won’t go,
no matter how hard I try.
The pencil line between being and not being, hardly
static however it looks

—more accurately, between staying
put and erupting into feelings that can’t be held in check no
matter what,
like the corruption built into medical advertising
aimed directly at the TV-viewing public—

reminds me of the boundary line
between so-called feeling and so-called understanding.
To have a purchase on. Know thoroughly
by close contact with, or long experience of,
as opposed to hearsay or even legitimate authority.
As the great poet Mayakovsky sidestepped at least some
of the more sinister aspects of Futurism, only to fall victim
to himself
as well as comrades who didn’t mean nearly as well as
they should have, so time fights off just about every
conjunction,
those with palpable connections to space
as well as just about any others you can name.

There goes one now.

In fact the sky,
as Wallace Stevens remarked of the world
just prior to the onset of World War II (in contrast to
T. S. Eliot whom Stevens somewhat surprisingly singles out
for praise)
is growing floppier. Warped tent poles and stakes,
an occasional scrawny pigeon on the wing,
one roof garden with a flapping umbrella
which, from the back, looks like Our Lady of the George
Washington Bridge

but no cloud structure for support, unless you count the
grayish wisps,
barely clouds, that hung around the Palisades
for most of the morning. Actually, the view is appealing—
provided it doesn’t decide to go
too far in the direction of floppiness
and risk falling over into the appearance
of whatever is holding it up, a girder or pylon
or some idea of structure per se that hasn’t yet been
”instantiated.”

Speaking of support, I’ve had a hard
time forgetting about the guy in our building
who I used to see going for his run every morning before
breakfast,
who jumped from his tenth-floor window and magically
survived,
seriously broken bones but alive, apparently
because he landed in a tiny courtyard on a bale
of recycled newspapers, primarily The New York Times.

Does that qualify as the ethical sphere? Maybe just?

Yesterday morning just before I woke up,
a few persons with backpacks and what looked like metal maps
several inches thick
were bobbing up and down on platforms that looked like ice
floes
but more cork than ice. Every once in a while
one of them went over with a silent splash.

Suicide is one of the silent e words
but so are cope and rosette.
Inchoate. Baseline. Nape.

Here’s one. How many singularities
can fit onto the head of a pin
pushed into the so-called bulletin board of consciousness
(cork again but not a real theme, I’m pretty sure)
as distinct from the riptides, sinkholes, tsunamis, you name
it
(occasionally just a tone row or cluster)
that emerge, seemingly out of nothing,
to manhandle the attention principle and hold on
for what can seem, and in some cases be, hours or even entire
days?

So how best to use one’s time
—which in one very large sense is everything—
is at best a conundrum worth examining
and at worst the exam in the dream (with all the silent
percussion)
in the course you’ve never signed up for, although
everyone else is scribbling away at their desks next to their
green lamps: the lagniappe being (somewhat on the order of
dusk)
an apparently new range of colors, intonations, shapes, etc.,
which is familiar and also entirely out of the blue.

2
As I was saying

The art of schmoozing isn’t hard to master.
—I wasn’t saying that, you were!
Well stop anyway.

Two beefsteak tomatoes go out for a walk
just before sunset, avoiding anything with sharp edges:
shadows of pre-war cornices and
iron gates on the relatively bright pavement,
grates, high heels, stop signs,
the shark kite stuck between tree branches …

which don’t include, although they hint at,
certain of the silent e words
I began to mention earlier—suffused if
not with blood, then with a coursing nostalgia for
beginnings.
Sometimes unbearably so.

Just because
a single letter appears with more frequency
than any other in the alphabet, it doesn’t mean its position
is always the most enviable—

any more than black A, white E, red I,
green U, and blue O
are written in stone, Rimbaud notwithstanding.
In fact, in the version I prefer,
every one of those backwards-looking, forlorn-seeming final
e’s
was wrenched from its quarry of pink granite

as from the age of eight
and probably before,
the urn-like U has been firmly cemented
in the yellow-orange range, if not so dark or
coarse-grained—painterly is the word—
as the orangey hawk that used to land on our bedroom air-
conditioner
three or four times a year, whether to
gather its energy or look down onto the street
for a meal, or just decide on the next leg of the trip.

What would it be like to see things
too clearly, from above as well as below?

I hope the following isn’t depressing,
but the more I entertain it
the more I like the image of a coffin with a skylight,
as the writer Michel Leiris described the lid
Raymond Roussel had made for his mother, presumably
so he could have glimpses of her
even after the coffin was nailed shut for good.

Or at the very least
be an open and not eternally closed case.
A lot more poignant
—and human, it seems to me—
than desperate. What
it is like to be something rather than nothing.

George Herriman: “Everything is just nothing repeating
itself.”

I know that’s Krazy Kat
(actually, it’s the inspiration of Bum “Bill” Bee,
a dour but oddly engaging resident
of Herriman’s Coconino County, Arizona),
but the point, I hope, is that
the substitution of daylight for dark,
everyday experience for the mystery that threatens
to bury it out of time and out of mind
(“the nothing that is”)
is worth acres of literary allusions.

Speaking of mysteries—
the literary kind and not merely the “ultimate” one—
it occurred to me that trying
to write one is a way of separating
what is important from what certainly isn’t;
what the Detective Chief Inspector had for breakfast
along with his espresso (in Paris,
where most of the action takes place),
the color of his forties-style trenchcoat and the sky
louring over the centuries-old buildings

alongside the deadly game being played out over fictional
time
which is organized into chapters that are
artificial and also gripping segments of real life
—and whose very artificiality the reader
perceives as a way of providing not only
a convenient framework for the reading experience,
but hints (on some level) about facing
actual situations that might prove overwhelming,
e.g., the notion that a penultimate chapter may embrace
the future as well as the present, thereby
mediating any untenable shocks to the system.

A few additional examples along the same lines
(we might call it “domesticating”
what is profoundly other): the notion of an underworld,
quaint as that is; people dropping
“like flies”; a headless figure in a black cloak
carrying a tool used for harvesting;
the image of a coffin open to sunlight, if not fresh air.

not to speak of shreds of last night’s dream
which, unsurprisingly, was mostly about you. My position
was unclear.

“The trouble with mornings is that they come when you’re not
awake.” —Archie Goodwin

But rarely if ever is
it everything or nothing—just as
it’s never Archie Goodwin without Nero Wolfe, and rarely
without the wonderful, mysterious Saul Panzer as well.

Or Scylla without Charybdis.
Or anagnorisis or fate accompli, but not both.

I hasten to add that if you have anything to say about any of
this
which might be of interest to others
and not just yourself (or your in-group)
by all means say it. But please remember
to raise a hand and wait to be recognized. Others may be
as eager to speak—or object—as you are,
and the time, as always, is limited.

Charles North is the author of ten books of poems, most recently What It Is Like: New and Selected Poems (Turtle Point/Hanging Loose), which topped NPR’s Best Poetry Books of 2011. Translation, with drawings by Paula North, was published by The Song Cave in 2014. States of the Art: Selected Essays, Interviews and Other Prose, is forthcoming from Pressed Wafer in spring 2017.

This excerpt represents two of the four sections of North’s poem Everything. 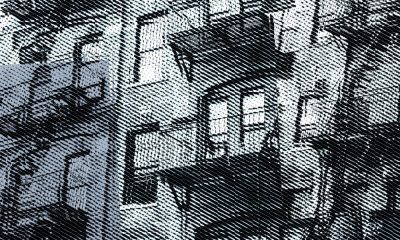