When she was twenty, the woman didn’t think much about skydiving at all. It was an exotic concept and felt far from her life as it was, though on her walks to class she passed plenty of women her age wrapped in rigging, practicing their barrel rolls on the soccer field. Nobody invited her to go skydiving back then and she understood why; though she was young and reckless and spent plenty of time hanging around the airport and even went up in the terrifying small planes flown by the boys who had only barely passed the test to get a pilot’s license maybe the week before, she kept herself firmly belted in and hardly even looked out the window the whole time she was up there. In dreams she had of freefalling, she was most struck by the sight of the curving horizon, the spectacle of the turning earth.

It wasn’t long before she asked a man to go skydiving with her. He was her boyfriend, and they had decided to play house in an apartment close to the campus where she was a student and he was not.

“It would be fun,” she said, hearing how dumb she sounded and realizing she had never actually considered skydiving in any real way, not even with herself. It would be fun?

“We have thirty-five dollars,” he said. “We’re getting kicked out of this place. We’re one bad decision away from moving in with my mother. You want to go skydiving?”

She thought of his mother and her dogs. “People have done it with less.”

He went to band practice and they never spoke of it again.

She totally understood even then that skydiving wasn’t something done once and forgotten. Of course anyone could jump out of a plane, but to do it right required work and sacrifice. And it was even more than that; it was a culture she would have to join, and responsibility was a part of any culture. She researched skydiving endlessly, trying to understand the sense of it, and consumed much of the readily available media, books and movies devoted to the relationships between instructors and students, between students and other students, instructors moving through the trauma of a skydiving accident, students saying goodbye for the last time to their beloved instructors to become instructors themselves. The saddest stories for her were the ones about the fearful ones who stood on the ground, watching the planes dart across the sky. She hated those people and was one of them. There was a whole world to it that she was just starting to understand, and the only thing she knew was that she needed to figure out where she fell on falling.

Eventually all her college friends would go skydiving without her, many times over. Planes passed by overhead but seemed so far away.

Of course, people started to ask. Once, at a dinner party, the hostess went around the table and asked every single woman if they would ever skydive, and if not, why not. One of the guests half-whispered that she had wanted to but had failed the license exam and was ineligible.

“You know, you can go tandem with an instructor without a license,” another woman said.

The first woman looked at her napkin, which she had torn at the edges into a fringe. “I know,” she said.

Another time, the woman had lunch with a dear friend who had just gone out and done it, and who was open and honest with her about the realities of it in a way which made skydiving seem irresistible and compelling, and to the woman it felt like she was being described the contents of just the kind of museum she most enjoyed, the ones which made her deeply afraid.

The carnival came to town and she visited the same ride again and again, a slingshot which flung riders into the air. Even before it began the ride was nearly over, and the machine tossed her up and brought her back down. She started to fantasize about unbuckling herself so that the launch would send her up and away for real, but those thoughts only made her hold tighter to the rigging.

She got into the daily videos of a couple who were documenting their plans to go skydiving in what the woman thought was kind of a self-satisfied way. Still, she watched every video with great interest, trying to figure out where they found the confidence. She didn’t realize her real motive for watching until the day they finally went for it; they got up together in the plane and jumped out together, and the man’s parachute snagged on his leg, wringing him out in mid-air. There was a brief and delicious moment of panic, and the woman watching had to admit that all the while she had been hoping that there would be a terrible accident, that one of them would actually die and the survivor would have to admit that skydiving had been the worst idea of all time.

By then she was dating a man who had gone skydiving once as a younger man, and loved it more than he could possibly love anything in this life, but paradoxically could take or leave the idea of going again. She wanted in equal measure for him to talk her into it and to leave her alone on the subject forever. When she told him this he nodded, and put a bookmark in the magazine he had been reading, which was about cloud formations. He was patient with her and listened to her endless arguments for and against small-engine planes, arguments she presented to anyone who would listen, sympathetic grounded friends who one-by-one went to quietly enroll in their own classes.

It got to the point where the woman couldn’t walk down the street without experiencing the sensation of falling, the wild weightless feeling in her legs. She feared and fantasized about the weightless ride, the soaring sense of the world as witnessed under the cupped palms of the stratosphere. She imagined looking out to see the curve of the planet turning from her forever. If she only took one simple, single step, the entire weight of the world would fall away and rush to meet her all at once. But she didn’t!

Amelia Gray is the author of five books, most recently Isadora (Farrar, Straus & Giroux, 2017). She lives in Los Angeles. 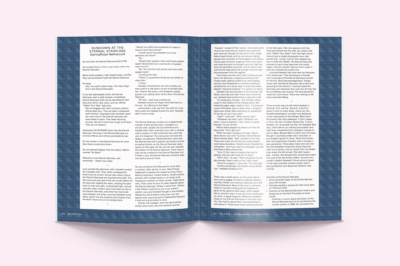