Sculpture that seeks to elude binaries. 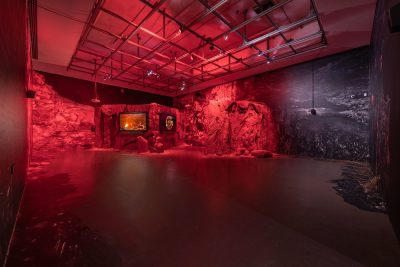 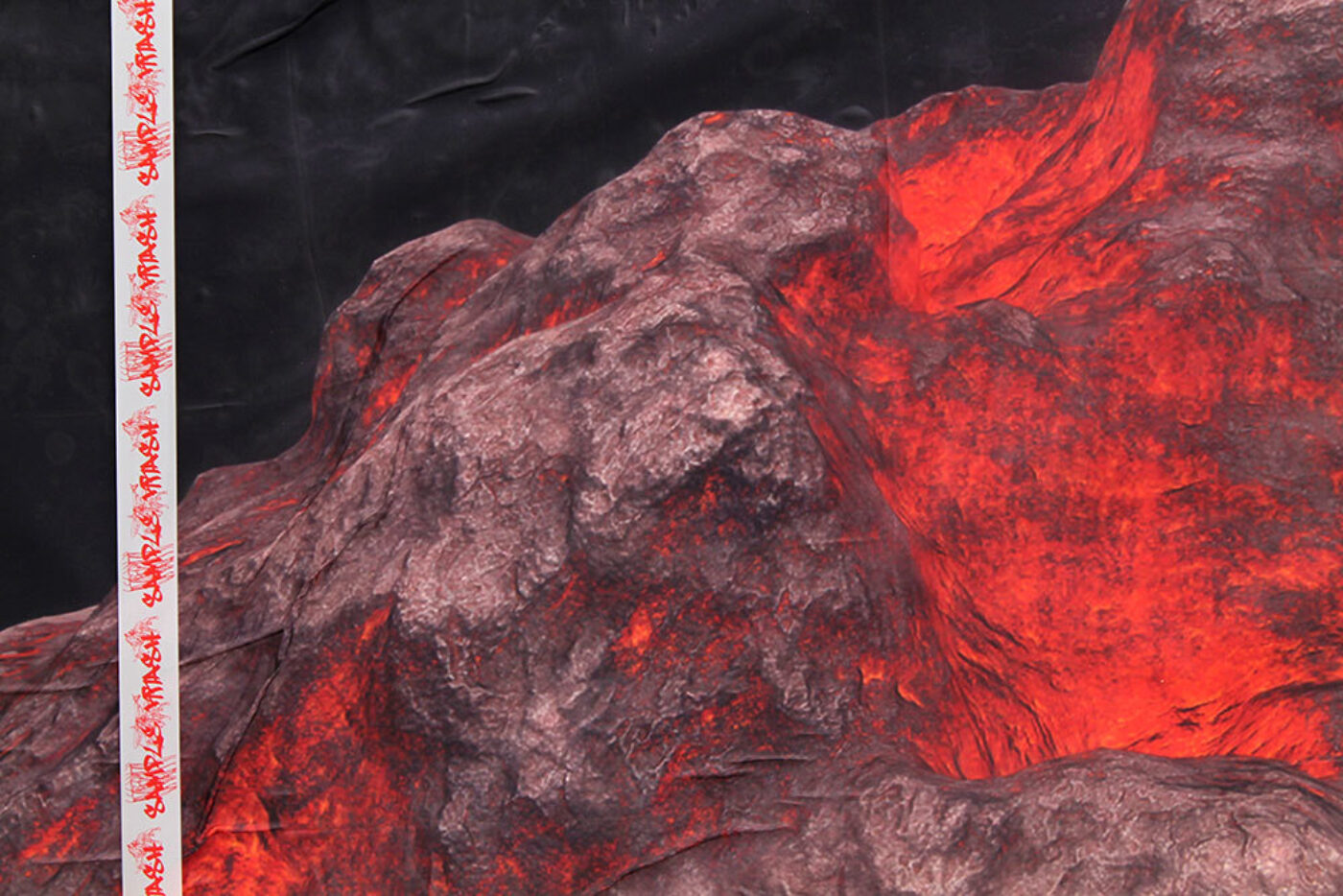 In recent years, discussions of the posthuman have proliferated, particularly within feminist discourses. Lito Kattou continues this conversation, grounding it in the concepts of subjectivation and metamorphosis in order to explore the blurry human/nonhuman binary (be it animal, machine, or the environment). Drawing from the postfeminist writings of Rosi Braidotti, Kattou asserts that through metamorphosis, or “the process of becoming,” subjects can advance beyond this binary. Prior to her inclusion in the 2019 Ducato Prize exhibition, for which she was awarded the Contemporary Art Prize from a shortlist of ten artists, I spoke with Kattou regarding her influences and the ideas that drive her work.

Caroline Elbaor When considering your thoughts put together―including subjectivation, Rosi Braidotti and postmodern feminism, and the obsolescence of binaries post-metamorphosis―the related themes of development and process emerge as seemingly central elements in your work.

Lito Kattou Yes, absolutely. Post-feminist discourses have inspired me a lot, especially the non-anthropocentric understanding of the body in relation to the Other. Metamorphose and transformation are in flux, and it is urgent to understand them in the absence of binaries. These points of view—which a large community of theorists, philosophers, scientists, and art practitioners share—are continuing the understanding of the Foucauldian term of subjectivation, which describes the process of becoming a subject.

And it is exactly in this process of metamorphoses where the “nomadic subject” transcends. As Braidotti stresses, our identity and materiality are understood differently, whether referring to humans, nonhumans, animals, insects, or machinic bodies. It is important to make clear that for me personally, when thinking of the posthuman, I do not focus only on the machinic body consisting of robotic body parts. Instead, what I tend to examine throughout my work, through the construction of narratives, characters, and hybrids, is the posthuman as a state in different forms unfolding as time passes. And by saying “in different forms,” I am thinking of how any being and its body might be affected and transformed due to technological or biological advancement, ecological changes, any kind of violence, acceptance, and symbiosis.

This fluidity toward change demands an obsolescence of the stereotypical thesis on what the Other is. Processes of metamorphoses, changing different moments related to unprecedented times and locations, are what intrigue me. So the question of how beings develop into the subjects they are remains open and under examination. 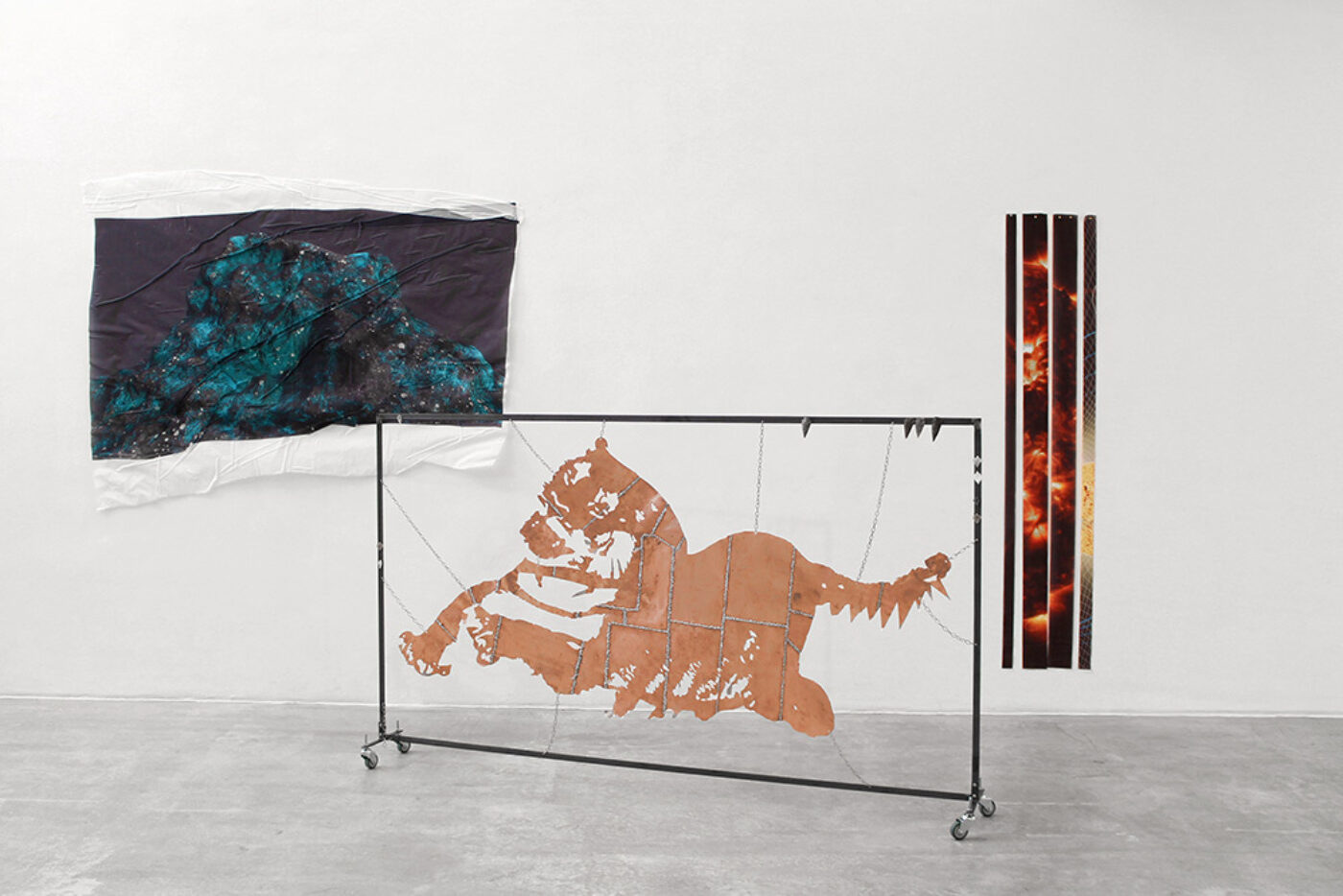 CE Building on that thought: in his review of Braidotti’s Metamorphoses: Towards a Materialist Theory of Becoming (2013), Kevin Pelletier asserts that by elevating the positive aspects of process, Braidotti fails to consider the “painful, traumatic experience that is ‘becoming,’ instead positioning the process of metamorphosis as one of pure ecstasy.” Do you agree with Pelletier’s assertion? And if so, how would you say your artistic pursuits address this point?

LK I haven’t really understood that metamorphoses was only viewed through ecstasy. Pain, trauma, and failure are present in any type of transformation, as well as ecstasy and fulfillment. How could they not be? This is considering only organic matter and its procedures of changing. If we think of geology, for example, it is a completely different story. Nevertheless, I wouldn’t idealize one of the sides. Both are present through different oscillations in a transformational process—exactly as in a work of art, and in art’s transformational power in general. Moreover, I do not perceive metamorphoses as a once-in-a-lifetime, “big-bang” event. I feel it is constantly around us, and it should be constantly filtering our perception of how we choose to live at the very moment.

CE You use the term “humanoid” in the context of the work that you make. Yet “humanoid” can be fairly broad, referring most generally to any “non-human” form that nonetheless has human characteristics. In what context are you using the word?

LK The term has been used frequently by the science-fiction genre in order to describe sentient extraterrestrial life forms as byproducts of convergent evolutionary theory. I use the term for describing specific characters that I usually construct for my narratives: installations that keep human characteristics as part of their ambiguous forms, implying in this way morphological conversion and adaptation. I am not saying that this is a literal projection of a sci-fi understanding of the human body turned into a cyborg, etc. But for me, the differentiation of the stereotypical body form might also imply psychological or behavioral attributes and skills. 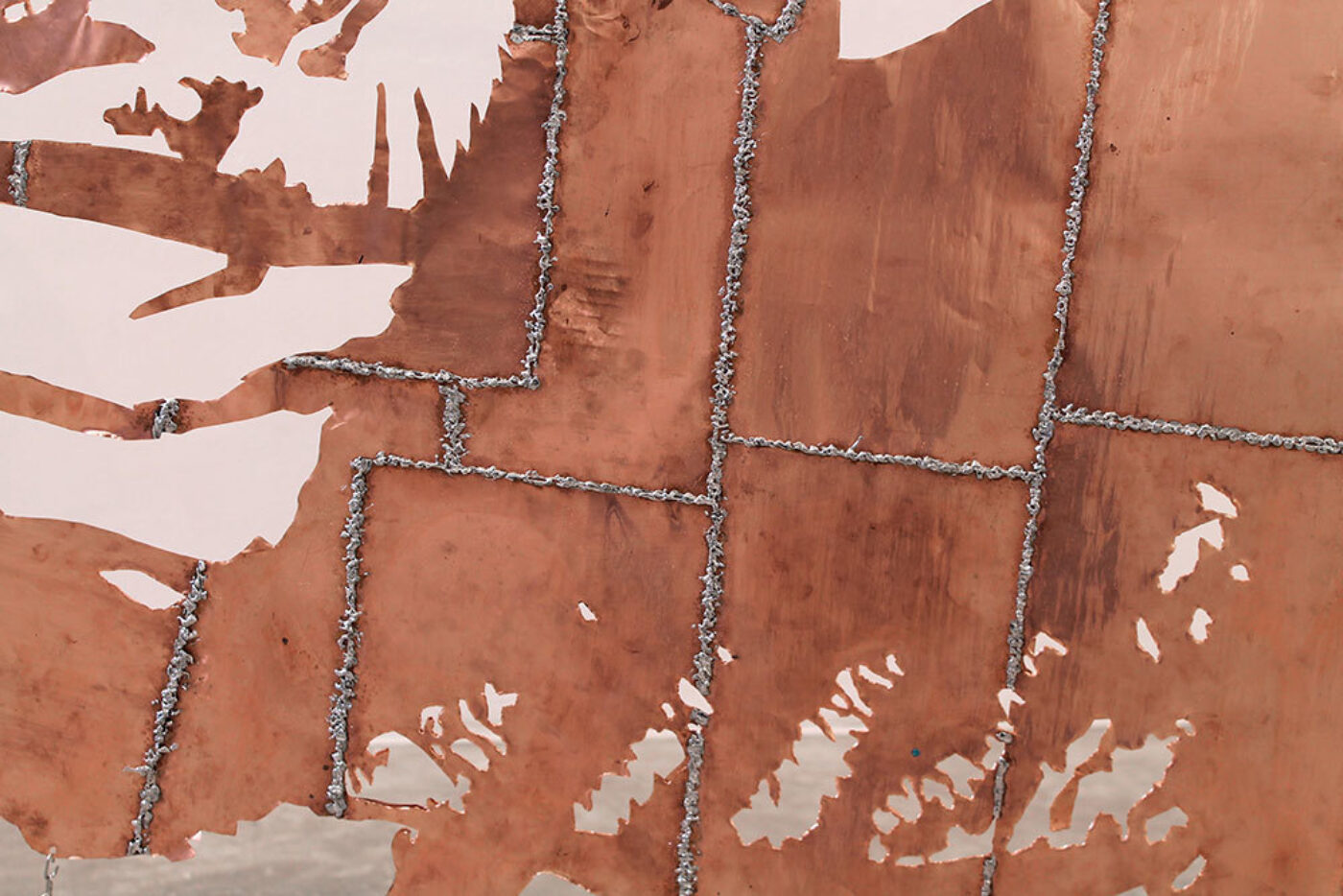 CE I’d like to talk about the flatness you mentioned within your two recent presentations at Polansky Gallery in Prague and Artothek in Cologne, as it seems to me that this concept plays an equally important role as metamorphoses.

LK My interest in flatness is really an examination of materiality and the limits of volume in an ontological way. Referring to patriarchal dipoles and categorizations, I have always felt that flatness gets closer to the “non-expected” of what a sculptural vocabulary should do.

Flatness gives freedom to my narratives and the stories I create through my works, and to the cosmos I wish those characters to inhabit or pursue. I am interested in seeing volume conquered through flatness in the same way that the digital environments around us, and our screens containing all this “volume” of information, are constructing in real life as a two-dimensional experiential terrain. Flatness promises a fluidity, another chance for objects and bodies to be thought of as matter. 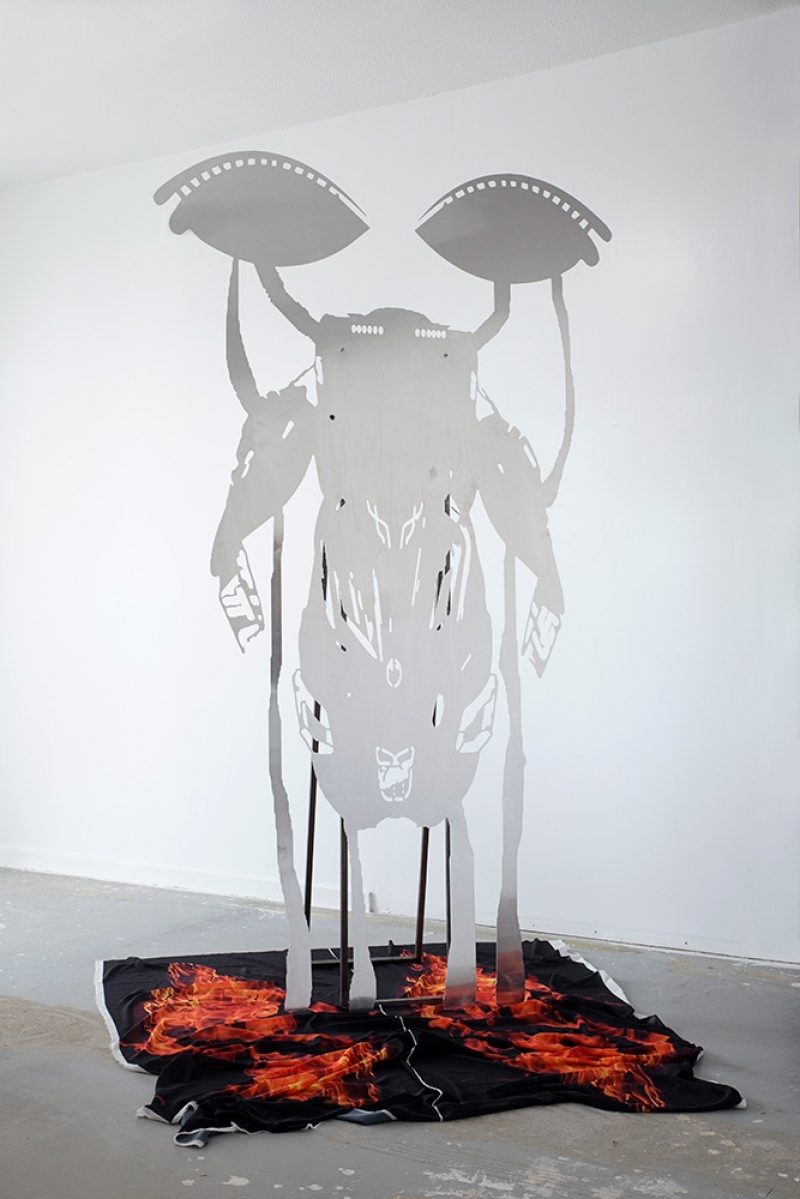 LK Thinking about modes of communication outside of the human (as in modes that take place between animals, humans and animals, or machines and animals) is a process which is difficult to outline and understand. All of these different configurations that might bypass verbal and linguistic norms are implied in my works. As a human body, this seems to be an unmapped area of cognition. For example, I have an ongoing communication exchange with my cat which I am unable to categorize and describe. I remain more or less unable to use my human “tools,” such as language, in order to become closer, but can employ touch and gesture.

In this same way, I make use of language fragments in my works by keeping in mind the pursuit of the unsayable, of what hovers between language and sentiments, and can only be articulated by one’s basic means. Thinking of this, I am reminded of a story by the ninth-century Arab writer al-Jāḥiẓ, which is described by Andrea Flores Khalil and included in John Roberts’s 2015 book, Revolutionary Time and the Avant-Garde. The story makes a reflection on finding your way “home,” whatever home might mean. It reads:

What did the Arab of yesteryear do when he lost his way, at night, and could not find his way? … The answer is that he begins to bark. Metamorphosing into a dog and barking, he is able to attract other dogs and be led by their sounds to safety, because where there are dogs there are humans… The key to finding one’s home is found in metamorphoses, or a transformation into what one is not.

I take this to mean that which grounds my practice, also quoted by Roberts: “In order to become oneself, one must turn into an Other.”

Lito Kattou’s work can be seen in the Ducato Prize exhibition at the Palazzo del Podestà in Castell’Arquato (Piacenza) in Italy until June 23.

Caroline Elbaor is a writer and curator at Dallas Contemporary.

Dissimilarity in Unity: Richard Tuttle Interviewed by Osman Can Yerebakan 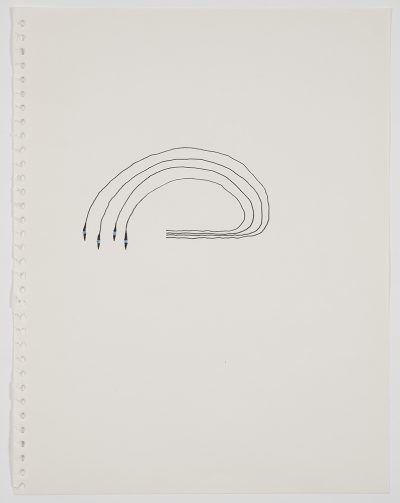 The artist discusses his approach to drawing and color. 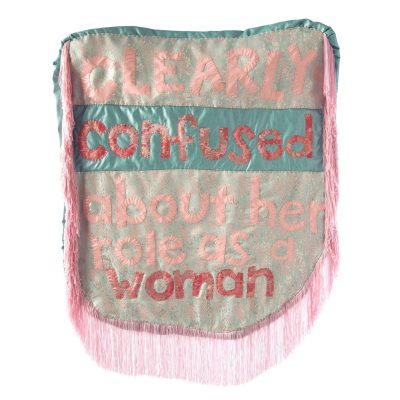