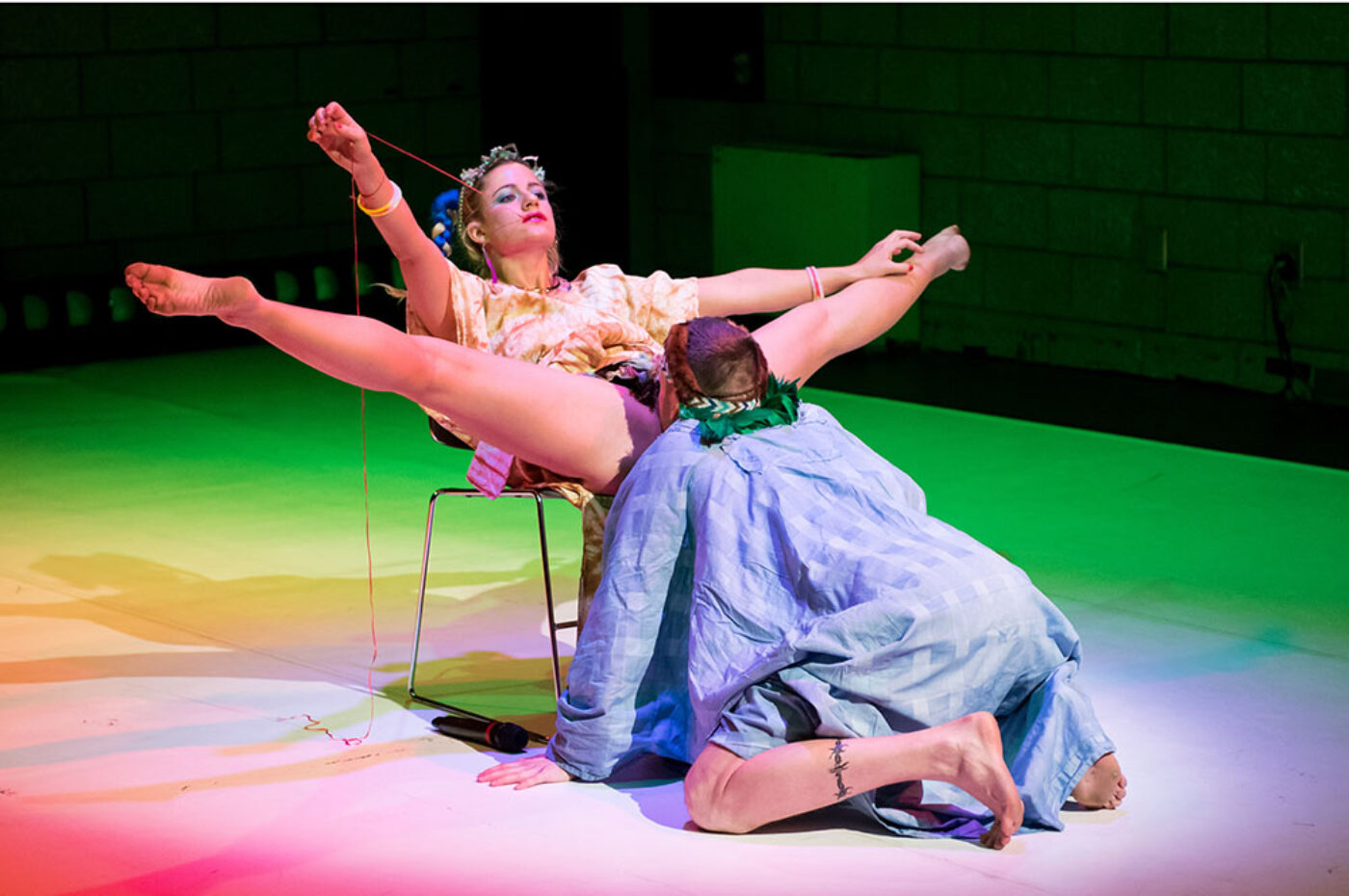 One. I remember Florentina Holzinger’s first costume. It was an oversize, orange-dyed dress, a muumuu really. She was sitting in a chair center stage. A minute or so earlier, a high fan kick had revealed her lack of underwear. Vincent Riebeek, in a similarly loose blue garment, kneeled to sneak his head between her legs—the image momentarily evoking a familiar sexual position. He inched away from Holzinger to display a red string exiting her vagina and entering his mouth. Turning his body to face the audience, he pulled and chewed and the string kept coming. Holzinger lifted her legs into a straddle position. She was also chewing on a piece of red string, creating the illusion that the material was passing seamlessly into one orifice and out the other. Holding their positions—Holzinger in the chair and Riebeek kneeling on the floor—they bounced subtly to the beat of Rihanna’s “Man Down” playing over the speakers. Their bodies formed a vibrating tableau with the string passing steadily between them in a single direction.

Two. I remember Riebeek directing his attention toward the audience in a “Look at me!” kind of way while enacting a series of movements. Mid-head-spiral-into-leg-extension, Holzinger hurled herself toward him while jumping. Without hesitation, they collided. We (the audience) laughed. This scene repeated itself: Holzinger or Riebeek would indulge in moments of solo dancing only to be interrupted by a crash from the other, inevitably provoking laughter from the audience. There was something about the full force with which they moved in and out of contact—never pausing to acknowledge the catastrophe of their two bodies meeting, they just kept going, pummeling each other through the space all the while maintaining the clarity of intentionally extended limbs.

Three. I remember the cerulean blue color of the liquid that Riebeek vomited onto Holzinger’s chest. They wore feather-adorned bikinis. Holzinger was lying on the floor and Riebeek was kneeling in between her legs. The violent effort with which he repeatedly rammed his fingers down his throat was more difficult to behold than Holzinger’s apathetic gaze. After a sequence of at least five repetitions—gag, vomit, gag, vomit—Holzinger looked back at Riebeek plainly and asked, “Can I hug you?”

If these scenes sound messy and irreverent, it’s because they are. Holzinger and Riebeek have a way of managing the clichés their work invokes. Their presences balance each other. While Riebeek performs excessively with camp, Holzinger shows no sign of emotion. She under-performs with effort so that we feel everything bubbling up just beneath the surface. This dynamic might be the most radical aspect of their work. It undermines our expectations of gendered power relations within a given image. Riebeek is working for the applause, while Holzinger just waits for it. Together, they succumb to the disasters of these spectacles without apology.

Lauren Bakst is an artist and a dancer whose work takes the forms of choreography, writing, performance, and video. 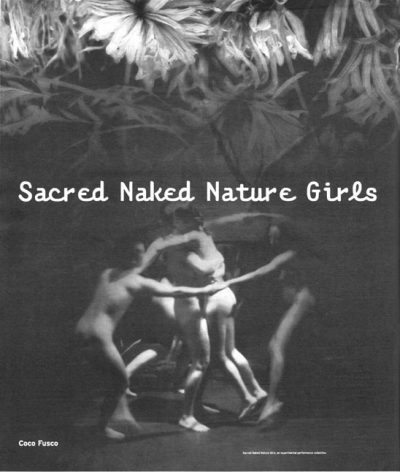 Coco Fusco looks into the theatrical value of Sacred Naked Nature Girls’ spontaneous, symbolic all nude show, and how it deals with issues of the body, gender and performance. 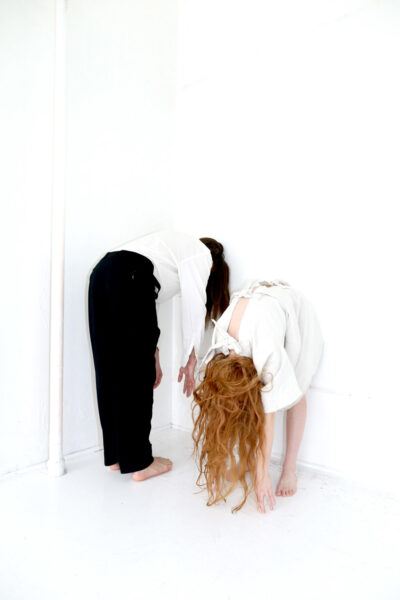