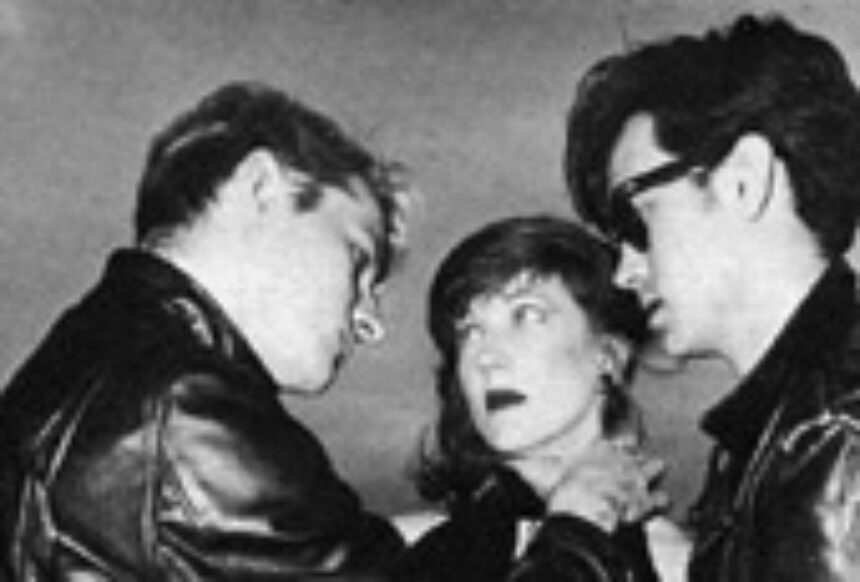 She is the most disgusting creature known to fags. She hangs around the waterfront all night trying to make a queer guy. They could care less. Sometimes she dresses up like a guy but they all know who it is. She is the fag rag whose only ambition is to suck cock. It’s so lowlife it’s appalling, and we all wish someone would teach her a lesson but that’s just what she wants, besides she’s a dumb type who probably wouldn’t learn. So she stays stupid and full of yearning.

Sometimes on a slow night the bartenders on West will tolerate her nasty twat on a barstool. But as soon as some trade comes in she has to get out. She is just a bum looking for a handout. One place has a lot of trouble with her since their john is right next to the back entrance, so she can sneak in and hide out in the bathroom. It’s dark in there and sometimes she gets away with her tricks. More often you hear a lot of yelling and scuffling and she gets her ass thrown back out on the curb. The queens pretend to feel sorry and tsk over her presumption. But in general no one gives two shits.

She will undoubtedly tell you, if you bother to listen, that no one can tell the difference between a male mouth and a female mouth. She is really a fool. She can’t get it through her head no one wants to submit to the degradation of coming within a mile of any part of a woman no matter how much the “same” it is. The queens pretend believe what she says and fake like they’ll take her in the john to prove it-she’s so screwed up she’ll even go for a queen-they take her $ and dash back to the bar, laughing their heads off. “I’m no lesbian.” they scream at her.

They won’t let her in the Toilet because she stays there all night and butts into everything. She tries so hard to win approval, to be slavelike and proper but there’s nothing worse than a pushy masochist. One night the bouncers threatened to mess up her face if she didn’t clear out. She started screaming they didn’t want her because she was so fucking obedient, even more than any male slave. She raved so much they’d punch her one but they knew what was happening and got the cloak-room nelly to come out and slap her one before they dumped her in a cab- “Get on home to your husband, girl.”

No doubt she was swooning all the way home over the rough treatment she’d received, going over and over in her mind their faces, voices, the dose of bottomless contempt they gave her. That’s why no one likes having her around, you can’t help giving her what she wants.

She’s a good-looking girl with a sexy figure, I guess, and she dresses well and looks Uptown. Why she doesn’t answer an ad or make arrangements with a call service I don’t know. There’s plenty of hustlers who wouldn’t mind beating upon her for a hundred or so. She just likes to fuck up the guys’ scene is what it is. She wants to be one of the guys. But one night after she tried to bust into a private party in one of the leather bars down on West a few guys talked about it and decided it was time someone cleaned up the neighborhood.

Her typical scene is to get decked out to the nines and cruise up and down West, stand in front of the bars out on the sidewalk and just stare in at the guys. If the bartender doesn’t seem too hostile she’ll saunter in. Most of the time he won’t serve her and she gets tossed out for loitering. If it’s slow he’ll let her buy a drink and overcharge her $5 or $10. She hangs around, drinking and staring. She really is a gorgeous girl and seems the perfect Hollywood match for all the cowboys and cyclists except. She’ll pick out a guy and glide over and make her move. They usually ignore her, but if the guy has a date he’ll come over and tell her to fuck off. Then she has to split, fast. On very rare occasions she picks some guy who needs the money bad. He’ll look around cautiously and catch the bartender’s eye who lets him know he knows it’s just a trick. So they’ll go into the john. Now and then some square guy will try to pick her up, relieved he doesn’t have to think about coming out that night. She gets wildly indignant and starts yelling, “Don’t you know this is a gay bar?” which totally confuses the guy. In general no bartender lets her stay for more than one drink, except at one very strict leather bar where she has to pay a penalty tax of $20 with each drink. She pays.

So one night they put out the alert for her. Someone spots her hanging around on a corner and goes up to her, inviting her for a drink. She’s in heaven. She can’t believe it. They walk around to a quiet little spot. No one’s around yet so he excuses himself and makes a few calls. When he comes back they chitchat about this bar and that bar and then she makes her bid. “Hey… uh, fella,” she says in a low and sultry voice, glancing nervously at the bartender at the other end of the bar, “I think I could be of service.” She nudges him coyly near his crotch with her hipbone. He takes a pull at his drink and waits on his disgust to have its full flower. “I’ll pay,” she whispers, pursing her waxy red lips like an asshole. “Nah, not tonight,” he puts her down and she besieges him with requests as to when. “Later, later,” she’s tantalized “but I got a friend.” She squirms all over herself just thinking about an available one. “You probably think I’m pretty strange hanging around this scene, don’t you?” She challenges him. “You might not believe it but I do get what I want. Like for instance, yourself, why did you pick up on me?” She’s so fucking stupid. “Uh, I don’t know, who cares?” “I’ve got no choice,” now she’s whining. “It’s the only way I can get off.” He gets really revolted hearing her talk about her gruesome female sexuality. “Oh yeh,” says he, “sadomasochist’s liberation.” She’s all agog. “I knew you had some brains behind that pose.” She yammers on, pleased to have hooked up with such a goodlooker and his buddy. More guys are coming in the place, waiting.

The decoy comes over and has a drink with them. She smiles and shakes hands and immediately makes her offer. He accepts, and asks her if she wants to come into the backroom. She quivers all over with the thrill of it. The infamous backroom. She knocks over the barstool in her eagerness to follow him. “Very unladylike behavior,” sneers a queen. After about one minute a few more guys wander on back. You hear a few high-pitched yells and one long strangled kind of sob and then nothing and the guys come out. Two are lugging a big green plastic trashcan. It only took about ten minutes.

When I came into the backroom she was on her knees in front of him and he was playing around, rubbing his crotch but holding her away. Her eyes were popping out of her head and glued to his bulge. It was real nasty. When she saw me and the other guys she got a little nervous. “Dontcha want to do my friends too?” and with craven delight all over her face she breathed Oh yes- “Beg them, ask them if you may have the honour of being their Vicitm.” She was begging just like he told her to as they hoisted her up on the pooltable and tied her up tidily. When she was good and ready we let her have it with mophandles and chair legs till she was good and broke down. Then we got the pipes out, the one’s we’d filled with concrete for a job not too different from this one. Special attention was given to her pretty pretty face. It was real awful the way she liked it. Even though she fought like mad towards the end you could see she was hot. I wasn’t the only one who got really pissed off over that. One of the guys who has a taste for such things shoved his pipe all the way up her snatch as hard as he could. We put it in the can and went out on the wharf where we just left it. Then we went out to the Pier and finished ourselves off. Someone remembered to go back to the bar and clean up.

After a couple of days they wrote up in the paper a little piece about the body being found. They couldn’t figure out who’d done it. We found out who she was and all. We passed the clipping around, then Frankie burned it and we had one on the house. Word got around about it for those who were really interested and that was the end of that. Miss T., the famous girl, delivered a sermon on the subject: “Let that be a lesson to all you trash, to stay out of dens of evil where you are not lusted after.”