Sarah Gerard continues her investigation of the work of Clarice Lispector, tracing the Brazilian writer’s thinking about concepts of eternity. 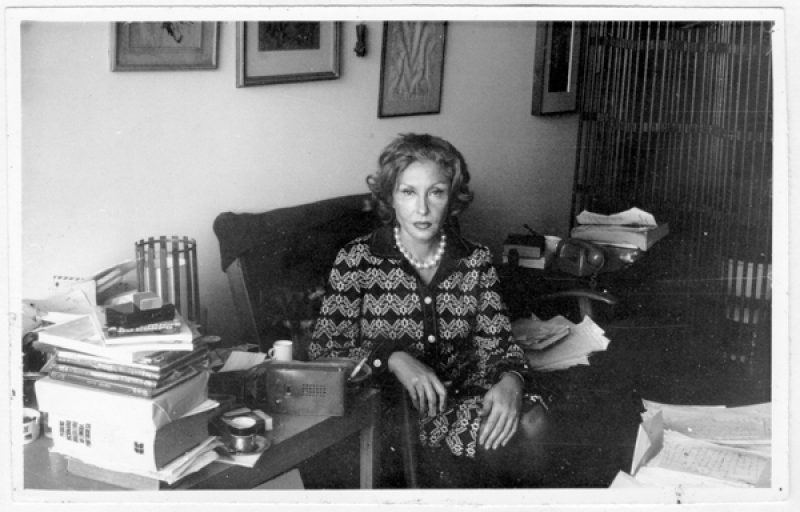 For Clarice Lispector, time is inextricably wrapped up in the act of writing—in the way the author, in the position of God, creates an experience of time between the covers of a book. That her seventh novel, Agua Viva (as well as her last, A Breath of Life), begins and ends somewhat arbitrarily—without narrative, in the classical sense—allows us to imagine that the writing exists independently of the book; that, when we finish the last page, it will go on eternally somewhere outside it. This is reinforced by the way Agua Viva is structured in fragments that were organized only after Lispector died, as if each bit were not necessarily connected to those that came before or after, but plucked from a flow, or a field, and set down on the page—each dispatch constituting an elementary state of the book—or multiple presents, counterparts of what the book presents to us as “all time.”

Early in her career, Lispector took an interest in Spinoza, inserting a passage from his Ethics in her first novel, Near to the Wild Heart. Among the philosopher and lens grinder’s most groundbreaking assertions was that God and Nature were one and the same—eternal, infinite and impersonal. The two terms are interchangeable in his philosophy and, by virtue of their infinitude, all-encompassing. “God is eternal, or all God’s attributes are eternal,” he writes (“or” here actually means a kind of “and”). Everything that follows from “God or Nature” follows necessarily; the universe has always existed because God or Nature has always existed, and everything that follows from God or Nature follows not from “his” will, but is determined by—and is a mode or attribute of—the infinite and all-encompassing continuum of God or Nature. Echoes of Spinoza’s influence reverberate throughout Lispector’s other works, in particular The Passion According to G.H.: “by the abyss of unending time, by the abyss of unending heights, by the deep abyss of God,” and A Breath of Life: “Round without beginning or end, I am the point before the zero, before the period of the sentence.” For Spinoza, as well as for Lispector, the infinity of Nature—and the fact of predetermination that follows from that insight—negates linear time, negates concepts of space. Writing, then, traces our use of these limited concepts as tools to navigate the eternal.

Lispector is fascinated by the relationship of eternity to the present moment. That every moment in a book exists simultaneously accords with the Eternalist view, which posits that all moments in time—past, present, and future—are equally “real,” or in other words, happen simultaneously. But humans experience time as flow and, likewise, experience the moments in a book as flow: this is the focus of Agua Viva. In many ways, the book examines the Presentist problem of perceiving the Now: How can we account for the lapse between experience and perception? Can we ever experience the present, or will we only ever experience the memory of it? Who am I Now if I can only ever know myself in the past? The book’s narrator has given up painting, she says, because she can only paint the “unattainable forever”; paintings do not exist in time, but are unchanging—each point in the painting exists simultaneously and, in that way, a painting resembles eternity. With words, she thinks, she can place herself in time and thereby attempt to transcend it to inhabit the present before it slips into the past, “But the instant-now is a firefly that sparks and goes out, sparks and goes out,” like the sections of the book. In order to do so, she’ll need to overcome the part of writing that requires her to be conscious; she needs to be in the place of “beyond-thought” because the consciousness of her words —first, the consciousness of her own consciousness, and then the deliberateness of writing—separates experience from the Now. She seeks to be in the “pure present,” at the “source of the spring,” “[eating] from the placenta.”

On July 2nd, scientists at CERN found evidence of an elementary particle that fits the description of the Higgs boson, the proposed counterpart of the Higgs field, a quantum field that permeates all space and is responsible for giving everything in the universe its mass. According to the theory, as particles move through the Higgs field, they gain mass by interacting with the bosons that constitute it; particles with more mass interact more with the Higgs field, while those with less mass interact with it less. Without it, we would have no mass, structure, or even atoms; we’d be nothing. For almost fifty years, scientists have searched for evidence of the Higgs boson, but it only exists for a fraction of a second before breaking into particles, and can only be detected through analysis of the results of its immediate decay—in other words, its memory. Even now, as close as the scientific community is to an official discovery of the Higgs boson, they will have to wait years before all of their evidence is confirmed and they can report the discovery conclusively. And then, they would not be reporting on the discovery of the thing itself, but rather its aftereffects as communicated through the language of science.

Even if it were possible for a person to experience the creation and destruction of the Higgs boson within the Large Hadron Collider, Lispector might say, it is impossible to reach an understanding of that experience without the use of language, which separates it from the truth, and from the present. Just as our knowledge of the Higgs boson can only be ascertained through the information we gather after it is destroyed, in assigning a symbol to a thing, we necessarily destroy part of it. In order to experience anything in the core of the present—as it actually is—we have to reach a place of complete stillness where language has no use; where we no longer seek to understand, but only to be.

In all of her novels, Lispector grapples with time’s implications for language and the construction of identity, and struggles toward their expression: How to talk about eternity? How to talk about identity? How to talk about God? Each requires language, but rather than satisfactory descriptions, she finds circular ones, because each exists within the other as interlocking stories demanding to be written. In The Passion According to G.H., the book’s narrator deconstructs the boundaries of her identity down to and beyond gender, species, even matter, until she and everything else in the world are one with the white matter of the cockroach that is the book’s focus. In transcending the psychological and physical boundaries of her identity, G.H. becomes gleefully, rapturously one with the present moment and—as if breaking down the boundaries of the moment itself—also one with eternity. In Lispector’s conception, the stillness of eternity and the stillness of the present moment are one; within each present moment, there lives an eternity. Likewise, Agua Viva begins without character or plot, and seeks only to transcend the boundaries of the moment.

Agua Viva seems as if it were not written to be understood, but rather to be experienced. Like a particle with little mass, the reader skims along without interacting too much with the language, instead experiencing it as sound, rhythm, inflection, like the persistent booming the narrator hears in the beginning of the book—a feeling rather than a message: “Listen only superficially to what I say and from the lack of meaning a meaning will be born as from me a high and light life is inexplicably born.” Like bosons, we gain mass as we move through the fragments of the book. The more we interact with the language and try to deconstruct it, the more massive we become. Though it doesn’t have a story, Agua Viva reaches a climax, a weightlessness, and denouements in the past tense—as though, like the existence of the Higgs boson, Lispector can only talk of the memory of her experience of the present, but cannot actually transcribe that present. She is a writer obsessed with fissures and lacunae; the experience of the present is left out, exists somewhere in the separations between moments, like cracks in a sidewalk, like dark matter between the bosons. We don’t see it—can’t see it. To find it, we have to stop talking about ourselves. We have to stop being things, and instead, simply be.

Sarah Gerard’s fiction and criticism have appeared in BOMB, The Brooklyn Rail, New South, Slice, and Word Riot, among others. She has written journalism for The St. Petersburg Times and Creative Loafing, and edited a number of journals and street papers. Her debut novel, Binary Star, is forthcoming from Two Dollar Radio in 2015. She is a graduate of The New School with an MFA in Fiction, and the director of circulation at BOMB.