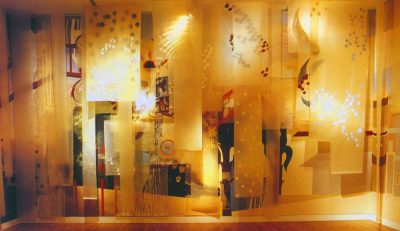 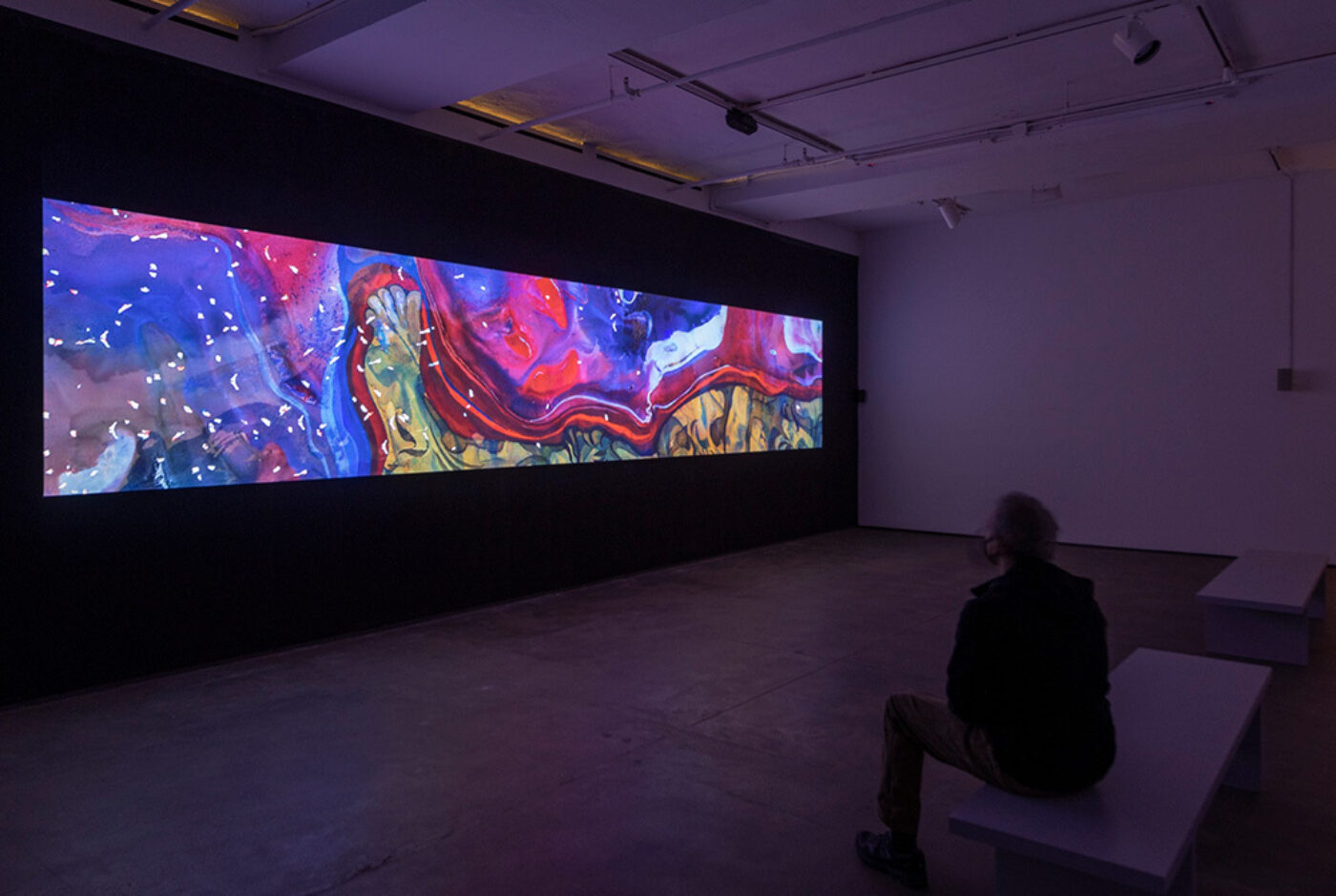 A beautiful feat of friendship and shared study, artist Shahzia Sikander and composer Du Yun have been consistently collaborating for over ten years, developing immersive cinematic animations and live performances that incorporate the voices of traditional poets and musicians from cities including Lahore, Sharjah, and Shanghai. This fall, as part of Sikander’s solo exhibition Weeping Willows, Liquid Tongues at Sean Kelly Gallery, a suite of the artists’ major collaborations—Parallax (2013), Disruption as Rapture (2016), and Reckoning (2020)—will be shown together for the first time. I often find that creative bonds between women fall out of public discourse—perhaps a symptom of the individualism, particularly in its capitalist instantiation, that has defined our current era. With this in mind, I invited Sikander and Du Yun to reflect upon their prolific work together which bridges artistic disciplines, languages, and traditions.

Allie Tepper Shahzia, you began translating your ink paintings and drawings into a world of kinetic animation in the early 2000s, and over the past decade Du Yun has been involved, making music. What exactly prompted your early artistic encounter?

Shahzia Sikander We first met in Bellagio in Italy in 2009 at the Rockefeller residency, and though that meeting was brief, it was clear that there was a lot of common ground in the way that we both were engaged in tradition—conceptually, but also viscerally and technically. We both intuitively knew that a creative parallel was very real. Like typical New Yorkers, we asked, “Where do you live?” and realized we were neighbors. Later there was an opportunity to make a work and related installation for the Rockbund Art Museum in Shanghai, and it made perfect sense for Du Yun to create the score, since she is from there. I wanted to incorporate the local through her experience. The work we created, The Last Post (2010), referenced the colonial history of the subcontinent and the British opium trade with China.

Du Yun For that installation, we looked at old Chinese poetry and calligraphy, and talked about calligraphy from Shahzia’s tradition as well, and what it means. Shahzia at this time was really pregnant, so I became the eye and ear of the project. With any meaningful collaboration you need time to get to know each other. That project really made us sense our aesthetic rhythm and collaborative impulse as well. 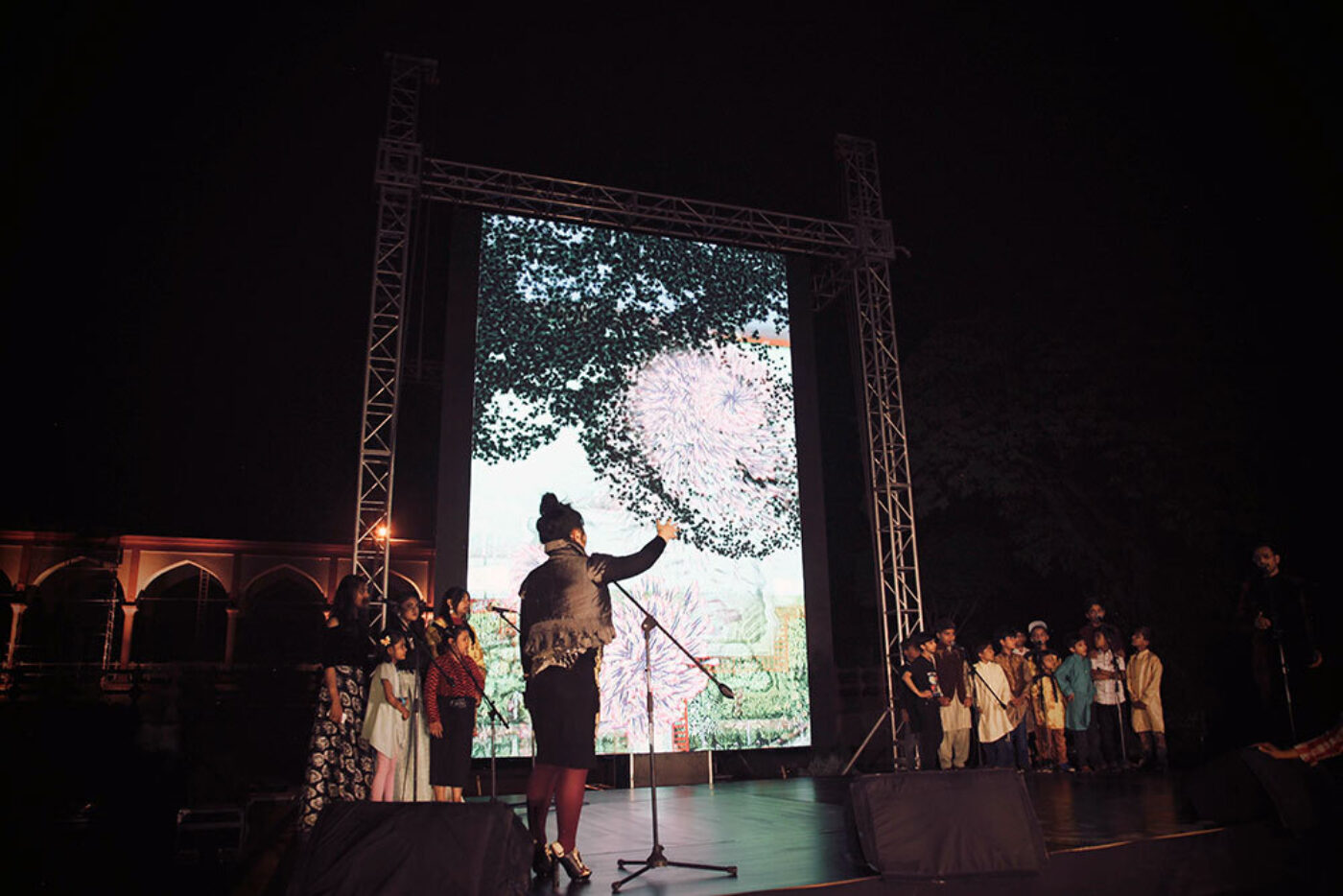 AT Could you elaborate on the role that tradition and folk art plays in your respective practices and collaborations? Shahzia, you have for many years explored forms of Indo-Persian miniature painting, which encompasses a very plural visual and cultural terrain. Du Yun, you have a project called FutureTradition (2017–present) in which you’ve collaborated with regional musicians and theater troupes across the world exploring Chinese Diaoqiang Opera and Indian raga, among other forms.

SS Historical Indo-Persian painting along with manuscript and Islamic book arts embody a vast, deep relationship with language, poetry, and text, as well as forms of music like ghazal and Indian ragas. I’ve studied these visual traditions with the philosophical and conceptual in mind, but sometimes the text, like an epic poem, can be several thousand verses long. For Disruption as Rapture (2016), commissioned by the Philadelphia Museum of Art, it was impossible to translate and condense the story of five thousand Urdu Deccani verses of Nusrati’s 1657–58 poem, Gulshan-i ‘Ishq (Rose Garden of Love), a North Indian Hindu love story recast as a Sufi tale for an Islamic court. There was a need to create a synopsis of sorts. That opened up this idea of, “Who gets to tell the story?” which also explains how I see us collaborating. For me, the story is open-ended; that’s how I paint. Ink is fluid and immediate. There is an urgency inherent to the material. Du Yun always has a big idea behind the music, and I find that incredibly charged—that a kind of navigational experience can enter the visual in ways that give it dramatic direction and specificity while keeping the story fairly abstract.

DY Thinking about how scenes unfold is critical to me. I often talk with Shahzia about operatic scenes or symphonic textures. There is a whole entity that drives the visual and music together. To answer your question about tradition, I actually grew up trained in Western classical music. I learned to play Bach when I was four years old, and learned the German, French, and Russian way of composing and of interpreting what symphony means. My work with Shahzia drove me to think further about the role of literature in artistic practices and how we can approach its subject matter through collaborations with regional musicians. This was, in part, what inspired my initiative FutureTradition. My training as a composer is to write a musical score, often with fixated notations. But with these collaborations you have artists who don’t read music, or even speak your language, and who often have never taken orders from a woman artist. All of these nuances are woven into our practices as well. For Disruption as Rapture, we did a live performance in Lahore, Shahzia’s hometown, engaging with boys and girls choirs from the city, who came from particular musical practices and economically from lower-income families. It was critical for me to share the stage with them. Their music is traditionally played in contexts like weddings; they are not typically soloists at art biennials.

SS The long history and practice of this devotional music in Pakistan comes from the Sufi and North Indian classical traditions, which were also referenced by musician Ali Sethi, who I introduced to Du Yun and who also collaborated on this work. The manuscript of Nusrati’s poem, which the piece is based on, is in the permanent collection of the Philadelphia Museum of Art. That provenance is very interesting to me. Historically, so many artifacts have been truncated and looted, and have arrived in Western art museums. I am interested in ideas of ownership and tradition, but not nostalgically. I’m concerned with how you take the virtuosity of a language and imagine it in ambitious ways, where it’s not an amalgam or synthesis of hybridity, but instead has an ability to encompass difference. That happens when we allow other voices to come in, like the children’s choir in Lahore or Arabic-speaking poets in Sharjah, but also in coming together as two individual voices, Du Yun and myself. The work has the capacity to contain us all.

DY When ragas, the miniature language, and Western operatic influences come together, people think the work is about where East meets West. It’s not about that, because we have met already. It’s about going into language itself and having a new set of conflicts.

SS Yes, I’ve always felt that the work is centering its own history. It is the center in and of itself. 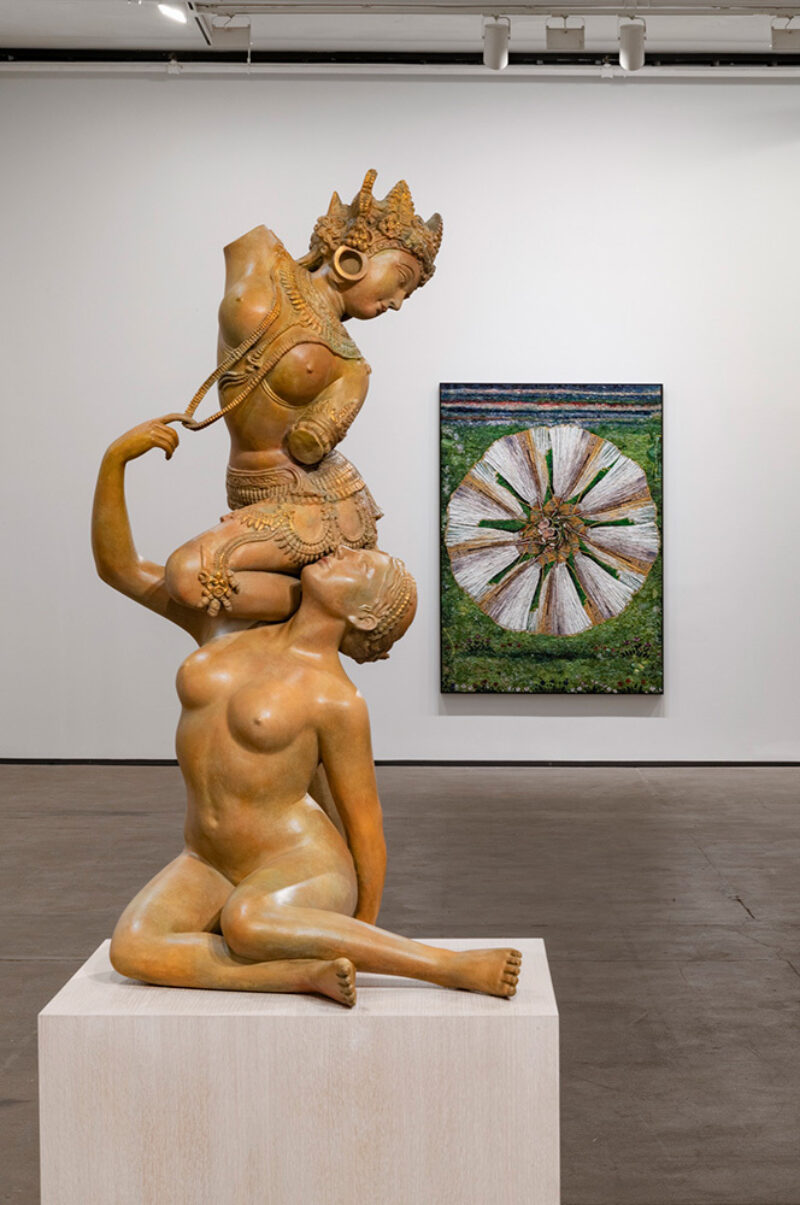 AT Shahzia, you recently created your first-ever sculptural work, Promiscuous Intimacies (2020), a bronze rendering of a Greco-Roman Venus and the Indian Devata intertwined in a suggestive embrace. The radical intimacy of women, across disparate geographies and time, feels incredibly potent in this piece.

SS The piece is completely related, as it’s this glance backward—a way of emphasizing that tradition, culture, and identity are always in flux and not static. It’s a playful relationship between two feminine representations that are often burdened by their representations across history. That playfulness is also about how non-heteronormative desire is not out of the ordinary. It entwines outcasts from Classical Western art history, as if Mannerist and Indian aesthetics are accomplice witnesses of a one-sided history.

AT Turning to your newest collaboration, Reckoning (2020) is an epic address of human conflict and ecological ruin. In it, a joust between two figures swirls through a landscape—the tension of opposing forces awaiting conclusion or release. I was struck by a feeling of both the depth of history and a very contemporary existential condition within it—that the endurance of imperialism and racial capitalism has brought us to a place of near-planetary collapse. Did creating this work channel or transmute some of the realities that this year has brought?

SS Our work is always in tune with sites of crisis both within and outside of America. That angst from this year is there, but we had recorded the music sung by Pakistani female vocalist Zeb Bangash in 2018. I was obsessed with that dance between those two characters for a long time, which encompasses ideas like the relationship between father and son, warfare, migrancy, and memory. The song itself is about what it means to return to the earth, but also a space of death. In the animation an uprooted tree moves through water. Its sinuous, serpent-like nature could evoke the biblical nature of Adam or Eve, the expulsion, or the sea as a space of peril where in the annals of time and history colonial trade and theft occurs.

DY The work says a lot about femininity, too, in its navigation of conflict and the father-son dynamic and with the inclusion of Zeb’s voice. Growing up, there was no place for me on our family tree. I’ve always had to figure out what my position is myself. In this country I think it’s particularly empowering to see women from the Asian continent collaborate. Our identities and names are a burden, but also a freedom. And I’m choosing to look at it as a freedom, because that’s the new landscape of America that I want to live in.

Allie Tepper is a curator and writer working between New York and Chicago. She has organized exhibitions and performance programs for the Walker Art Center, Whitney Museum, SculptureCenter, and Triple Canopy, and is the co-editor of Side by Side: Collaborative Artistic Practices in the United States, 1960s–80s (Walker Art Center, 2020). 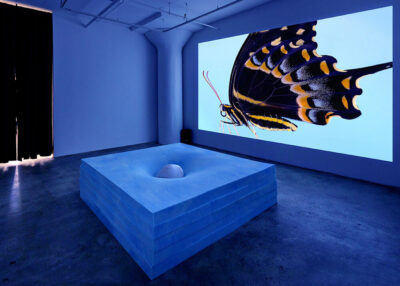