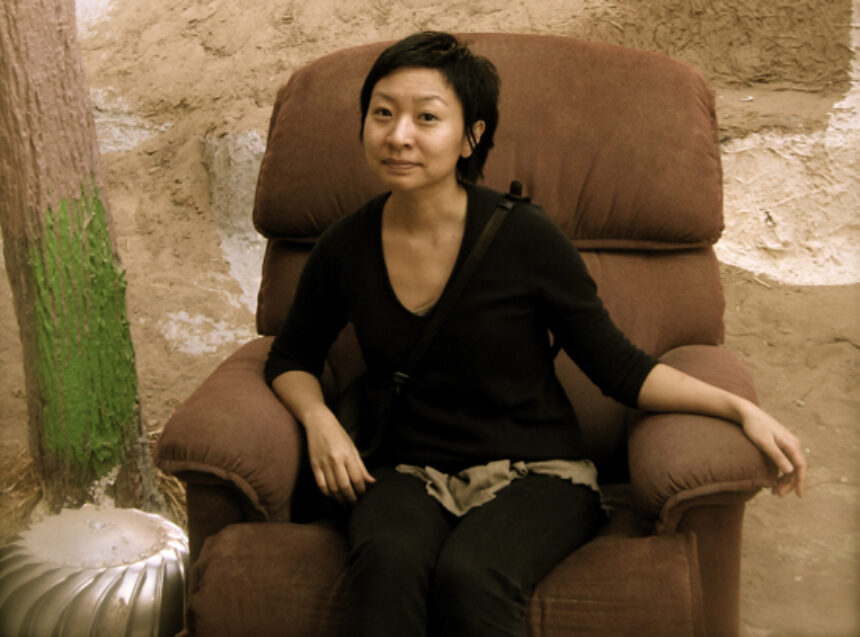 I first encountered poems from Cathy Park Hong’s Engine Empire in an issue of the electronic journal Triple Canopy, where the poems stood alongside the video art of Adam Shecter as “Forecasts.” The videos were spun and crackled under heavy filters. The poems fast-forwarded me into a future which might have been similarly disorienting, but was so deftly rendered that the confusions felt familiar, the technologies not a distraction from but a sounding board for the familiar, resonant noise of human relationships. Exploring the rest of the book led me into two other landscapes, both just as well-drawn and as mysterious. Over the western frontier of the United States, an industrial city in China, and an imagined future state of California, Cathy makes narratives flash and craze like heat lightning. This spring, she was kind enough to answer a few questions.

Elsbeth Pancrazi Engine Empire has a few different settings—the American West, present-day industrial China, the future in California—all of them frontiers. How did you begin to think in terms of frontiers? I’m curious about whether you deliberately set out in this direction, or realized at some point that it was a preoccupation.

Cathy Park Hong I’ve always been preoccupied with the frontier. It’s such an American trope first of all. And I like to think of the frontier as being on the borders of language, body, and land. Lyn Hejinian wrote, “the border is not an edge but rather their very middle—their between; it names the condition of doubt and encounter—a condition which is simultaneously an impasse and a passage, limbo and transit zone.” My poetic consciousness rests in that transit zone.

But I didn’t initially think of the frontier as a theme. I had terrible writers block, and I was living in LA at the time, which is where I’m from. I was watching westerns, reading westerns, and then I began to write westerns. From there, I leapt to an imagined China as a frontier, which was again more intuitive at first. Years ago, I spent some time in China, in this Northern border city called Yanji, where I was a journalist writing about North Korean refugees illegally living there. It struck me as very Wild West: there was no regulation, it was lawless, cars were driving on the wrong side of the street, undercover North Korean agents lurked around dim hotel bars. It was hot and there was dust everywhere. My friend and interpreter got drunk one night at a foot massage parlor and lost his passport, and he was too drunk to remember which parlor it was. There were like 900 parlors in that city. His friend, who owned a hair salon, recruited his gang buddies and they fanned out and searched every parlor. One of the guys found it but he had to get into a big brawl with the parlor owner who wanted to keep it and sell it for a lot of money. Strange things like this happened everyday.

EP Speaking of industrial China, I want to ask you if you heard the hubbub about the episode of This American Life concerning the factories where parts for Apple products are made. The show—their most listened-to episode ever—was retracted after producers found that the correspondent fabricated parts of the story. But maybe instead/in addition I will ask you more generally what you think a poet’s engagement with current events and politics should be. More specifically, what’s your relationship to politics?

CPH Inevitably, as more channels or more portals to information are opened, the more we become swallowed by the arena of commerce and lose our intimacy with the human encounter. We lose clarity, and most of all, our empathy. Poetry offers the possibilities of clearing those obstructed passageways and reviving our attention to what matters. The poet is a tenant of culture. You’re engaged with politics even when you claim that you aren’t, even if you’re writing ekphrastic poems about Flemish paintings. That’s always a choice. Nicolas Bourriad said, “Art was intended to prepare and announce a future world: today it is modeling possible universes.”

I’ve given a few talks about speculative poetry. My own way of engaging with the present is building these speculative landscapes. I build worlds to critique world building. But recently, I’ve been returning to Bourriad’s idea of relational aesthetics—it’s been exhaustively thrown around in the art world, but I think it can be a fresh way to think how poetry can engage with society. What could be a relational poetics? How can we create alternative ways of behavior, beyond the reading, the university institution, and conference? How can we push the spoken poem beyond its scripted time limit to models of living that are more interactive? And how can the human encounter become its own procedural form in poetry? Not that any of this is new—I’ve been seeing exciting collaborations and readings in Brooklyn, and there’s been so much that’s happened with Occupy and the human microphone. It’s just my recasted way of thinking about poetry as happenings.

EP Engine Empire uses the serial poem, or cycle of poems, or—well, I’m interested to know what you call it—to establish these three different worlds in the three sections of the book. Can you say a little about how this structure helps you to approach subjects?

CPH I thought of the book as a trilogy though that’s not accurate since it’s not three different books. But that was how I had it in my head. Another way I thought of it was as a triptych. At the time, I was obsessed with Pessoa, and I was also reading David Mitchell. I was interested in not just writing different serialized poems but creating very distinct sections that had their own genre, styles, setting, and voices. I just read somewhere that we live in an era of coexistence, and I wanted to explore how different created scenes, histories, and languages can coexist to reflect the present time we’re living in. Some may find that the western section to be really narrative, but I wanted to begin like that, and show how as time and history progresses, narrative begins to derail. I also wanted to explore narrative genre as a constraint. What are the expectations in westerns or science fiction, and how can I subvert that through the lyric medium? It’s fascinating, for instance, how these popular genres evolved with history. Sci-fi was obsessed with space travel during the Cold War but now the frontier has become internalized. Did you hear about the Chinese kid who sold his kidney for an iPhone and iPad? It’s like a bad cyberpunk novel, the most obvious exchanging of the material body for virtual information. 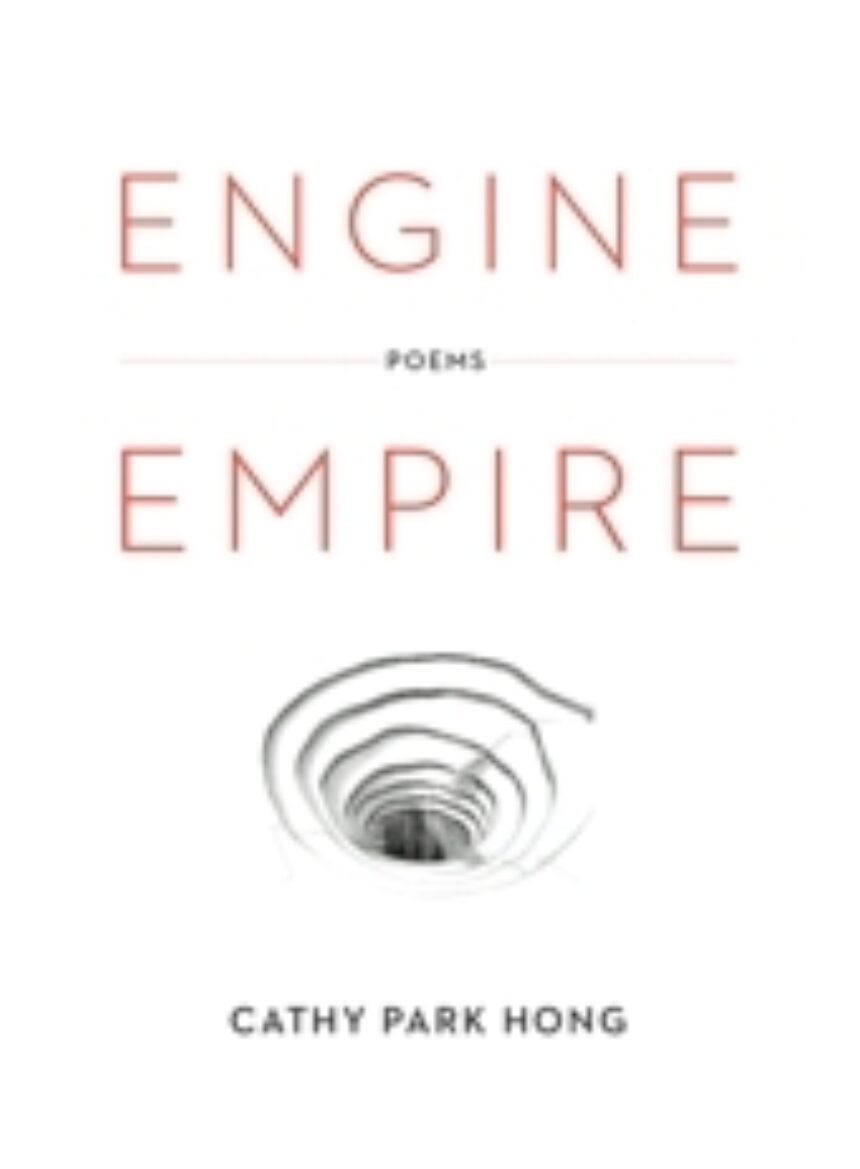 EP And then, on the flip-side, the challenges of putting together a series of poems?

CPH Well, if one caboose is faulty then you got to fix the whole train. The failure is that much bigger. Not easy to scrap the series because of the commitment you put into it. It’s like what Berryman said right? For the long poem, “the prospect of ignominious failure must haunt you continually.” I like to court failure though. It scares the hell out of me since then that’s what inflames the imagination. For awhile, while writing Engine Empire, I was writing these three different sections, and I was scared shitless that the three wouldn’t go together. Or when I was writing Dance Dance Revolution, I was constantly thinking I was going off the rails with the guide’s voice.

Young Jean Lee, the playwright, talks about how before each play, she thinks “What is the worst thing I can possibly write a play about” and then she goes ahead and writes that play. For instance, she wrote a satire about black identity which is quite a risky thing to do for a Korean American woman. But I think that’s necessary for a writer—you have to go into that discomfort zone. Now I’m thinking what’s the worst thing I can possible write? For some this is a comfort zone, but for me, my discomfort would be writing autobiographical love poems, which means I’ll have to write them sometime in the future.

EP What’s your next frontier?

CPH The next frontier is the ’90s.

The video artist Adam Shecter and poet Cathy Park Hong began to collaborate together in 2009, where they were both in the early stages in projects exploring alternate futures. The collaboration began intuitively: through conversation, book swaps, and contributions to each other’s works. This book trailer is one facet of their collaboration in which Adam created an animated video that’s a meditation on her latest collection of poems, Engine Empire.

Elsbeth Pancrazi is the Membership and Development Director for the Poetry Society of America. She serves on the editorial board of PEN Journal and sometimes binds books for Small Anchor Press.

“My feeling is that each time you’re in a collaborative relationship it’s different, and there should always be an energy that isn’t purely simpatico.”