With wit and heart, Keith Lee Morris’s stories explore the slippery nature of memory, its mutability and incompleteness. His characters are forever filling in the blanks, and where others might have to earn our empathy, they have it straightaway. 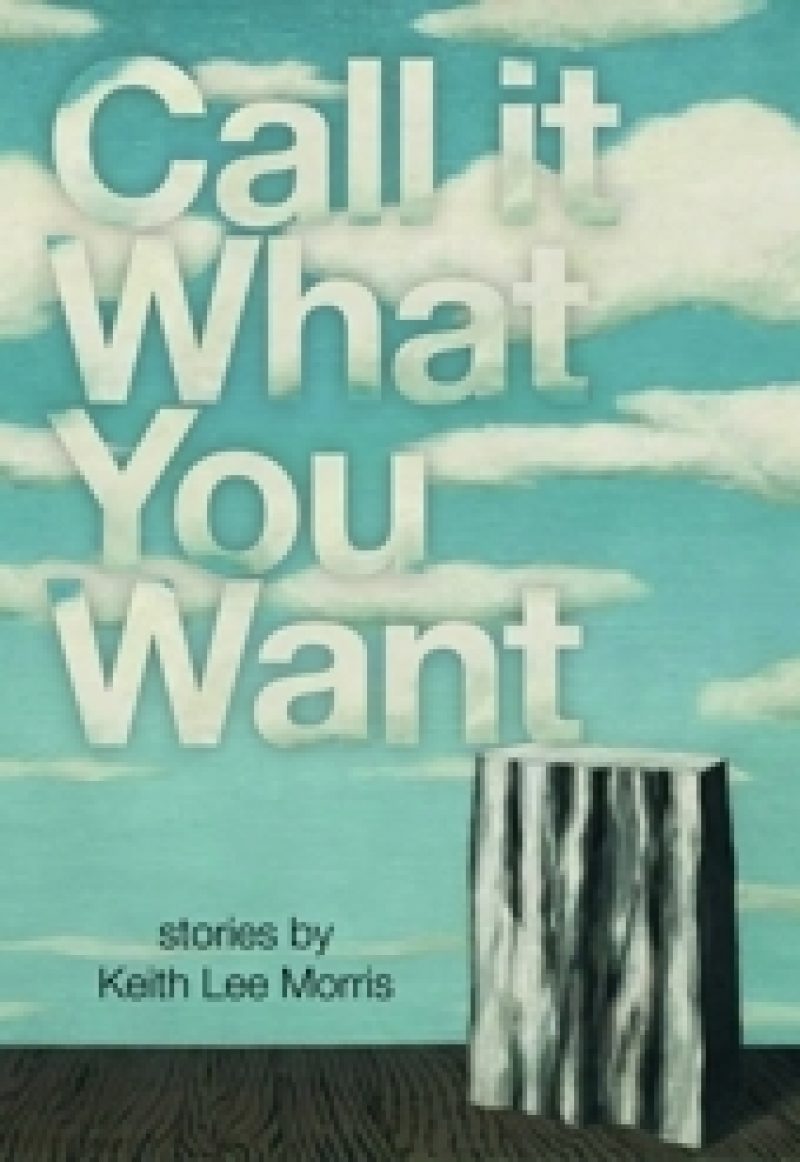 Keith is the author of two novels, The Dart League King and The Greyhound God, and two story collections, The Best Seats in the House, and, most recently, Call It What You Want. He lives in South Carolina and teaches in the writing program at Clemson University. When I called from Toronto last week, we talked about experimental fiction, second chances, and his new book, which travels far and wide—from Morris’s native Idaho to the French Quarter of New Orleans to the foothills of the Appalachian Mountains—following people who aim to get wherever they’re going before what’s coming catches up.

Emily Testa I usually skim epigraphs, but I thought yours was really interesting. It’s from The Sound and the Fury.

Keith Lee Morris It’s Benjy’s description of what happens when he dreams. It nicely described the space I was trying to write about, that gap between imagined reality and real life. When I started Call It What You Want, it was supposed to be an entire collection based on dreams. Some were more successful than others, so I decided to go with some stories in the realistic vein as well.

ET Were you writing from your own dreams?

KLM Yes. I knew I couldn’t plop a dream down on the page and call it a story, but I thought, the story will allow the dream to go where it seemed to want to go. For instance, in “Culvert”—”Culvert” came about because I had this recurring dream since childhood of walking down a dark hall and then into a completely white room. Then, more recently, I started to see my son’s bare foot in the room, just his foot. Other parts are easier to pin down. Where I grew up, in Pinehurst, Idaho, there was a flash flood when I was in fourth grade. We were all sent home from school, and my father went to help sandbag the creek.

ET When you write from experience, do you feel compelled to stick to the story as it happened?

KLM No, I try to move as far from it as possible. What might have happened is usually far more interesting than what happened. And I don’t write for catharsis. I wish I did. I’d probably write more.

ET What makes your stories and novels stand out to me is how fair they are. I had a writing teacher who once told me it was all right to make readers hate my characters as long as I loved them first, and I’m reminded of that every time I read your work.

KLM To tell you the truth, the people I’m writing about, I’ve known all my life. It didn’t occur to me to be offended by them. Ultimately, it’s my job, I think, to know them better than the audience does.

ET I want to talk for a minute about the way so many of your stories in this collection are structured—a character is stymied by something, led on a goose chase, sometimes literal, sometimes not. You pull it off without dragging your reader through some heavily plotted funhouse. You were an actor before you were a writer—does building a story this way satisfy an actor’s impulse?

KLM In order to answer that I need to tell you I was a horrible actor. I never learned to pull it off on stage. I could do it in rehearsal, and I think that’s why I continued to be cast—the director knew I could correct mistakes. I would have made a much better director than an actor. And when I started writing, it was much easier for me in the privacy of my own room with a spiral notebook to assume the position. But maybe I’m a method writer.

ET You create circumstances that could be, technically speaking, disastrous: a suicide and a child’s death in a ten page story, for instance. When I reference the “rules of writing,” I hope my medium-sized disdain for them is clear, but still, as a writer and as a teacher, how do you weigh the rules of writing fiction?

KLM I knew I was throwing a huge heap of everything you’re not supposed to do in these stories. As the editor of The South Carolina Review I used to call them the IV tube stories, where mom’s sick and the tubes are snaking everywhere and there’s this poignant moment and then she dies. I couldn’t stand them. But I’m always questioning why I’m not supposed to do certain things. There’s a rebellious strain among writers, young writers in particular, not to listen to what they’re told, and I’m not trying to feed into that. But because I started writing without anybody to teach me, I had one foot in the classroom and one ear out for what my teachers were saying, and my other ear was tuned to something of my own, and my other foot was out the door. I encourage my students to as soon as they hear a rule about writing, start thinking out how they might break it.

ET I had a friend who was told by Rick Moody that she only got three dream sequences in her entire career as a writer, and he couldn’t see why she’d go wasting them all on one story.

KLM Ah, the dream thing. Like I said, this collection started as a collection of dream stories. I eventually moved away from that, but in the beginning I just thought, well, why not? Sure, people are judged by their actions and the things they do, but then we spend so much of our lives in this other world. Writing about dreams is a window into it.

ET And in the dream stories you did include, the dreams start to feel very orderly and logical, anyway.

KLM John Gardner said something to the effect of, “When you peel away all the layers and get to the bottom of a good work of art, what you find is an idea.” So dreams or no dreams, there are ideas present.

ET Do you consider yourself an experimental writer?

KLM Sometimes. There’s a story that didn’t make it into this collection called “Diego Rivera Painted Our Living Room,” and it’s pretty wild. The experiment was clear to some people and not to others, and I guess whether it arrives at some place that makes something meaningful happen for the reader is the sign of a successful piece of experimental writing, as opposed to going further and further into this strange world filled with strange things that never come together. That’s how it’s always worked for me. Now, experiment for experiment’s sake, I don’t understand. For instance, I don’t get Bolaño. I’m puzzled by the attraction to that kind of sprawling narrative. It seems to want to go everywhere, do everything.

ET It starts to feel like the writer forgot about you.

KLM People who love The Savage Detectives must read in a certain way and it must be different from the way I read. I want the writer to be conscious of me. As a writer, I feel I owe it to my reader to be conscious of his or her experience, not by overtly trying to entertain them but by trying to stay focused, trying to maintain tension. Bolaño is comfortable letting go. Junot Diaz and The Brief Wondrous Life of Oscar Wao, same deal. When I’m reading about Oscar, I don’t want to go anywhere else. I don’t want to go away from my main character for a hundred pages, but Diaz keeps taking me away. I think younger writers have an easier time of picking up a book where narrative thread is not so apparent, books that adopt more of a collage approach. But some speculative fiction, alternate histories, slipstream, whatever you want to call it, floors me. Kazuo Ishiguro, Never Let Me Go—it floored me.

ET Me too. For me, good stories are made in the moment a writer is able to push me from where I started, which is inevitably somewhere in the realm of “this person is nothing like me, I don’t know him at all”, to “I know this person.” And for me, the joy of reading your stories is that you deliver one better—not “I know this person” but, more often than not, “I am this person.”

KLM Once, in graduate school, Victor Cruz was commenting on a story of mine that ended up being published in The Best Seats in the House and he threw the pages down on the table and said, “I’ve been every character in that story.” That’s the nicest thing anybody’s ever said to me. And if it’s true, then it’s the reason my characters work, if and when they do.

ET In Call It What You Want, we’re always placed at the edge of some emotional plate that’s about to experience a tectonic shift, and we move with it—there’s murder, there’s infidelity, there’s losing a child. Visits from dark angels. Fissures in the space-time continuum. And I believed every word.

KLM I probably think more about my readers than most writers do. I’m conscious of how I think characters are going to be perceived, and I try to manipulate those feelings and outcomes. It’s probably one of my weaknesses. But I do write certain stories without trying to pin down the outcome. I don’t always have specific ideas about what I or anybody else is supposed to feel at the end. Another professor at Clemson assigned one of my stories and these students came to me with questions before they started their essays. A man falls in a sewer and lands in something like heaven, can you explain that? No, I can’t.

Call It What You Want is out now from Tin House Books.