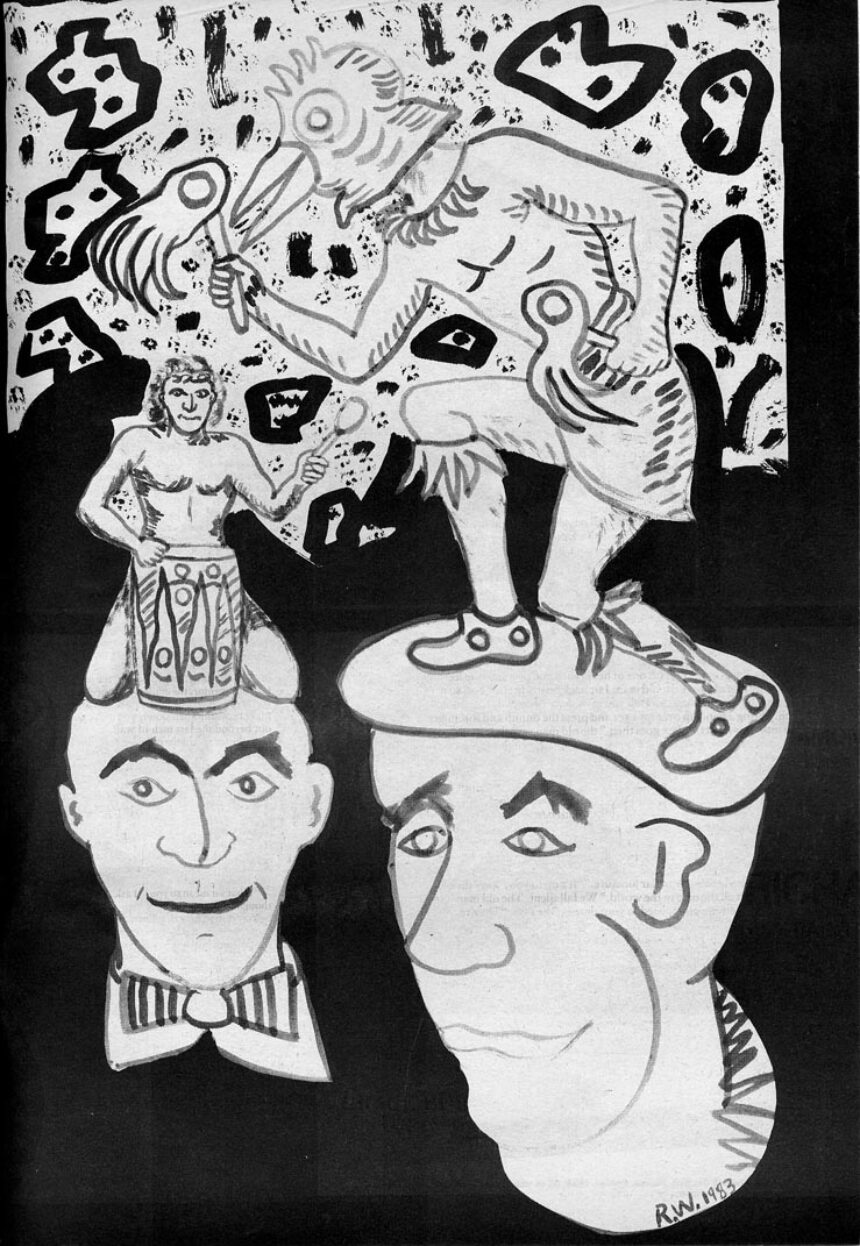 “I need another match,” says the girl. I look in the match box. “This is the last one …” I tell her. I watch her crouch on all fours by the drapes at the north window. She scrapes the match along the floor and stabs it into the hem of the drapes. She scrambles back as the flames gulp and begin leaping upwards. I look at the incipient conflagration with a knotted brow. “I hope this is going to work,” I mutter. “It will, it better,” says the girl. The fire throws a wavering light over her face. We grimace in silence, facing the undulating, already towering flames. I feel a tap on my shoulder. Startled, I look around. It’s a little, gnarled old man in a pork-pie hat. He grips my sleeve. “I’ve worked out a theory of comedy,” he mutters urgently. “I’d like to expound it to you.” “What, now?” I protest, pulling my arm free, appalled. “You can’t see we’re right in the middle of something critical?” He looks confused. Hesitating, he moves off. “Who on earth was that?” says the girl. “I haven’t the slightest idea,” I tell her, scowling fretfully at the whole business. “And take my word for it, under the circumstances trying to find out would only be a tedious, futile exercise. It would undoubtedly confound us both and try far more patience than we possess. It would entail countless, fruitless appraisals of detail piled upon detail. It would ensnare us from now until doomsday in endless, dreary—” “Alright, alright,” says the girl. “My god already!” In silence again we turn toward the flames. The girl passes a hand over her face. “Jesus, it’s hot,” she mutters, undoing the top of her blouse.

In the morning I can’t get her to move. An acrid, grey precipitate fills the air. I kneel beside her on the sooty carpet, slapping her wrist. Her eyes are fixed half-shut and her upper lip is pulled away from her teeth. I can’t see any movement to her chest. “Was it something she ate?” asks the old man, appearing as a pair of trouser cuffs and knobby ankles on the other side of her. I look up and give him a glare of baleful disbelief. “It’s a bad time of year for a lot of things,” he adds. “We haven’t had a thing to eat for 36 hours!” I hiss savagely. “Oh, that must be it … ” he says. The girl’s color is slowly turning a pale, glassy grey, the color of dirty ice. I lean forward over her and lift one of her eyelids and peer into the leering pupil. “She’s dead,” says the old man. I sit back on my heels. “Yes, so it appears,” I mutter. “Now can I tell you my theory of comedy?” he asks. I flinch. I bring a hand up over my eyes and press the thumb and forefinger deep into the sockets. “Here goes then,” the old man says, interpreting my silence as a tacit go-ahead. “Comedy is a way for people to neutralize the terrible anxieties of life.” I remove my hand slowly from my eyes and stare at him. “You can’t be serious,” I snarl. “That’s the most simpleminded, fatuous thing I’ve ever heard, it practically defies description!” He shrugs. “That’s my theory,” he says. “She was a good-looking girl. Your fiancé?” I look down at the stiff, ash-spotted face on the carpet. I shake my head, full of somber reflection. “Let’s say ‘a friend of a friend’,” I mutter wearily. I sigh and make a small, weary gesture with my hand. “To say anything further would demand too arduous an exposition right now; it would require a prodigious delicacy of articulation too formidable for me at this particular juncture.” “It’s up to you,” says the old man. “I’ve got all the time in the world.” We fall silent. The old man looks around. “Something’s happened to your drapes,” he says. “They’re wrecked.” “Because we set them on fire—you old fool!” I exclaim ferociously. I get to my feet, waving a space in the airborne ashes. “As a signal. We’ve been trying to get out of here, or didn’t you happen to realize?” “Why don’t you just use the door over there?” he says. “What door?” I rasp. I look around to where he points. My mouth falls open. “But—but how could we have missed it?” I stammer. There is a door in full view, with EXIT painted on it in red block letters. I start towards it, in a daze. “Kitchenette over there too,” says the old man behind me. “The fridge is probably full, in case you’re still hungry.” I gape about dumbfounded. Through the wisps of floating ashes I see a refrigerator in an alcove, flanked by a sink and a stove. “But how can this be?” I mumble. “I’ve worked out a couple more theories, about other things,” the old man says, coming over and putting his elbows on the breakfast nook. “But I’ll wait ’til you’re finished eating. Watch out for the bones in that chicken.” He turns and gazes back along his shoulder at the room. “Too bad about the girl,” he says.