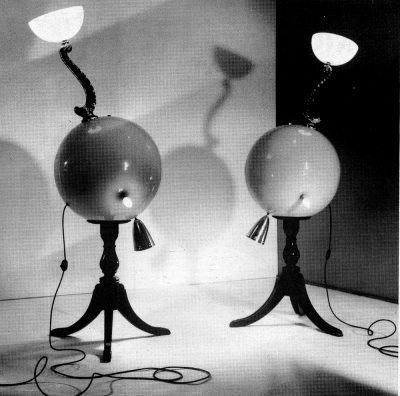 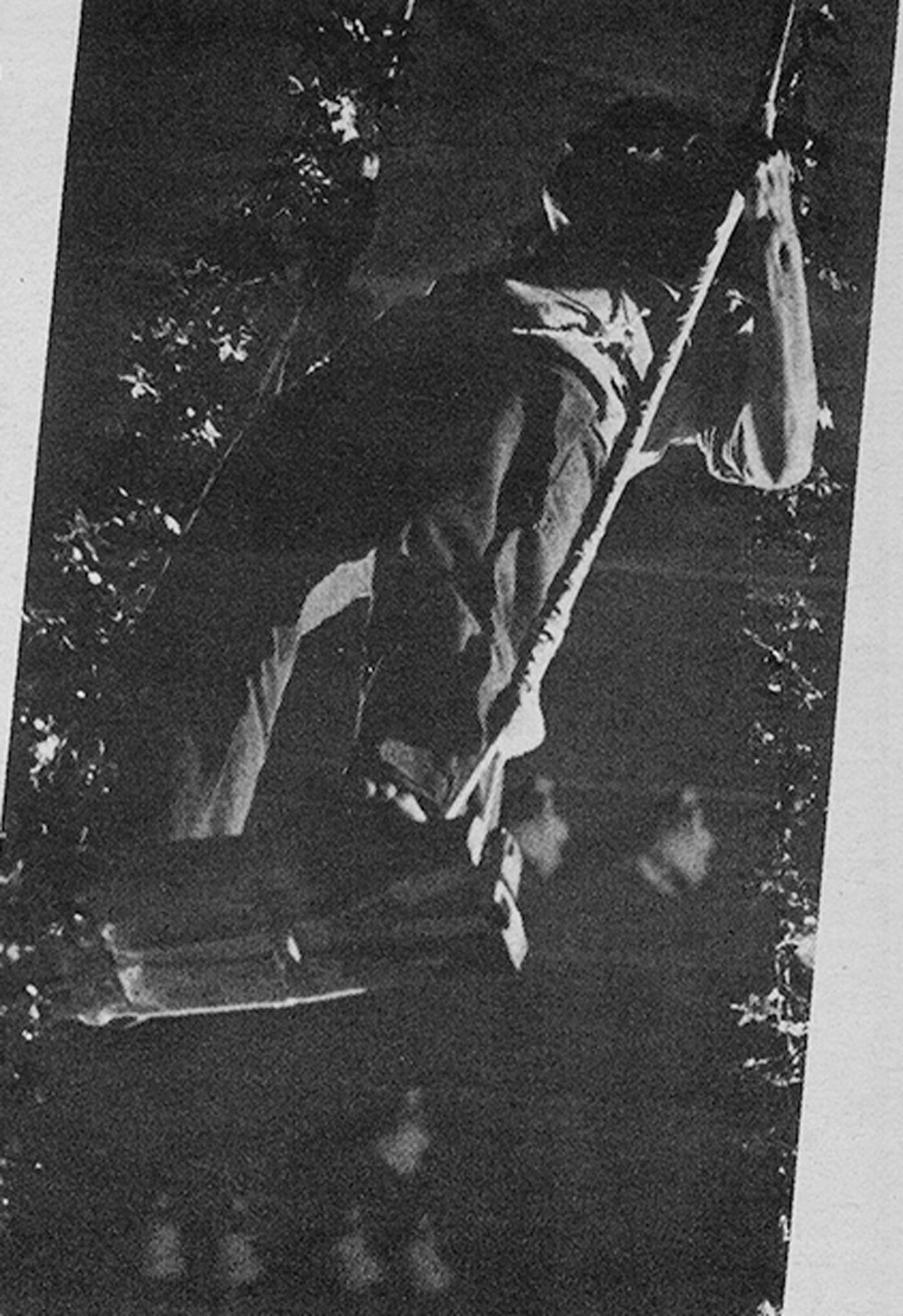 Location: the spiral museum as space ship, audience below in the past looking up at a scroll unwinding on the different tracks, the ramps, the corridors, where illusion occurs …

Scene I: Darkness in the corridors above, the sound of a struggle, metal on metal, a flash of bright light, male and female voices speaking through megaphones:

Descending silently they run, their increased weight slowing them until they land at home.

The woman, in pink, arrives at the compartment of the scientist, in green.

Curious, she asks him, “What is the reason for the upper corridors, and who are the mutants?”

He sings the song of creation (a myth of the ship’s origin to comfort the farmers), she dances to radio observatory sounds.

“Your head was too big, but I saved you. You were to be a scientist. You must be instructed in right thinking or you will deviate. You must never explore the corridors above this level. The mutants are a gang of renegade wizards. They call themselves ‘The Double Lunar Dogs’—they will capture you and put a spell on you.”

She answers: “But these visions of strange vistas and great distances where I am on the outside and not the inside.”

He: “Look out! Those destructive fantasies must be eradicated.”

She devours the ancient texts on the track of an undefined secret—Basic Modern Physics.

The scientist: “This is one of the most valuable of the sacred writings. Our forerunners were romantics.

Their truths were handed down in allegorical language. Gravitation, for instance, equals love.” (A couple embracing, a love story told backwards.)

“Two bodies attract each other directly as a product of their mass. Out of sight, out of mind.” he drones.

She asks, “What about this trip mentioned in the books, and what is this planet earth?”

He: How can that move against which all else moves? The ancient holy men (the first wizards) invented fantastical worlds and called them heavens. Supposedly a vast space with pinpricks of light outlining mythological creatures. There is no trip, no earth, only the here and now on this ship … this is our world.

Yes, she could see the wild extravagance in these astronomical fantasies, but why so heavy in the village and so light in the corridors. Floating was pleasure—and these nagging flashes of blue over soft green fields—but she put aside such fantasies and plunged into the here and now.

Scene I: In the corridors, part way upon a research program to wipe out mutants, she floats dreaming of friction and electricity.

Sounds of her capture by the muties—she does not struggle.

Scene II: In the compartment of the Double Lunar Dogs.

Blue light, pale moons, stars line the silver walls, her dress is red. The Dogs (men and women and children, Queens and Kings of the long forgotten snowy lands) surround her.

“You can’t accept things as they are,” they say.

“What does the trip mean to you?” they ask.

“An illusion for those who dream beyond the here and now,” she answers, “and dreaming is wrong thinking.”

“Did it ever occur to you that the ship is going somewhere, that it’s actually moving?” they ask.

“That’s impossible, the ship is already everywhere. The only meaning is spiritual.”

Dogs: “Imagine a place bigger than the ship. A place with the ship moving inside of it.”

“No, there would be emptiness all around.”

So many vaguely familiar images on the walls.

They take her higher to no weight moving like fish, like spiders on a thread. She notices that the ship is a giant cylinder with great columns supporting enormous weight.

A sacred and taboo place whose location had always been a mystery. It takes a long time to open the big round door.

They lead her into an enormous silver sphere with the machinery of the controls floating in the middle—time slows and turns around—she is frightened, this is not her territory. She has never experienced such height. They sit in front of the central panel.

“We’re going to show you the stars.”

The mirrored stars look down.

Light after jeweled light on dangling mirrors, she hangs alone in the center of the stellar universe …

The muties laugh, the lights go on …

Her heart pounds, her chest aches, things will never be the same—this unbearable yearning.

“That’s it, that’s the universe. Some of those stars are bigger than the ship.”

She stays with the Double Lunar Dogs rereading all the old books in the silver blue light, stories of the earth that trigger elaborate landscape fantasies, dry and wet and hot and cold walking on the outside.

She dreams of climbing out of the ship and walking the surface of the moon. The full moon. Tides.

“Why is it heavier in the lower levels?”

They show her books on centrifugal force, and the art of astrogation … They read to her of light years and spiral nebulae, of galaxies, of solar systems, curved space, of light and dark and sun, of snow and ice and wind and rain …

Where it is either very bright or very black.

The Double Lunars finally take her to the highest point, the most direct view of the stars which appear to move in circles due to the motion of the ship.

“Let’s get the ship moving again—finish the trip, find the planet” … thinking the people in the village will help. They give her a knife and escort her down, down.

Scene I: The Corridors.

Sluggishly she wanders through the green plants looking for old friends—they are grey, having aged more rapidly than her.

She tells the ancient scientist what she has seen in the upper levels—he does not react.

She falls asleep and awakes to find herself a prisoner, her knife gone.

The way things look according to where you stand.

“She is no longer a scientist. She went over to the muties and has returned to preach heresy, seeking to undermine the authority of our colony.”

“But you can see by the stars that the ship is actually moving, that we were on a trip from one planet to another.”

“Your head was always too big for your body.” And she is condemned as a heretic to die.

An old friend is allowed to visit and she persuades him to seek help from the Lunars.

Her friend climbs half way and is captured by the Lunar Dogs in dim light.

In the red compartment of the double dogs they agree to help in the rescue.

Outside the jail—with a magic formula they overpower the guards and open the door.

Scene IV: Battle and Journey to the Top

Flashes of red and blue light—sounds approaching, receding like signals …

Fighting on the lower ramps is heavy but as they ascend it lessens and finally free of her captors, they take the new recruit to the captain’s veranda where they show him the stars through glass.

Excerpted from a text by Robert Heinein.

I'm Not Alone, I've Got The Clone by Rachel Pollack

Scene I. This could be a room in any corporate office. Dark red couches, strewn here and there like the small rugs below them, light up the grey of the walls.

Chaos In Order by Craig Gholson 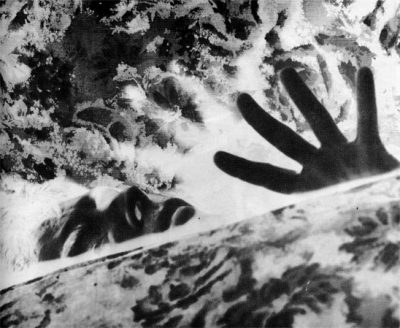