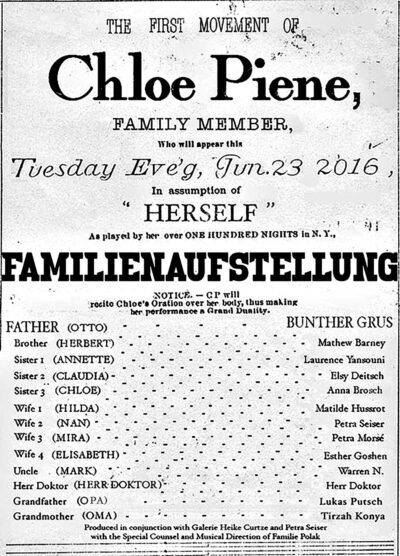 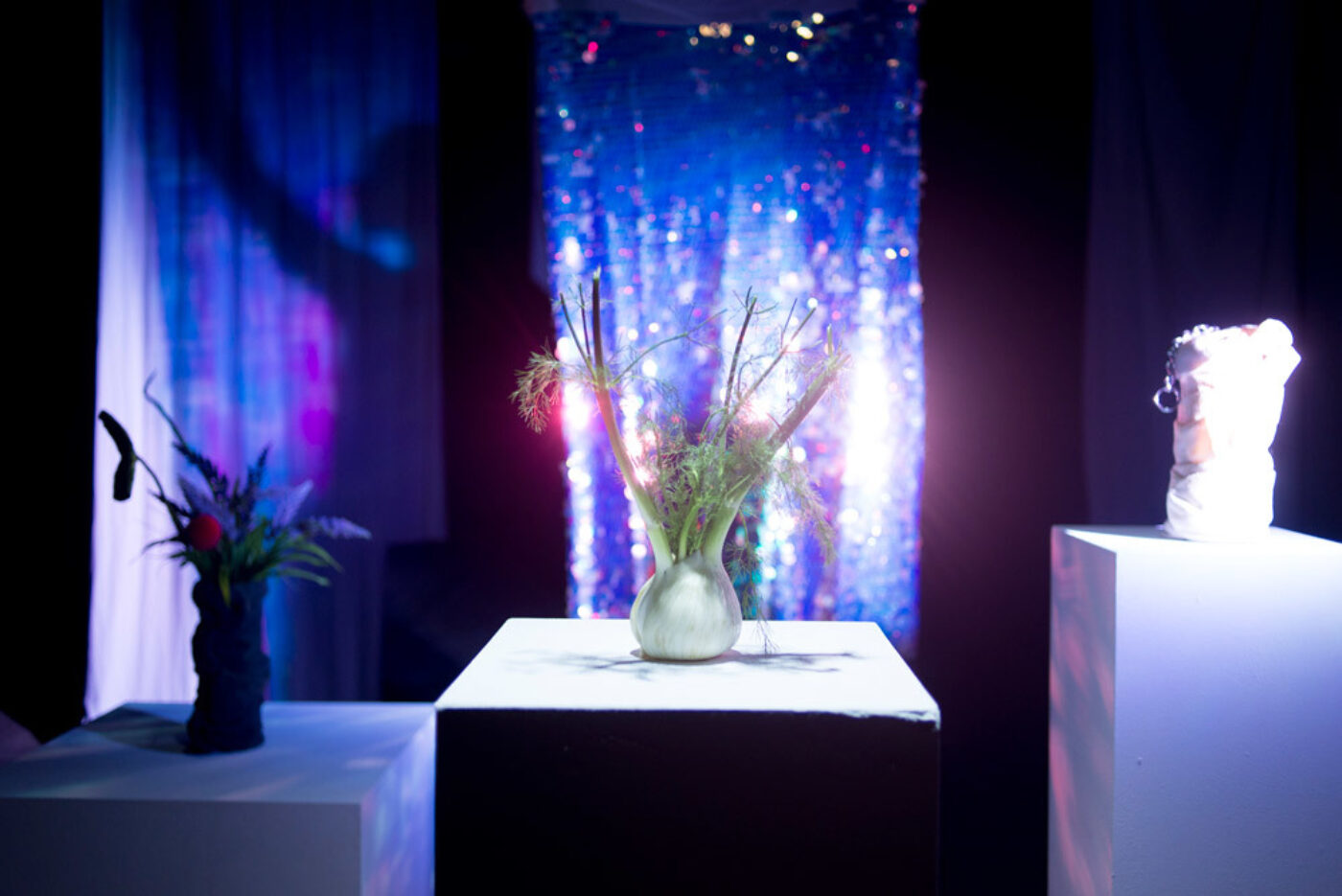 Isaac Pool’s work is funny, but also a redemption—all those Miss Worlds we’ve watched break and burn are standing strong among wisps of cellophane and glitter. His sculptures, performances, and writings are complex—a sweet, sweet fantasy where seemingly casual objects upend the mechanisms of persona. The sculptures are an American Arte Povera of dollar-store glamour that insists on a place in contemporary aesthetics. We sat down in December to talk about his upcoming play and concurrent exhibition at the Knockdown Center, about objects as markers of identity and Cool Ranch Doritos.

Jeanine Oleson I watched the trailer for your show, and it reminds me of a Mariah Carey Christmas special on Lifetime. It was very much the aesthetic of a specific cultural femme-ness.

Isaac Pool Totally. I think the play is all about sentimentality and attachments to pop objects.

JO The relationship of identity to the objects, the vases and head of fennel that are the stars of the play, seems to grow but not through direct address. The section when the vase character, Dirty, says, “‘You’re glowing’ / when said to a man / can’t equate to congratulations / to gestation or pregnancy / but only proximity to that test.” I was thinking about this idea of what and who something is—is being dismantled categorically—that’s the transgression that’s taking place in a lot of this work. Or this line with the character Grey: “Yeah gay people face it too, yeah.” A needing to insert oneself into a discussion where everything has to be related to individual experience. I’ve always noticed that your writing takes those little slips of language where the subject is compelled to qualify themselves. How do you choose language?

IP I think about personality, the desire to have a controlled identity, and how people aren’t conscious of the modes of control at play when they position themselves in a certain identity. I listen to people around me and pick things up that I hear in conversation, statements that are self-serving but intended to be altruistic. I write exclusively on my phone in Notes, and there’s an immediacy there. I’ve been thinking about écriture féminine, and the word “écriture,” which means both writing and to-write, this inherent relationship to the body.

JO In some way when you’re talking about écriture—where the action and the subject become combined—that’s what the cast of objects do, too. In the play, they are the subject, and they’re making the subject through language. Something that I’ve always thought about in your work is how you trouble an older gay aesthetic of thinking about women as a kind of star or diva. How are you thinking about that in the play with Fennel?

IP I’m both self critical of, and informed by, diva worship. My identification with Mariah Carey is a totally serious thing that I know is fraught, but it doesn’t mean that it’s apolitical. So it’s a bind between those things: wanting to be something that’s masochistic, but also finding joy and space to create poorly with those parts. Mis-performing that relationship becomes a way of resisting.

JO It becomes the cut-up version or the collaging with all of its obvious edges.

IP Yes. Courtney Love is one of my favorites because she’s been both the anti-diva and a completely Hollywood persona. You can see very clearly how the world affected her, and I love that porousness. I think the same thing about Britney Spears. She was a big part of my coming of age; I identified with her through the teen peaks and super-low Cool Ranch Dorito and Newport cigarette moments that I was also having.

IP Who is a saint.

JO I agree, thank you.

IP They’re both very aware, and Mariah is aware, of this level of mimicry in what they’re doing. They’re in control of their persona by exacerbating it—both giving you what you want but doing it to such an extreme that it becomes the undoing of that performance. That attitude is something I’m really interested in, and I’m suspect of discourses of feminism where representation is automatically assumed to be political. There’s a self-importance where having a lifestyle becomes a politic. Even that word “lifestyle”—it’s extremely powerful, agentive, and also this detrimental Enlightenment thinking that being a subject is somehow the goal and is going to save you.

JO I feel like you’re trying to make something where everything is in relation, even the materials of one object are in relation to another. So what’s interesting about the diva moments is that it feels like it’s taking apart the construction of relation within the spectacle.

I like this part, “I’m very Christian, / I’m all about a home makeover show. / I buy that narrative, / even the color scheme—khaki and sky … / I feel like I live in a remodel, / before and after.”

IP That’s about redemption. And I relate this to my own experience being raised evangelical. My parents were burnouts and then got saved, and evangelical Christianity was one of the few choices to deal with life in working-class America. It’s so much about whiteness and aspiration for a certain middle-class life that is very quiet and clean and sterile, very HGTV.

JO It’s redemption capitalism, this narrative of “possibility” through reproductive labor. The play ends with a stanza about the maintenance of a home. “Just asked myself how to dust, / couldn’t find the handle / then thought: / but am I molting?’” It’s this return from the world back into a body; it feels like a redemptive complication of understanding the borders of the body. Which is to complicate it: are objects discrete? Probably not. Is the dust of the world, that constant moving, just as affective and complicating of the subjecthood of an object?

IP And what would it be to claim that subjecthood. 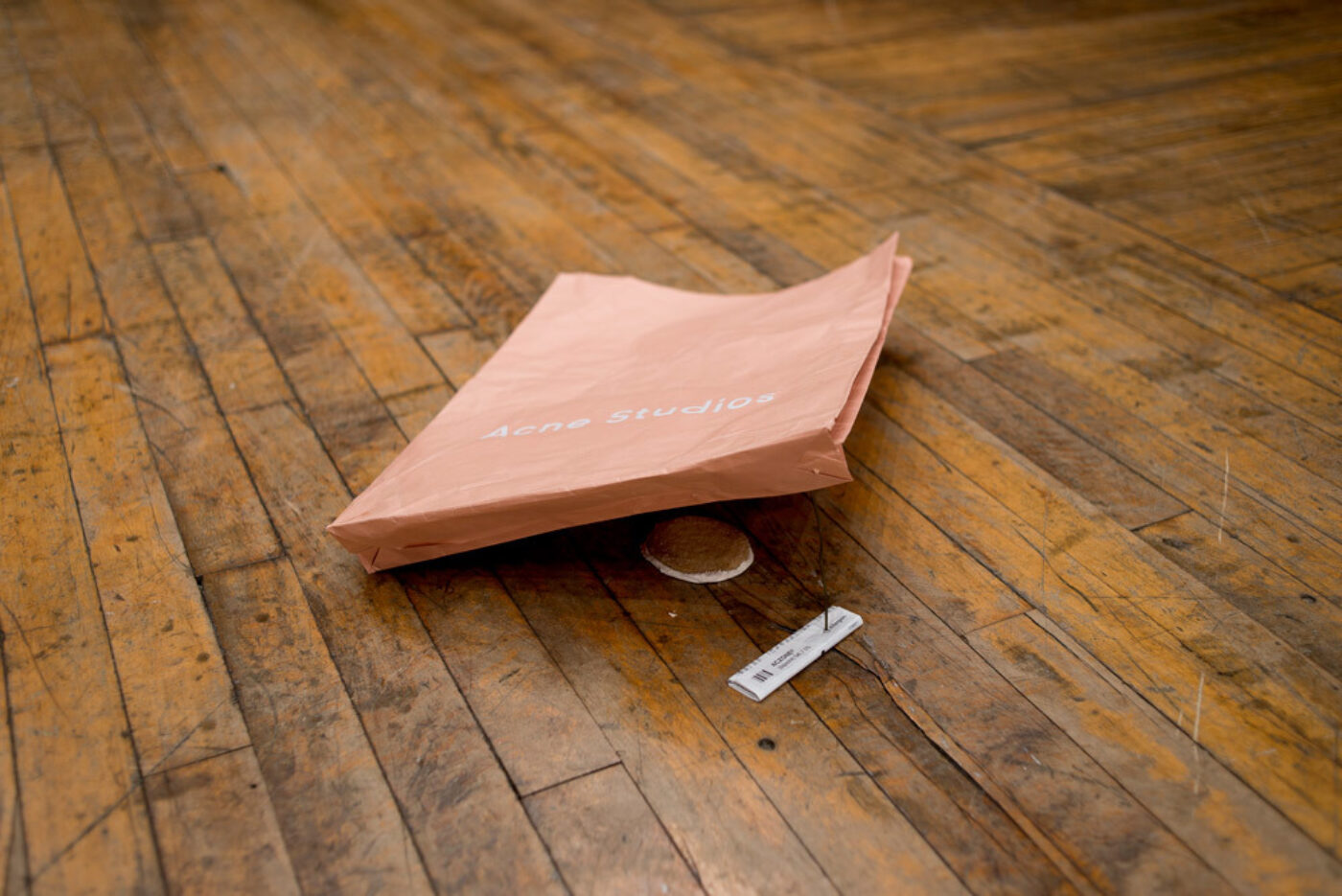 JO How do you think about beauty and the notion of beauty in all of these objects?

IP I think about making the objects as elegant as they can be, and it’s interesting because people read an irony in the materials as if I am critiquing them as trashy elements of consumer culture, and I always have to be like “No! These are objects of love.” These are things that I appreciate, and that is part of the world that I came from. A work called The Promise is the crux where I feel like I’m getting away from one classed background where the dollar store is the primary place to another where there’s an Acne Studios bag and an info packet from a prescription face cream that the wire is resting on.

JO Is that a pancake underneath?

IP It’s a plastic cookie with spackle and foundation smeared on it. It’s the bait in this cartoon trap. I saved that Acne Studios bag—there’s something precious about those materials, but they have to be in negation somehow. Whereas the other objects are loved and exist as-is, these elements exist as danger. It’s clearly a trap. 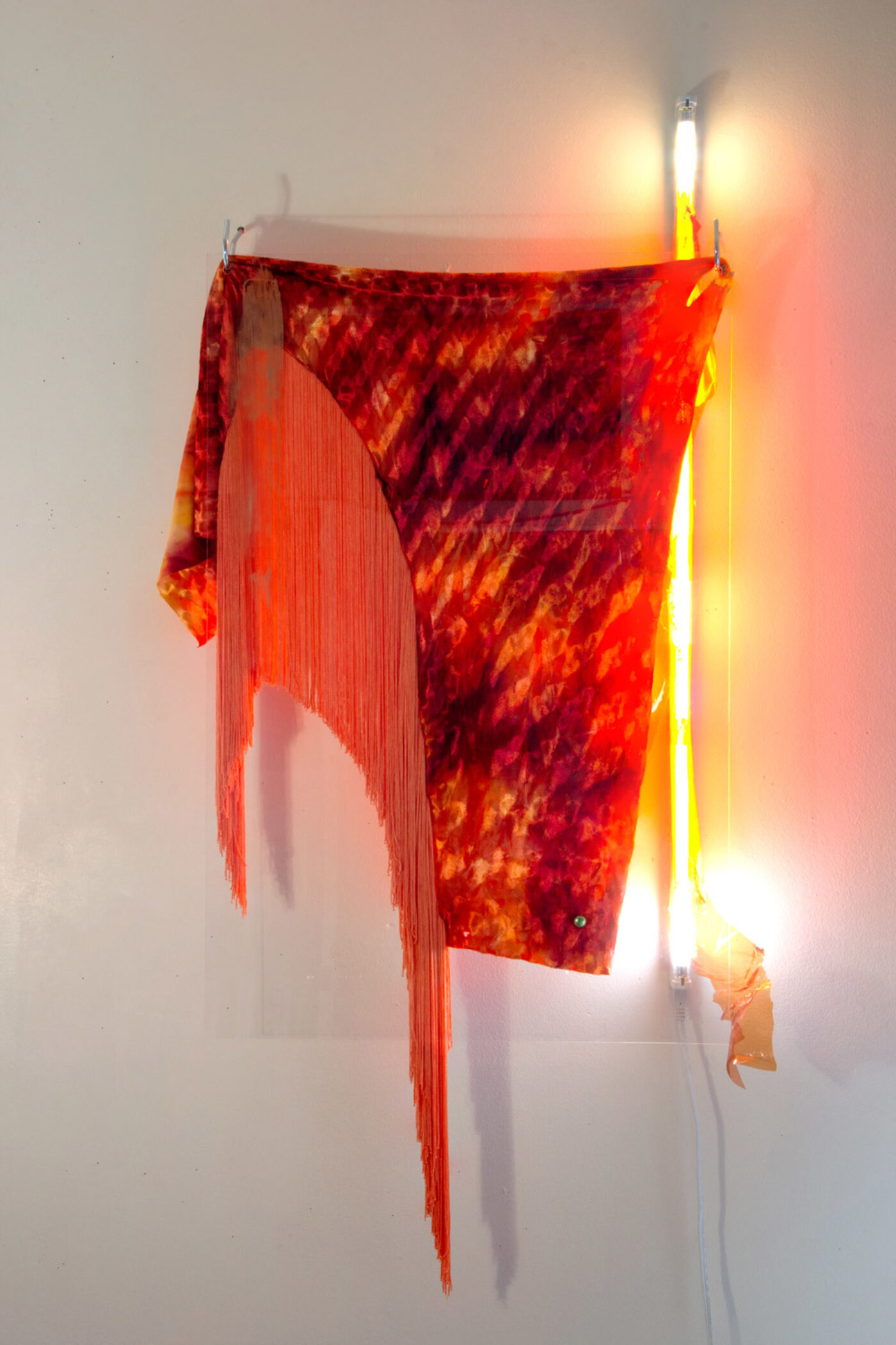 JO It feels like there’s a nostalgia in the music, some of the objects, and then The Promise feels like the contemporary material understanding of place. Dorito Flag has a similar expression of that. The construction of the drape as the gayest thing.

JO Flitty. Drape. For years I wouldn’t eat Doritos because everyone in my family ate Cool Ranch Doritos. It was totally classed in my mind, and I wouldn’t do it.

IP But it’s very sexy, Dorito Flag. It’s the most sexual object in the exhibition.

JO It really is your “sexy thing”

IP And it’s named after a Dorito.

Isaac Pool: 40 Volume is on view at the Knockdown Center in New York until February 25, with a closing performance on February 24.

A Familienaufstellung Performance by Chloe Piene 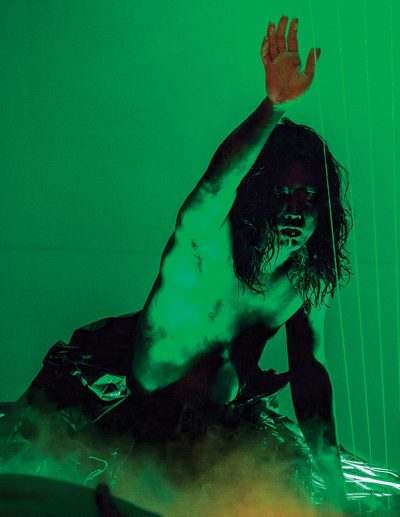 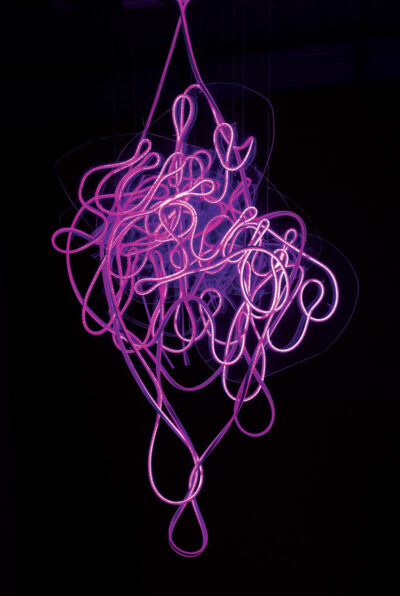 On stage and in the studio, Kwak (aka Xina Xurner) summons bodies, objects, and energies that flourish at the “seams of the illusions of fixed identity.” 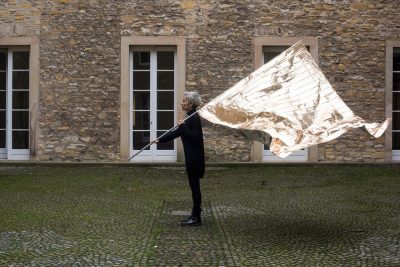 Performance as a poetry of long duration.