The Argentine writer’s final book of poems, Ova Completa, was recently released in English. This conversation between three poets took place thirty years ago, when the book first came out in Buenos Aires. 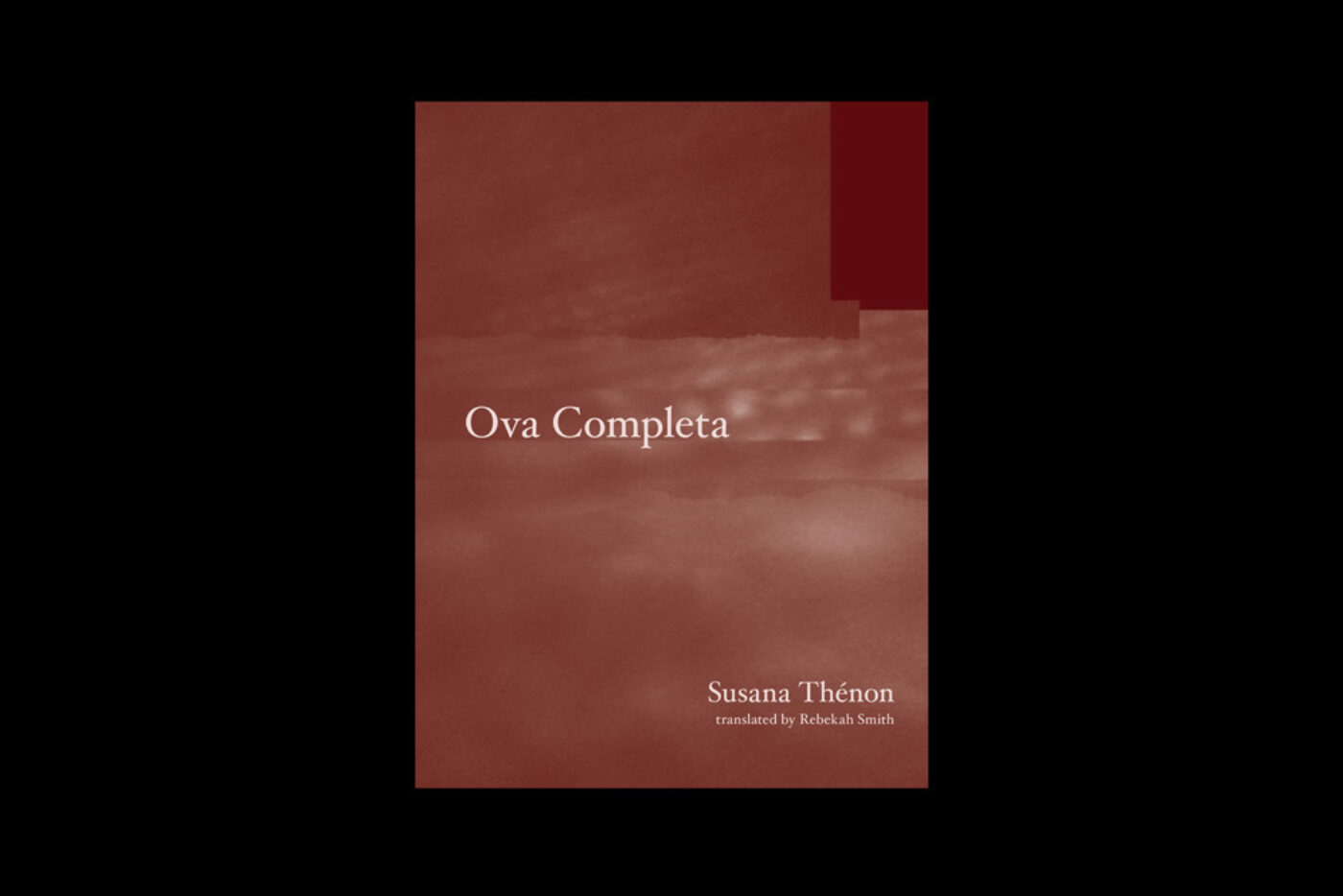 Poet and photographer Susana Thénon, author of five books (Edad sin tregua, Habitante de la nada, De lugares extraños, distancias, Ova completa), talked with Diario de Poesía in a noisy bar in Buenos Aires. Throughout our conversation, as on many of the pages of her most recent book, her reflections on poetics were mixed with all sorts of sounds and meanings, exclamations and nuances of urban music. With neither solemnity nor affectation, Thénon talked about her creative process, avoiding both sanctification and mystification—and therefore any trivial stereotype—of poetry.

Mirta Rosenberg and Diana Bellessi Do you feel like you take part in any specific group, tendency, or publication in the Argentine poetry scene?

Susana ThénonI had a little magazine with three other poets: Juan Carlos Martelli, Eduardo Romano, and Alejandro Vignatti—there couldn’t be four more different people in this universe. I remember we didn’t want to write “directed by,” so we [wrote that we] “coexist” instead. It lasted four issues. It was a very tough magazine, very pedantic, very harsh. But we tried to do a few things—that is to say, we tried to disseminate work and open up the landscape. It came out around 1967 and it was called Agua Viva. Of course, it wasn’t long before an editorial included some political commentary, then another, and another, and we all started to come apart due to disagreements, and it ended as all things always end.

STWell, the first one is a typical first book, one that I disavowed for a long time. But lately I’ve stopped disavowing it, first of all because that’s absurd, and also because every first book already has in it part of what’s to come, for better or worse, because the second book may be much worse than the first one. However, I find that Habitante de la nada is connected to my last book. It’s an extremely tough book, only that, unlike Ova completa, instead of doing, there I was saying.

The third one, De lugares extraños, is completely different: it could be considered within what may traditionally be called lyrical poetry. It’s a book that I love deeply and that I envy myself deeply for having written. Maybe one day I’ll be able to return to that place. My later poetry is even tougher. Although that book also has some irony in it, which I developed later.

After this third book there’s a break, a hiatus, a sort of precipice… Not a temporal one, because despite time passing between the publication of De lugares extraños (1967) and distancias (1984), my fourth book, I started writing distancias in 1968. The thing is that I couldn’t publish it until 1984. What happened was that I didn’t consider it finished, and besides, I started taking photographs around 1971. That crossover delayed the poetic process, but I knew that I would go on. That’s the most important book to me, because in it I show the distance that exists between one and the other, between one and oneself—not thematically but through syntax. That is to say, in distancias, there is something like a shift because I move into music: you don’t have to understand music, it has a different freedom. It’s not like language, which is used for many other things besides poetry. distancias is practically a score.

MR and DB A score of what kind of music?

ST Fundamentally contemporary music, like Luciano Berio’s, or to a certain extent Stockhausen, Charles Ives… The system of pauses in distancias, for instance, works as musical rests; the typographies imply voices, rhythms. Not to the detriment of what’s being said, though that comes first. There’s not a thorough understanding—I didn’t even have one myself as I was writing it—but rather a sensation. The book ends the way it begins, with the same poem. It was hard to finish it, to figure out how it ended. It wasn’t an easy solution, but rather, I realized it had to end like this.

MR and DBIn distancias you introduce a type of syntactic transgression that carries over into Ova completa, though with different intention… In distancias the melancholic lyric “I” is responsible, while in Ova completa irony plays a larger role.

STYes, in distancias there’s a different type of transgression: I don’t depart from so-called “high language,” I’ve been told.

MR and DB What would a “high language” be?

STIt would be “cultured language,” “average language.” Whereas something happened to me in Ova. Ova is not a funny book, as some people claim. At times I too died laughing while writing it, but without ever ignoring the terrible aspects concealed within.

MR and DBAs is often the case, a joke, if re-elaborated, appears as tragedy, and if elaborated again, reappears as a joke, but imbued with all the enrichment implicit in the process.

ST Yes, I have long chose to respect the other. If the reader has fun—carry on regardless!—and time to move on. What am I to tell off the reader? No, it’s too much already. In distancias I stopped giving orders… Not that I gave them before, but, of course, I did have some aspirations: that everything was thought about as I wanted it to be thought about. That’s over. Otherwise, it’s not fair, it’s a trick and I’m not playing, even if we’re talking about playing.

In Ova a range of things are mixed together, things I had left out. And let’s admit it frankly—I had left them out because of bias, even though that was subconscious. Suddenly I came to understand that there were a lot of issues and modalities that didn’t fit into my writing, and I started asking myself why they didn’t fit and feeling the need for them to fit. How? Not by writing like Enrique Santos Discépolo. Because he already did it wonderfully. Therefore: encompassing it all: college education, the years of Latin and Greek, the years of learning Hebrew, German, which I don’t disavow, but also all that is behind that…What about the woman who’s a tramp? And the ill-mannered, the anguished, the crazy woman? What’s going on with the crazy woman? Where is she? What about all the crazy people? And a crazy woman among crazy people?

That’s how this little book came up… When questions are not answered, most of all to very young people—and we are all someone very young at certain times—you end up with these questions. And then you have a pointless craziness, chaos: a kind of chaos that can smile, a chaos that can cry.

MR and DB However, Ova is a very rigorous book, it doesn’t seem chaotic at all, the use of devices can be connected with that of distancias…

STFrom that point of view, distancias is more chaotic. In Ova I try to put chaos under a certain pseudo-order, one that is neither order nor nothing: it’s a done-up chaos, shifted. Not purely experimental—I’d never publish an experimental poem, the experimental thing gives me the shivers. Even though I’ve written texts that are often laboratory products, I tear them up or keep them in the fridge, because I see them as simple raw material, preparations, trials, but they are not poems. 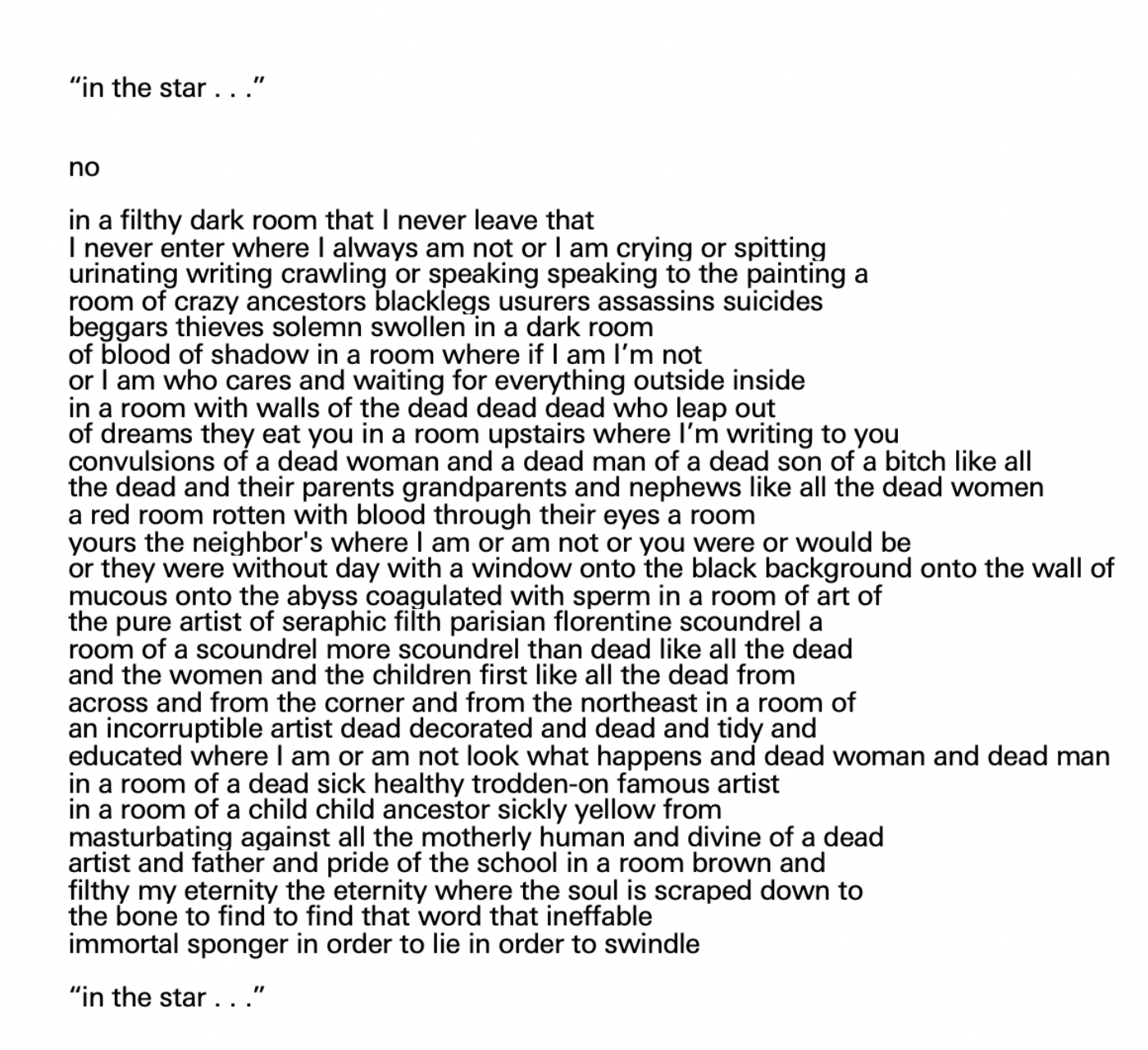 The poem “in the star…” by Susana Thénon from Ova Completa. Translated by Rebekah Smith.

MR and DBNevertheless, Ova has a drive that is much more comprehensive or integrated than distancias and it’s less hermetic.

STWell, someone told me something very funny: distancias is to be read in buskins, and Ova in flip-flops. I deeply needed the flip-flops. Although I have always written in different styles in parallel. Now, for instance, I’m also interested in reclaiming rhyme.

STWhy not? It stopped being used because of some unwritten law, by consensus. But when it’s needed, the good old rhyme is there. For instance, I really miss something that I have never written: a sonnet.

STAnd that it doesn’t distract you from what you are saying, because another terrible thing is that nobody pays attention to what they’re saying, by god! They are paying attention to discourse, to resource, to the double course and I, what’s more—when they write something about me, often… I don’t understand a thing.

MR and DBName some of your role models and influences.

STThey have always been more or less the same. I like Amelia Biagioni a lot. There’s a book of hers that’s a revolution. It’s called Las cacerías. Also, Rilke, Drummond de Andrade, many Brazilian and Italian poets. Gatto, for instance. And well, T. S. Eliot. And Emily Dickinson, Edith Sitwell. I was forgetting Oliverio Girondo: I feel very connected to him, not as an influence, because what he does he does with words, not with syntax. He doesn’t break syntax, he doesn’t touch it. There are two of his books that I find particularly interesting: En la masmédula, of course, but there’s another one, often overlooked, Persuasión de los días (Persuasion of the Days). And it’s been overlooked because it says things directly…

WaiterI cannot bring you glasses, madam, because there’s no water.

STI beg that you publish that because it’s true. There’s no water and there’s no air. Seventy jars and not a glass.

MR and DBWhat are your favorite things to read?

STI read novels. I’m following Heinrich Böll with great loyalty. Though now I’m not reading and writing much because I’m working very intensely on photography for a coming exhibit. I’ve been a great reader of crime novels. Suspense and mystery. But my readings are very heterogenous. For instance, I just read a book on symmetry. I don’t understand a thing, but I’m fascinated by how in the North Pole when you drain a bathtub, water goes away in one direction, and in the South Pole it goes the opposite way. This kind of thing gives me goose bumps, and from there suddenly poems come up, whether good or bad nonsense.

MR and DBSince you mentioned photography, it would be good to talk about the relationship that exists for you between the two languages, that of poetry and that of photography.

STI had a first exhibit meant to show Rilke’s poetry through photography. The intention, indeed, was not to illustrate the poems but to provide a version of them.

STYes, I had no choice if I wanted the poems to appear in a more universal Spanish, considering the absurd things I found in the existing translations. After all, you can also think of photography as a translation of poetry, and vice versa. They are opposing arts, however, because the passing of time in photography is almost non-existent; unlike poetry, which is closer to music, since both necessarily must happen over time.

MR and DBThat idea of kinship that you establish between poetry and music is also evident in the way you publicly read your own poems, impersonations, characters, multiple voices, rhythmic recreations, dramatic pauses…

STActually, I don’t consider that essential. It’s nothing more than my own version of how to read one of my poems. Although there are people who say that they get better access by my reading aloud, I think that it’s much better that what’s written reaches readers through the book, because that way they are freer. In any case, to me Ova completa means rescuing a certain histrionism, from a certain mimetism that characterized me since childhood.

The interview was translated from the Spanish by Silvina López Medin and Rebekah Smith.