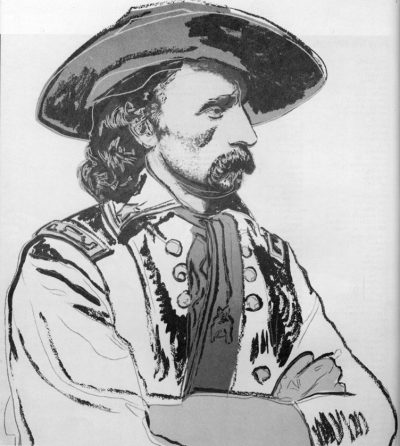 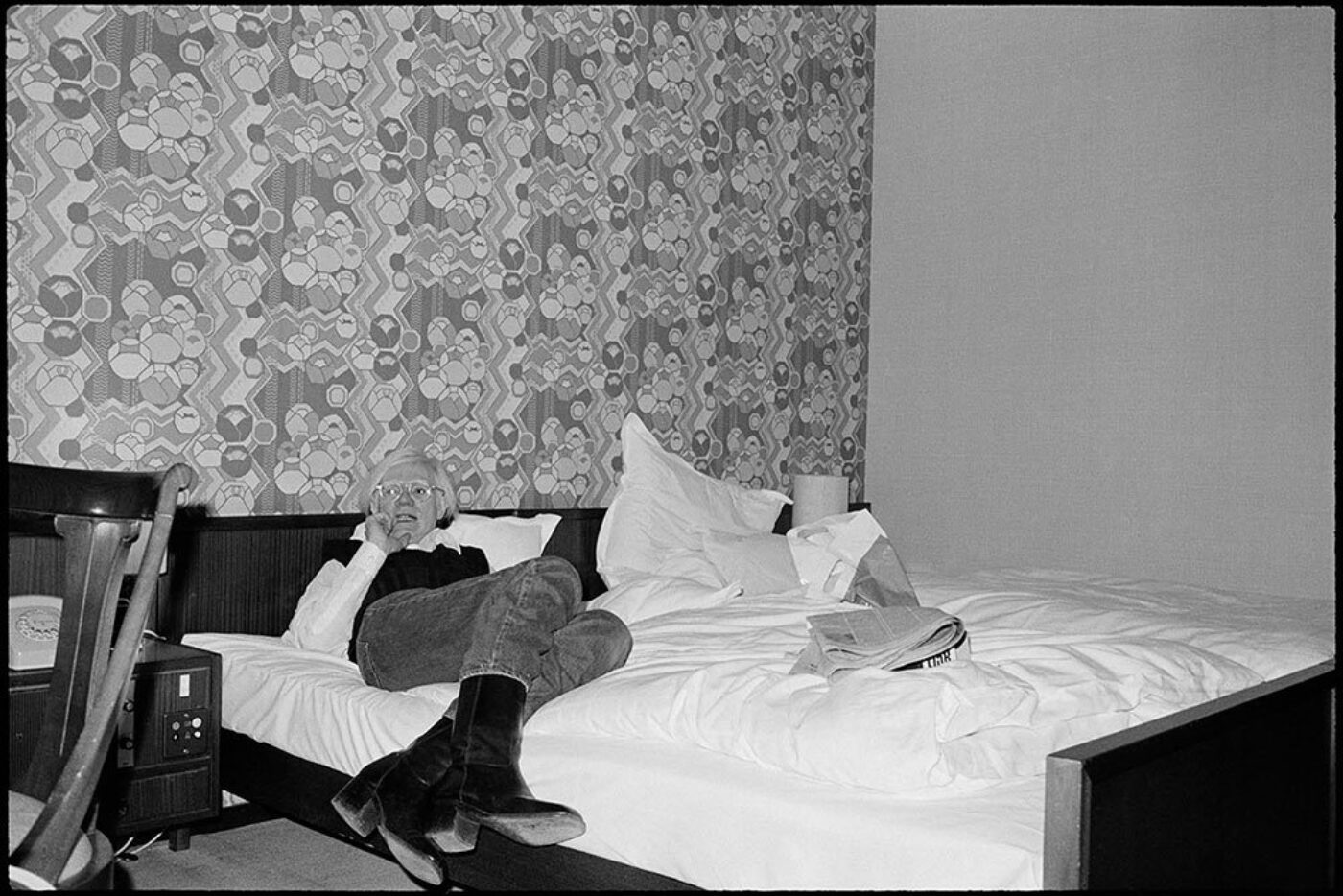 In November of 1969, still recovering from the near-fatal gunshot wounds inflicted by Valerie Solanas, Andy Warhol launched Interview magazine. Its initial mission as “A Monthly Film Journal,” however short-lived, would prove fortuitous for Bob Colacello, a young, Columbia University student who’d started writing for the Village Voice. Colacello’s ardent review of the Warhol-produced, Paul Morrissey-directed film, Trash (1970), caught the Pop Master’s attention, and within six months Colacello became Interview’s managing editor. From 1971–83, he was Warhol’s righthand man, helping steer the magazine through the hedonistic Me Decade when cocaine, disco, and flashy fashion reigned. By 1976, he’d begun “OUT,” a mock society column that coupled in-the-moment recaps with photos taken mostly on the sly.

The denizens of this glittery, jet-set world—some still famous, some now has-beens—rub elbows once again in Pictures From Another Time: Photographs by Bob Colacello, 1976–82 at Vito Schnabel Projects. It assembles over 150 black-and-white photos, many never shown before, the majority of which are arranged in a dense grid of small-scale prints. Shot in, and at, chateaus, hotels, limos, movie premieres, dance clubs, restaurants, weddings, and presidential inaugurations, both the scenery and the inhabitants depicted—New York socialites, Hollywood actors, politicos, rock stars, supermodels, and artists—evoke the era’s legendary party scene.

Seven large-scale photos make up the remainder of the show, amplifying Colacello’s intimate access to Warhol’s world and the life of a man perpetually on the go. In what may be the earliest photo, Andy at the Hotel Bristol, Bonn (1976), we see Warhol lounging fully dressed on a disheveled bed, his black leather boots carefully dangled over the mattress edge. Taken when Warhol was in Germany for a commissioned portrait of Willy Brandt, the then West German chancellor, it represents another fortuitous moment in Colacello’s career: It was during this trip that he and Warhol acquired Minox 35 EL spy cameras, which inspired Colacello to secretly photograph subjects for “OUT.”

While he would go on to become a longtime contributor to Vanity Fair, writing immersive and entertaining profiles on the rich and famous, Colacello’s tenure at Interview as Warhol’s trusted sidekick remains the highlight of his career. The photos in Pictures From Another Time, like his bestselling book Holy Terror: Andy Warhol Close Up (2014), bring us as near to the pomp and delirium as we’ll ever get.

Jane Ursula Harris By the time you bought the Minox camera in 1976, you’d begun your “OUT” column for Interview. What drew you to use a spy camera for this purpose?

Bob Colacello I’d never thought about taking photographs before getting the Minox. It was easy to use, and it fit into my inside jacket pocket, and I could slip it out and take a couple of shots without anyone even noticing. So I could catch people in candid moments at private parties, which was perfect for my column. 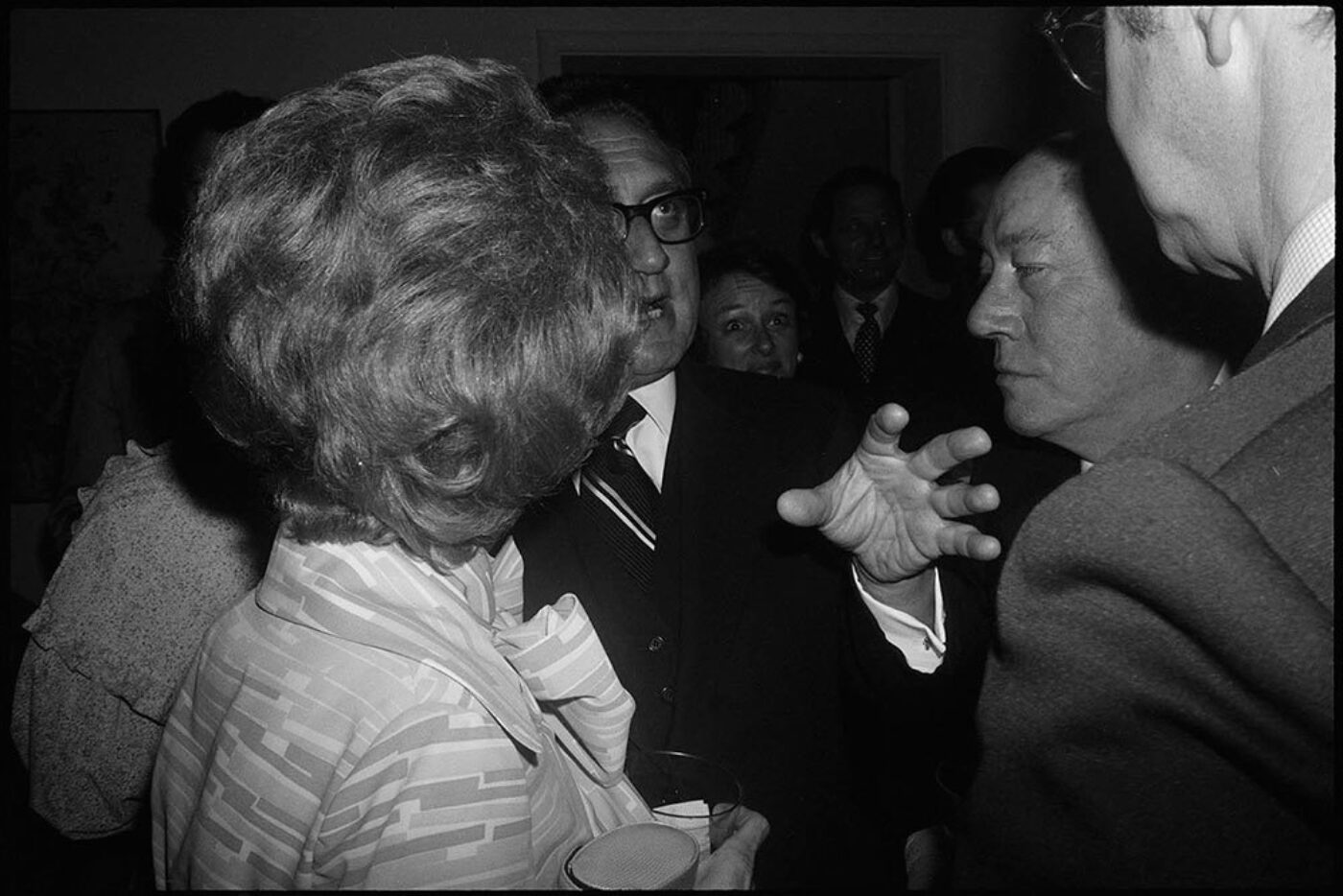 JUH What are some of your favorite pictures in the show?

BC I love the one of Henry Kissinger holding forth at a Washington, D.C., cocktail party in 1976, when he was still Secretary of State under President Ford. He didn’t notice me, or my camera, and the others were focused on what he had to say. (Although one gentleman seems to be nodding off.) I also like that half his face is obscured by a woman’s giant hairdo, so that what stands out most is Kissinger’s hand, which looks like it’s about to grab something. (Cambodia?) Another favorite is of Valentino hosting a dinner party at his chalet in Gstaad in 1980. He’s flanked by his two highest-ranking guests, the would-be King of Italy, Victor Emmanuel II, who was highly controversial and avoided photographers, and Baroness Marie-Helene de Rothschild, who is laughing out loud at something Valentino said, not the usual way she was photographed.

JUH How did you decide what photos to include in this exhibition?

BC Vito and I chose the photos that were the strongest visually, the most revealing, or both. Taken as a whole, they capture how wide-ranging and even bizarre my life was during the Interview years, bouncing from the White House to Studio 54, from Paris and London to Hollywood and the Amazon—and always, thanks to my job with Warhol, as an insider. For better or for worse, things continued that way during my time at Vanity Fair and beyond.

JUH Do you still use the Minox today or just the digital camera on your phone?

BC Neither. My involvement with photography was like a fling, fun and stimulating while it lasted, but something I’ve put behind me to remain faithful to my first love, writing. I was not into taking pictures as a kid growing up on Long Island; that was my father’s job. I was into maps and stamps. On the other hand I did not come to the Factory as a visual naïf. I was studying for an MFA in film at Columbia when Warhol and Paul Morrissey hired me. And even while enrolled at Georgetown’s School of Foreign Service before that, I took studio art classes at the Corcoran.

JUH There’s a number of really candid photos of Andy that capture him off-guard, whether laughing, in deep conversation, or looking forlorn in a cab—images that counter his carefully constructed persona of robotic indifference. Were you trying to capture that or was it just accidental?

BC I wasn’t trying, nor was it accidental. Instinctive might be the best way to put it. Andy was just being himself, and I knew a good picture when I saw it. And the fact is documenting everything we did was an integral part of daily life at the Factory, taken for granted, routine, normal. The boss, of course, set the pattern, with his constant tape-recording and photographing, for years with an unwieldy Polaroid before the little Minox came out. 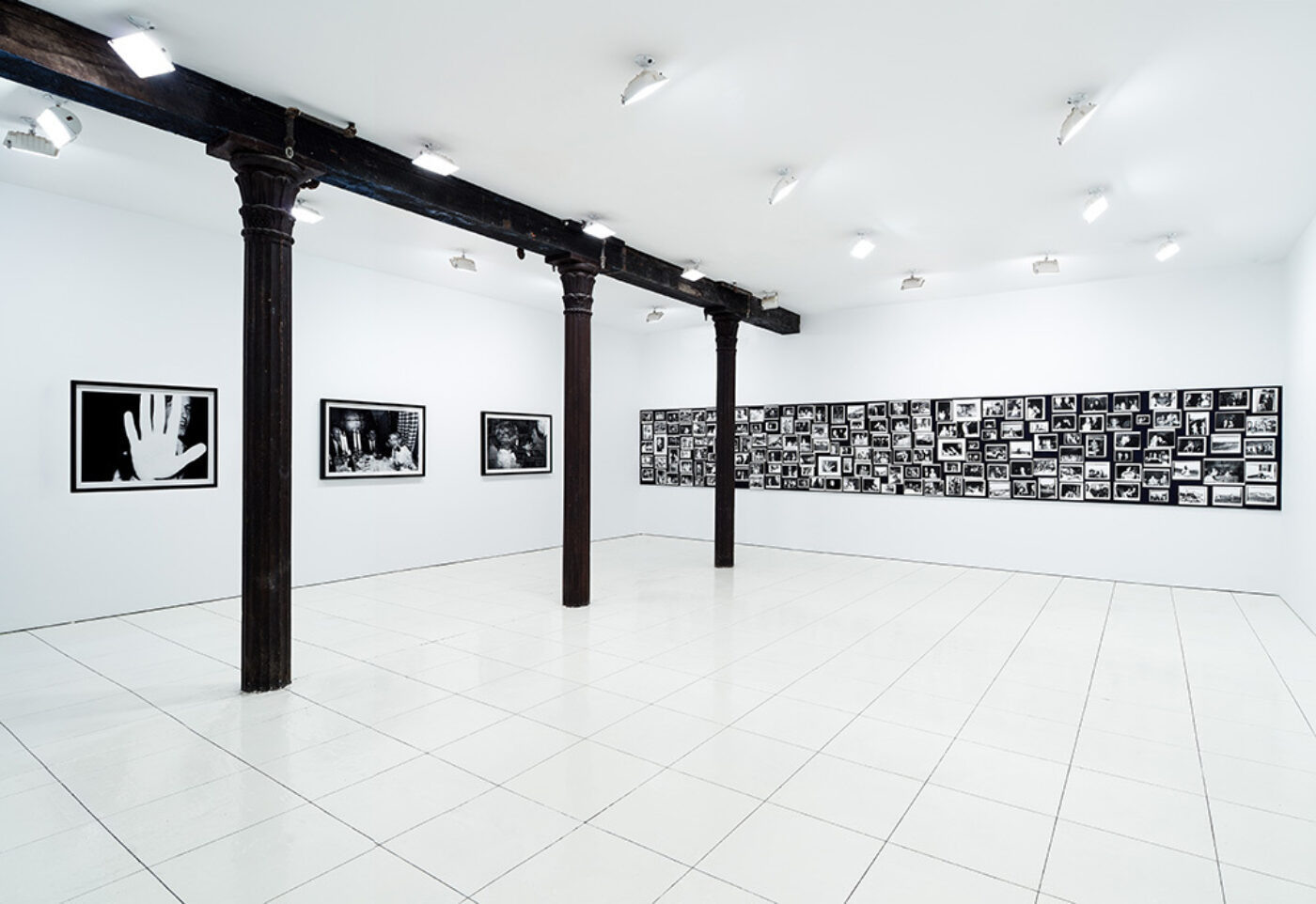 JUH Which pictures of Andy in the show do you think really capture a side of him few knew?

BC Andy was branding Andy long before that term became widely used. He was the Pope of Pop, the High Priest of Hip, the Soul of Cool. He planned it; he knew it; and he wanted to keep it that way. So when he was photographed at public events he invariably gave the same blank stare back at the camera, as emotion-free as a machine, which he famously said he wanted to be. That’s not the way he looked at me or my camera. He was open, relaxed, amused, attentive, whether he was listening to Joseph Beuys explaining an artwork at an exhibition in Dusseldorf or happy to be in on the joke as Betsy Bloomingdale chattered away to White House decorator Ted Graber at a private party during the Reagan Inauguration. Critics wrote that I humanized Andy in my book Holy Terror; I think my photos of him do the same.

JUH Do you think you would have made these photos public if he was still alive?

BC Yes. Don’t forget that Andy pioneered the idea, so prevalent today, that all publicity is good publicity. He was addicted to fame, but also knew it was kind of a joke. That ambiguity, and almost bitter sense of irony, was, in my opinion, at the core of his being and his work. He was never self-conscious in front of a camera. He posed for the paparazzi—he projected his image. He dropped the pose with me, with the kids, as he called his Factory employees in the ’70s and ’80s. Pat Hackett and Paige Powell took some wonderful pictures of the boss, as we called him.

JUH How much does the presence of politicians amid the glamorous mix reflect Warhol’s broadening circles versus your own interest in politics?

BC Andy was quite aware that he was documenting his times. He saw political leaders as “big stars,” super famous and powerful. And, yes, most of his political portraits were commissioned, including those of Jimmy Carter, Golda Meir, Willy Brandt, and the Shah and Shahbanou of Iran. But it’s also true that my interest in politics—I had gone to Georgetown School of Foreign Service—led me to broaden the Interview mix to include more and more political figures, whether that be Federal Reserve chairman Paul Volcker or Canada’s rebel First Lady Margaret Trudeau. And I was the one who encouraged Andy to accept invitations to embassy parties in New York and Washington, whether from the Italians, the Swedes, the Chinese, or Imelda Marcos. His usual comment at these soirees was, “We’re really up there now, Bob.” 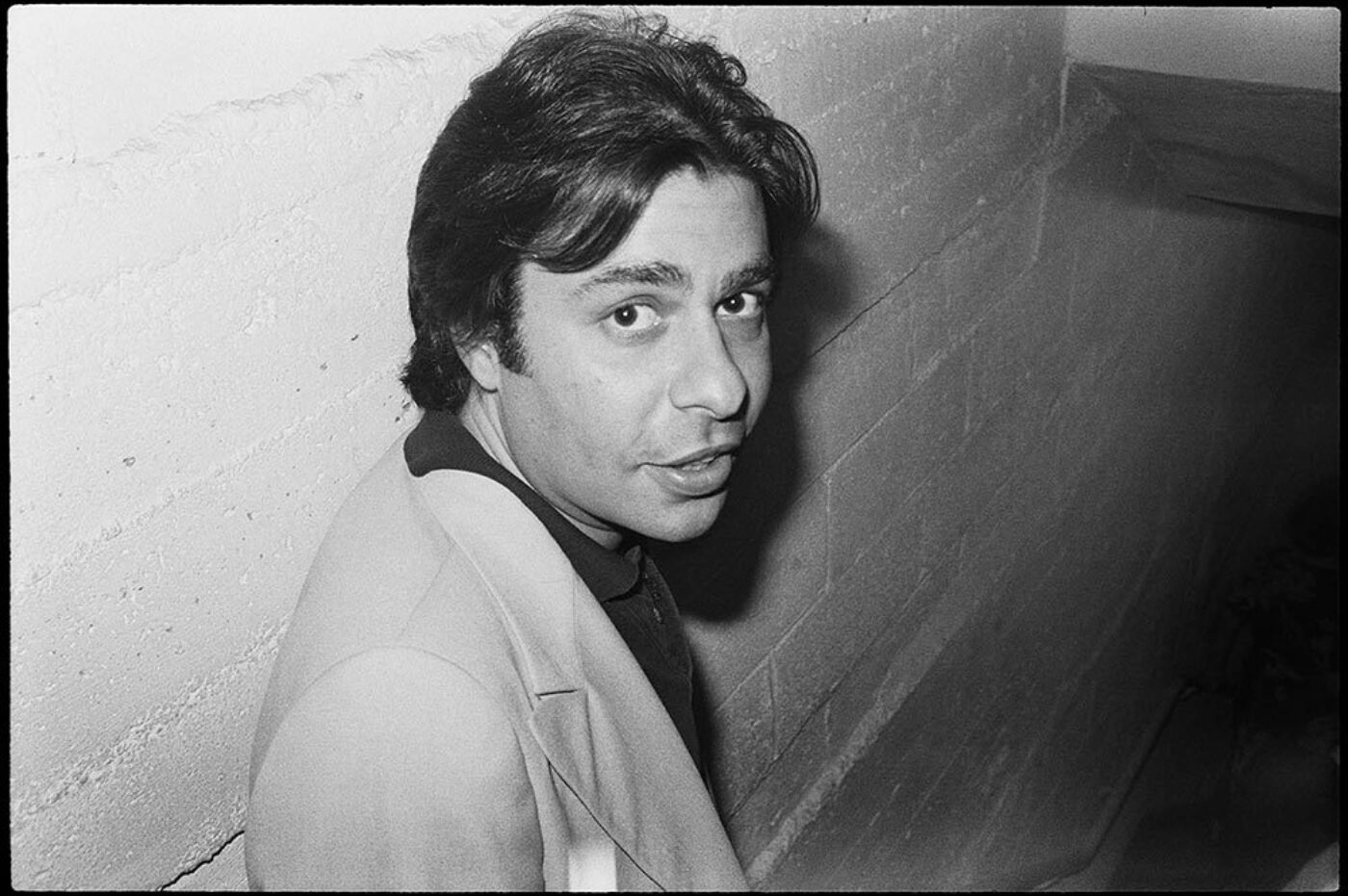 JUH So much of the New York scene you documented—clubs and restaurants like Elaine’s, Mortimer’s, Xenon, and Studio 54—is long gone. Do the photos make you nostalgic, or do you avoid that kind of yesterbating?

BC I love the word “yesterbating,” but I try not to indulge in nostalgia too much. The great old people I knew when I was young—Diana Vreeland, Truman Capote, Estee Lauder, Bill Buckley, Warhol himself—were more interested in the future than the past.

JUH I’ve always been a mega fan of Diane Vreeland’s. What was she like?

BC Original, creative, extravagant, fearless, funny, warm, caring, endearing, even a bit grandmotherly with us youngsters.

BC More egotistical, exhibitionistic, and tacky. See the Met Ball. Of course, Andy would have loved it.

JUH Ha! Do you avoid going out as much as a result, or are you just pickier?

Pictures From Another Time: Photographs by Bob Colacello, 1976–82 is on view at Vito Schnabel Projects until June 21.

Jane Ursula Harris is a writer who has contributed to Artforum, Art Journal, Art in America, Bookforum, The Believer, Cultural Politics, Huffington Post, The Paris Review, Time Out New York, Vice/GARAGE, and the Village Voice, among other publications and journals. Her essays are included in catalogues such as Participant Inc.’s NegroGothic: M. Lamar; Hatje Cantz’s Examples to Follow: Expeditions in Aesthetics and Sustainability; Phaidon’s Vitamin D: New Perspectives in Drawing; Universe-Rizzoli’s Curve: The Female Nude Now; and Twin Palms’s Anthony Goicolea. Harris is currently an art history faculty member at the School of Visual Arts.