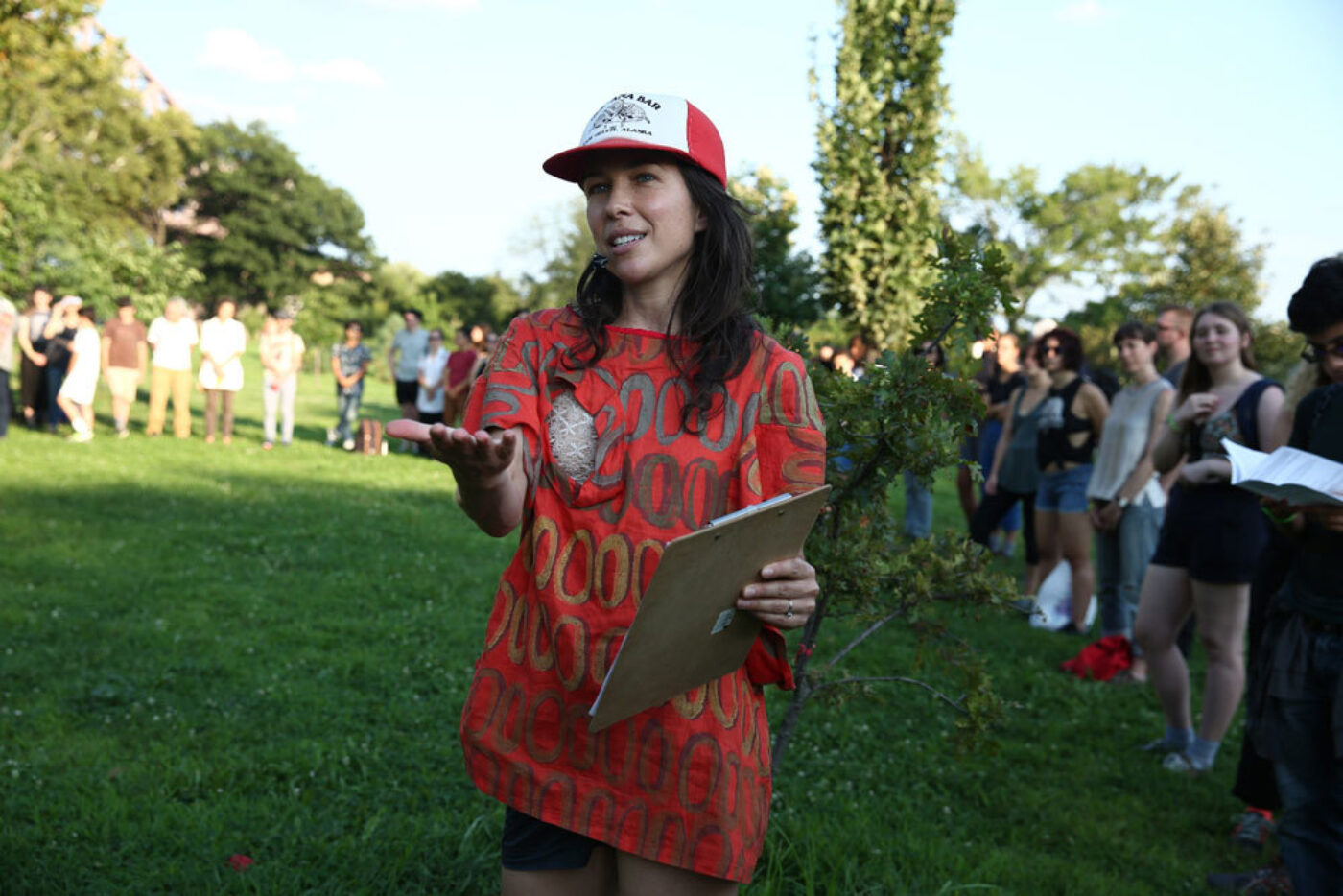 Originally from Alaska, Emily Johnson currently lives and works in New York City, though her forward-thinking productions have seen her travel both nationally and globally. An Indigenous artist of Yup’ik descent, Johnson has always been far-reaching in her work. While choreographic explorations are part of her multifaceted projects, she has been concerned with environmental and societal issues and deeply involved in audience engagement, enhancing her role as an artist with important aspects of community organizing and activism. Her extraordinary undertakings have been widely recognized, earning her a Bessie Award and a Guggenheim Fellowship, among others. I caught up with Johnson in New York, on the heels of her collaboration with Peter Sellars on Doctor Atomic at the Santa Fe Opera, and in preparation for the launch of her new initiative, First Nations Dialogues, which will unfold across multiple venues in New York City in early January 2019.

Ivan TalijancicAlthough your performance pieces have always incorporated community actions, as you expand your body of work, I feel like this aspect is gaining even greater prominence. How do you feel your work has evolved over time, and what are your thoughts in terms of where it may be headed in the future?

Emily Johnson I visited Beach 49 in Far Rockaways this morning where in 2015—as part of our Community Action for SHORE in Lenapehoking—we (audience, community, team) planted native trees and shrubs to help restore the dune that had been heavily damaged in Hurricane Sandy. The trees are big now; the dune is full of plants—the ones we planted and more. It looks healthy, and I can stand there, like I did today, and remember the kids and teens who were part of the Rockaway Waterfront Alliance, as well as the neighbors, and the dance people who came from the city. I can recall us hauling trees, shovels, water, and wheelbarrows and digging in sand. And I can recall the stories the teens wrote about their neighborhood and the song they surprised us with. Over time what I see is resonance—stories and relationships I and others have with this dune and other places of performance action. I see tree growth, roots growing to stabilize the coastline. To me, it reinforces the importance of gathering action and time; it is the resonance of time, story, memory, relationship, the growth of a tree. Gathering people together in time well spent—in listening, action, planning—seems the simplest thing and yet is the thing I cherish. As time passes, I feel confident that this is a big part of my job: gathering people, holding space, curating it just enough so that more time and space generates from within. We can decide to live in the world we want—we just need to get together, then decide what to do. I suppose every one of my gatherings is with that intent. 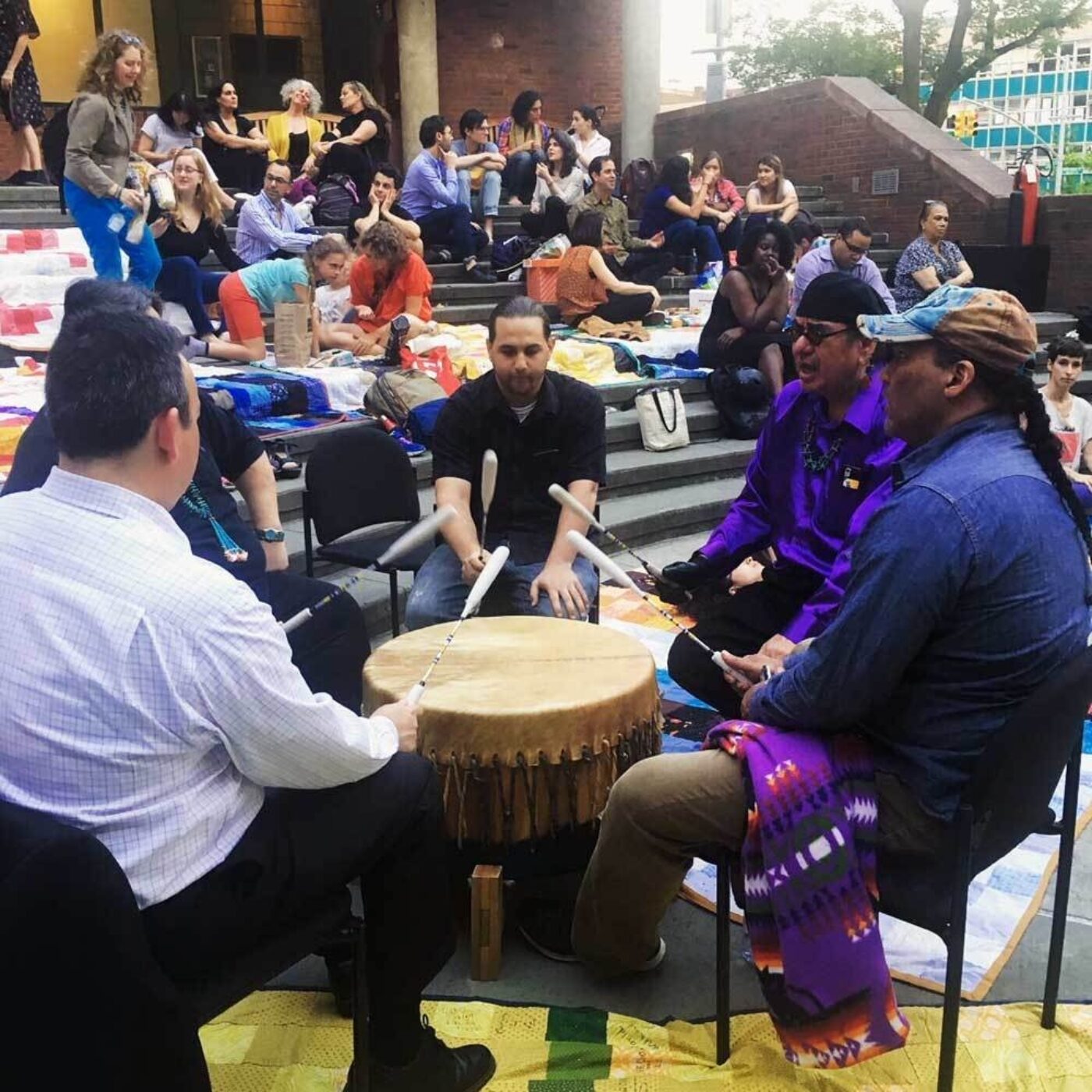 IT Speaking of gatherings: you are currently in the midst of an ongoing project here in New York City, intriguingly titled Kinstillatory Mappings in Light and Dark Matter. How did this phrase come about, and can you tell me a bit about the nature of this practice?

EJ Kinstillatory Mappings in Light and Dark Matter is a way to frame and hold ongoing work that I and my colleague and sister Karyn Recollet are doing in dance, writing, theory, processing. We are looking at futurities, kinships, consent, care, relation—how we as people relate and build kinship with one another and with animals, land, water, stars, constellation, fire, sky. How this is led by women. How this is led by Indigenous Knowledge. Kinstillatory Mappings in Light and Dark Matter is research and process as ceremony. It is dance. It is writing about dance. It is public gatherings around fires and food, as continued Long Table conversations, as essays, stories, and classes. It is light and it is dark because the world and the universe are made of both, and this is not a flip way to say we are trying to encompass everything, but we are. I like the word transmute. That there is a process, or many processes, by which you can transmute—light to dark, dark to light, unstable dune to stable dune. But to move toward greater relation, greater understanding, greater shifts toward good—whether that good is more heavily weighted at any certain time in the light or the dark—we have to acknowledge a process through pain, through the seemingly unchangeable. Building a fire each month on the Lower East Side is a simple thing. An extraordinary thing. Kids come who have never seen real fire. Families come to sit on quilts. The SilverCloud Singers most often come to drum. Sometimes there is food. Sometimes people bring enough to share. And it is shifting something about our local time/space. We are shifting into good because we gather. Because we gather with the simple intent to be together. 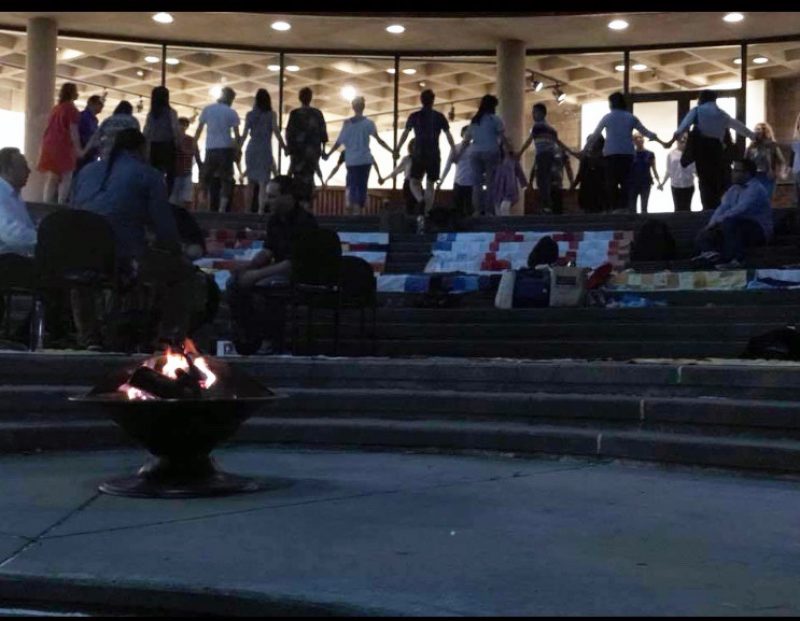 IT In addition to the work spearheaded by you, you also frequently collaborate with other artists. You just completed work on a new production of John Adams’s Doctor Atomic at the Santa Fe Opera with Peter Sellars. What was that experience like for you?

EJ Doctor Atomic is the story of the twenty-four hours leading up to the detonation of the first nuclear bomb. The bomb was built in Los Alamos and tested at the Trinity site in Alamogordo—all in what we call New Mexico. The Santa Fe Opera, where this production was presented and where we developed it, is on Tesuque land. You can see Los Alamos from beyond the stage. This is a New Mexico story that is absolutely embedded within the land and within the bodies—both living and no longer living. The story, the opera, had to be from New Mexico now. This opera had to speak to the present and hopeful future, as well as to the past. It was a true honor and my deep joy and privilege to work with leaders, drummers, and singers of Tesuque, Santa Clara, and San Ildefonso Pueblos and a community of women from the Tularosa Basin Downwinders. It started with relationship, with getting together over tea, a drive, a burger. We listened to one another. Peter and I heard stories of repeated cancers and many deaths; we heard stories from the land of these three Pueblos; we heard about family members who used to work at the labs; we heard about the effects of nuclear waste and testing on deer, fish, soil. The talking and listening turned into larger community gatherings that included others who used to work at the labs, which turned very naturally into healing circles that turned into knowing we wanted to share the stage and this time in whichever way we all determined was best because these stories, these bodies, these people are living with the nuclear industry and have been since before it began.

With Tesuque, Santa Clara, and San Ildefonso Pueblos a very specific protocol was engaged and permissions were given so they could dance together and on stage and share a new Corn Dance—which is a blessing and a call for rain. This dance is danced on stage before the opera begins. It is a remarkable and generative moment—just for the fact that it is shared. It is healing, and it is for everyone who comes to sit in that house. And it is for our ancestors, and it is for the future. They dance again in the midst of the opera. The dancers enter stage from the direction of their Pueblo. They come together and dance as the singers who play J. Robert Oppenheimer and his wife Kitty, General Groves, and the Oppenheimers’ housekeeper, Pascualita, sing through their tribulations, anger, grief. When the dancers exit stage, they exit together. There is power in this choice. In rehearsal we talked about these dances being here long before anyone decided to make a nuclear bomb on this land. When we first gathered for rehearsal, we stood in a circle on our practice stage and talked about what brought the Downwinders together—cancer, deaths, pain. We talked about walking onto stage with the intent of being seen. And so they walk onto stage together and stand in a present and intentional way. The New Mexico Downwinders have, until now, very much not been seen. They are the only Downwinders who do not receive recognition or remuneration for the costs of their care, or simply for the travel to get to their care from rural New Mexico to a hospital. Their gestures on stage are from pain, to protection, to sharing. It is a highly emotional and potent thing to condense time like this. The real General Groves did not meet the people his decision made downwinders. But these women stand now with Daniel Okulitch, who speaks Groves’s words, and they stand through the pain of those words: not to endure more pain, but to break through it, to transmute and share with us that it truly is possible to face a moment you never thought you could—and in so doing to make enough of an impact that a different decision could be made now. I think these women do one of the most courageous things by stepping onto stage. 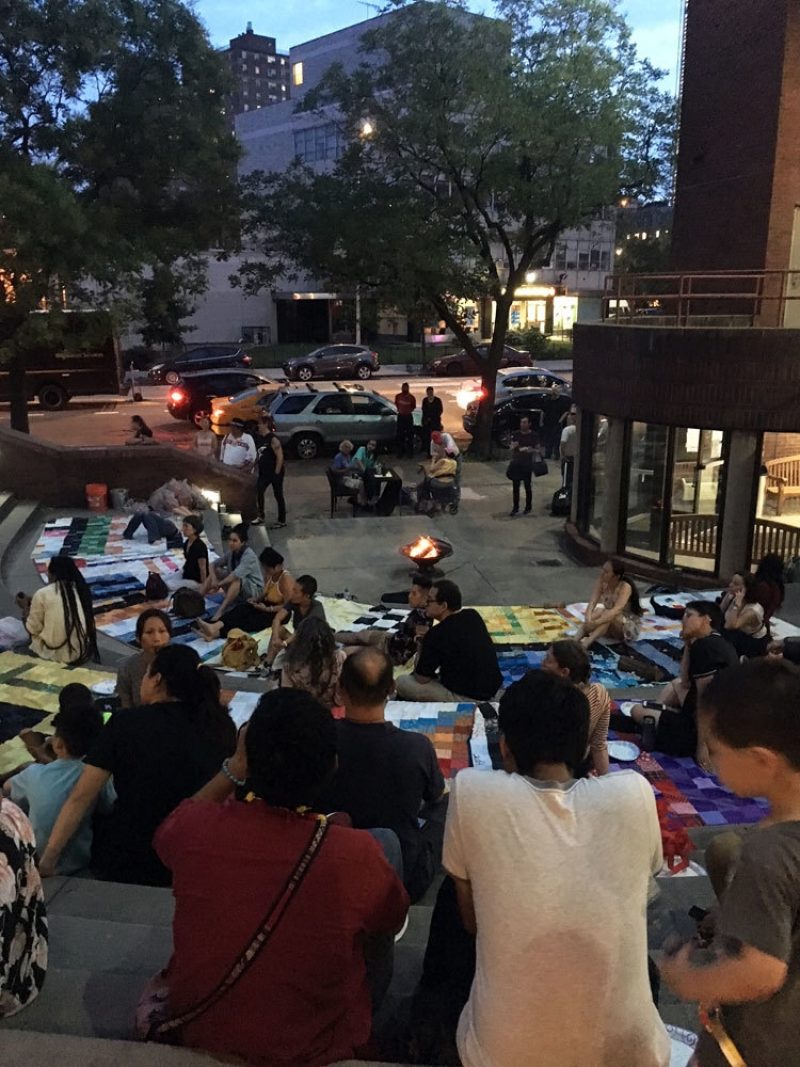 IT What are the other projects you are working on in the near future—in addition to the fireside gatherings we discussed earlier?

EJ This fall, I am guest curating a series at Playwrights Horizons and in January at Performance Space New York. We are preparing to tour Then a Cunning Voice and A Night We Spend Gazing at Stars to Chicago, and—with a consortium here in the US, Australia, and Canada—creating a Global First Nations Performance Network, part of which is The First Nations Dialogues in New York in January—which includes a public welcome and honoring celebration, performances, dialogues, gatherings, a fire, and closed protocol ceremony—with partner organizations and festivals through the city.