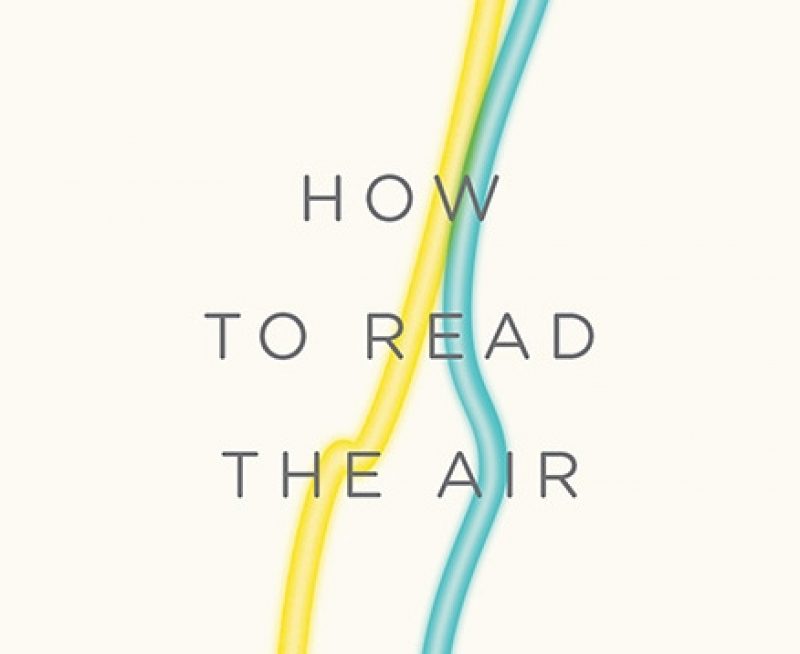 There will always be a contingent of critics who cannot resist the impulse to explain a book according to the observable qualities of the person who wrote it. To them I say this: Dinaw Mengestu writes stories. Just stories. What’s more, his books—first The Beautiful Things That Heaven Bears and now How to Read the Air—examine prototypical American desires like success, visibility, and reinvention.

Happily, I’m not the only one in his corner: Dinaw is among the band of writers (20 under 40, to be exact) anointed by The New Yorker in this summer’s fiction issue. Last week, we spoke about myths, latte bowls, and the Establishment’s habit of tearing our writers asunder.

Emily Testa The structure of this book, with its alternating storylines, is unusual. Do you see that structural choice as important to the story?

Dinaw Mengestu Before I knew what the form of the novel was going to be, I knew there was a character who was deeply invested in recreating his parents’ history. Really quickly I realized the whole tension of the book was a dialogue between past and present, between a generation that had traveled from Ethiopia and a generation that had been born in America and felt completely American. The easiest way of manifesting that tension was to split the narrative along that inevitable divide, that generational and immigrant divide. And the two marriages [Jonas’, and his parents’] echoed each other very naturally as well. Back and forth and around and around, the same tensions emerge. 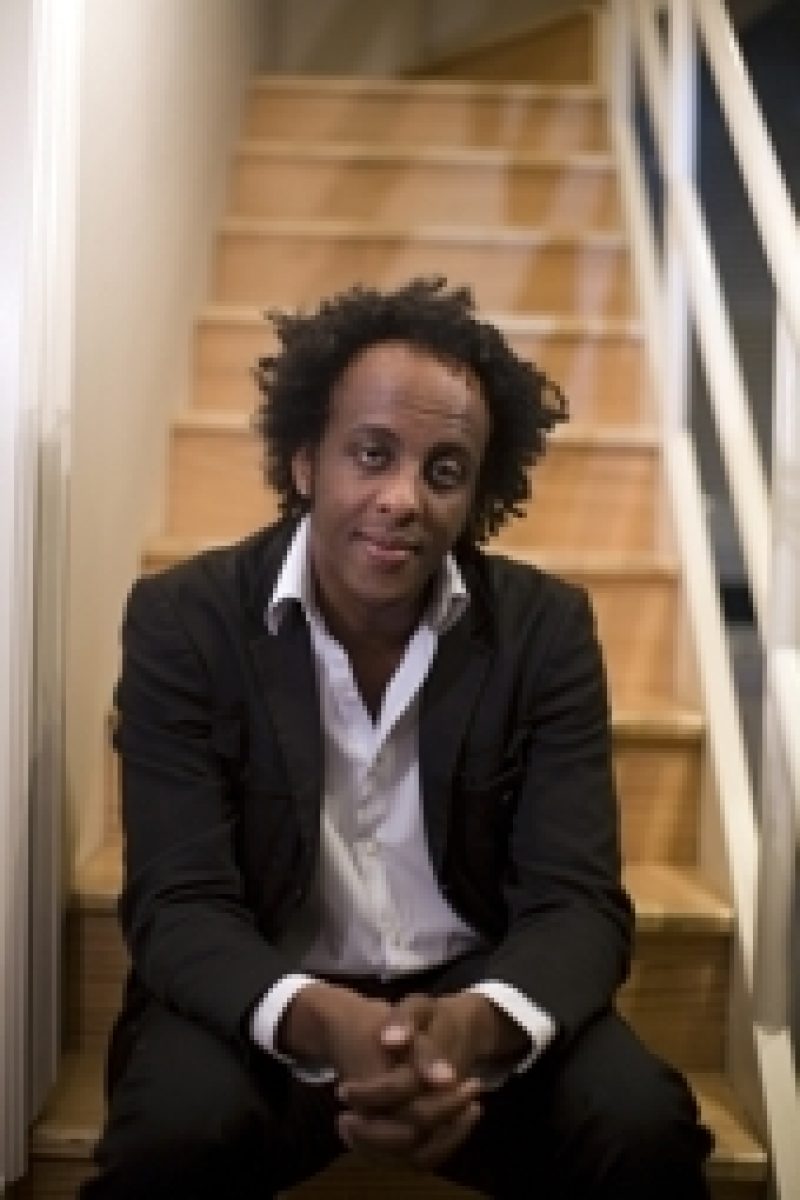 ET It’s a very tense book. And the tightest level of that tension has to be Jonas. In the end, what you made is a fractured book about a deeply fractured man.

DM He’s every bit as bifurcated as the story itself. For Jonas, the past is always seeping into the present, in abrupt and often violent ways. I think that’s reflective of the fact that often when our histories intercede on our present moments, they happen to so forcefully, and in some situations that is aggressive.

ET And the effect is heightened by a contrast between the central myth and the way you write it. You keep a tight rein on what might otherwise be too faraway or allegorical or something, just because you write so plainly. That’s a compliment, by the way. There’s nothing better than a plain writer.

DM I do gravitate toward writing about violence, but I always want to resist melodrama. When you have multiple kinds of violence—physical, emotional—and you control the tone of everything surrounding it, the effect unfolds more naturally. It’s silly to beat the reader about the head with it, you know?

ET You’ve written so much about the myth of Africa in the West—Americans, in particular, being eager to believe a parceled-up version of African history, however gruesome and unfair that version may be. Do you see your books and articles as a kind of challenge to that kind of self-deceit?

DM Much more self-consciously with the second book, yes. And elsewhere I do think I stage a deliberate attempt to retell stories that have been reported frequently in places like Sudan or Congo, places that don’t lack for coverage, but they do lack for responsible coverage. Most journalists who write about Africa do so only in terms of bad things happening, and there’s never any attention or significance placed on the political circumstances that cause the violence that determines the lives of the people they’re writing about. There’s a huge fallacy behind that kind of writing, because it allows readers to feel sympathy, or empathy, without ever actually having to know why. With this novel, there’s definitely a degree of cynicism about the packaging of the immigrant narrative, the African narrative, and the trajectories and frameworks we have all come to rely on.

ET And then you go one further by situating the present story in your book in a land of immigrant narratives, a legal aid office where those familiar stories are batted about without the full consequence they deserve. But to be fair, aren’t Americans—or maybe just people—eager to believe a parceled-up version of anything? Isn’t describing yourself in those terms standard practice at this point? We’re so accustomed to hearing qualifiers like “Well, I’m from a big Italian family” or “Well, I’m just a New York Jew.” We offer up a story on our own behalf. It explains us, so we don’t have to explain ourselves.

DM Right. The unscripted truth requires so much more effort on the part of the storyteller, and certainly more on the part of the audience as well. They’d actually have to listen rather than latching on to what they already recognize or know.

ET But it happens in other ways, too. Think about people who write books or make paintings or do other kinds of art. That life is about long, lonely days of work, but we romanticize it. We want to know how the artist made his art, but more often than not we just file away the information and never revisit it until we need to make a point. It’s like just hearing about the genesis of something—in 35 seconds or less, of course—satisfies us. There’s a hunger or urgency for information about how something or someone came into being, and then we know it, and then we’re done.

DM Well, we want just enough to form some attachment, but never so much that we exceed a certain threshold. Because then it gets complicated, and we’re burdened by the information instead of delighted by it.

ET You moved to Paris and wrote How to Read the Air there. How about the myth of the American in Paris? You know…birds chirping, Juliet balconies, latte bowls. Does your being a writer look and feel the same no matter where you are?

DM I came to Paris to free my head of New York and spend a little quiet time by myself. I didn’t speak much French at all, but it worked out quite well. I was pretty drained by the experience of writing and promoting my first novel, and I was happy not being able to give much of myself to anybody else, not more than a few measly words, anyway. I could order coffee, but that’s basically it. In the end, it wasn’t about Paris, though its aesthetic beauty is an obvious attraction, and I loved being able to walk everywhere. It was just nice to feel more anonymous than I had in a long while. The other really nice thing was that I found myself more able than ever to write about New York, because I was away from it. I could create the city as I imagined it, or as I needed it to be for the novel, not as it actually existed for me when I lived there. Not that it’s ever only one thing.

ET You brought up an interesting point about the public side of being a writer. It’s nice to be recognized, for people to know that you write and to think that you’re good at it. That recognition, though, is so divorced from the process of writing, and the struggle of writing, and even the reward of writing, which tends to be private in the end. That said, I would be remiss if I neglected to mention the fact that you were just named among The New Yorker’s “20 Under 40.” Even after you decamped to Paris in search of peace and quiet, the buzz found you.

DM Well, first, about the public-private thing, by the time you sit down to write, that tension has gone away. The problem with publicness is just that it makes it harder to get to the table. And we’re so skeptical—or, I should say, I’m so skeptical—of the way we see books promoted, especially once we see how the beast functions. On the other hand, though, with attention comes a measure of influence, which is incredibly important for a person like me. My books get a nice amount of attention, but they’re not scurrying up anybody’s bestseller lists. So The New Yorker might rescue books like mine from being divided into smaller and smaller ethnic and cultural categories of immigrant literature, or African literature. I hope recognition like this makes the point that those categories might not have everything to do with where or why you write.

ET I think you’re right. And when work is specified in that way, it reminds me of PhD students in humanities, jockeying to carve out a tiny stake of ideological land and flag it as their own. Though I suppose it’s even worse in this case, because the writer isn’t asking for the label affixed to his head.

DM With this novel, I feel like I couldn’t have been any more invested in America if I tried. But unfortunately, I can’t escape the fact of what’s perceived, which is the immigrant identity of the writer, and not the characters or the story in the book. It doesn’t matter if I say I was raised in Illinois, or if I set my book there. People read my identity and the identity of my characters and somehow conflate them in a way that allows them to say, this is another immigrant novel. How many times are we going to keep doing this? Here’s another Jamaican American novel. There’s another Korean American novel.

ET I read that you publicly contested a reporter’s description of your childhood, which placed it in Ethiopia instead of in Illinois.

DM That kind of inaccuracy is dangerous. And it changes things. For instance, in the second novel, I wrote about Peoria not because it was important to me (though I did live there for a short time) but because I was interested in writing about the Midwest as a composite of America, and writing about it through the eyes of people who were completely Other.

ET I’m glad you called this book an American novel. Your characters seem to always bringing their stories to bear, which is the quintessential American thing. And so the book becomes rings and rings of people, all of them immigrants in their own way, using their stories and explanations to reinvent themselves someplace else. If America is anything, it’s got to be that.

DM Well, thank you. I’m glad I have one proponent.

ET Last question: how do you negotiate writing big books and big articles? Do you keep a wall up between the two, or do they help each other along?

DM Often my nonfiction assignments become ingrained in my head or body, and years later I find them working their way into my fiction. With my second novel, as I was imagining Jonas’s father’s exile from Sudan, I found myself recalling the landscape I had last seen when I visited Sudan in 2006. The great thing about fiction, though, is that you can elaborate and invent. The truth is much more difficult to negotiate around.

How to Read the Air is available from Riverhead.