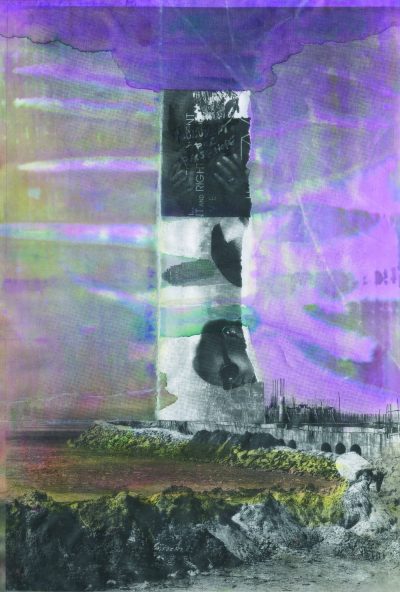 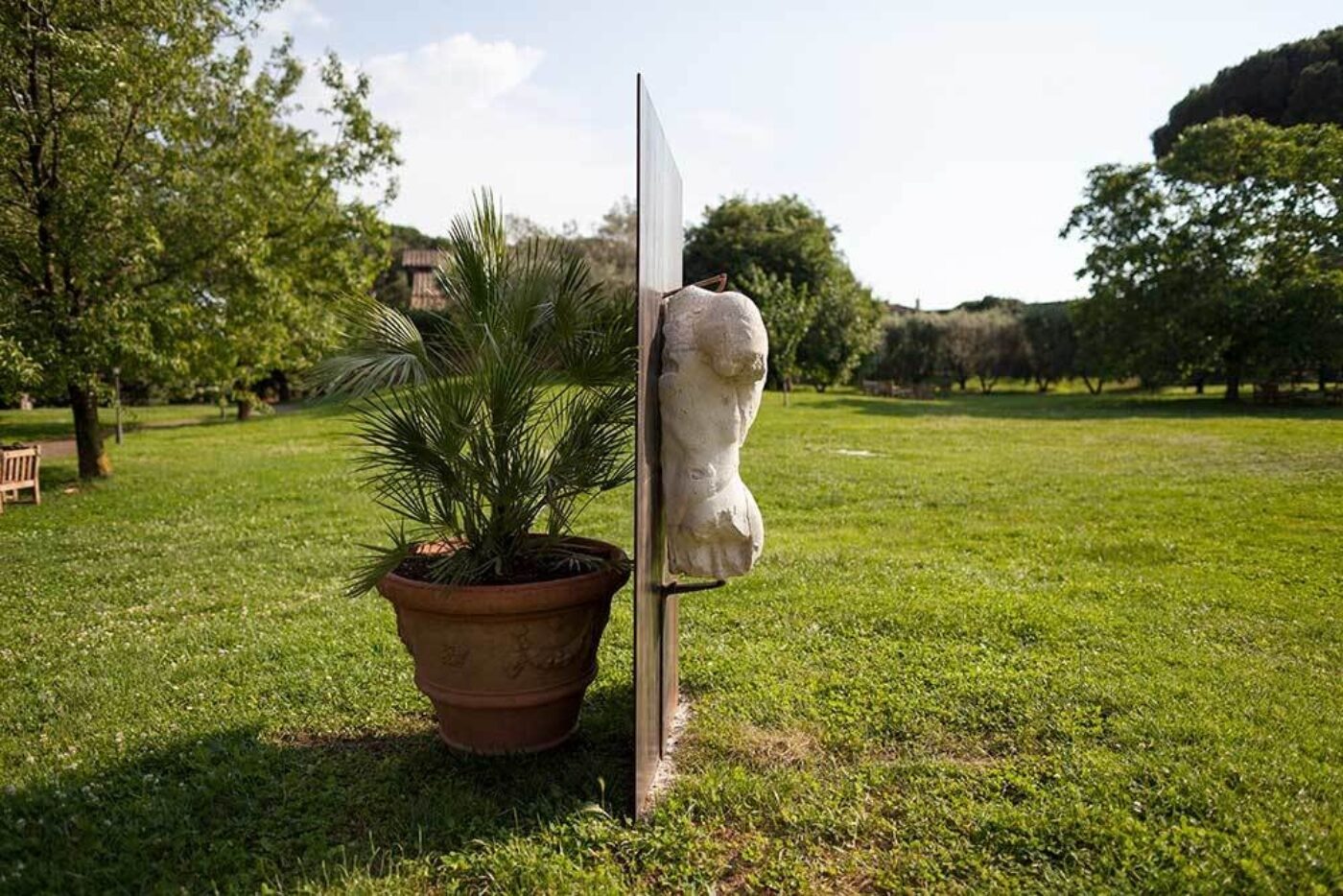 The Shed in New York City commissioned a new work by Onyedika Chuke for its exhibition Open Call. Begun in 2011, Chuke’s largest body of work to date is titled The Forever Museum Archive, a self-initiated conceptual platform through which Chuke analyzes social, cultural, and political structures. Interviewed in two sessions by Rehan Ansari, George Bolster, and Sara Reisman from the Shelley & Donald Rubin Foundation, first at the end of 2018 and again in late May, Chuke reflects on his recent artist residency at Rikers Island. There he was a New York City Public Artist in Residence, which entailed collaborating with individuals at Rikers Island to alleviate the negative impact of criminal punishment, to create access to art, and to open dialogue between New York City policymakers and those in their custody.

Rehan Ansari As a socially engaged artist working with sculpture, how would you describe the trajectory of your practice?

Onyedika Chuke A lot of my work deals with questions of how we talk about the human body, history, and spiritualism. I consider these issues through sculpture and figure out how the sculpture becomes an index for history. That is also the idea behind The Forever Museum Archive. There’s a piece that I made in 2012–13 called Dome and Double Nymph_An Architectural Template for our Spiritual Worship which I conceived of while I was traveling through Europe and parts of Africa, thinking about creating a template for worship. I came up with this structure based on my observations of Christianity, Islam, and my own Buddhism. This work is my idea for finding a consensus.

There is also a sculpture I made in 2015 while in Rome which I molded from an object from the fourth century BCE—a stone torso that was not conserved and was falling apart. I figured that the mold would cancel out all the different colors so that I could just look at the form, look at the content, look at the gashes, and then start to make an idea of a real body. I love drawing connections between different histories. In a piece called The Untitled: 1919, I analyze the connection between three events of that year: Benito Mussolini’s publication of the “Fascist Manifesto,” Sigmund Freud’s “The Uncanny,” and the birth of Mikhail Kalashnikov (the inventor of the AK-47).

I sometimes do not consider myself an object maker, but when I am at these sites I am. This must be because I always reassess space. Reassessing a space comes from the fact that I was not born in the United States, and I travel a lot, so I am used to both asserting myself on a space but also allowing the elements of a space to have an impact on me. I soak it in and allow the world to happen to me. I had to do a lot of that as a kid. I didn’t go to an arts high school. I didn’t have a lot of things that people might’ve had before going to Cooper Union. That was my first time dealing with an arts environment, so I had to approach it through sensibilities that I wasn’t accustomed to. I had to be extra sensitive. Sensitivity is a huge part of my practice, using everything that’s available to me. 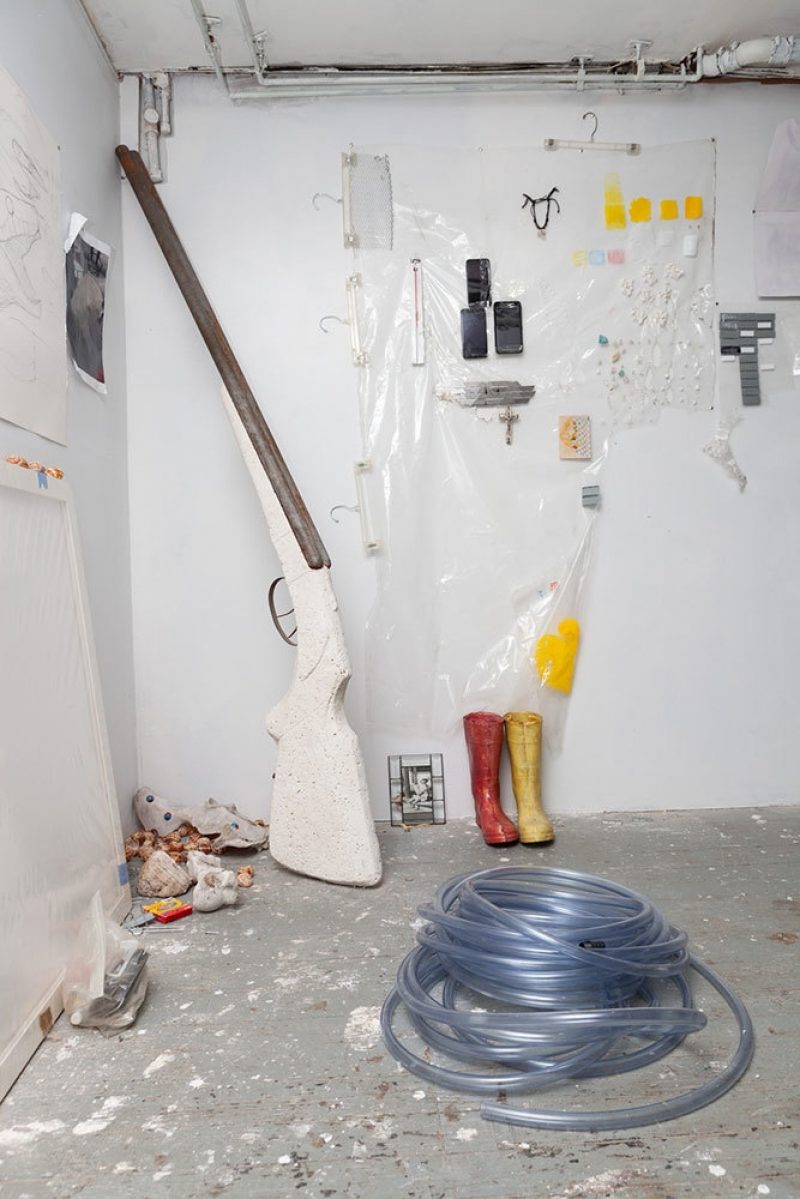 RA Can you say more about what a site is to you?

OC Creating a site museum is creating a format for viewing the site. I think that’s what pedagogy actually means in terms of how we reframe and how we find formats. My format is one of stream of consciousness in which the narrators can switch, skipping from time period to time period. It is like the fiction of William Faulkner.

RA How does “allowing the world to happen to you” work in terms of creating art?

OC In December 2011, right before I traveled to Libya, the woman who raised me in New York passed away, and I was trying to get to her in the hospital to say goodbye, and there was a blizzard. I got frostbite, and on my way there I couldn’t feel my hand. This is important because the whole time I was trying to figure out what the relationship is between a static object and something that has blood pumping through.

RA Why Libya? And what is The Forever Museum?

OC In Libya you can see second-century resistance to Roman rule. There is also a judiciary system from Roman times. There is Fascist architecture and a museum commissioned by Mussolini, a castle from the Ottoman Empire, and there was Muammar Gaddafi (he was still in office). You see the circuit between Europe, America, and Africa. That Mussolini-commissioned museum was next to an excavation that was still incomplete. That’s my inspiration for The Forever Museum. All my work is an archive that is never complete. By the time I came back to New York City, riots had started in Libya, and what the news was reporting here was not what I saw there. It was fake news. That’s what had me thinking of creating and positioning narratives for the art in my Forever Museum. 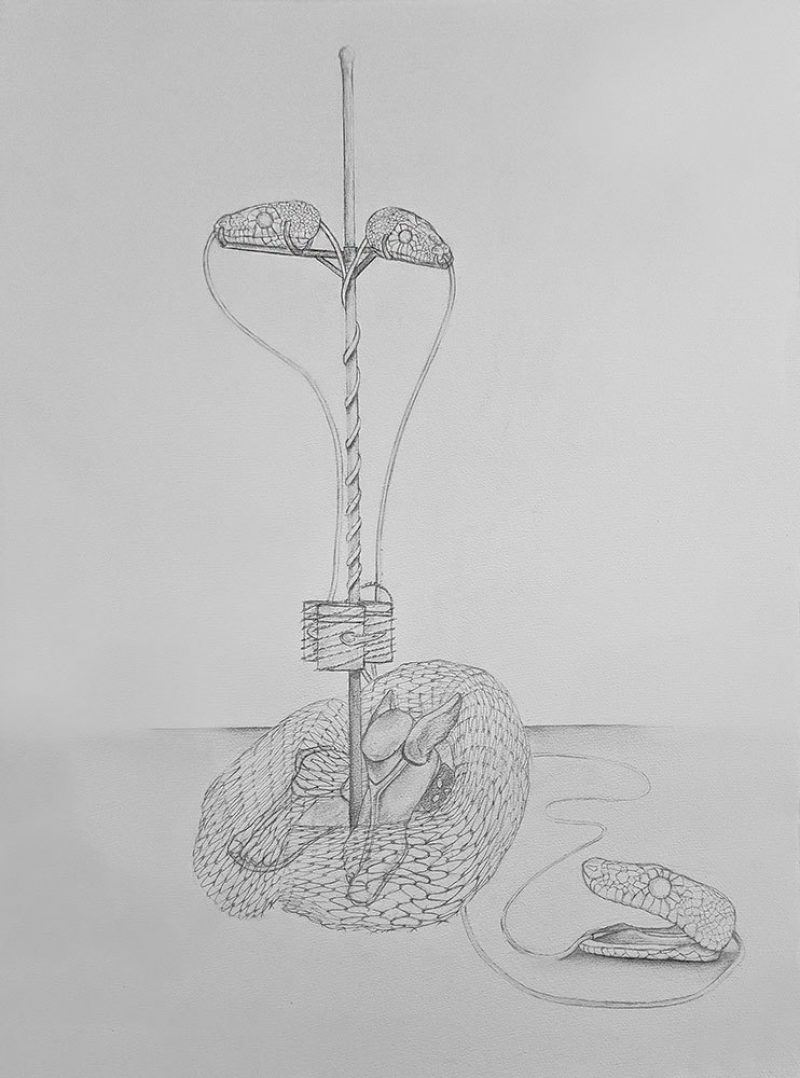 Onyedika Chuke, The Forever Museum Archive: The Untitled/A Template for Portable Monuments. © Preparatory sketch for The Shed project. Pencil on paper. 30 × 23 inches. Courtesy of the artist.

Sara Reisman What attracted you to working at Rikers Island? What is it like working with the inmates?

OC My work with Rikers is like the approach to art-making that I have outlined: reading, living, collaborating, and then getting really deep into something. There’s a huge correlation between those that enter the system at a young age and those that remain in the system throughout. It is very real for me, since I myself went through the foster care system and have worked with it for almost a decade. In many ways that is the reason why, initially, I didn’t want to engage with Rikers, but then it became the reason why I wanted to engage.

SR Considering your social engagement and instincts for excavating the politics of social relations, would you call your work at Rikers investigative art?

OC For the first eight months of the residency, I read the history of Rikers Island as a landmass as if it were land art. It was a landfill worked on by inmates. I also took a lot of tours meeting correctional officers and inmates. I created an art-based curriculum for the inmates, but then made it collaborative, based on conversations between officers and inmates so as to help develop a culture of listening and seeking solutions.

George Bolster What was the curriculum based on?

OC It included references that are canonical, like the Gustave Courbet piece A Burial at Ornans (1849–50) about a burial of an ordinary man, and how that shifted Western art. Then we looked at Marcel Duchamp through the lens of colonialism, considering where the French were positioned in Africa at the time. European art has, for the most part, held a very stable position during times when colonialism has been stable. The curriculum focused primarily on moments of dissent within the art world, topics and perspectives omitted from art history proper, and how to ask complex questions regarding these topics. 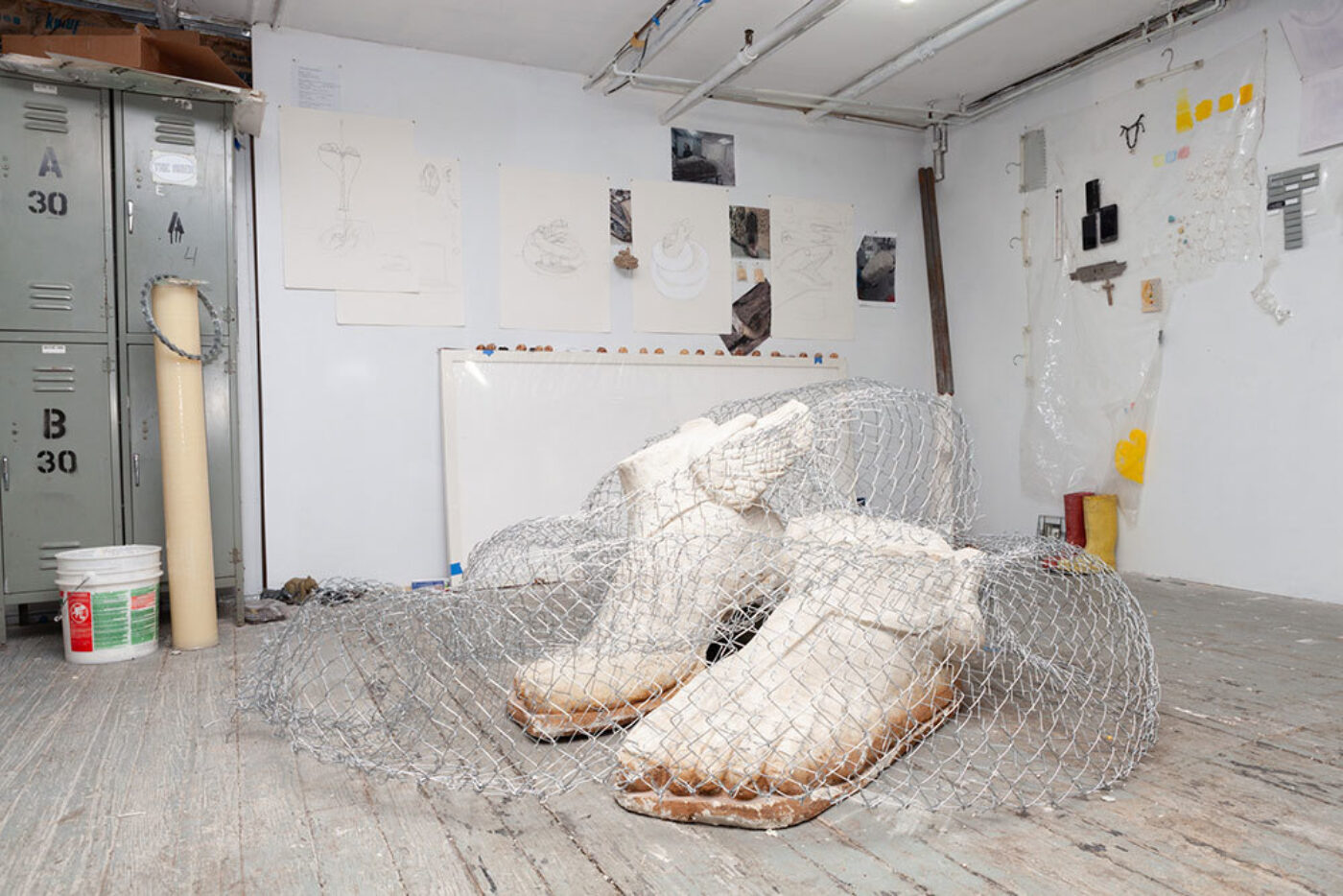 SR What do you find to be your political position with regard to Rikers Island?

OC I am trying not to take too strong a political position in order to keep myself in the middle, similar to my spiritual practice, so that I can communicate with all. When I meditate it is about not having an opinion, trying to find the center and the human. This is also what I intend for my sculptural practice.

RA Will you create new work out of what you experienced at Rikers?

OC You cannot take anything to Rikers but pencils. I would normally use concrete and steel, but I had been put into a position to just be bare bones. I had to get back to the human aspect. This took me back to how my work began as a literary essay in Libya. Every work since 2011 is part of the same body of work. It began in Libya with researching the late Roman and Ottoman empires, Fascism, Gaddafi, American imperialism, and looking at where we arrived with the revolution in Tunisia. So all my work is an archive, The Forever Archive. In my work you cannot tell where text begins and ends, and all objects point to politics and culture. The forever of the archive is inspired by Jorge Luis Borges’s short story “The Library of Babel.” The vastness of the library cannot be quantified or read. Everything I make exists in multiple historical periods. The Hermes feet that will be shown at The Shed is not a neoclassical piece; it acknowledges the myth of the figure of Mercury, the god of gateways or the figure between gateways. Underneath the feet you can see a head wearing a hoodie. This project is in line with the archive, paying attention to our current condition. It was first exhibited at Socrates Sculpture Park.

Onyedika Chuke’s work is on view at The Shed in New York City as part of the group exhibition Open Call until August 25.

Rehan Ansari is a Brooklyn-based writer, playwright, and artist who also works as a political pollster and measures impact in the field of art and social justice. In 2016 his play Unburdened had a stage reading at Meet Factory, Prague, and inspired an installation as part of Enacting Stillness at The 8th Floor in New York. He contributed an essay for the Rubin Foundation’s recent exhibition Revolution From Without…, the first in a two-year series of exhibitions on resistance and revolutionary gesture at The 8th Floor, the foundation’s exhibition and event space.

George Bolster is a multidisciplinary artist whose practice uses oppositional narratives to address ideas and belief systems from multiple perspectives. Working with research, video, painting, textiles, installation, and drawing, Bolster’s work has recently been featured in solo exhibitions and projects at HIT Gallery in Bratislava; The Lab, Dublin; Nuit Blanche, Toronto; and Chung King Projects, Los Angeles; and in group exhibitions at venues including MASS MoCA, Sharjah Art Foundation, Galway Arts Centre, and EVA International in Limerick. Bolster has been an artist in residence with the Robert Rauschenberg Foundation and SETI Institute, and was most recently in residence at the Centre Culturel Irlandais, Paris. Bolster is Director of Programs at the Shelley & Donald Rubin Foundation in New York City.

Sara Reisman is the Executive Director and Artistic Director of the Shelley & Donald Rubin Foundation, where she curates exhibitions focused on social justice, and is currently organizing a series of shows under the title Revolutionary Cycles that examine artistic activism and other forms of cultural resistance. Prior to joining the foundation, Sara was the Director of New York City’s Percent for Art program, from 2008 to 2014, where she managed more than one hundred public and civic commissions across the five boroughs. Sara has curated exhibitions for the Queens Museum of Art, Socrates Sculpture Park, the Cooper Union School of Art, the Philadelphia Institute of Contemporary Art, Momenta Art, Smack Mellon, and La MaMa La Galleria, among other venues. Recent publications include Mobilizing Pedagogy: Two Social Practice Projects in the Americas by Pablo Helguera and Suzanne Lacy with Pilar Riaño-Alcalá (published by Amherst College Press), and Elia Alba: The Supper Club (published by Hirmer Verlag).