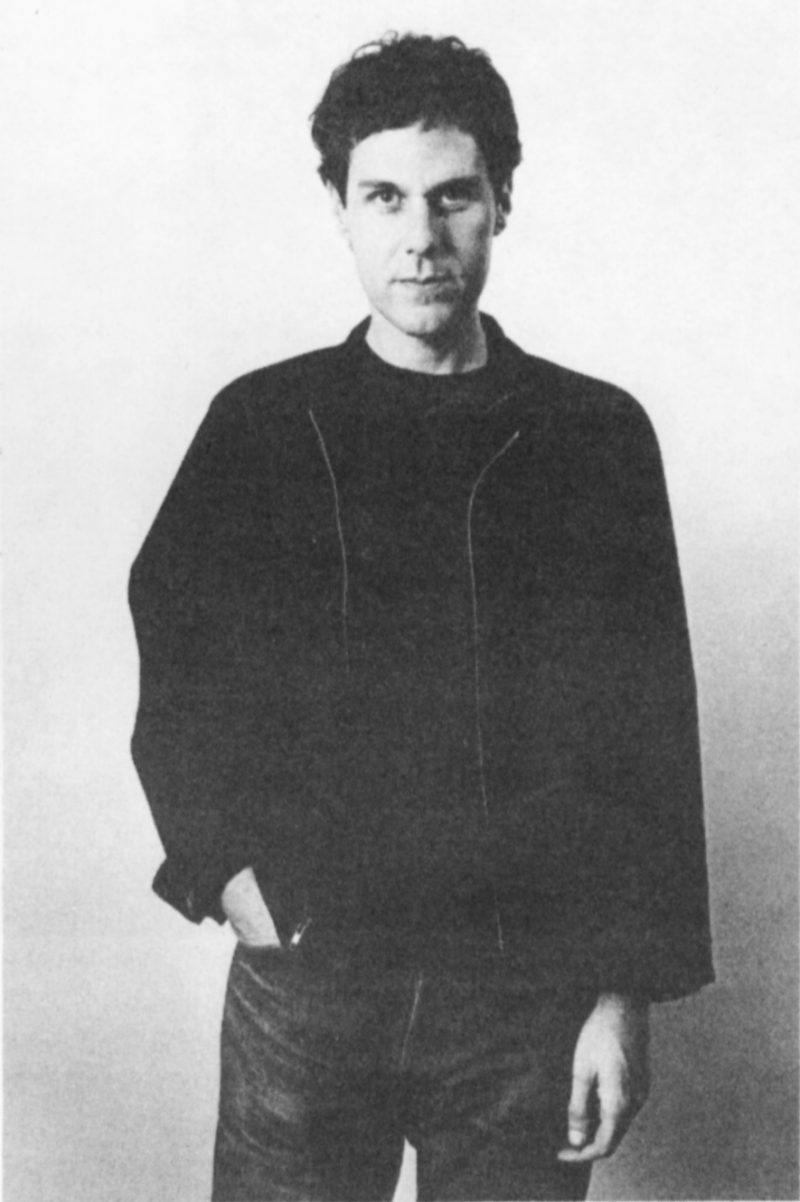 The writer, Dennis Cooper, first became known as the editor of Little Caesar, a landmark literary magazine out of Los Angeles. Cooper’s book length prose poem, Safe, was published in 1984, but the real celebration comes now, with the appearance of his first novel, Closer, just out from Grove Press.

Dennis Cooper I wanted to indicate something with a certain complexity, neither close nor far, a movement towards something … which brings you to a kind of limbo.

TG A type of intimacy?

DC Not really. It’s only a gesture towards closeness, the book is like a series of gestures towards something.

TG There’s a sort of relentless blankness in the setting of the book, it’s a confusingly artificial world … all drugs and Disneyland.

DC It’s a stylized version of a really boring world where nothing ever happens. There’s no momentum in the book at all except for the meeting of these different people. Just like a drift … like drifting. The characters are in school. I have them in school because it’s a set pattern of school-home, school-home, and sleep. A kind of mechanical going back and forth. The characters are always trying to overcome the banality and terror of the world they live in by constructing some sort of mental world, the main character, George especially. Disneyland is his idea of what perfection is, a place where everything, every emotion is stylized in order to be entertaining. Nothing really hurts, nothing’s really scary, and everything’s fed into you. The drugs he takes function in the same way. It’s as though these characters—even the murderers—are each trying to transcend a life in which nothing happens. All of them are trying to discover some kind of sensation. They’re attempting to find it in all these different ways; they link together because they see in each other the opportunity to feel something. I tried to construct the book so that it had a blankness, like you said, but there is also a … compression. The characters are trying to force something into their lives by doing these extreme things … criminal and perverse. And the way I made the book, in a kind of overly rigorous structure, for example, in stanzaic paragraphs that are always the same length, is an attempt to force some sort of beauty and rigor into their world.

TG The pace, or the texture of the book seems to change with the introduction of Pierre, and reaches an apotheosis in his monologue.

DC That’s the crucial section. He tries to reconstruct, in his mind, all the damages he’s caused and likens them to space ships and all kinds of beautiful images. In trying to account for his actions, he tries every different idea he can think of. He’s thinking of a flat narrative—straight facts—and then he thinks in poetry, dwelling on metaphors, and he then ends up as an interviewer asking himself questions. He’s left with a voice talking to itself. It’s really terrifying. The same person asks himself questions in different voices and there’s no answer. He ends up in a horrible void. That’s really what happens. To everybody, I think. When he constructs this mental other character to talk to himself, it’s really about how … everyone is so isolated. We operate out of this incredible aloneness, trying to transcend this state, attempting to connect with other people, other things. But you’re really left with yourself. Then the book is about me constructing these characters who aren’t real and having a dialogue with myself.

TG Sex and violence are overriding themes in the book. How do you situate the fantasies and obsessions you describe?

DC Writing like mine is usually dealt with as either documentary, as in nonfiction, or as “avant garde,” as in Burroughs or Genet, who I think are great. But considering a writer avant garde can be a distinction which people use to separate themselves from the action, the substance of the text. I’m trying to develop a language which is complex, but transparent. To me, this material is very stirring. It all forms some kind of void. Scary and exciting and impossible to fathom. It induces all these weird physical sensations. Like vertigo. Writing allows me to enter into this, although prose is my safety net too.

DC In writing the fantasy, I try to be sympathetic to all in some way. I find the characters interesting. I empathize even with their destructive aspects, with the complexity of their motives, their confusion. That’s what fiction is for, you can explore this stuff. To use art to exemplify moral distinctions seems ridiculous. You can’t reduce things to that level. Everything is too complex. I think that violence and sex are where the most interesting kinds of information lie. The prose in this book is a mediating device, a way of looking at this dangerous stuff. I’m against avoiding or suppressing it. So few people are trying to study this information, especially in fiction, and I really want to do this. There is important knowledge in this material.

TG In these obsessions.

DC Yeah. And in the acts themselves. In their motivations, in their physicality and in all their implications.

TG Acts of sex or violence are the few instances where people still feel … religiously passionate.

DC It’s fascinating and I want to understand it. I’m trying to create a language that brings people into this material but somehow subverts it so that they will understand it. Maybe this book isn’t there yet, but that’s what I want to do. This book is also, oh … a weird story that’s kind of entertaining.