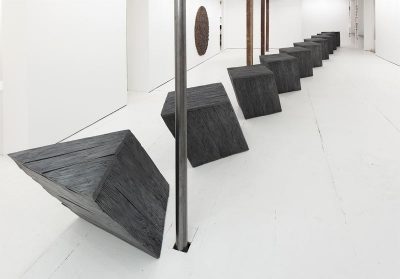 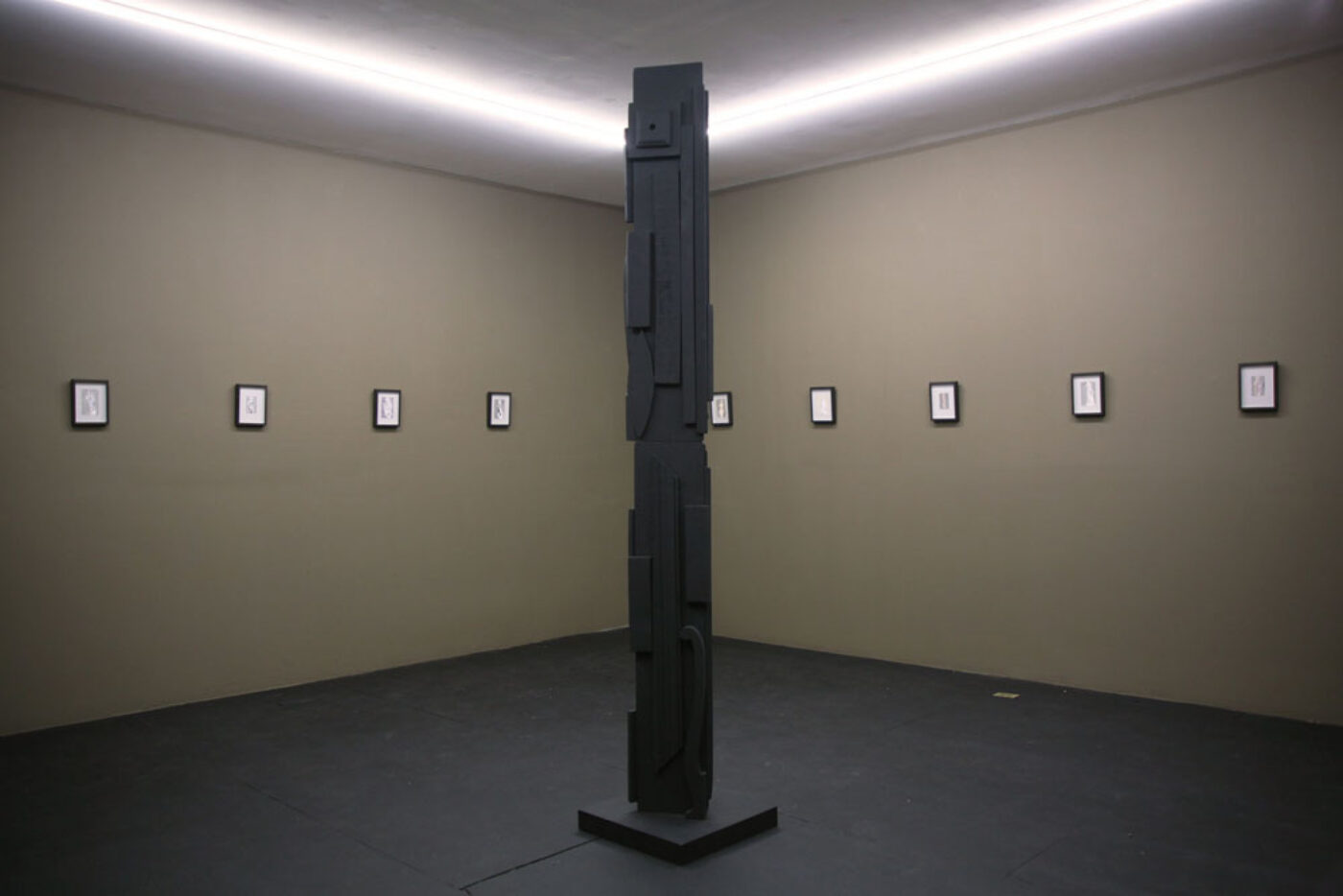 A chimera was once a strange, impossible thing. In antiquity, it was known as a fire-breathing creature, bred by the Lycian king Amisodarus, that possessed the foreparts of a lion, the hindparts of a dragon, the torso of a goat, and the heads of all three. Even by the standards of Greek mythology, which thrived on biological hybridity, the chimera stands alone. Today, the Oxford English Dictionary defines our contemporary usage of chimera as, “an unreal creature of the imagination, a mere wild fancy,” but colloquially we often give the term a more yearning dimension, as in something that we desire, but can never attain. For us non-ancients, then, a chimera doesn’t trigger our fears so much as elide our categories—it can be believed, but never seen; it’s something we seek, but can never find. And because chimeras feed off the undefinable, and off the non-normative, it makes an apt title for the two-person show now up at Invisible Exports, which pairs the new work of Vaginal Davis with the old work of Louise Nevelson.

Packed into a single, dimly lit room and spread evenly across the four walls are twenty of Davis’s small, delicate “makeup paintings.” Each one is painted with the tools of that trade: metallic nail varnish, glycerin, witch hazel, mascara, eyebrow pencil, Jean Nate perfume, Afro Sheen hair conditioner, hair spray, and pomade. These makeup paintings are portraits, and each one depicts a different female celebrity in near-abstract silhouettes (most figures are early to mid-century actresses and singers of color). In one work, Lupita Tovar (2017), Davis reduces her silhouette-portrait format to a mere column of muddled hues, which is flanked on each side by silver metallic paint (likely nail varnish). The orientation—vertical canvas with a vertical stripe bisecting a field of solid color—might even recall the “zips” of Barnett Newman, but there is nothing zippy about this work, and all for the better. Davis doesn’t seek slickness, or neatness, or total abstraction. This is Lupita Tovar, the famed Mexican American actress, rendered in thick, swirling, scumbled, crusty layers of makeup and hair-care products—the very same products that Tovar, a Hollywood actress, knew all too well. And this is one of the more interesting points about Davis’s larger makeup series. There is something striking, and self-reflexive, about portraits of female performers painted with the same products that are used to “paint” their own bodies. 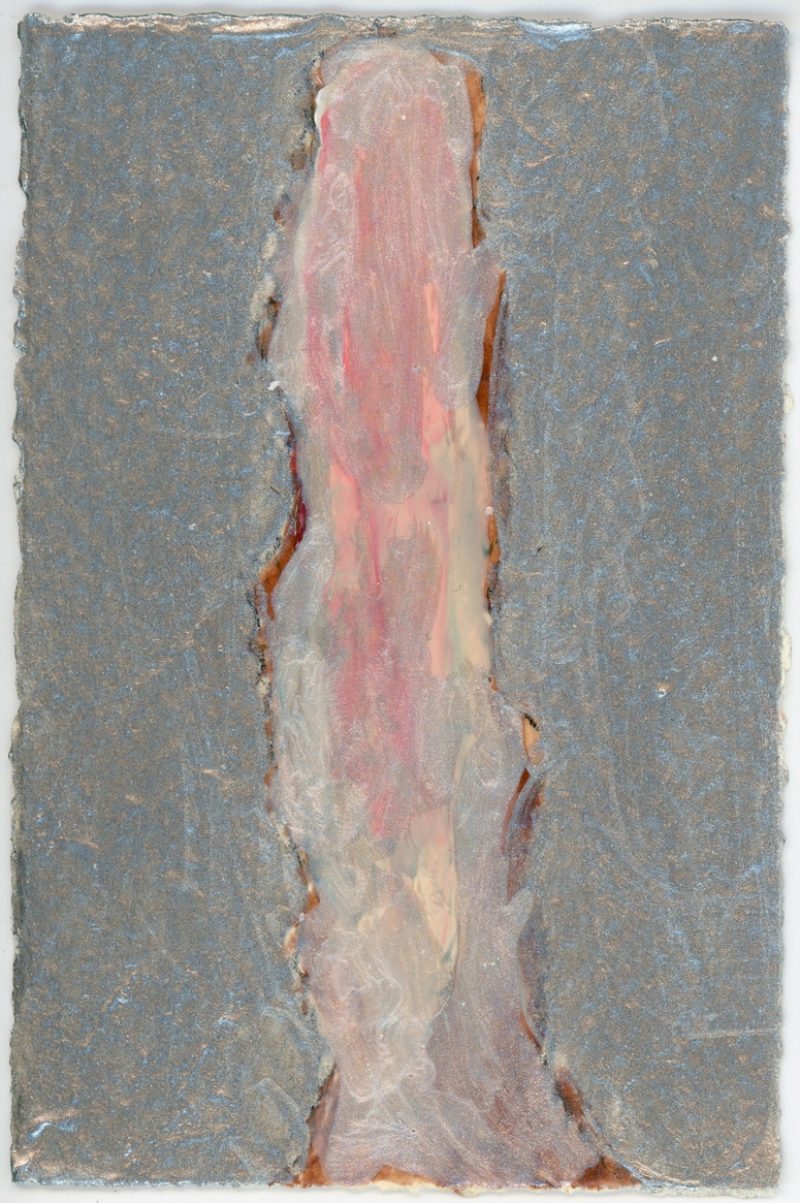 At the center of room, standing tall and spindly like a strange obelisk, is Nevelson’s stunning black-period sculpture Colonne II (1959). Matte-black, triangular, and nine feet tall, the work also features three narrow, wooden faces with various fragments of decorative moldings attached: a chair rail, baseboard, crown molding, and window and door casing. Colonne IIrises straight up like an inscrutable totem pole, and while from a distance the parts congeal into one autonomous form (due both to Nevelson’s composition and their monochromatic color), up close everything disarticulates into smaller sections and fragments—a strange passage here, a powerful grouping there. At Invisible Exports viewers will always see something else in their peripheral vision while inspecting Colonne II—namely, the dazzling little canvases of Davis, which stand like icons around a shrine. 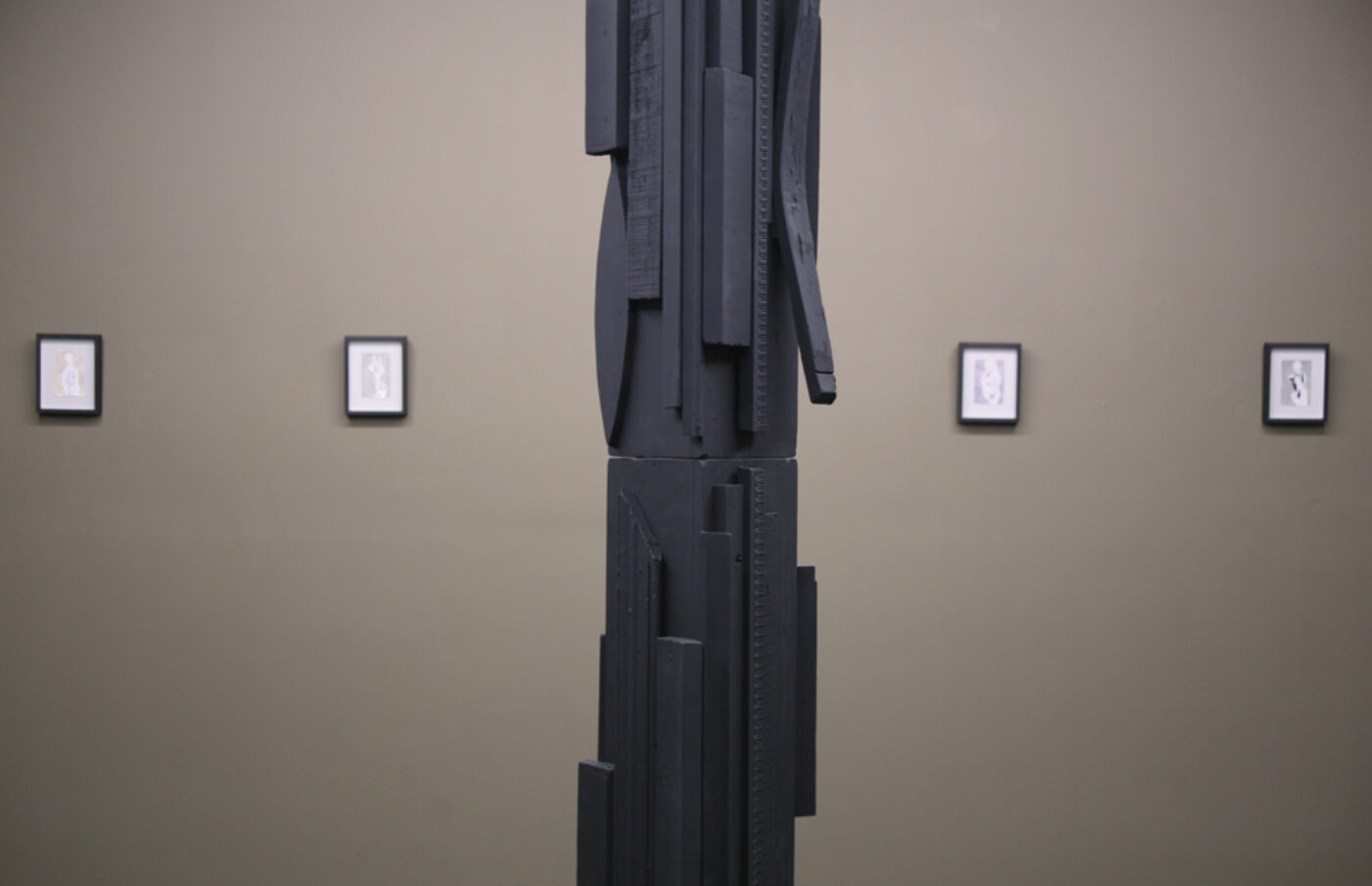 Until recently Davis was known less as a painter than as the legendary, intersex, gender-queer, performance artist. She helped pave the way for today’s drag culture while becoming a pioneer in underground music scenes with what she has called her “homo-punk” style. “I don’t fit into mainstream society,” she said in a 2015 New Yorker interview, “but I also don’t really fit into ‘alternative culture’ either… . I was always too gay for the punks and too punk for the gays.” Categorical ambiguity is a place where queerness often resides, and most everything about Davis—from her gender, to her lifestyle, to her art, to her myriad alter egos—hinges on it too. In such a thorough and studied thinking-through of hybridity and identity, we might even say that Davis has embraced a certain “chimeric” position. Relatedly, the influential queer theorist José Esteban Muñoz famously called Davis’s aesthetic “terrorist drag”. But for Nevelson (a fellow lover of fashion and makeup), the chimeric seems less pronounced, although she and Davis appear to have known each other, and Davis has cited her before. More importantly, it is Nevelson’s position in art history that defies categories. Her project is resistant to explanation or cooptation, and so despite her stature today she still flummoxes art historians trying to fit her neatly into larger narratives of modern art. What only some scholars realize is that her success, like Davis’s, is due partly to this resistance and outsider persona.

Slippages and ambiguities, or even reversals, unfold across Chimera. The delicate, glittering, gaudy makeup paintings surround the massive, light-absorbing, somber totem. As a result, twenty little bodies of negative white space come into orbit around one massive body of black, positive space. The white/black interplay seems especially important here. Several of Davis’s portraits are of actors who embody, or stage, racial ambiguities. Fredi Washington, for instance, was a light-skinned African American woman who became famous for her role as Sarah Jane in Imitation of Life (1934), in which a light-skinned black woman can/chooses to pose as white. Davis also paints the white actress, Susan Kohner, who reprised the role in 1959. And so again Davis probes the chimeric, or in this case the hybrid identities and misperceptions of mixed-race people, who are simultaneously placed into this or that category while not fully belonging to any of them (Davis herself was born of creole Black and Mexican American parents). 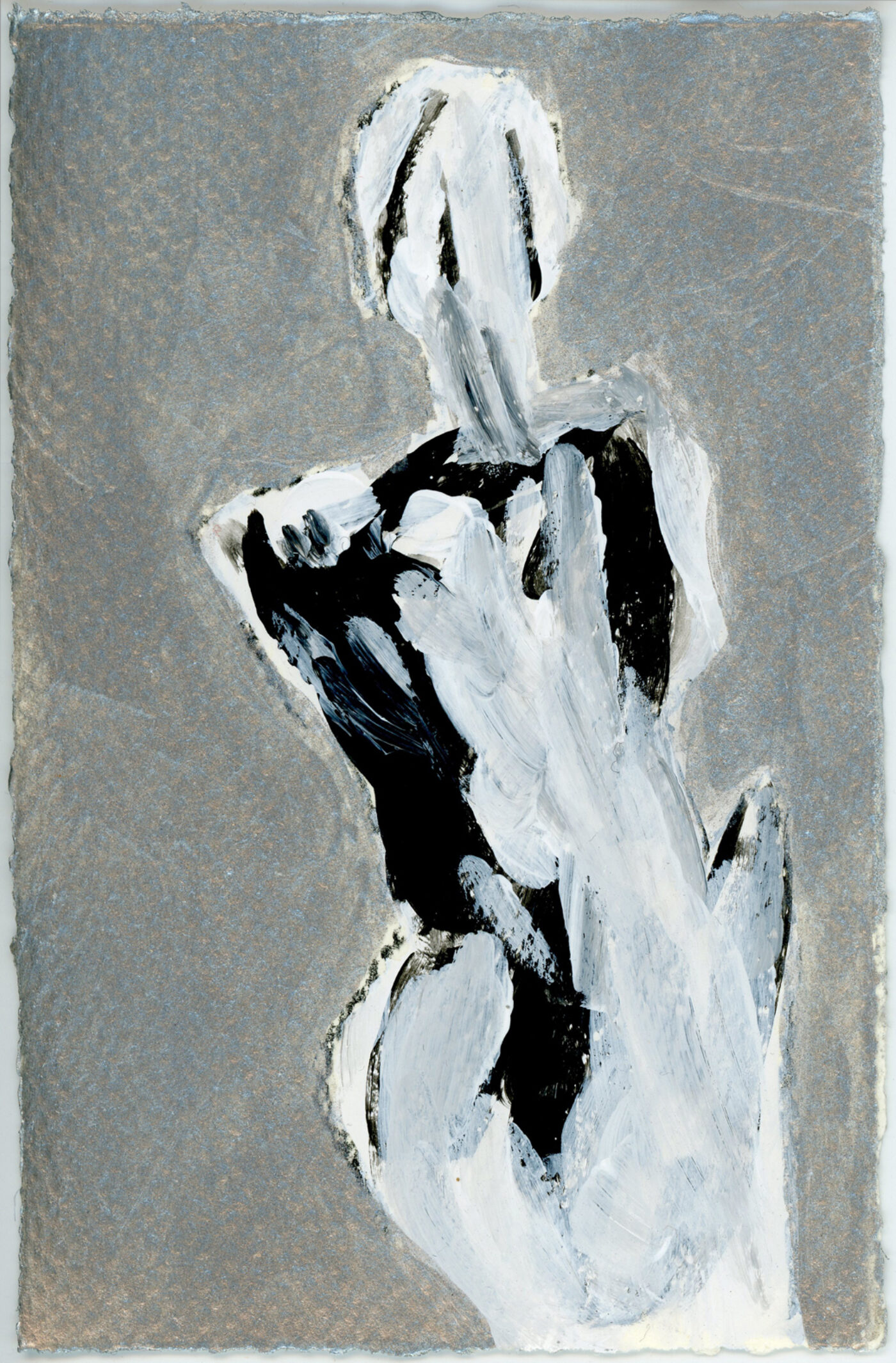 The show at Invisible Exports is small but mighty, and deserves a visit. The first chimera—that raging monster who terrorized the Mediterranean—might be gone, but chimeras of a different sort still abound. And we should be grateful for them, too, because their refusals to be ordered or contained help us distinguish the ways that we are all ordered and contained.

Matthew J. Abrams is a writer, critic, and scholar based in New York. He holds a PhD in art history from Yale and is currently finishing several book-length projects. You can follow him on Instagram. 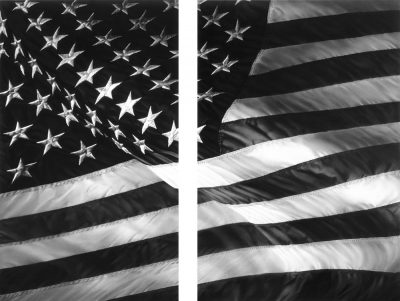 For the Birds by Kevin Kinsella 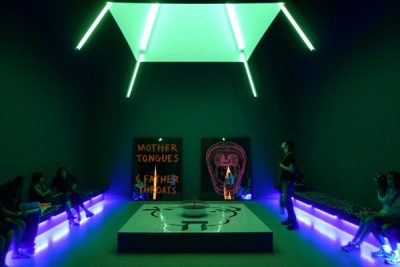 In Beyonsense, Eurasian artist collective Slavs and Tatars channels its inner Zaum in a celebration of the twists of language across cultures, histories, and geographies.