Poet Deborah Woodard on capturing, repairing, and reincarnating lives both real and imagined. 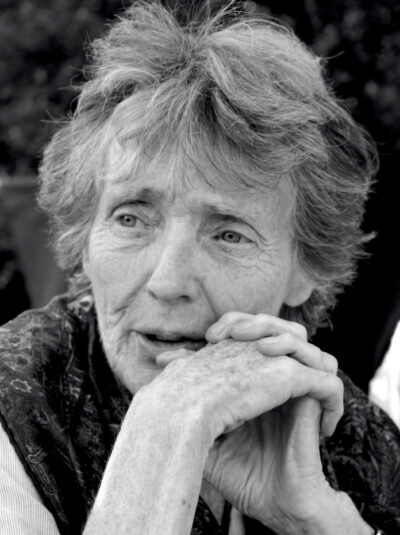 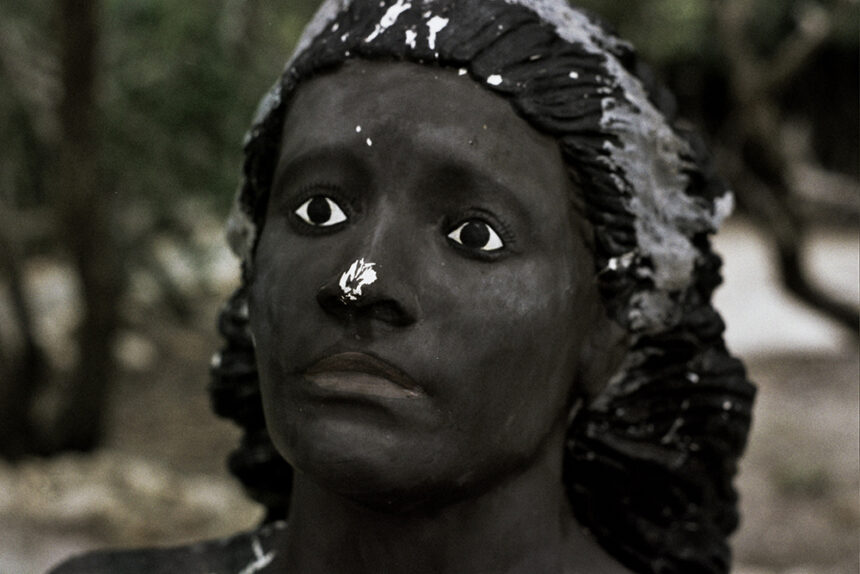 Caitie Moore At first, I read the eleven different sections in Borrowed Tales as autonomous and the discrete poems as angles of light shed on a particular tale. By the end, I felt the sections were more interdependent. How do these sections work?

Deborah Woodard Each section is a character’s name, and each name leads to a tale or tales. I like my publisher’s idea that the characters congregate, that they somehow traverse time and space to entwine and germinate collectively. In other words, that they have a collective identity of some kind, even as they range from Shakespeare’s Hamlet to a friend’s son (Vince), and from a former student of mine (Elaine) to a camellia bush (Camellia). That last one was my friend Don Mee Choi’s idea. She has such wonderful instincts. And she helped me organize the names on a little piece of paper. I can still visualize this paper with the founding names, to which I added others as the collection developed. I felt very free to explore in this book, and so poems about the Catherine Ferguson Academy—a school for pregnant and parenting teens—led to a poem about Catherine Ferguson herself. After I wrote the Lorna section, I added a section about Lorna’s children, the Gordon and Martha section (loosely a tribute to the artist Gordon Matta-Clark). Beyond the tendrils extending and entwining, I would say that my old theme of orphanhood unifies the book. Ultimately, all the characters congregate and give me the courage to stand newly bereft, in a wet bathing suit in junior high school in the Deborah section at the end.

CM I appreciate the frank tone of that pre-teen you at the end:

Recess quieted the pool: no lips evoking yours,
your hairspray! How could you do anything? You were dead. Dear dross, I don’t move.

The line length of most of your poems is notably long, lush. At first glance the page might look as though it’s in prose, but it’s only very close to prose, pulled back in the end from the right margin. Were you going for this initial illusion? Or are your line breaks a wink at the poet/reader?

DW Thanks for picking up on this. Yes, I was clinging to my line breaks for dear life. I still have dirt under my fingernails. The poems became quite sprawling. This was partially because I collaged my own worksheets together with borrowed materials to create rough drafts, and, in an obsessive way, became attached to scotch taping the fragments of text to the edge of the page. I’m grateful to Lori Anderson Moseman of Stockport Flats for giving me a book with ample pages on which the lines could cavort. I had to rebreak some lines, though, even with an oversized page.

CM The large size and square shape of the book, rather than being cumbersome, are very grounding. However, the “Borrowed” of your title destabilizes the relationship between the reader and the “Tales,” and might even imply some readerly responsibility. In your endnotes, you make it clear where the stories originate, but still, the term remains ambiguous. Lending can be a generous gesture or can add to debt-society. Is this term at all a warning? Or at all sinister?

DW Borrowing made me anxious at times—hence, the impulse to “come clean” in the end notes. But the reader is completely off the hook! Initially, I just borrowed from myself. I wrote the first drafts of Hamlet by collaging together my old worksheets, guided by the laws of chance.

When my husband and I bought a house, the first house I’d had since I was a kid in Vermont, I’d very romantically thought of my corner of my Seattle in-city neighborhood as a hamlet. So basically I was describing what I saw from my upstairs study window, and the word “hamlet” came up now and then. Later, I was commissioned to write some poems in response to Heide Hinrichs’ solo show at the Seattle Art Museum, “Borrowed Tails.” “Inkwells” was a response to one of Heide’s pieces, a pencil-perforated table; her piece made me recall the old desks—with their atavistic holes for inkwells—in the one-room Vermont schoolhouse I went to from first to fourth grade. I folded in my own notes with public domain materials I found online. This was the start of my borrowing and the slice-and-dice mingling of private and public.

I’d like to mention one plundering mentor of mine: Dario Robleto, who uses found materials to create his gorgeous, whimsical, socially and historically engaged, and intensely resonant artworks. For instance, he melted down vinyl records by Patsy Cline, Hank Williams, and others, then created flammable match tips from the materials, created matchboxes to house the matches, and, finally, laid them out on bars in several local honky-tonks, awaiting the “chance to go out in flames.” Ideally, any act of borrowing is also an act of imaginative reincarnation.

CM I love the idea of intervening into bar life as a matchstick, or infiltrating multiple places in the form of objects. In some of your sections, the poems inhabit two or more present moments, seeming to look back and critique while anticipating the trauma of the characters. This creates a sort of engaged confusion where the poems are attempting to repair a story the best way, which is outside of time. In the Junius section, this comes up in “Newsprint.”

For Oliver, a shed came to mind. Hadn’t Junius raised dogs? Where’s my coat?
wondered Olivia. Did they turn my collar like newsprint? The story of Junius
ran in all the local papers. They paid him an honorarium for remembering—
this mute black man castrated long ago.

Or perhaps “Pueblos 1,” in the Lorna section, illustrates what I mean more directly:

What happens next is time
becomes a solid composed of Elmer’s Glue mixed with saltines.

How do these poems relate to time?

DW Yes, there are stories in the book that need repair. I’ll start with Lorna, an actual person, for whom I created a mostly fictional narrative. When I met Lorna, she was a pregnant college student at Goddard College in Vermont, which is where my father taught for a time. She had a boyfriend named Phil, and they were planning to put the baby up for adoption. This scenario was already somewhat challenging to me as a ten-year-old. After my mother’s death, I moved to New York City to live with my father and stepmother. Lorna popped up again, this time as a waitress and clearly no longer pregnant. Because Lorna had travelled to this new place (almost a new shore), the old place (or shore) remained more tangible to me, though we didn’t speak of it. We were now so clearly different, each marked in some manner. In some foggy way, I realized that we all had tales, and that they involved consequences. But what a boon it was to have a familiar person around from the “old shore” to bring me little packets of Sanka and paired saltines from the diner where she worked. So, there were the makings of a new life for us, the materials. As I spun her tale, Lorna gradually became an artist figure, working in art studios and the like.

In “Pueblos 2,” she tries to ward off the alarmingly swift ruination of street art installations. I drew upon David Wells’ “Hunter and Deer” series and Charles Simonds’ miniature dwellings—on streets and public parks. To use your phrase, she is combatting ruin. Her ambivalent maternity comes to the fore. But it is children who are creating the ruin, fostering the creative disorder of play. Lorna is simultaneously nauseated and released: “Play was repugnant yet stirring, like branches of lilac turning brown.” She accepts disrepair, I suppose, as the price of involvement and connection.”

In any case, I think of time as being kind of like a weird loaf cake on display in the diner where Lorna worked, unappetizing but stable.

Junius is a historical figure who was institutionalized for most of his life for a crime he didn’t commit. A mute, he lived outside of language as the institution lacked competent signers. How tragic can it get? But he was as resourceful as one could be under those circumstances. According to his biographers, his signed nickname in Raleigh Sign (a sign language variant created by the deaf pupils themselves at Junius’ school) was a joyful pounding on his chest. He appeared to have a fund of life-energy that the institution and its mangling couldn’t completely stamp out. He seemed to need friends, and these two characters I had kicking around, Oliver and Olivia, along with their aunt Rebecca, volunteered. Oliver and Olivia are trying to understand what happened to Junius. They’re outraged by what has been done to him, and dedicate themselves to his imaginative renovation—which can’t be achieved, of course. They time travel to the scene of his undoing, the county fair where he cut out from a school outing—a harmless transgression that led to his expulsion from the only school for deaf African-American children in the state:

In their
retelling, Junius would make his curfew. He wouldn’t get expelled from deaf school for crossing
ABigField.

Ultimately, to eulogize Junius, Oliver and Olivia work on their creative projects. Let’s face it: this is the only approach I—or, by extension, my characters—know!

Caitie Moore is a poet, educator, and curator living in Brooklyn, NY.

The Story of Our Lives Do Not Have Faces: Sally Wen Mao Interviewed by Anne Anlin Cheng 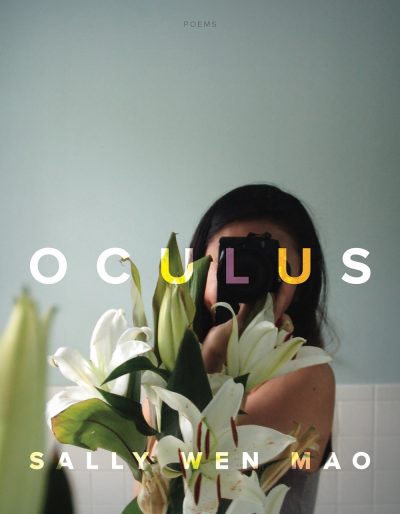 The poet on her new collection and how a person lost to history can survive in the imaginary possibilities of art.

One Poem by Mike Lala 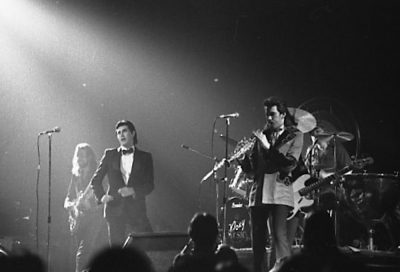 Out, like fireflies, from the inter-dimensional, / silver disks at edge of picture hover over Hillary / with swaddled child, John Podesta counterpose beside her, / in a painting I’d like to paint, had I been a painter, / trading in detail from the too-smooth desert