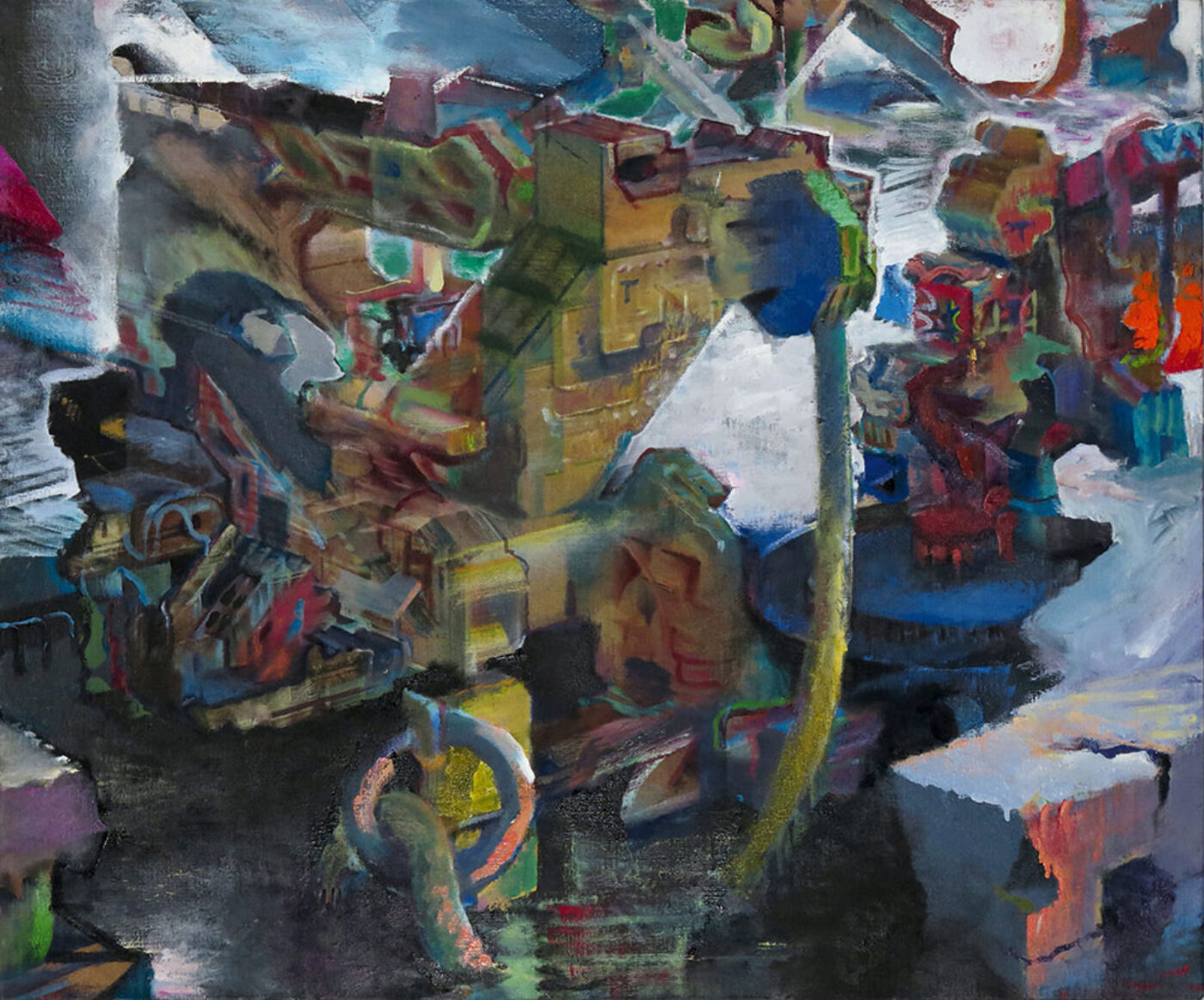 David Brody has discovered a way to improvise abstraction with the help of math, producing exaggerated perspectives that make you feel the excitement of flying. The flight path might be up or down—depending on where you look—over familiar yet impossible imaginary places.

Brody’s paintings and writings share a capacious intelligence and flowing invention that are as complex as they are compressed. The patience spent on his paintings—years in the making—stays contained in them and encompasses all his findings and revisions. You feel them: they hush the ears and slow the blood, and make life feel a little deeper.

At first glance, his paintings resemble real places—fragmented cities or peculiar but credible geological formations—but you soon realize that they’re the product of an idiosyncratic mind. The images’ diverse and unique details reveal that they are metaphorical, poet-shaped, nonobjective.

A dozen years ago, Brody was painting chthonic or subterranean scenes, which I understand to be the anima mundi, the world soul. They sing of primal places—sandstone tableaux or caverns, either carved, eroded, or both—and seem to grow biological forms, such as fossilized phantasms, skeletons, gnarly tree roots, and even architecture. The calcified life-shapes make an elegant correlation between bone and stone, where a golem might suddenly stir to life.

Noticeable change in Brody’s work appeared in 2007, when the paintings enlarged to survey a greater expanse of space, opening up on clusters of uninhabitable architecture. Dilapidated megalithic forms are positioned on an unusual perspectival system that puts the vanishing point out of sight, high above the picture frame, and increasingly intensifies the steepness of the painting’s bottom half. As a viewer, you feel you’re hovering over the image while being drawn downward into it. 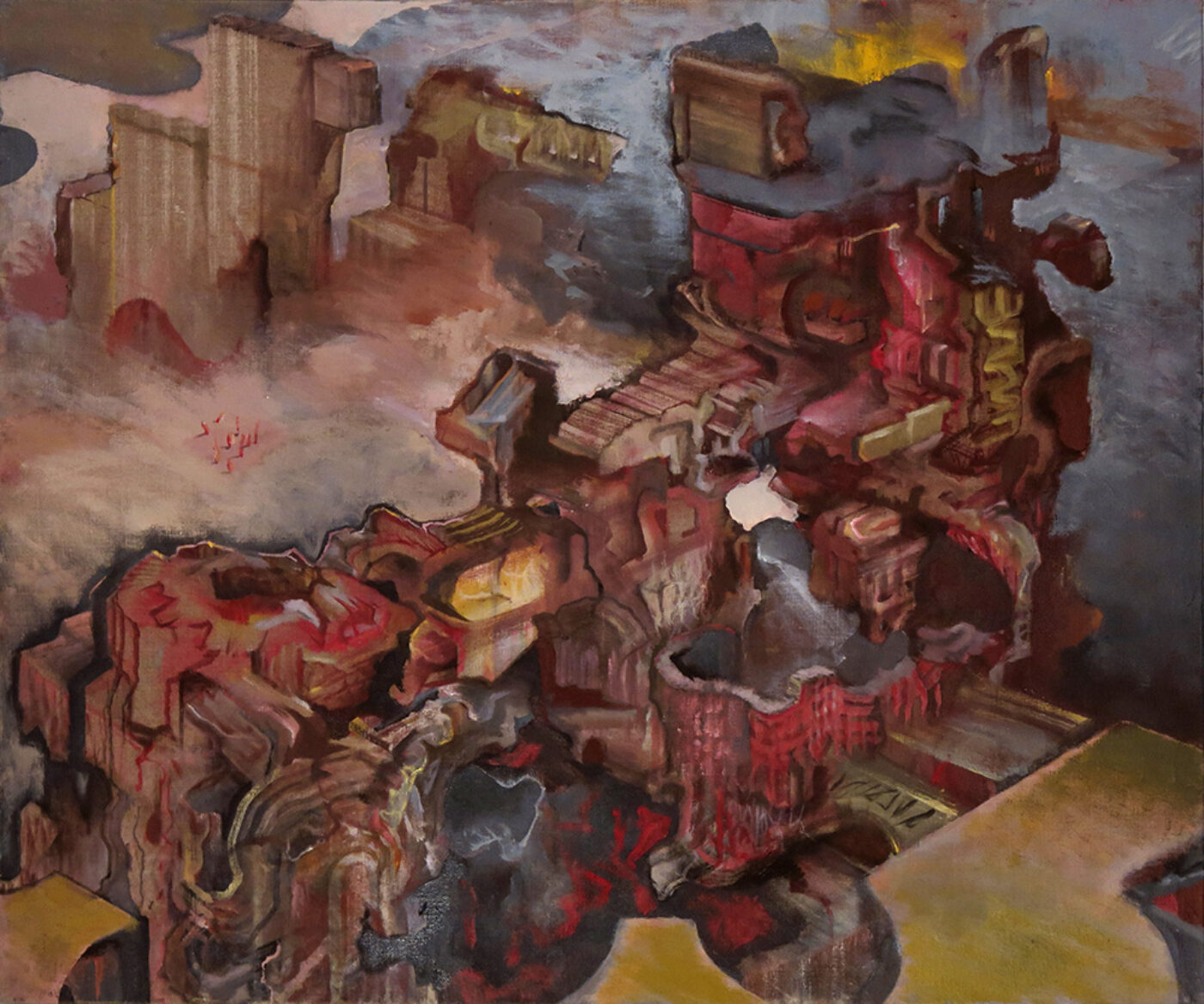 One of these paintings, Embarcadero (2010–11), includes a central construction that seems like a wounded-mammalian industrial fortress. It’s a pulpy and damaged thing-place; iron, rust, and blood appear to have been exploited and exhausted for someone else’s powerful purpose. At this stage in Brody’s development, color arrived cautiously to share placement with exposed linen weave. In these canvases, the greens glow with the healthy zeal of early colonizers, the yellows radiate citrus, and the blues are deep and low like stained-glass windows.

About four years ago, the view spanned out even wider, got more complex, and filled up with factions of colors that had never met before—artificial and natural, sweet and sour, garish, girlish, gunmetal, Victorian, neon, corroded, archaic. In paintings such as Stench (2011–16) pigments cling like cosmetics to the clay-and-rock terrains. As in a peyote hallucination, where a bone-dry desert suddenly blooms into a wall-to-wall carpet of gorgeous orchids and irises and tulips and pansies—the paintings spring to life from the dead, the wasteland revived. 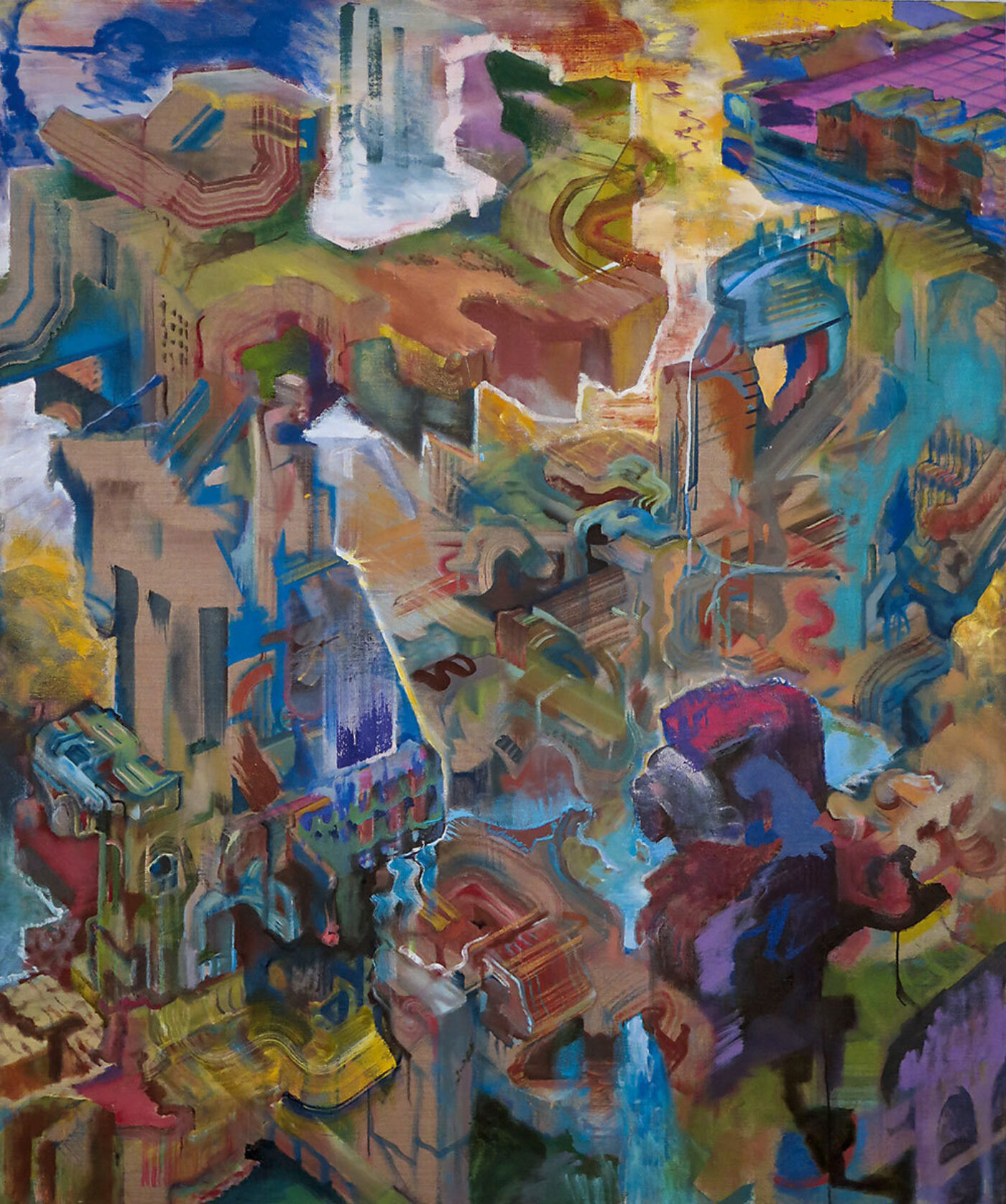 New to Brody’s pictures is life-giving water—sometimes spilling over embankments or rising as steam—making possible an ecosystem for simple life-forms like algae or the protozoan zooxanthellae that colorize coral reefs. The water flows down corridors and crevices to settle, down-canvas, in resting pools.

One relevant constant in Brody’s work is that his scenic overlooks on an ancient future never include human or animal beings. Axis (2011–16) condenses multiple time periods and places: a mysterious structure that looks to be masoned with ancient Egyptian limestone is situated near an ice floe, itself below a fiery cluster of tropical party colors. It’s midday in the northern portion of the painting and midnight in the brackish water to the south. Ever since artists found the freedom of abstraction, making paintings and drawings without a plan, knowing that their conscious and unconscious decisions would eventually guide each picture’s unpredictable adventure to a meaningful end, art gained a new potential. Brody, with both intellect and imagination, has created a hallucinogenic travelogue of his mental progress, and we’re lucky to be able to watch it.

Elliott Green lives and makes paintings near Hudson, New York. He has received a Guggenheim Fellowship, a Pollock-Krasner Foundation Grant, and the Rome Prize. His painting Wake the Veins is on the cover of the recently released album case/lang/veirs.

A Psychogeography of Abandonment: An Interview with Sophia Shalmiyev by Cooper Lee Bombardier

The memoirist on her relationship with motherhood, immigration, and psychogeography.