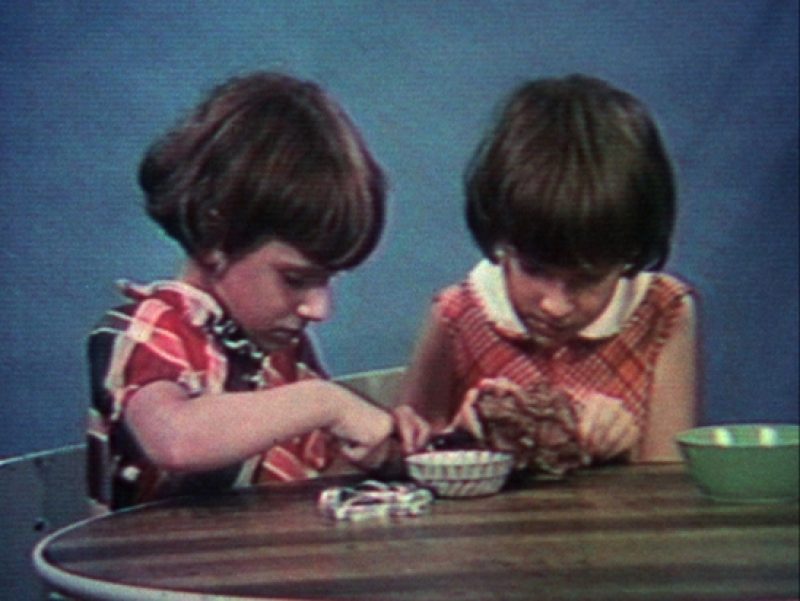 Grace and Virginia Kennedy in Poto and Cabengo, directed by Jean-Pierre Gorin. All images courtesy of the Criterion Collection.

“You can’t be a foreigner in a language other than your own,” intones the narrator of Routine Pleasures (1986). Framed as a statement, it is a simple line that will be questioned, in multiple ways, throughout the work of Jean-Pierre Gorin. After a brief but fertile period working with Jean-Luc Godard, creating formally challenging and politically dense moving image experiments under the name The Dziga Vertov Group, Gorin moved to Southern California, eventually joining the staff at the University of California San Diego. It was during this period that the “California Trilogy” was born: a set of films as experimental as his work with Godard, but broader and less dogmatic. Gorin approaches his subjects from a distance, but without relying of conventional forms of narrative documentary—the films read like pages from a journalist’s notebooks, filled with questions, concerns, and various approaches toward the material at hand.

In Poto and Cabengo (1980), Gorin works out his relationship to the subject as the film progresses. Virginia and Grace Kennedy were twins in the San Diego area who, according to newspaper headlines, developed their own unique mode of communication, a mock-language made up of bits and pieces from the different dialects surrounding them each day. In the film, Gorin finds himself questioning his role in their lives, and the story he is trying to tell. Is he just another tabloid reporter, interested in the strange details of their background? Does the story of the twins in some way remind him of his own, a foreigner now living in America? Or is the story of the twins somehow distinctly American, the key to a place he is striving to understand? The film does not provide answers; instead, in presents a variety of options on how to look, and what it means to look, at this evocative story. In what will become a familiar device (or, really, lack of a device), the film bounces around from a view akin to direct cinema—with Les Blank behind the camera—to something more critical, even essayistic. Time spent with the family and doctors is set against questioning voice-overs and title cards which at times support the images and at other times contradict them.

Routine Pleasures opens with a simple dedication, an oblique joke: “To Chuck Jones and Gustave Flaubert.” Somewhere between the two – the broadly comic and the painstakingly specific , the macro and micro, the American and that Frenchman—is where the film begins, and it’s this space, and the filmmaker’s position within it, that Gorin investigates. He again starts off with a simple story: a small group of model train enthusiasts who gather together on the outskirts of town to practice their obsession, “America under budget and in a shoe box,” as Gorin says. This is only one strand of the film though, which suddenly changes gears, introducing the story of Manny Farber, film critic and painter, whose polyphonic visual and prose styles offer a blueprint for the film to follow. Farber was a colleague of Gorin’s at UC San Diego, and their conversations—examining Farber’s paintings, and the cinema—echo, and often correspond with, the story of the model train gang. If Poto and Cabengo is interested in the language of words, Routine Pleasures is interested in a more simple form of language – the language of work, repetition, and nostalgia. Gorin’s unanswered question remains: “Was I after all just in search of a metaphor for my own work?” 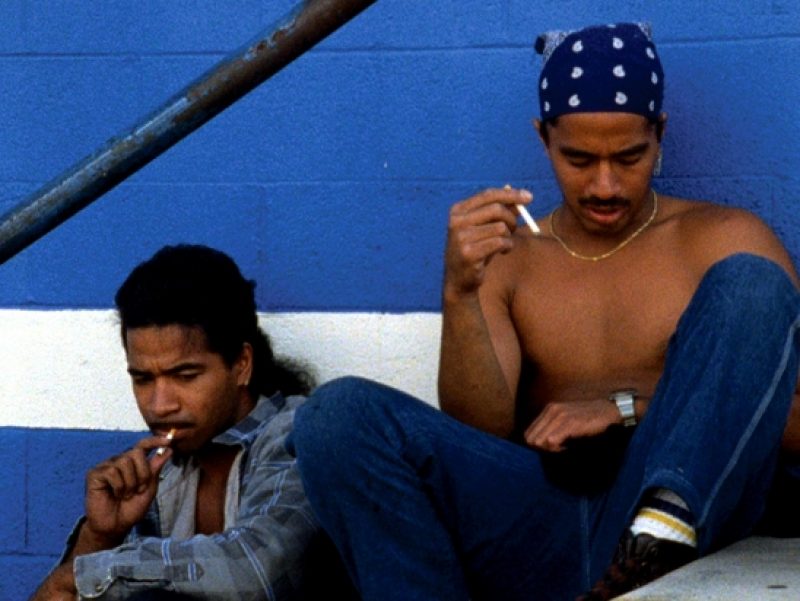 Still from My Crasy Life, directed by Jean-Pierre Gorin.

The most interesting film of the trilogy for me, and the hardest to untangle, is My Crasy Life (1992). A documentary about the codes of a Samoan street gang in Long Beach, California, the film is strangely alienating; staged and stiff scenes, beautifully photographed by Babette Mangolte, and Gorin’s usual narration replaced with a robotic voice, are contrasted with sentimental flourishes and personal touches. By removing the filmmaker’s voice, Gorin gives more room for the subjects to create their own story, to investigate their own coded languages and position within society. The film is made up of schematic breakdowns of street slang, long-take views of parties and rap ciphers, as well as detailed stories about the history of each member—how they were raised, what the gang means to them, and what it means to be a Samoan in America. Gorin, the invisible presence, is still felt; the incessant questioning, the zig-zag narrative approach to the material, the focus on communication in all its forms. The final third of the film follows one of the gang members back to Samoa, to reconnect with family and friends. The gang member, dressed in street clothes that would go unnoticed in America, now sticks out like a sore thumb in this idyllic wonderland. Gorin sees the story of the gang members as his own—a displaced citizen in a zone between the past and the present, a perpetual outsider, belonging neither here nor there.

These three films never provide the keys to unlocking these stories; and, unlike traditional documentary, that’s not really the point. The provide the viewer with the raw material, and suggestions for how to look at it, possibilities for how to process it. They are puzzles meant to be left in pieces. Or, as the robotic narrator of My Crasy Life says at the film’s close: “No shortage of data. But somehow, it’s a… mystery.”

“The California Trilogy” of Jean-Pierre Gorin is available now as a three-dvd Eclipse Series box set from the Criterion Collection. 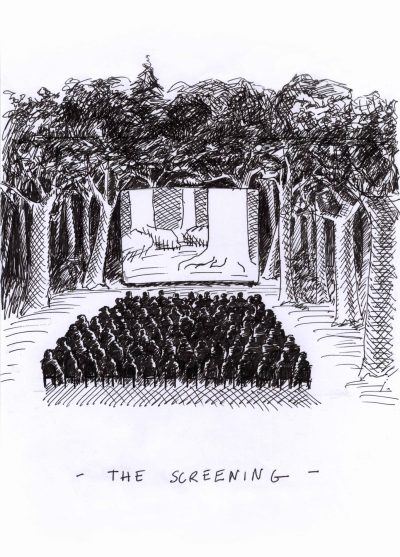 Ariane Michel wants you to pay attention. In a work that premiered in New York on Monday evening at Van Cortlandt Park—aptly dubbed The Screening—Michel held up a mirror to film attendees by showing them a likeness of themselves on the silver screen.