Crossing Her Mind by Kimiko Hahn

I advise a promising student not to settle for flower when hibiscus is more precise. I point to the draft, “her aching fingers,” less engaging than her other lines. But, the student replies defensively, fingers are important to lesbians. She grins. I pursue the point: Fingers are fine. Cliches are not. We smile at one another.

In my apartment I consider the sassy retort, meant to cut me off and win a point; to defend the line even at the expense of the poem. It almost did cut me off. I think about her instead of the stew burning in the kitchen. Her position excluded me from women. A woman excluding a woman for a woman. I call Sarah and in repeating the story find my body shaking, as if cold, very cold but good to have such a strong sensation. When had I shivered so deeply before? At 11, the first time I saw blood in my underwear? I hold my knees to my chest.

This was the third time Hana was reading Murasaki’s The Tale of Genji. She was not sure what the attraction was to a novel about a man’s, even a sensitive man’s, romantic exploits. In one translation his encounters read like rape. Just before the midpoint she was struck by the moment that Genji returned Murasaki after spending the night with his second wife, remarking that he had fallen asleep there. Hana was furious for Murasaki but realized how close her own manipulations were to Genji’s: teasing so a lover would not suspect attention was really elsewhere.

Three women meet for coffee and as one sits down she explains she’s late because a friend had dropped by to borrow a book. His 18-month-old had spent the few minutes there on a suicide mission from a bowl of marbles to a letter opener to incense ashes. She remarked how much fun a child might be but not for more than 30 minutes. Although, incidentally, the child’s mother is a surgeon.

Maya, the student, brings the poem back. With fingers, like trembling stamen. A hibiscus. She confesses, Alexis and I went to a flower shop to sniff and poke as discreetly as possible. As you suggested.

Hana wondered if she read Genji for the number of women creating alliances against other wives; an umbrella in a snow storm. Or if she read it to search for a mother. Possess someone the way a child possesses a mother. My mother. She’s my mother.

Tacked all over campus: “When a woman loves a woman it is the blood of the mother speaking—a Carribean saying.”

Or did she read and reread the classic to rehearse various types of closures: death, abandonment, divorce, disinterest. In death the finality was often pricked by insatiable ghosts: one mistress against another. The plaguing triangles.

Maya writes about having a child with Alexis who would carry their baby without further need of a biological father. Without the one who towers over the constant recovery of symbiosis. But isn’t there always a more dominant one in any relationship—not the nature of male/female but of relationships? Or is “dominant” not even the right word—or the issue?

Does the heart resemble the vagina? Does the vagina resemble a persimmon? Does it feel like a tomato to the tongue? Does it taste like tears?

I watch my students drive off for their vacation. One in a sweater the other knit, cinnamon. I had given them a basket of apples for the road: black twig, macintosh, golden delicious, granny smith, rome. I recall a vacation with Arlene. The long walks on the beach at night, high on margaritas, where we discovered how comb fish glow in the dark.

I tried to pick one up but it was too smooth, and even jumped before dropping it. Arlene picked one up and remarked how female. We couldn’t see one another. Only the comb fish in her hand.

When they move their transparent apparatus seem turned on by an electrical current.

On an island off the coast of northern Canada the society’s language is gender-based: aside from the grammatical structure there is little commonality. Girls and boys are bilingual but do not utter the others’ language.

On that same vacation our cottage contained only a double bed and no sofa. We joked, what do the owners take us for? and without pause slept together, our bodies warming the linen but never once touching.

The only straight person on the panel, “Marginal Aesthetics,” Kisha was elected to represent all heterosexual black women. She joined in the gossip later, which girl in the audience was “cute”—why not! Her attention later focused on a man, ten years younger than herself. Exceedingly edible. Formidably available.

Is sex as exciting without the risk of pregnancy? The pause before threat of commitment, even an aborted one? Tom wanted a commitment without responsibility. He didn’t last long. Carl wanted to control with the probability. Darryl was impressed with his own potency. The possibility of conception was thrilling, despite each person’s needs.

Semen also represents poison in this society of death.

What of an aesthetic based on emotion or fragrance—rather than conceit? Who would spearhead such a movement? (Spearhead?)

A postcard from Maya and Alexis: We pick blueberries for pancakes every morning, write poetry and postcards in the evening.

On a chartered bus to a DC demonstration, my younger sister and I sometimes held hands. Several women assumed we were lovers. Assumptions so tacked to gesture.

In the East, orchid boat. In the West, tender buttons.

I recall my first office job. Mary, the secretary in the next cubicle, was a professional secretary and could batter each machine expertly as well as take dictation. A short Irish woman, mid-30s, single, bleached blonde hair piled high on her head, plucked and redrawn eyebrows, polyester pants suits, we were opposites but for our racy sense of humor, and would snicker when the custodian smoothed his hair back every time he passed the dark glass windows behind us.

Mary shared her love problems with me: her boyfriend, a cop, kept calling her in spite of a break off. She knew he called during the day because she put pennies on the phone which the ringing vibration jiggled off. Torrid. He wouldn’t take no for an answer. I wondered what smouldering sex she concocted for this guy. She took swigs from a bottle of Pepto-Bismol in her file cabinet.

The heart is a simple muscle that pumps blood; why the grandiose emblem, the symbol for everything one hopes for?

The day I was nearly fired for missing a couple of deadlines she took me out “for Chinese and for advice.” After a glass of plum wine she told me: I have to tell you something and I hope you won’t hate me. I’m gay. I told Nancy in Development and she won’t talk to me anymore. I’m gay. Chris is a woman.

Mary and I left the Lotus Lounge and walked. She asked how I felt. I was surprised since it hadn’t occurred to me but just said, That’s cool. She replied, Then come with me to Peaches. Let me show you my world. We walked a few more blocks and entered a bar with dancing in the back. Women of every description leaned against the bar or one another. A world of sisters, I thought. When a slow dance ended and a jumpier one began Mary and I danced. Aren’t you disgusted to see girls french-kissing each other? she asked. No. She wouldn’t believe me. Aren’t you disgusted?

In order to express oneself genuinely must a woman reinvent language to meet her own needs and subvert hegemony? But what of the alphabet, so polluted: “f” connoting “the f word.”

Hana means flower. She wondered which flower Genji would have had her cultivate and who would have been given the winter gardens? the long months of blue light, braziers and women playing board games—the season of longing? or the season of women loving women?

Another postcard from Maya and Alexis with a Cassatt print of a mother bathing a child in a tub.

The two small sisters had been playing nicely until the mother walked in. My mother. No my mother. The little one threw herself flat on the floor and kicked her feet. The older one clung to the mother’s leg. When the father came home they repeated the ritual with him.

When the babysitter walked in, the children attached themselves to the mother’s legs, her silk skirt crinkled in their fists and became spotted by wet faces as if her absence equalled amputation. They cried hysterically till they heard the elevator take their parents down the shaft into the world. Then the two resumed their own games.

Sarah and I leave a memorial service for a friend who died of AIDS. We go out for a drink before she catches a flight. The whole conversation centers on a sexual harassment case against her neighbor, a “corporate raider.” “When I told him, don’t bother, I’m a lesbian, he redoubled his efforts. It turned him on even more.”

Hana decided the women in Genji must have had active lesbian lives, despite the longing for this or that male lover—after all, the men loved on another. But she couldn’t substantiate her feeling. And it wasn’t that sex was so important—rather, the need to feel desired.

A student interviews me for a school paper. In editing she transforms a comment regarding my numerous relationships to “many different kinds of relationships.”

A card from her sister in Hawaii: wish you were here.

In the several early subtropic hunting and gathering prepatriarchal societies the heart symbolized terror while the intestine symbolized love: the place that dissolves or jumps at the sight or hint of the love object, hetero or homosexual. And while there was little ownership, ornaments were bequeathed matrilineally. Even male ornaments.

When I told Sarah about “the aching fingers” she replied,well, men have fingers last time I looked though they may not know how to use them.

When assigned a personal essay an Asian American woman asked, “How do we know we can trust you?”

Reading over new students’ work I still assume the lover to be of the opposite sex, acculturation so fragile. So insistent. 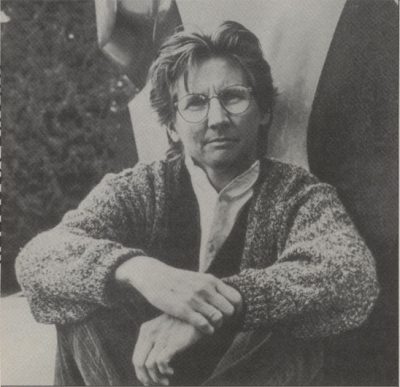 The characters in Rebecca Brown’s eloquent short story collection What Keeps Me Here(Harper Collins) are predominantly women—women who are strong, who love each other, who make art, and who wait in silent rooms for their lives to change.