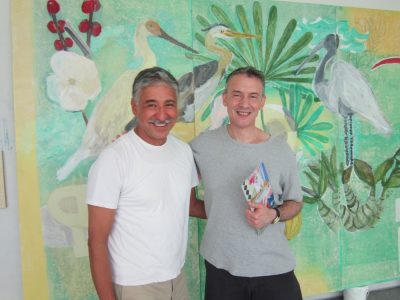 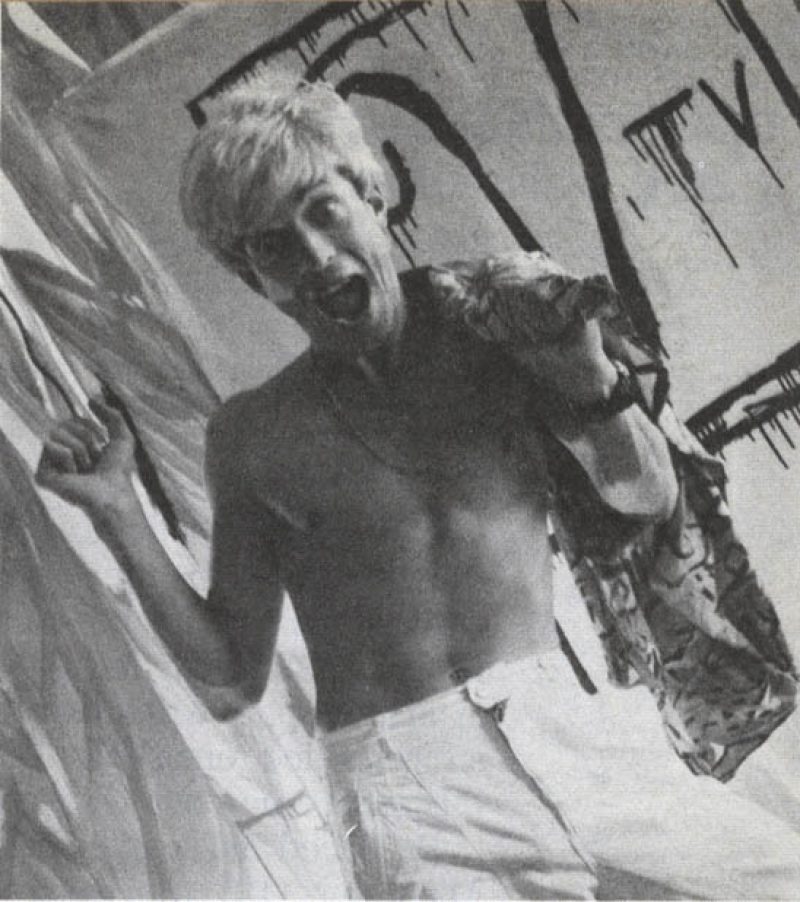 Craig ushers us into his living color V-TV studio (Varla TV) like Mary Tyler Moore on the Dick Van Dyke show. Roberto and Craig sit opposite each other in a set of ’60s chairs probably found in an abandoned hotel room or on the street somewhere in South Beach where the junking’s still good. Behind them are paintings of South Beach: a flip do Thai girl portrait, a self-portrait, towering rough carved wood totems (two naked men, one blond woman). Roberto, in dark sunglasses, hands Craig a cafe con leche in a styrofoam cup from the Cubaneteria on the corner. Craig sips it as if it were champagne, crosses his legs, and keeps on talking, arms flying.

Craig Coleman The thing with doing drag is it has become high-style cabaret instead of gay bar entertainment. It’s a whole different thing. I was at Semper’s last night in karaoke and I was wearing a black wig and a black cocktail dress. Everybody said, “Tap dancing … tap dancing.” Channel 10 was there with all these lights, everyone was driving me nuts, I was a nervous wreck. Anyway, I got up there and did this song and they went nuts! Before I even got up there, they were going, “VAR-LA, VAR-LA, VAR-LA!” Straight couples, too. While I’m doing my song, the girls were getting up and lifting my dress. So I said, “Are the little ladies getting jealous of Varla this evening?”

I got together with Mark Holtz from Flashdance, that little ’50s shop. He was coming to my shows at Torpedo, so he wanted to do video, and we ended up doing a half-hour film called, Gigantic Bitch. I made a little miniature South Beach that I stomped on. So now we’re working on V-TV, which is the Varla Cable Network, like Varla products. (laughter) It has shows, like Miss Roger’s Neighborhood, where I talk to kids in the audience, “You have to get prettier, children …”

CC It’s really sick. Then it shifts to a commercial. We did 976-VARLA. There’s one for Varla’s confessions. It shows me with a close-up of the mouth: “Know that coke you couldn’t find yesterday? Well, I did! (laughter) This guy came over to my house, I took $20 out of his wallet, then made him leave.” (laughter)

RJ Do you think this character, Varla, would have come out if you were still living in New York?

CC It would have been harder because there’s such a fierce pecking order with drag queens in New York. It’s a social status that starts at the Pyramid, the Boy Bar—it’s much tougher there—Varla is like Miss Miami, right?

CC That’s the whole thing. I got a huge percentage of people who know me in this small area where in New York, it’s so big.

RJ What about the relationship between your persona, Varla, and your painting, your artwork?

CC Look at these paintings from last season, they all have go-go girls. I started Studio A-Go-Go when I first got here two years ago. The funny thing was I was doing all these images, the real go-go stuff, and then I became one. That’s what Varla is, living the painting.

RJ What drew me in as one of your biggest fans was that you had a way of bringing real information into a cabaret scene or a bar where usually people are just drinking and escaping to the rhythm of a disco beat. All of a sudden, there was this character onstage screaming about the war, screaming about things that were really happening: being depressed on New Year’s Eve or Christmas because as a gay man you hated Christmas ’cause you didn’t fit into what was traditional family …

CC I didn’t get the Barbies I wanted …

RJ You were having fun, but at the same time you were dealing with a lot of real issues. It was high comedy.

CC That’s true, that’s definitely what makes it funny. Varla is a real person. Most drag queens in New York are just lip-synching …

RJ John Kelly wasn’t. He was an incredible performer.

CC He wasn’t doing what I was doing in 1982–83 at the Pyramid. He was painting, then he was a drag queen, like “How do I fit in?” You just create your whole world as an artist. It’s a great thing to do. You have your John Kelly world, you have Varla world, Varla TV … It’s like your own reality. Especially if you do drag, you can understand both sexes, you can really swing with it so far.

RJ Do you think the audience that you have here in Miami, your big fans, appreciate what you’re trying to do?

CC Oh yeah! I read my horoscope yesterday and it said, “Public interest is growing.” They say hi to me and I wouldn’t recognize them, but they know Varla.

Cyn Zarco So how do you support your lifestyle?

CC Between doing shows and selling art I seem to be making it. 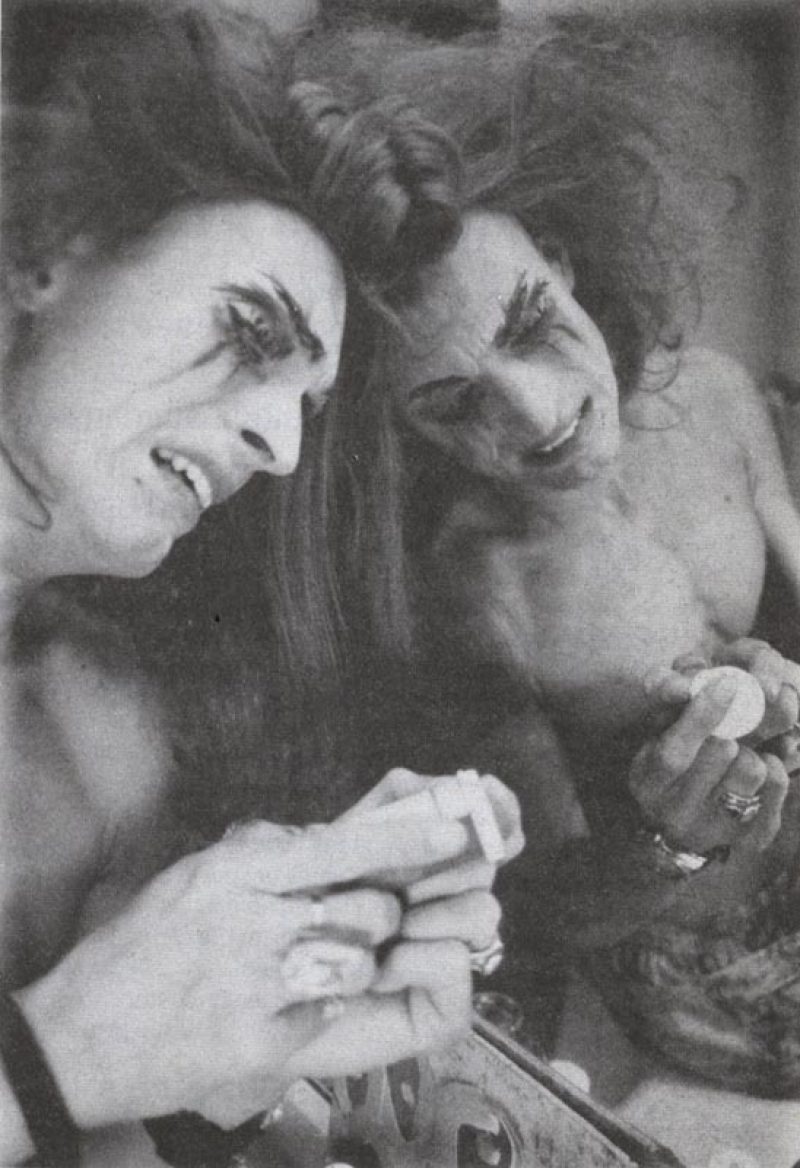 RJ (snaps fingers doo-wop like the Temptations) … I’m making it!

CC Varla started on Halloween when I did The History of Gay Sex show at Torpedo and then I did Pat Field’s. She sent me a dozen wigs from her store, that’s when it really started. And when I started doing Varla, it never stopped, and Varla totally wrecked me. She’d like—I’d go out in drag and come home and get a hundred dollars under my mattress that was for the phone and go drinking! She was such a wild one, she’d bring ten people home and buy them booze and stuff. So for the first two weeks I was doing Varla, I had no money. So, I said if this is what happens, I’m going to make her pay for it. I decided I was going to do some shows and get my money out of this bitch!

RJ Are you channeling? Is that what’s happening?

CC It must be. It’s two different people.

RJ She possesses your body?

CC It’s really amazing to me to find out such a strong variation of my own personality this late in my life—I’m 30-years-old and then I discover this whole other world. People treat me like a real person. I get taken to dinner …

CZ Because you’re dressed as a girl?

CC No, it’s the personality, the show biz thing …

RJ I like her. I like you fine, but she’s fabulous! She’s fun, she’s very fast, she’s bad. She can get away with things a man could never get away with.

CC She hits something with everybody, the dykes …

CC I have all these little queens following me: “Oh, Varla, what should I wear to the next Suzanne Bartsch party?” I should show you some of my fan letters, they’re really sick. (starts digging through Varla’s closet) I can’t find those damn fan letters! They’re so funny, too. They’re basically really sad, “Oh, Varla, I wish I could be like you. My husband keeps me locked up.”

CC I don’t know who they’re from.

RJ Does Varla have a boyfriend?

CC No, we haven’t introduced that character to V-TV yet. We think it could be like a seven-foot black guy named Spanky who treats her like real shit, and I cry.

RJ Why is their relationship so bad?

RJ Do you think about gender identification or gender issues?

CC Of course, that’s what it’s all about. Varla’s like women’s lib, portraying a really strong female character.

RJ Well, Varla’s got a lot of anger for good reason, from what I’ve seen in the shows, her anger is pure.

CC That’s the whole point. You get really pretty and then you start screaming and you’re mad. Women aren’t supposed to yell or get angry and that’s what’s funny. If you see a woman really mad, it’s funny. Maybe not your wife if she’s screaming for her life, but women get knocked around all the time. They always have. That’s what I’ve heard from girls: “Oh God, I wish I could get up on stage and scream like that, ‘Fuck this and fuck you’ and just do it instead of trying to be, y’know, just nice.”