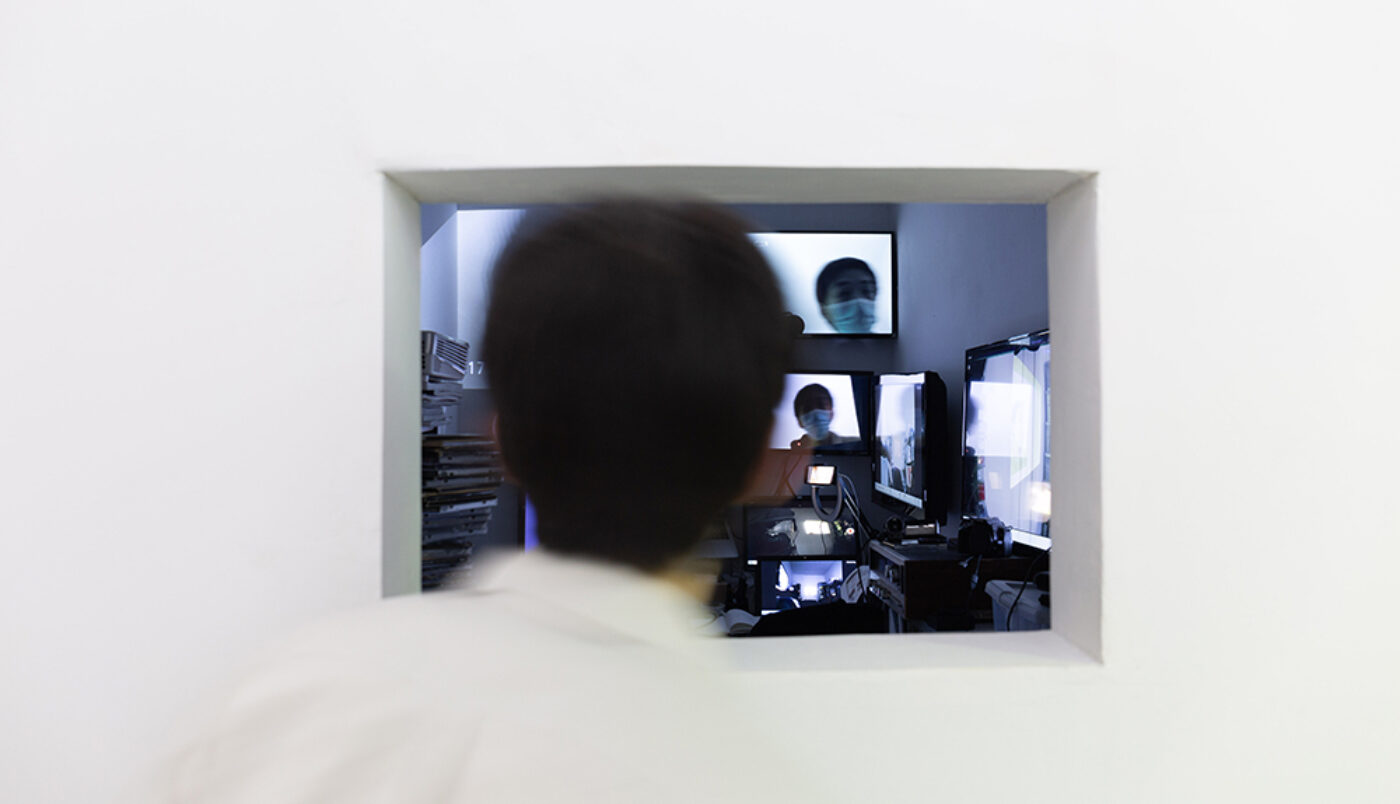 Alexander Si’s work is a dark, philosophical labyrinth. Visitors to his studio will encounter Silicon Valley–smooth boxes in the fashion of Matryoshka dolls. They will peer through a cutout in a white wall to find their faces replicated twentyfold in an obsessive cavern of screens and cameras. Si is hyperaware of how little his experience of reality reminds him of his perception of reality; he is past the point of being shocked by the surveillance state; and he pushes me to confront that technological singularity is already the fabrication of our world. The artist proposes that those of us born into the world of modern technology have dual senses of incurable panic and apathy. One of his tasks is to shine a new kind of light from within the unvisited, interior side of the screen.

Si is a multidisciplinary artist, curator, and publisher, and is also the founder and director of 24EBroadway, a project space in Chinatown dedicated to producing socially relevant and curatorial and editorial contents.

Naomi Falk Anyone who is familiar with your work is aware of its consideration of, as you say in your artist’s statement, the “post-internet age.” What will happen to the individual’s social media presence in the next twenty years?

Alexander Si “Post-internet” is the age we’re living in when communicational and informational technology has been deeply embedded in the fabrics of our lives. It’s difficult to predict. One thing the pandemic has taught me is that anything could happen. But retrospectively, our relationship with tech and media has always been a nomadic one. From books, TVs, to phones, we go through the cycle of invention, indulgence, excess, and eventually the exodus from one medium to the next.

NF The comparison to migration is interesting. How do you think the shifting attention from one platform and constantly changing interfaces is affecting your memory?

AS It’s tremendously taxing on the user. Newness always feels great for the first fifteen minutes. You log in to a new app like unboxing a new product with an excitement mixed with the glowing promises made by the companies and heard from other users. But everything comes with a price, whether it’s sacrificing personal data or behavioral tracking, the implications of which only kick in later, as the luster of the “new” fades out.

I truly hope we can somehow break the cycle. Is it possible? History proves this unlikely. But I’m hopeful. That’s why I make my work: to unnerve and try to prompt my audience to question that relationship.

NF Being asked or forced to share my data online has become almost banal, only because of how frequently I must oblige in order to participate. Your work—specifically Exposure (2020) and Rear Window (2021)—triggers thoughts that reengage me with my online experience. What is it inside your head that makes you the most anxious about this “cycle”? What does it look like to begin breaking the cycle?

AS The banality/forced participation is also what I’m most anxious about when engaging with media platforms and technology—the paradox of being chained and tethered to something, yet wanting to get out. It takes an individual tremendous effort to truly unplug, which is practically impossible in an urban setting. We can strive to be more conscious in our media diet and vigilant about our relationship with media technology, especially the promise and hope Silicon Valley bros and girl bosses are selling on a billboard. Always question if they’re serving you, or you’re serving them.

This monster of “surveillance capitalism” is incredibly hard to pinpoint and theorize even by the best in the game, let alone to tame it. It’s constantly shapeshifting under the guise of a better, more effective lifestyle. No one wants to leave “wonderland,” like the classic blue pill versus red pill debate. I’m so glad these “constructed situations” I built at least have the lasting effect on you to question that engagement.

NF Yes, and it is hard to untether big tech’s utopian visions from its relentless greed and exploitation. Talk to me about your—as you’ve just put it—”media diet.” In mechanical terms, how do you think the consumption of certain content changes your artistic output?

AS My media diet is horrible to admit. After deleting Instagram on my phone for the nth time, my time was sucked dry by YouTube and other streaming services. I have the tendency to obsess. So when I’m onto something, it’s like a feeding frenzy. Recently I was rewatching every single interview and movie of Charlotte Gainsbourg like there’s no tomorrow. There’s something about her that at the same time I aspire to and lust for. And last night I dozed off watching a YouTuber roasting fashion brands.

It’s atrocious, I know. I beat myself up when I’m in this “inebriated” state. Shame and guilt are a huge driving force in my personal growth. It’s also the common starting point with all my projects, because it symbolizes our relationship with media technology. We know it’s hurting us, but we still partake, like a form of sadomasochism.

This period of indulgence, or “going under,” is always followed by a more sobering time where each strand of feeling is cross-examined through media theories and my experience working in the industry. I try to restage that experience critically and honestly into each work.

NF I form a similar manic relationship to my social media channels and general “content” intake. As you’re saying, there is always the sense that a spiral into consumption constitutes as field research and is therefore justifiable. What is the initial impulse that is driving you to watch, or to make sense of, unboxing or fashion-roasting videos, since you mention these?

AS The original impulse to watch is always out of curiosity and nosiness, of “let me check out what all the fuss is about.” We’re social animals; you just can’t escape the herd mentality. Once the bait is caught, these contents have a tendency to arouse a cocktail of different emotions in you—jealousy, aspiration, humor, escapism, materialism, etc. And it’s a top-down unilateral transmission in which the content producer is performing for everybody, and the spectator is receiving it in the comfort of their privacy. That adds another layer of complexity, or complacency, to this relationship.

The stimulation overwhelms the modern spectator to the point of confused numbness, of doing something for the sake of doing it. That’s how I felt last night. I didn’t particularly enjoy that roast video; it’s bitter and subjective. But I thought to myself: this guy has made some good content before; maybe in the next minute he’ll be dishing out some dirt about a designer. I know … the lies we make up.

NF I feel that you find the essence of what it is like to be on the receiving end of the internet—as in Unbox’s (2020) suggestion of a never-ending consumer experience via repetition and replication—and there is something about the boiling down of it all that surfaces feelings of embarrassment. I’m interested in how you feel when you watch others engage with your installations. It goes without saying that people react to Rear Window when they see their faces reproduced on dozens of screens.

AS My work is really done after the audience interacts, reacts, and comes up with its own interpretations. Predicting reactions is a huge part of making my installations. I work my way backward to figure out how it should look and function to maximize the chances for that kind of reaction to take place. I use the term “constructed situations” because they are designed to immerse and provoke. When the majority of the audience could get the intended message, my job is done.

But obviously there’ll be different levels of comprehension, generationally, culturally, etc. It’s my job to anticipate responses and expand the meanings and entry points in a work. With Unbox, there are audiences who don’t know what an unboxing video is; but with the aesthetics of the boxes, the surgical knife, and the pace of the video, they still get the consumerism and commodity fetish critique.

I admire how auteurs like Alfred Hitchcock and Satoshi Kon manipulate the audience and attack the validity of what they’ve known. That core-shaking feeling is exactly what I’m after; and in my opinion, the most effective means for art to achieve social relevance is by jolting the spectator out of the comfort of the status quo.

NF As much as I see our lexicon—or vocabulary—steeped in words like “insidious, fetish, obsession, manic, chained,” both our practices try to reach outward to all and for all. I feel a strong pull toward that “insidious” sheen that packages your work, especially because the conversations around your work that ensue feel liberating and elating. You’ve developed an extraordinarily fashionable self-expression.

AS It’s indeed like an exorcism. By remaining faithful and critical to analyzing and restaging these extreme psychological situations, I feel freer from my past. With the relatability part, as I was saying I try my best to make works that can appeal and speak to a general audience by way of layering meanings and hiding bonus stories. With Rear Window, some folks have never watched that Hitchcock film or didn’t notice the reverse peephole. That’s perfectly okay. The takeaway of the project is not necessarily dependent on catching all of it.

I’m of the first generation born into this latest wave of smart technology. That digital nativity has hugely morphed my generation’s perception. I studied architecture and media in undergrad, worked in journalism, fashion photography, and styling. Also my particular, usually darker, interests and reference points fused with my obsessive nature to become this aesthetic. 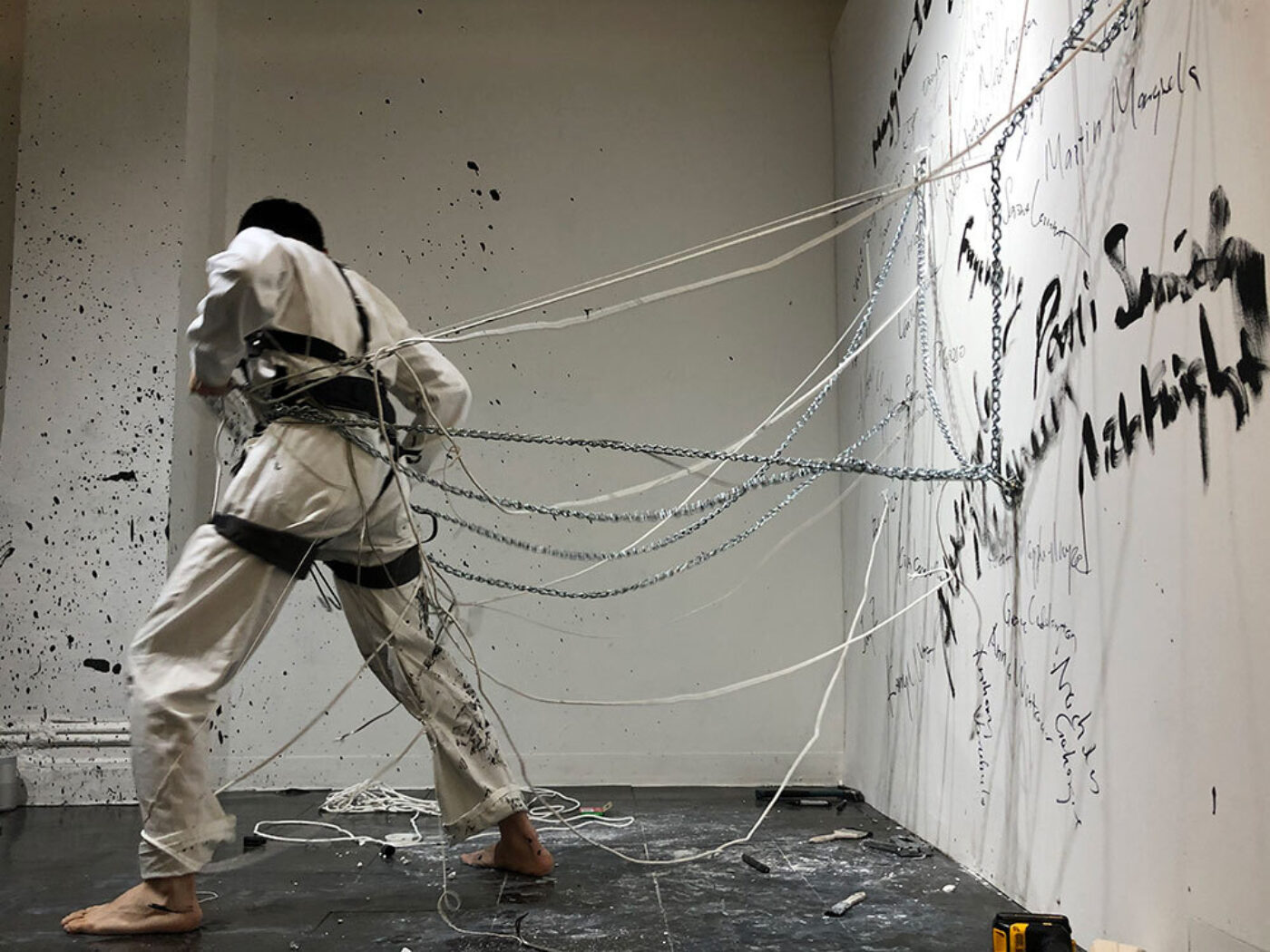 NF I’d like a closing impression. Tell me something that’s been on your mind lately.

AS Been reading a lot about Afrofuturism and Asian futurism, the parallel between the two movements, and what that implies. From Janelle Monáe’s Cindi Mayweather to Lexie Liu’s “Gone Gold,” Jacolby Satterwhite to Andrew Thomas Huang, I’m making hundreds of connections in my head (like what I did physically with Atlas [03102020] [2020]). Stylistically and thematically, the projection and fantasy of a “better world,” a world that we as minorities build for ourselves, is an extremely evocative idea. Tech, just like other systems and frameworks, is biased since it’s still founded and controlled by the mainstream, white corporate world. To reimagine a new prospect is the true rebellion, and we should never be afraid to question and dismantle the status quo. Power is in the slippage.

Alexander Si: Atlas is on view at Tutu Gallery in New York City until June 18.

Naomi Falk is a writer, editor, and book designer who lives in Brooklyn. Her work fixates on art, intimacy, pain, and the ways in which we engage and disconnect our sensory perceptions. She works in the Museum of Modern Art’s Publications Department, is the co-founder of the print magazine NAUSIKÂE NYC, is an editor for Archways Editions, and is also a founding member of HOLE.NYC. She lives in Brooklyn. 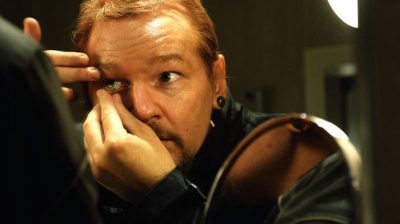