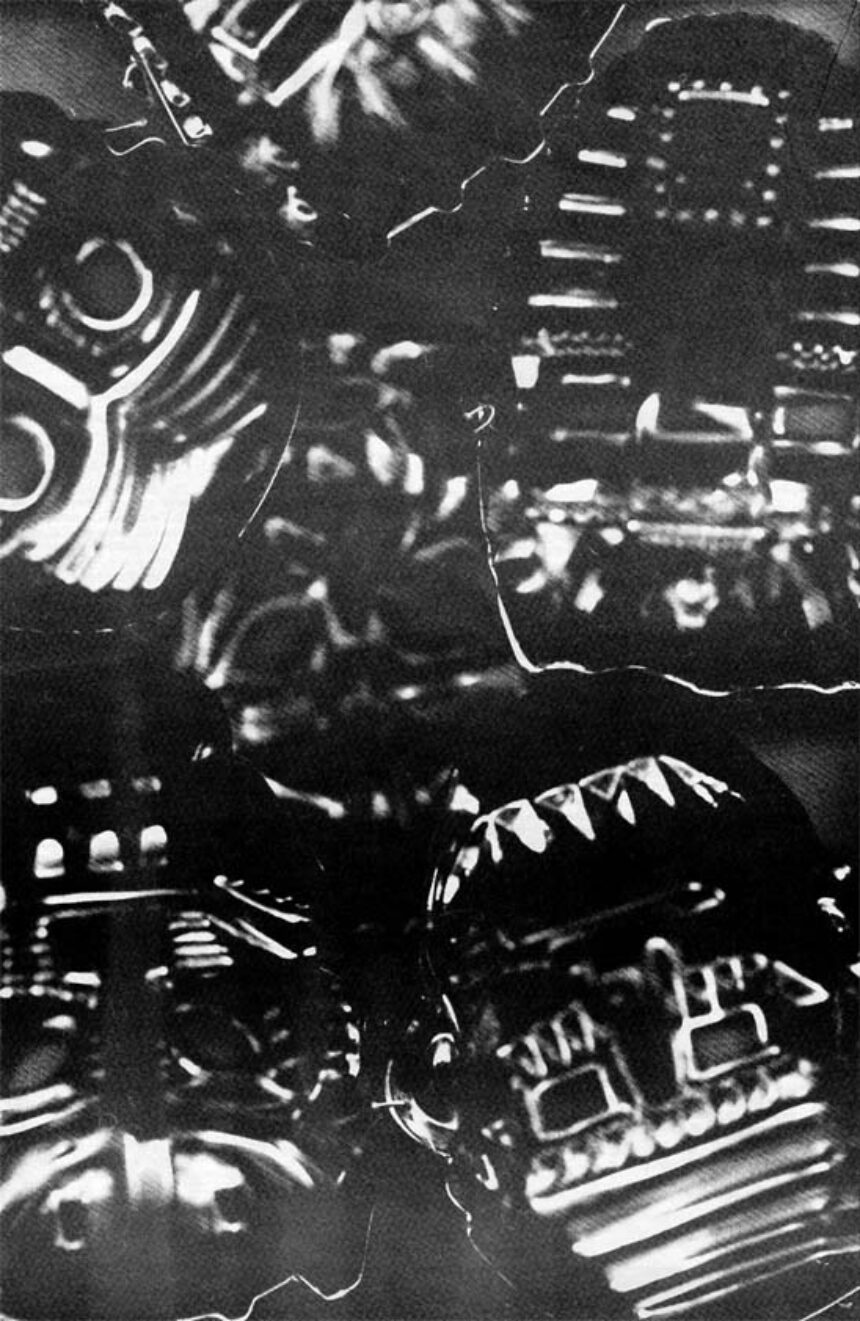 Euler stumbles, lost, somewhere near the headwaters of the Congo. Through the fetid, scorching day he goes dragging his bag of trinkets: oozing candy bars, tin and bead necklaces, yards of ludicrous gingham. He is an outcast, despised and despising. Bad love has driven him into this monstrous world: romance that is sweetly-worded treachery, beauty’s contraptions that are truly intricate torments, refinements of scorn. He has seen their worth! He is down at last to this bag of trinkets, with which to bargain entry into an El Dorado of last resort, a vaguely rumored refuge, a last-ditch Eden for the victimized heart—legendary society of femininity: Congo maidens—untutored, guileless, naive.

But oh, the jungle is an awful place! Sucking bugs the size of rodents whir and thump from the branches; snakes shimmy, enormous, hideous, at his feet; hair-raising yelps erupt from the undergrowth, making him jump and stammer out loud. And always the heat, the fetid perspiration in his eyes, in his rancid clothes, in the bug-swarming air. Always the acrid taste of the hairy roots he subsists on; and for the last few days, the company of a gang of mud-colored apes, bovine-faced, who watch him from a distance, obsequious, idiotic.

They enrage him. He aches to throw a rock at them, to drive them right off the face of the earth, but he dare not, for fear they’ll turn vicious. So he simply hisses at them and staggers into the camouflage of giant tree roots, to confuse them. But always those insipid, yellow eyes and swamp-colored faces reappear around him in the hushes, too stupid to be tricked.

By now Euler has in fact pretty well given up hope. He is preparing to throw himself slowly onto the steaming jungle floor and wait there for decomposition—when the undergrowth parts, and gorgeous women step out.

It is carnal vision: every one of them over six foot, coal-black, their loins wrapped in skimps of leopard skin, their high breasts splashed with blue paints, their exquisite faces surly: bones through flared nostrils, feathers sprouting from piled head-dresses.

Euler is transfixed. He gapes. He gasps. He fumbles in his bag. He brings out a handful of plastic rings.

A marvelous girl—the leader?—steps towards him. The rest close behind her, muttering. Her wrist bangles clatter as she lifts her hand to Euler, then slowly draws it away—then drives it explosively into Euler’s cheek. The jungle erupts with whooping as they leap into the bushes after him and drag him off by his tattered shoe leathers.

He comes back to consciousness in a hut. He is hanging upside-down, among shrunken heads and crocodile jaws. The maidens romp, topsy-turvy to him. Every so often they step over, to punch him in the ribs, to pull his nose, to rake his cheek with a doctored fingernail. He mumbles at them.

Then his bonds are cut. He thuds to the floor. They kick him and gouge him and flail him. Pain swarms over him, out of the ground, out of the air; but it is pain lacy with their gorgeousness. It squires an exotic nature. It becomes delicious to him. Each spasm of torment is like a vial crushed to ooze its honey through his bashed-up veins.

“More … ,” he hears a voice (his own) murmuring, as a lovely pair of knees rams his kidneys. “More … ,” as the edge of a delightful hand cleavers his groin. “More, more … ,” as heels thrash his head, as high-arched feet gavotte savagely on his stomach, as those nails again—contemptuous, blood-hued, filed on the surfaces of rough jewels—run ribbons down his back, as many, many hands drive his face again and again into the mud floor, and strong teeth, somewhere, gnaw achingly at the frail extremity of an ankle.

Then his broken body is lifted and carried out of this exquisite chamber of horrors, outside, into a clearing, where the great cauldron awaits. He splashes in. The fire leaps below, the smoke rises about, mingling with the steam clouds aromatic of previous visitants.

Through the haze he perceives groggily the celebrating giantesses, cavorting in transportations of chthonic revelry. Haze-borne, the notion comes to him that soon he will be no more. Soon he will be nothing but a shrunken head. And this death—or rather, this dying, these last few feet of sinking down into death—strikes him as absolute sweetness. He grins goofily through the smoke and steam at the splendid savage ones. Hot water surrounds him in fiery swaddling. He sways back and forth in his percolating womb, all broken bones and bruises and voluptuousness. He waits for the next celebrant to break from the circling chain, all in one motion to stamp up cuff him a shot to the temple and stamp back into place, whooping, baring her teeth, not missing a step; while he tingles, daffy-headed and poaching. He lingers for that final crippling blow, that ultimate surge of heat, that last spasm like a flicker of soft, electrical pain leaping the gap into a loosened and throbbing death… .

But now something new is happening. The rhythms of the dance are confused by other, guttural exclamations. Chatterings. Shouts, spears, alien shapes. The dance becomes a clamor. The cauldron lurches; he is spilled, singed, protesting, onto the ground. Small hands grapple for him. He is borne off on grey, dwarfish, coarse shoulders.

… . So here at last he finds himself, an invalid in a treetop sanatorium. He lies forever on his pallet, ministered to with unflinching sufferance by his companion, the hairy, dwarfish thing whose school girl crush provoked his abduction from his paradise.

Each morning she bathes his bludgeoned joints with a potion of ferns; each noon she spreads a cool wreath of japonica on the bruises of his forehead. Gently she feeds him the coconut milk, the lumps of retrieved sweets from the bag (masticating them first so his broken jaw can manage). And how he despises her!

“Get away from me—you stupid, hideous, insufferable beast!” he screeches achingly, and she backs away to huddle in a corner, her tiny, dull eyes fixed on him, all bewildered injury and compassion. Her little skull is festooned with a maroon gingham bandanna, her huge monkey-lips are smeared with rouge from that cargo of baubles—her hairy ears barnacled with plastic rings. He sneers at her, he moans in distress as she tries to play the fool for him, as she attempts an appeal to his kindness, to bring off what is of course impossible, that is, to soothe and cheer him.

But forever his thoughts are of his lost paradise. He rolls onto his stomach, his ribs hurting fiercely, no longer the trophies of a savage and delicious violence, but mundanely what they are: fractured hinges, busted bones. He lies there on his stomach, staring out through hot, longing tears at the tangled, humid, leafy world. He strains to find that clearing, that hut, that cauldron, that half-naked society of beauty and harm … Lost dream ! …

Sometimes, at night, he does manage to return… . Sometimes, the ape will try to steal an amorous favor from him in his sleep, and in her eagerness will press too roughly on the dark tracing of an injury. A stab of pain then darts through his sleep: a sudden gorgeous bolt unfurling lust and pain in its flight. Feeling the weight of a body, he will think himself, in his sleep, back among them again… . He feels the heat again; he smells the odor of blood and gamy breath, he feels the pulsing of the tom-toms, the flames are leaping again, from body to splendid body— “Oh more! …” he groans, “oh once more, oh yes, oh sweet God …” He writhes, he twists himself about to catch the doubled fist, the brazen gauntlet … Until the anxious, apologetic gurglings, the pathetic ministrations of concern, the pattings, the little nurse-like strokings, will send a mawkish shudder through his dream. He lurches into sudden wakefulness, sodden, startled, to find himself where he is: up in a tree in the middle of the night, with a moony, bilge-colored ape. And then he moans, hoarsely and utterly, and kicks and elbows her away from him, and rolls over, and gapes desperately into the humid, animate night, in tears, until at last he dozes off again, his painful sleep full of lethargy and desolation.