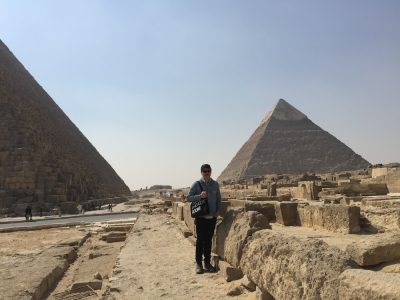 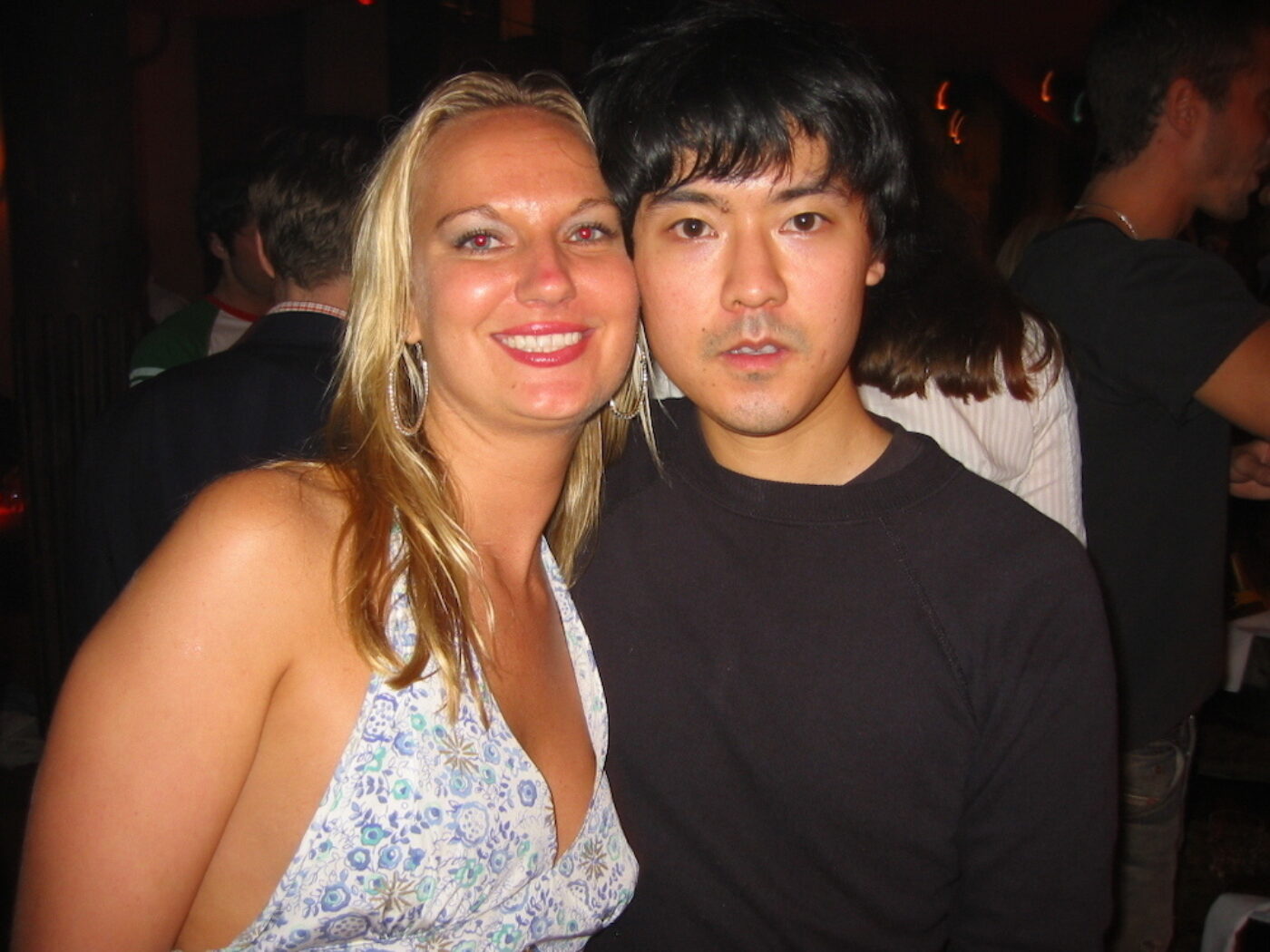 Trevor and Sarah, 2003. Image courtesy of the artist.

Eschewing the margins of popular entertainment for its even clumsier and more dorkish center, Trevor Shimizu has a knack for wandering directly into things: TV anhedonia, the Eurotrash club scene, a Smash Mouth music video, and, perhaps most prolifically, the world of painting. While it’s these paintings that have long garnered attention in gallery shows and art publications, his video work has been no less prolific. Thankfully the New York arts organization Electronic Arts Intermix (EAI) has recently begun distributing Shimizu’s videos so that we might catch a glimpse of the artist’s misadventures. Shimizu and I sat down to catch up and discuss the work, new and old.

C. Spencer YehCongratulations on joining the EAI roster; stepping off the court, what are your thoughts and feelings?

Trevor Shimizu Thanks, Spencer, I’m really happy about it. I’m also glad they let me do an installation in the office instead of giving an artist talk or presenting a screening.

CSYWhat sparked the idea to install within the EAI office itself?

TSThe choices were all site-specific. The viewing room was perfect for my Scientology infomercial video; I shot the music video in the office, so I played it on one of the intern desktops; and there’s a long history of EAI inadvertently greeting people with Bruce Nauman’s or Vito Acconci’s genitals playing on the monitor facing the entrance, so I installed my 840-minute recording of an adult pay-per-view channel on that exact monitor.

CSYIs there a particular frame or platform or exhibition you have in mind when making videos?

TSNo, but if there’s a show I’m working on and a video seems like it’d fit, I use it. I actually don’t like too many people to see my videos right after I make them. I only show them to a couple friends or my wife, Erica. Even with all of those performance videos I made in the ‘90s, only two or three people saw those until decades later. I shared only a couple of videos with my colleagues at EAI in the nine years I worked there. I’ve had a YouTube account for about twelve years, but most of the videos are set to private. I like to see if I still like the videos awhile after I make them.

I should add, I did make a series of videos called Trevor Shimizu Acting Reel (2010). It features excerpts from music videos I acted in. I played a paparazzi in Smash Mouth’s “Then the Morning Comes,” shot in Santa Cruz. I made the reel with the hope of getting more paid acting jobs, so for a piece like that there actually was a platform or frame in mind ahead of time, but that was part of the joke.

CSYI thought it was “All Star” that you made a cameo in. 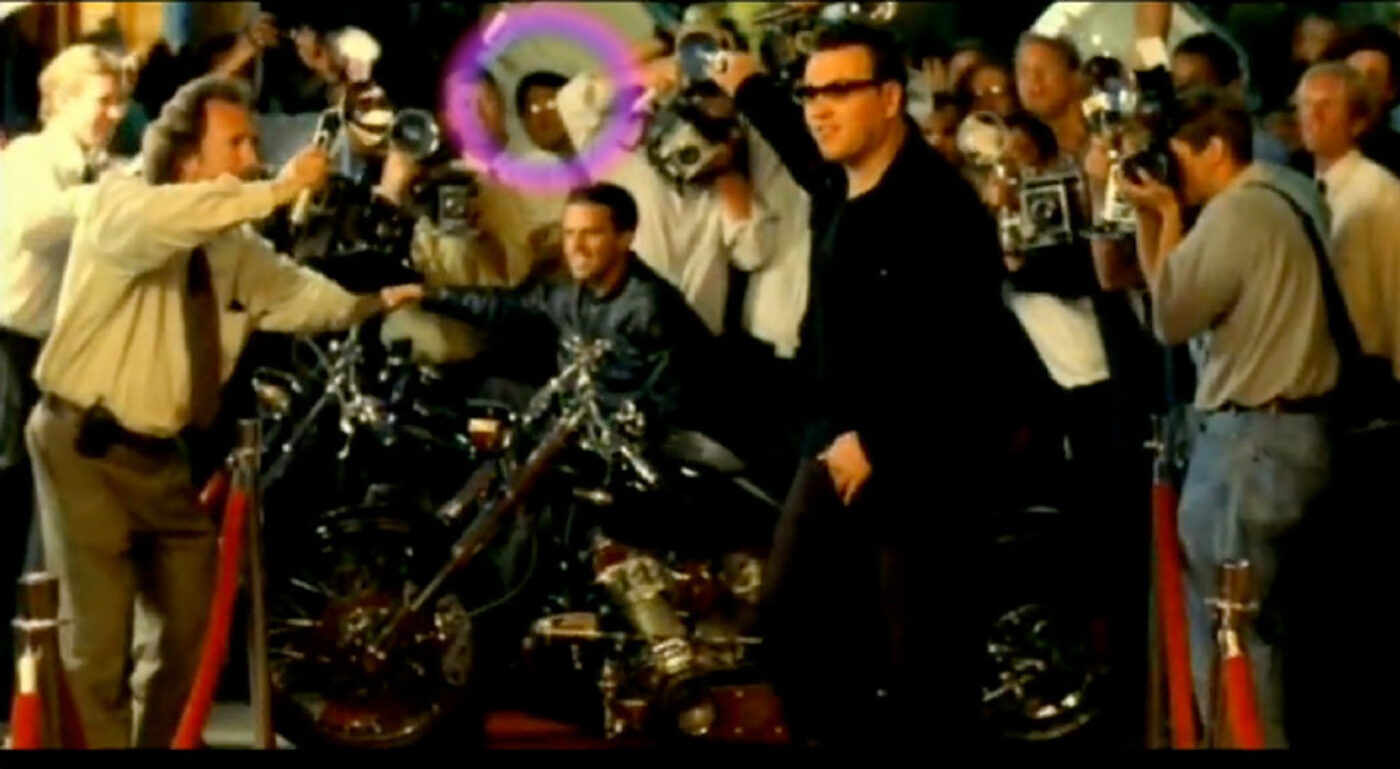 Trevor Shimizu as an extra in Smash Mouth’s “Then the Morning Comes,” Trevor Shimizu Acting Reel, 2010. Image courtesy of the artist.

CSYCompared to your paintings, your videos have a certain hyperrealism. Some of them are shot literally from your perspective.

TSThat’s true, but both the paintings and videos come from the perspective of a character, and I see them as counterpoints to one another. The paintings can be confusing, while the videos are accurate and deadpan. I like both of these qualities. After I made videos like Suffering Thespian and Emotional Month in 1999, I didn’t like the way I looked. I thought I looked fat and didn’t like the sound of my voice, so I stopped performing in front of the camera. I then made a video called The Haunted Affair (2000) using a Mac OS text reader to recite the dialog, shots of my hands, back of my head, torso, and a friend as a stand-in. It was a haunted-mansion story about a man in a turbulent relationship who inherits his wealthy grandfather’s mansion. While throwing a party at the mansion, his wife gets seduced by the grandfather’s ghost. Around that time, I also started painting self-portraits. I liked how I could idealize my image in the paintings, while the videos were unforgiving and caused me too much emotional stress. I was having a lot of romantic troubles at the time, so seeing myself in a video was too depressing. My life was like a John Hughes movie, and I was the Asian character. 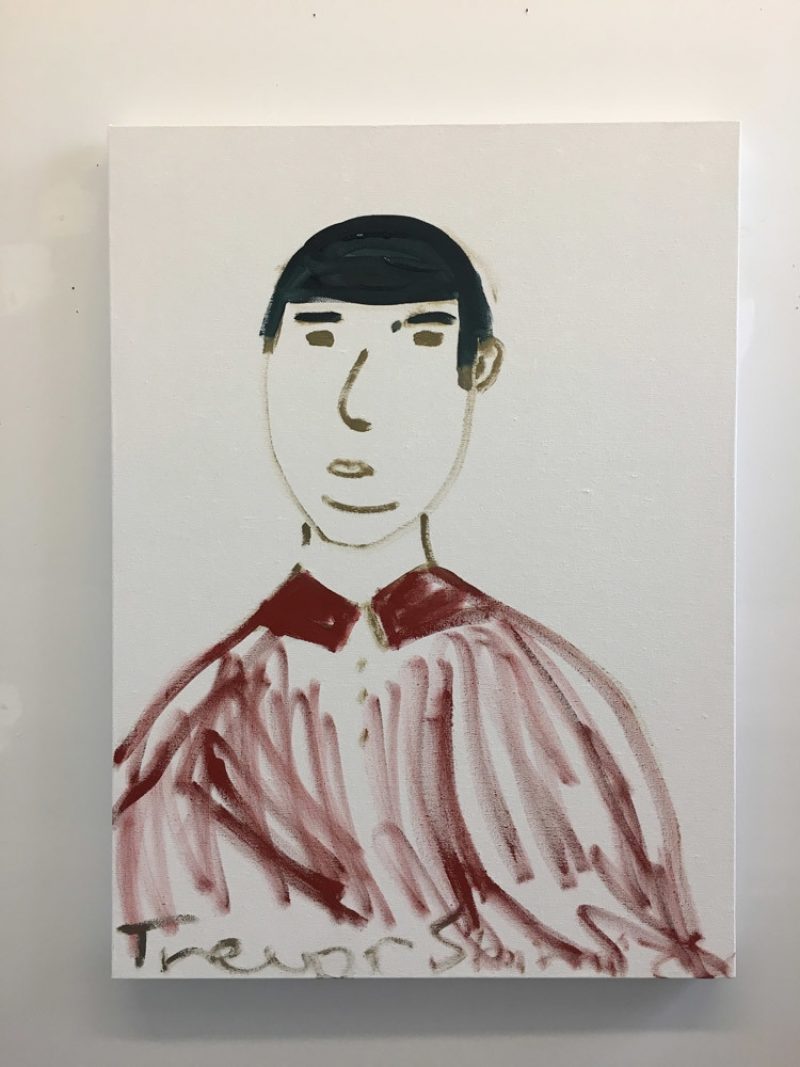 Self Portrait (Round Table Pizza Delivery Driver), oil on canvas, 2018. Image courtesy of the artist.

CSYI remember some Hughes movie with a couple of Asians jumping out of a “supply” closet and yelling “Supplies!” to startle some white people. I thought that was pretty funny. This leaves me with the classic question of one’s identity and how it does or doesn’t figure into one’s work.

TSI never really felt sexually attractive until Crazy Rich Asians (2018) came out this past year. I was haunted by the photographer in Rosemary’s Baby (1968). He had a really bad accent, a funny hairstyle, and funny clothes. His mannerisms were especially awkward as well. I was afraid of becoming that character. Eventually I did become him while in my early twenties when I made most of those videos. I’m still trying not to be like that guy. I guess that’s what gave me the idea to become an actor. I’d like to be a heroic action character in a major motion picture, like Tom Cruise.

CSYI was struck by one of the last slides in CLUB (2002–12) where that dude was making the “chinky eyes” with his hands. It just threw a whole other angle on the video, which otherwise has a fish-out-of-water feeling as you’re exploring this club scene with your lens.

TSThanks, I’m glad it came across like that. That’s what I was hoping for: novelty turns to tragedy. I trace this back to my interest in Shakespeare’s tragicomedies in high school. I went to the Oregon Shakespeare Festival in Ashland twice. I guess hints of Shakespeare come out in my work from time to time. My show at Rowhouse Project in Baltimore in 2015 was said to have a Shakespearean narrative arc. I’m actually trying to revisit Shakespeare right now, but I’m only a few pages into the introduction and can’t seem to find the time to keep reading.

CSYAre you a Shakespeare truther?

TSI can see how it’s hard to believe that a guy from humble origins could be so profound, brilliant, and prolific, but look at me: I’m from a small, rural town, hardly educated, yet I’ve already made about a thousand paintings and drawings, taken about a million photographs, recorded and performed so much music, even wrote some copy, a couple short plays, and a few film treatments. 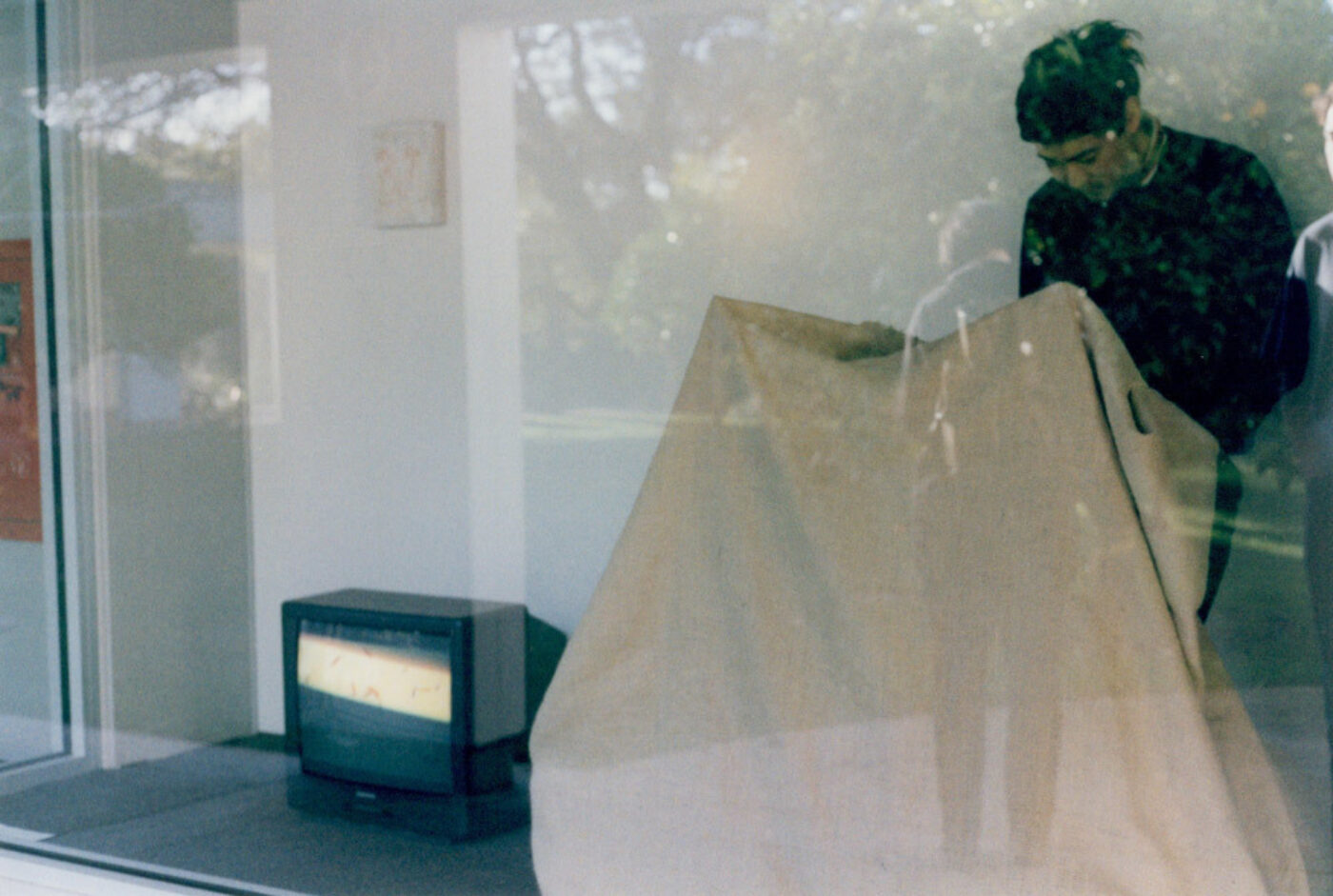 CSYI first knew of you as a member of the band The Curtains, with Greg Saunier and Chris Cohen. Your role was notable in that, according to the credits, you played drum machine.

TSIn 1998, I was failing a course on film noir and did a performance where I lived inside of a burlap bag. The whole time I was producing videos that would play on a TV monitor outside of the bag. I called it Reverse Couch Potato. The burlap sack and the monitor were inside a narrow, glass show window, outside the art studio building. I’d stay inside the burlap sack all day until 10:00 PM, when I would empty the urine I had stored inside a plastic container. It was an homage to Chris Burden and Marina Abramović, who I learned about a few weeks before. This performance led me to failing another course and eventual dropping out of school. I continued to live in Santa Cruz above a coffee shop called Cafe Pergolesi. I quit my job at Round Table Pizza and got a job serving food at a Chinese lunch buffet in Little Shanghai, five blocks from my apartment. For most of 1999, I was a scenester, wannabe, emo musician. I hung around a couple different houses where they had shows every weekend. Chris Cohen lived in one of the houses and played drums in one of my favorite bands at the time, St. Joseph and the Abandoned Food. We didn’t really know each other though. He worked at Streetlight Records and would sometimes be working the used-buyers desk when I went in to sell CDs. We both moved to San Francisco around the same time and ran into each other at Amoeba Records where he worked. The rest is history.

CSYDo you think there’s something in working with sound and music that you can’t find in other mediums?

TSI do, but I only found frustration and disappointment with the medium.

CSYIt seems though that you were very much interested in what was around the medium. The “rock n’ roll” life, if you will. You had mentioned you were a scenester and a club photographer. It was a way of participating in “the life” but mediated by the lens; you never were actually living “the life.” I find parallels between that and the Lonely Loser videos.

TSI realized that I wasn’t cut out for “the life.” I didn’t have the presence and talent. I was an alright backing musician. I didn’t like drugs. The people I looked up to seemed to have some natural ability and confidence I didn’t have. I wanted to be the alpha but wasn’t. That’s why I became an artist. It was something I imagined I could do alone and not care how good I was, how I looked, felt, or behaved while doing it. I realized that I was more a fan or consumer of things like music, movies, and skateboarding. I think skateboarding is one of the most difficult things a person can do. That Lonely Loser skate video came about when I was trying to skate again. I was watching some videos by people twenty years younger than me and basically just felt like a lonely loser who couldn’t skate.

CSYI like how the idea of getting into something in your late thirties or early forties involves having the right gear. I’m thinking about Tom’s Guide, Wirecutter, Gizmodo, Cool Tools.

TSThe gear was essential to the Lonely Loser series. I borrowed my friend’s demo model of Google Glass and wore it around the house. The thing felt ridiculous, but it determined everything I did—how I moved, interacted with my surroundings—and I quickly became addicted to using it to shoot videos. I became the character I was parodying. I became the tech guy, lounging around the house, researching his hobbies on an iPad. I thought it could be a funny fashion accessory and began wearing it outside.

CSYHow did it go wearing the Glass out? Did people make demeaning faces at you with their fingers and eyes?

TSNot at all. I thought it would make a great fashion accessory worn discreetly on the bill of my hat. The look never caught on though, so I guess nobody saw it.

Trevor Shimizu’s work is currently on display at 47 Canal as part of the exhibition Pastoral (Grind and Drone), up through February 24.

C. Spencer Yeh is an interdisciplinary artist, improviser, and composer. Yeh volunteers as a programmer and trailer editor for Spectacle Theater, a microcinema in Brooklyn NY. His video works are distributed by Electronic Arts Intermix. He is also a contributing editor for BOMB and Triple Canopy. 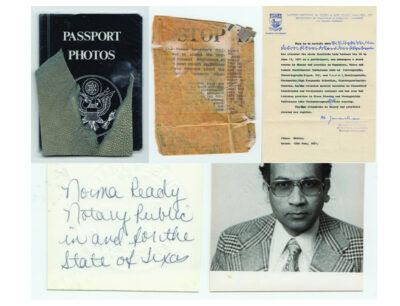 “One actively is olived, one actively becomes a desired color, desired manufactured ethnicity.”