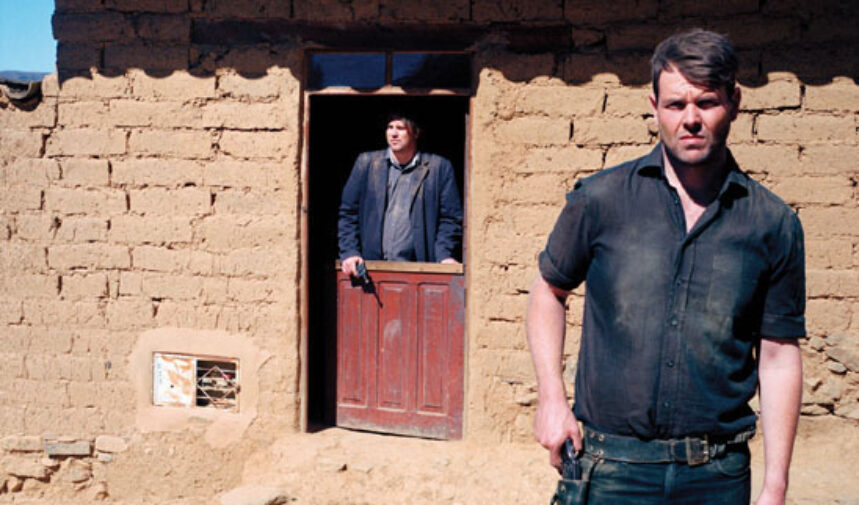 Video still from Round and Round and Consumed by Fire, 2009, color, sound, single-channel video, Blu-ray. Total running time: 8 minutes. All images courtesy of the artist and Thierry Goldberg Projects.

Take 16 minutes to learn something about Bolivian history. Or maybe not. Claudia Joskowicz’s two new video works, shown at Thierry Goldberg Projects, depict historical moments dramatically poised on the brink of a violent eruption. At first glance, the actors we see appear frozen even though they’re alive, as if God (or the artist) has buggered off, time has stopped, and the drama can’t or won’t conclude naturally. In Vallegrande, 1967, we slowly approach a dilapidated shed in a rural setting. A few curious locals have gathered to gawk at a dead body lying inside. Nude and supine, the dead man is watched over by soldiers and an eager photographer, who has climbed on the makeshift bier in order to get a better picture. In Round and Round and Consumed by Fire we are again in a rural village of mud bricks and shingled roofs. Two light-skinned men bearing pistols stand in front of a façade. They stand guard, perfectly still, awaiting the arrival of a band of soldiers who appear in the distance.

The two videos are highly stylized and visually striking. They’re also obscure with regard to the scenes they portray. There’s no commentary, other than what one can glean from the titles—no diegetic sound, other than a minimal musical soundtrack that accompanies both works. Viewing them in succession, I get the creeping feeling of seeing double. The conceit used in both works is identical and the two historical subjects are at risk of losing their autonomy and melding together, becoming frozen and iconic like two sides of a coin. Heads: Che Guevara. Tails: Butch Cassidy. If you’re cynical, you could call it a gimmick. If you’re curious, you need to think a bit more.

And now the disclaimer: I did not see the works properly. Or rather I saw them itinerantly, virtually, on my laptop, while waiting for a connecting flight at London’s Heathrow Airport. Is this important? Is it even worth mentioning? Do we still value seeing an artwork installed in a space when our own spaces have long become transitory and virtual, lacking the permanence—the ground-zero gravitas, if you will—that Joskowicz’s fixation on these two particular moments in space and time seems to imply? 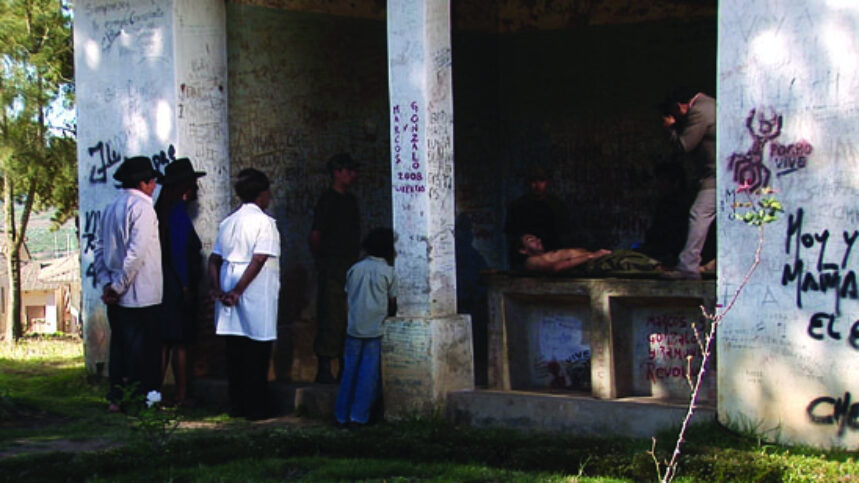 But wait, what are these moments about, actually? Who are these characters? What are these spaces? I could surf over to Wikipedia for a refresher on Che Guevara and Butch Cassidy, but I’d rather not. I’m lazy and jetlagged. I’d rather stay on the surface. What do they share? Well, this much is arguable: both historical figures were itinerants in a preglobalized era. They traveled through borders and cultures in order to escape the law or overthrow it. They dressed up in costumes and assumed identities. They devised a doppelganger in order to survive. Eventually, both met violent deaths in Bolivia. And both have continued to live beyond death as itinerant icons venerated across borders and across time. Keeping this in mind, Joskowicz’s narrative reticence is understandable: these are international celebrities. Exposition is redundant, gratuitous. We know enough to fill in the blanks. And if we don’t, Google will do it for us.

Celebrity and the close-up shot were made for each other. Their shared effect is to trump the background: the former by outshining it, the latter by cropping it out. Joskowicz’s protagonists are indeed bona fide celebrities and the actors portraying them do what celebrities do: they freeze for the camera, ever ready for their close-up. But it never comes. In eight minutes of video we never get that close and as a result a funny thing happens: the background reasserts itself. We start noticing the wind, the power lines, the distant roofs of more modern buildings, a stubborn mule that stares back at the camera. Most of all, we notice the odd movements of the locals hired as extras who are not entirely successful in holding their poses. And while the lead actor portraying the dead Che is appropriately statuesque, his local spectators keep fidgeting, constantly breaking the heroic illusion, until one of them inexplicably leaves. Similarly, in contrast to the American outlaws, the soldiers in Round and Round appear antsy and uncertain. Sure, we know they’re about to bring down two of the most famous criminals in history, but that’s not what we’re shown. Instead, we see an anonymous collection of young men who shamble onto the scene (to do a job) and then pause for a group portrait. Silently, distractedly, apathetically, they blink at the sun. Before the shot ends, one of them even wearily draws down his weapon. In movies, this is the stuff of comedy: the law is amateur and disordered while the outlaw is professional and stately. In life, it’s a whole other story.

I don’t want to impute an easy kind of humanism to a work that is much more ambiguous. But this missing close-up causes our gaze to constantly shift—in my opinion, that’s good. From heroic foreground to an agitated background, from the ideal to the tangible, from the historical to the present. Admittedly, we haven’t learned much about Bolivia. But then again, where have we been looking? 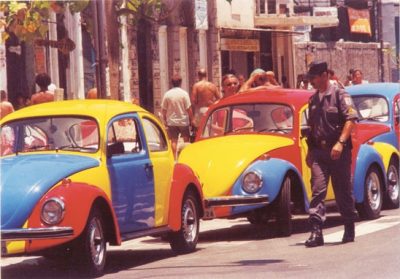 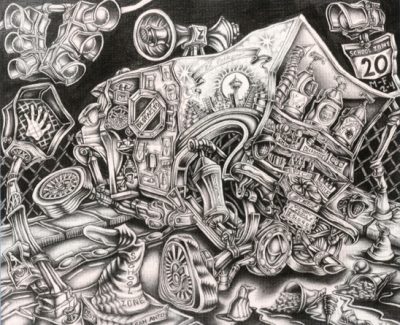 Bill Fitzgibbons gives background information on Alex Rubio, the artist who created the cover image for this issue of BOMB, from Rubio’s upbringing in the San Antonio Barrio to his current pieces.