Anxious landscapes, aberrant allegories, perverse personifications: Chuck Connelly is Norman Rockwell on acid—a maverick narrative painter pushing the limits of myth into a modern malaise all his own. Connelly has worked with Martin Scorcese on New York Stories and is currently showing with Lennon Weinberg Gallery. I talked to Chuck in his paint-drenched studio on East Second Street, where he spoke with his usual fiery candor and irreverence. 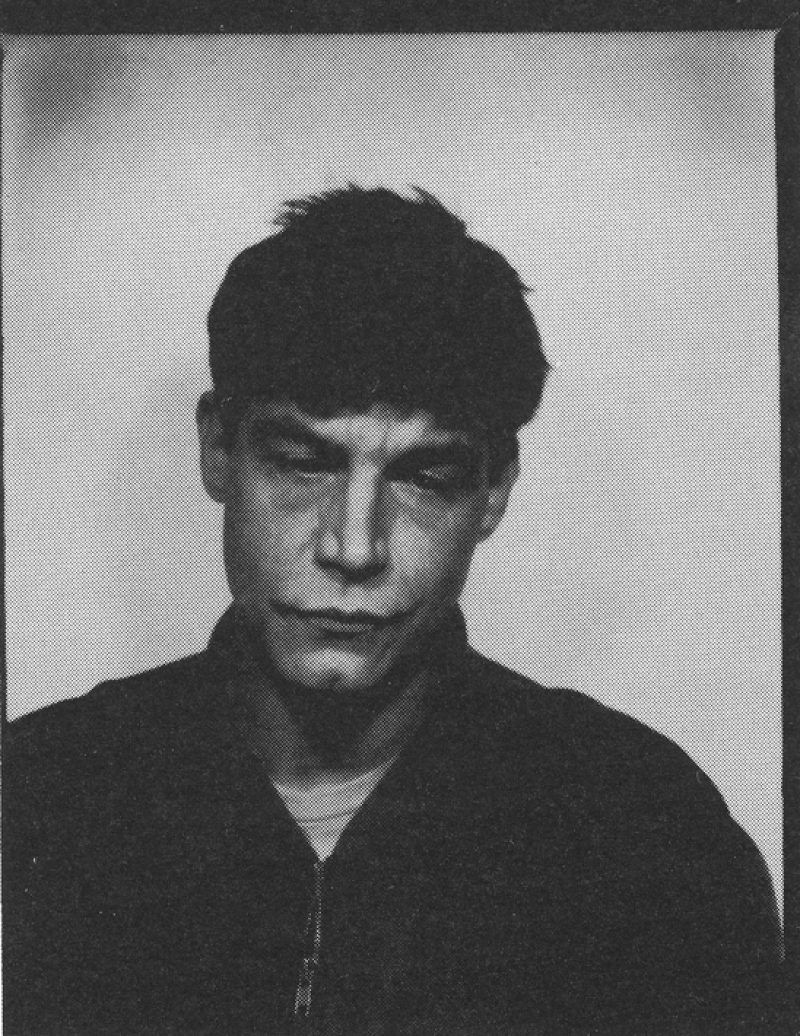 Chuck Connelly, Autoportrait from the photobooth at Little Ricky’s, 1991. 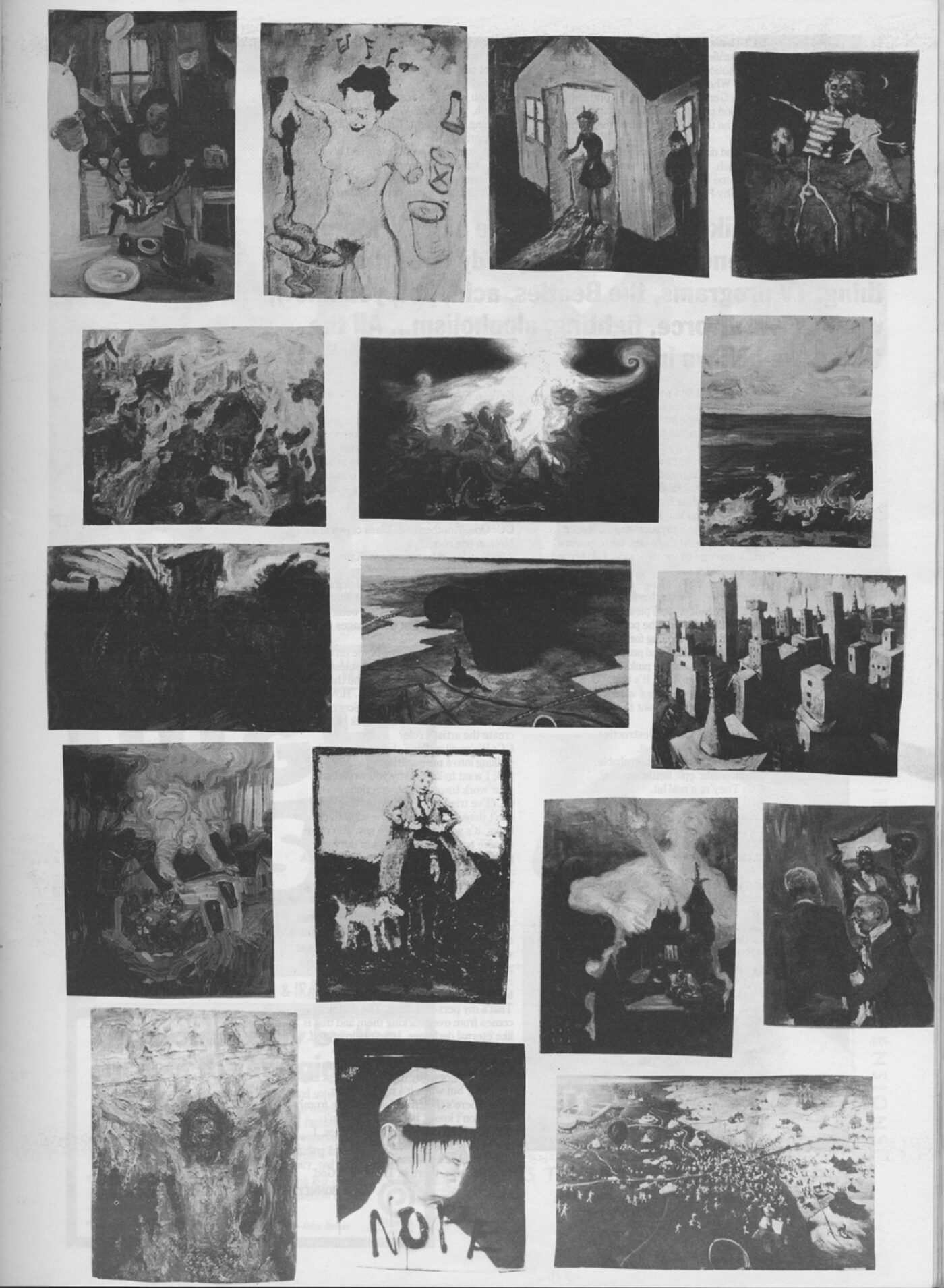 Anne Bonney Your work is very dramatic and narrative, you create your own psychological community. In the earliest paintings, you actually had an alter ego, Fred Skaboda. Where did he come from?

Chuck Connelly An acid trip through a tunnel. Thank you.

AB The name or personality?

CC The thought came to me through an acid trip, and the name came from a high school thing I used to do with my friend: We invented a language and a family, Bernice and Fred Skaboda.

AB You invented a language?

CC Well, it was kind of a “boda oda odda odie …” Thanks again, for bringing this up.

AB You also had a symbol for your own identity.

CC I didn’t know that at the time. (laughter)

AB Where did that come from?

CC I don’t know, perfection? The idea of simplicity? I wanted to do the dot theory of advertising and Fred Skaboda would be media man. You could hide him in a room and invent his life. And he would endorse products. And these products would all have the black dot on them: a car, toothpaste, underwear, socks, a boat, whatever—and it would all pull together into an aesthetic. I submitted that thought to an advertising relative in my family and he wrote back a letter, “Sorry you have these silly, infantile, adolescent thoughts about advertising… .” Later, Beatrice Food and all these other corporations blended together into a conglomerate—so I was right. I knew I was right.

AB You have a very ironic running commentary on the culture. You depict normal, banal people in service: milkmen, messenger boys, flower deliverers—these functionaries of society, simple people performing simple tasks that make life normal. Except that they’re all depicted as demons.

AB What are you thinking about when you create those characters?

CC It’s like adding something to normality, a twist to the vision that’s not quite normal. Usually, in reality, people look like that, don’t they? I mean, take a good look at your mailman next time he’s delivering, ask him questions. The one I have doesn’t even speak English. What’re you talking about, normal? 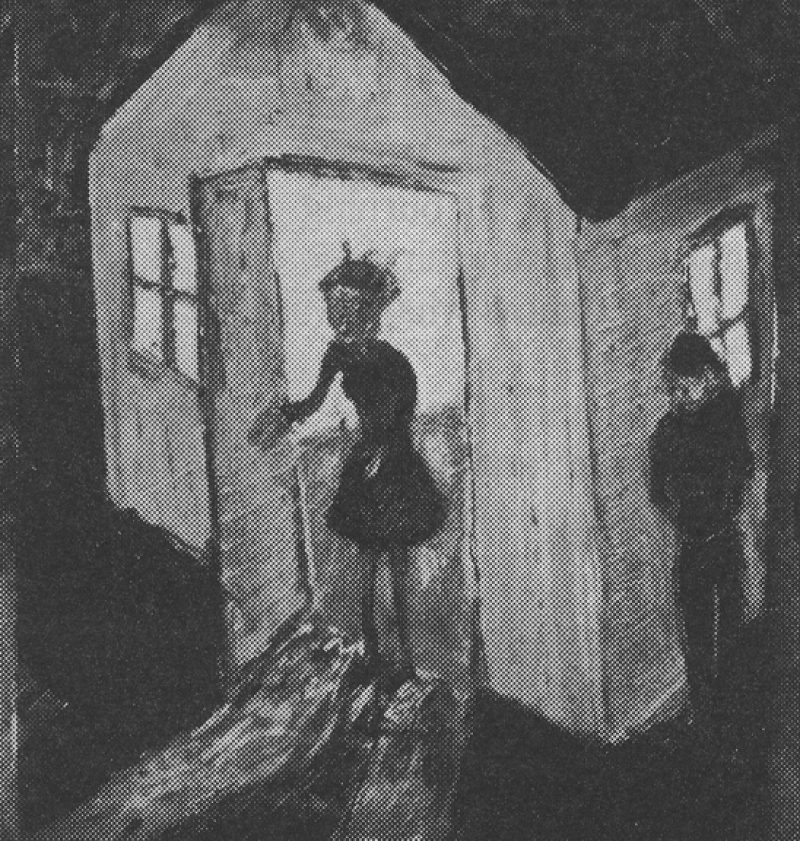 AB That’s my next question, what’re you talking about, normal?

CC We used to think we had a normal society. I come from normal, I should know.

AB What is normal?

CC Isn’t it like they told us: apple pie, TV, Mom, dog, picket fence, school? Everybody does the same thing: TV programs, the Beatles, acid, pot, you know, whatever—divorce, fighting, alcoholism … All the things we believe in.

AB (laughter) You move from conditional, normal patterns of growing up to lost innocence. There’s a playful, childlike beauty to the way in which the paint is handled. It’s free and expressive. But what you’re actually saying is that this dark underground world is what happens to that innocence. They’re disturbing. Do they parallel your own life?

CC Sometimes I use a real event. And other times I don’t know where it comes from. The mailman, for instance, you see him everywhere you go, and the dog’s always biting at his foot. It’s tapping into what we’re supposed to know.

AB In a way, you’re speaking from the unconscious of TV.

AB There is a strange, almost reactionary, patriotic flavor to your work.

CC Should I be offended?

CC Earlier on I didn’t think of America like I do now. I was cynical. Now I think it would be great to help America.

AB I was trying to look at what unified your vision, your characters seem demented or wounded, humiliated. And I’m not sure of the morality, but it seems the consciousness you’re alluding to is shame. You’ve shown Santa with the word “Homo” painted on it, Mom with three sets of eyes—there are crashes, accidents, a lot of falling. Even in the biblical subjects you choose, the fall of Adam and Eve.

CC I guess it’s personal shame. I think everyone is personally ashamed. It’s the shame of man.

AB What’s your definition of shame?

AB It’s a social condition. You don’t experience shame alone, somebody has to clue you in. Are you aware that a lot of the subjects you choose pertain to this?

AB There’s a Teutonic influence. You spent some time in Germany.

CC Oh, that got in there. That sure fits in.

AB The Germans’s doppelganger is the shadow self, a ghostly personality. Some people see it as one’s dark side. I see it in your self-portraits, your choice of a John Gacey type: the artist, clown, mass murderer. There’s a certain quota of sociopaths you select as subjects.

AB (laughter) Good, tell me about it.

CC That’s the earlier work. My work’s been purified!

AB I noticed that there’s a lot of fire and water. When did the fire come into it?

CC In Germany, I did that big burning transition painting and burning airplanes, but at the time, I didn’t know what I was doing.

AB And didn’t you do one of Icarus?

CC Yeah, that was later, and before I left, I had done Prometheus.

CC I painted him with a bird coming down and pecking out his heart.

CC Well, it should be his heart. 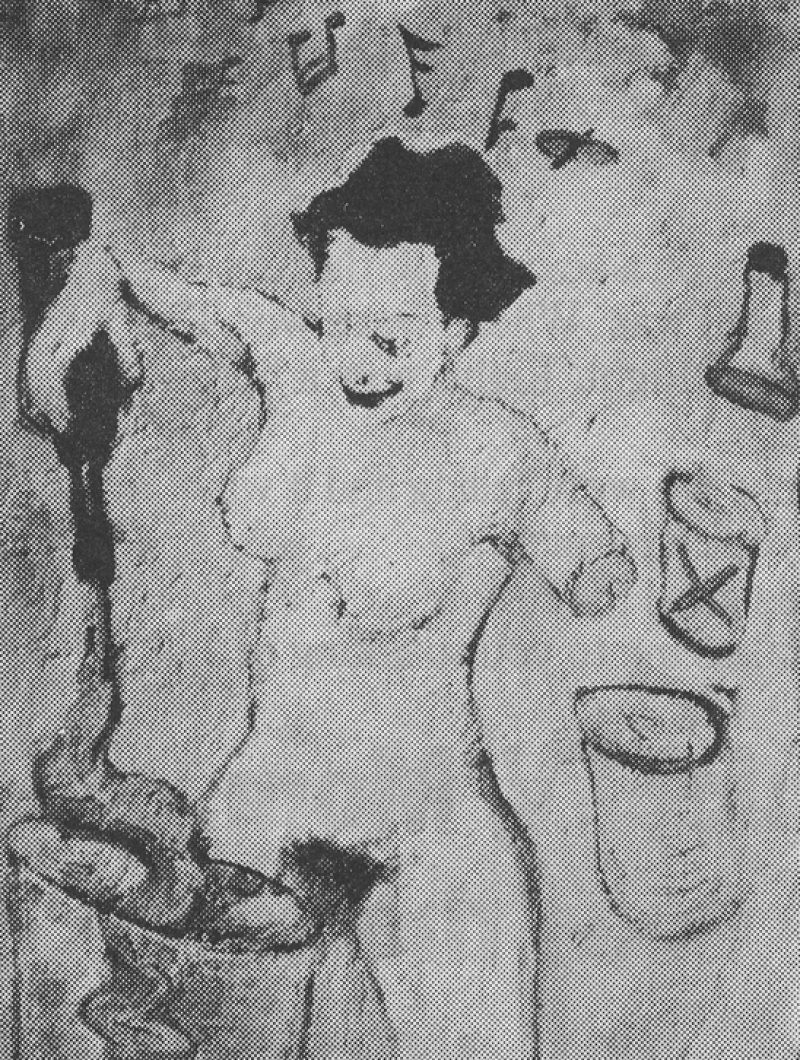 AB I would say you’re inspired by certain subjects of Rembrandt and Gericault. Have they influenced you?

CC Well, Rembrandt more so than Gericault. Joshua Reynolds, don’t ever forget him, and Van Dyck, and Rubens. Rembrandt has a mystical depth, Ryder too, of course. Rubens’ are more sensual. They don’t go to the dark side. I do favor the dark side.

AB Occasionally, I’ll see some pleasure in your work, the actual loading of the paint creates sensuality and pleasure.

CC I’ll keep loading the paint on there, looking for this, looking for that, painting it red and green, blue and purple, yellow, orange, pretty colors, pinks—but then invariably, I’ll go dark. It’s that, Okay, everything’s perfect, but what’s missing? And it’s the feeling I want to carry on. So I go deep again.

CC But I’m fighting that.

AB What about your improbable, anachronistic epic battle scenes?

AB I don’t see too many people painting …

CC … because they don’t sell.

AB (laughter) No? Is your work ever altered because of the marketplace?

CC I used to have paintings with my phone number on them. What do you think?

CC I’m often in black moods and tortured by the marketplace.

AB Chuck, you’ve always made a living as a painter.

CC I still have a bad attitude. Had it since I was a kid. Always on my little report card, “bad attitude.”

AB You were elected the class clown, right?

AB Humor is a tolerable form of rebellion.

CC Not the way I used it.

AB Let’s go back to the falling that takes place in your work. Is it defying death?

CC It’s obviously sexual. I bet when you’re having sex it’s like falling. I’ll bet, I wouldn’t know. How would I know? The work started out sexually-charged. I didn’t know it. I’d say, “Why do you think this painting is weird?” You know, a guy on his knees with a dog, and a woman beating him or whatever. I didn’t consider it weird at the time. I’d think, “Oh, it’s modern. It’s got sex, that’s cool.” (Silence)

AB You were on a sexual roll, there.

CC Oh, yes. I was. Where were we? The fire thing, sex. Right. Right, now it burns so brightly.

AB Actually, we were falling and it was fun, but if you’re burning …

CC Sounds good to me.

AB It all takes me to your painting of Icarus and Lockerbie, the metaphors of crash and burn and vice versa.

CC Wouldn’t that be the way it works? You’re all burning up and then you get what you want, but all you do is fall down. It always has to stop and it has to stop for some people pretty hard. Next question, please. I like the idea of disaster—natural phenomenon. 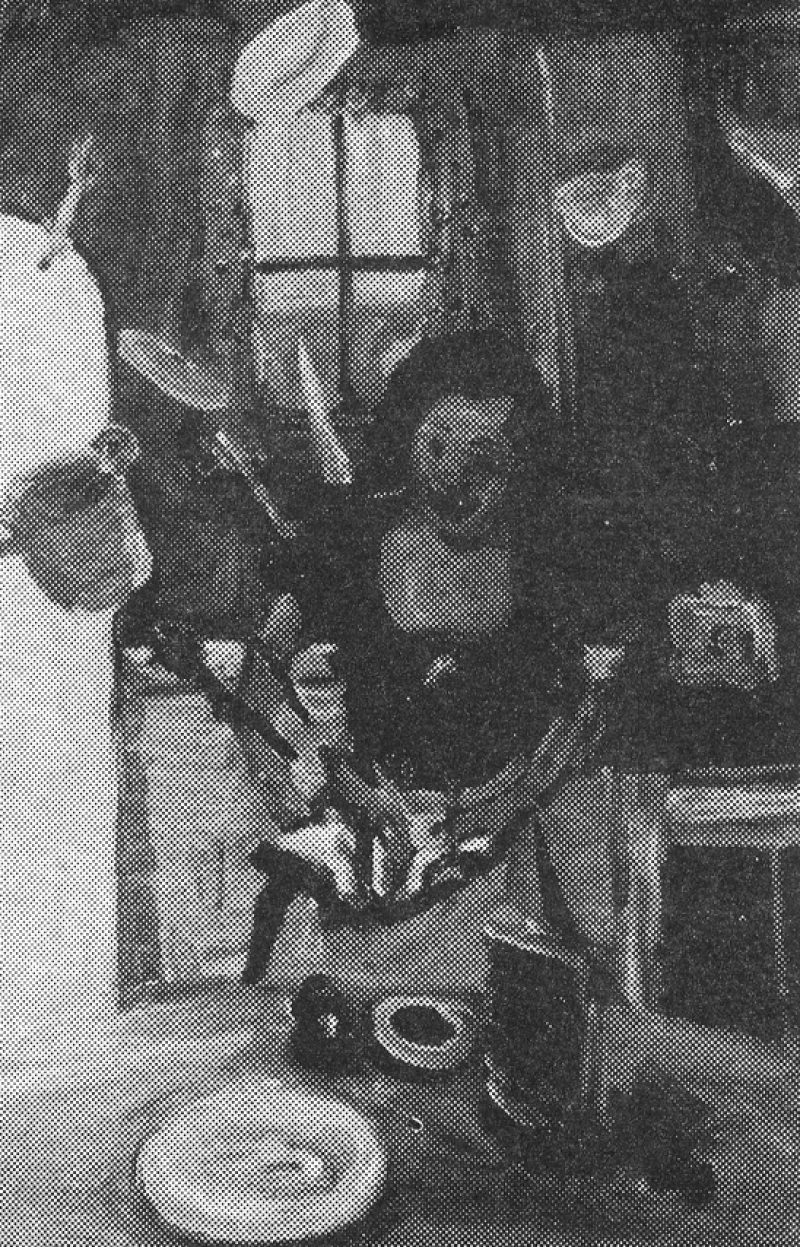 CC Ooo. Another one. Class clown and Mom in one room.

AB You depict her mostly as Kali mommy. Is she your real mother?

CC I guess, basically. If it says “mother,” I would hope so. My mom’s just like everybody else’s, the girl I left behind.

AB Where do the lost child images come from?

CC From Mom not being home on time.

AB I thought it was more about lost innocence—you mythologize and then demythologize your characters. How did it feel to create the paintings for Scorcese’s New York Stories and watch Nick Nolte create the artist’s role?

CC We’re all walking cliches. It was like walking into a premonition.

AB I want to know why you won’t push your work toward an abstraction.

CC I’ve tried it. I don’t like what I see. I don’t think vision is just how something looks, it’s what you have to say. You’re in service to the people. It’s your duty to teach them something besides how to look at objects and meditate on their Karma. You have to plug memory buttons so they remember to say, “Hey, this is what it is. Remember this? Do you remember that we all remember that? And do you know that maybe we have things in common with each other?” There’s lots of abstract painting out there but I don’t feel I’m the right guy for it. I like the idea of one guy building real ideals of everybody’s ideals. That’s my personal thing. The darkness comes from overworking them and that is like eternal darkness. I can’t help myself. I can’t help overworking it. But when they’re fresh and ripe there’s nothing better. I’m not a guy that’ll just accept any old thing, but when it’s right, I like it. 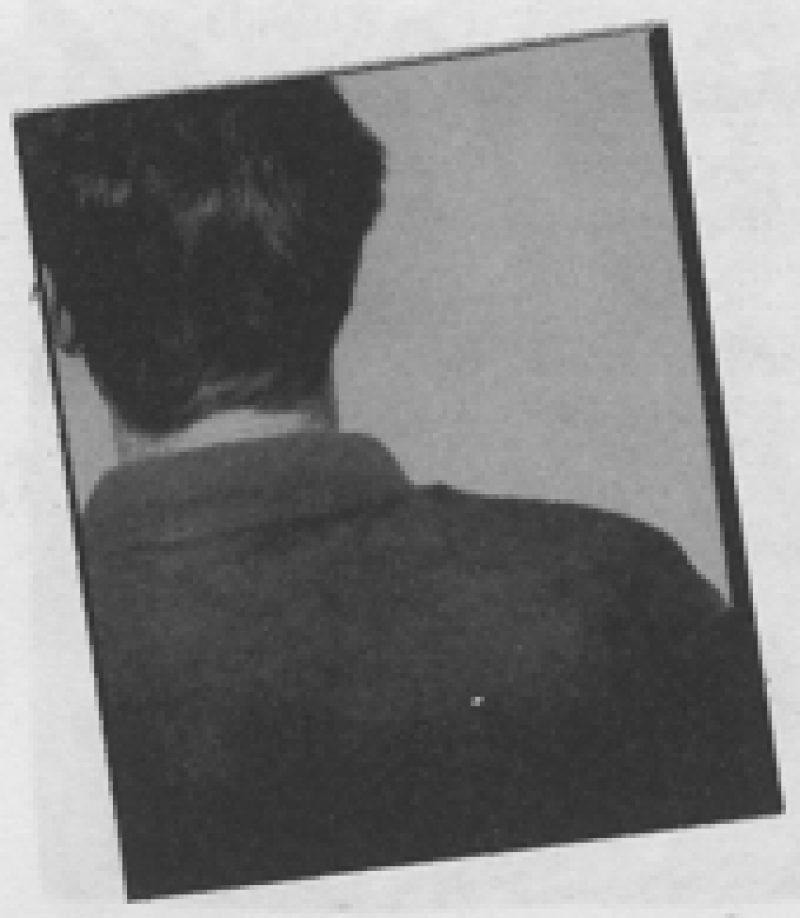 AB Where does the critical voice come from?

CC I don’t know, it’s a gift. You don’t question it. That’s just my knowledge, I don’t know where it comes from.

AB So there’s a sense of faith?

CC Yes, yes, there is, I believe in God.

Anne Bonney is a painter living and working in New York.

The Magician by Chuck Connelly