Arkadi Zaides’s work lives deeply within the embodied landscape of the Israeli/Palestinian conflict. Lauren Bakst talks with him about the process of his most recent piece, Quiet, after its premiere in New York at La MaMa Experimental Theater. 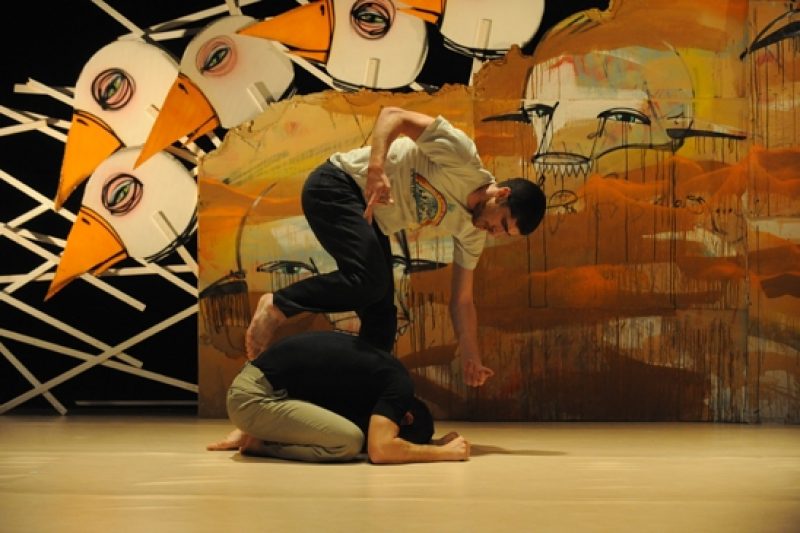 Choreographer Arkadi Zaides’s latest work, Quiet (performed at La MaMa Experimental Theater on June 8 and 9), wrangles with the emotional corporeality of the Israeli/Palestinian conflict as it is intertwined in the lives and histories of four men—two Palestinians and two Israelis. Far from the serene state its title suggests, the dance teeters on an ever-shifting terrain layered with the sediment of exhaustion, urgency, pain, and desire. Quiet, in both process and performance, makes tangible the space between bodies and the hope of living alongside and through difference.

Lauren Bakst In your description of Quiet, you write that the piece “arose from a real sense of emergency” and out of a context “which never allows the space needed for reflection.” Lately, I’ve been feeling that dance has the capacity to create space for critical reflection where there is none. How does reflection come into your work?

Arkadi Zaides Lately, through Quiet and working in Arab communities around Israel, all of my work and my will has become to reflect. Quiet came into my mind after the Gaza events of early 2008. At that time, I was in London and I saw posters around me everywhere, “Save Gaza, Save Gaza.” I came to Tel Aviv the day after the operation ended and it was like nothing had happened. I was really shaken from the inside to respond, to make something that will express it’s not all quiet. We see quiet in our eyes, but it’s actually really, really noisy. A lot of people choose to shut themselves—

AZ I guess from being overloaded. It’s becoming a routine, and we’re also very consumerist, so there’s a lot of shopping to do. (laughter) 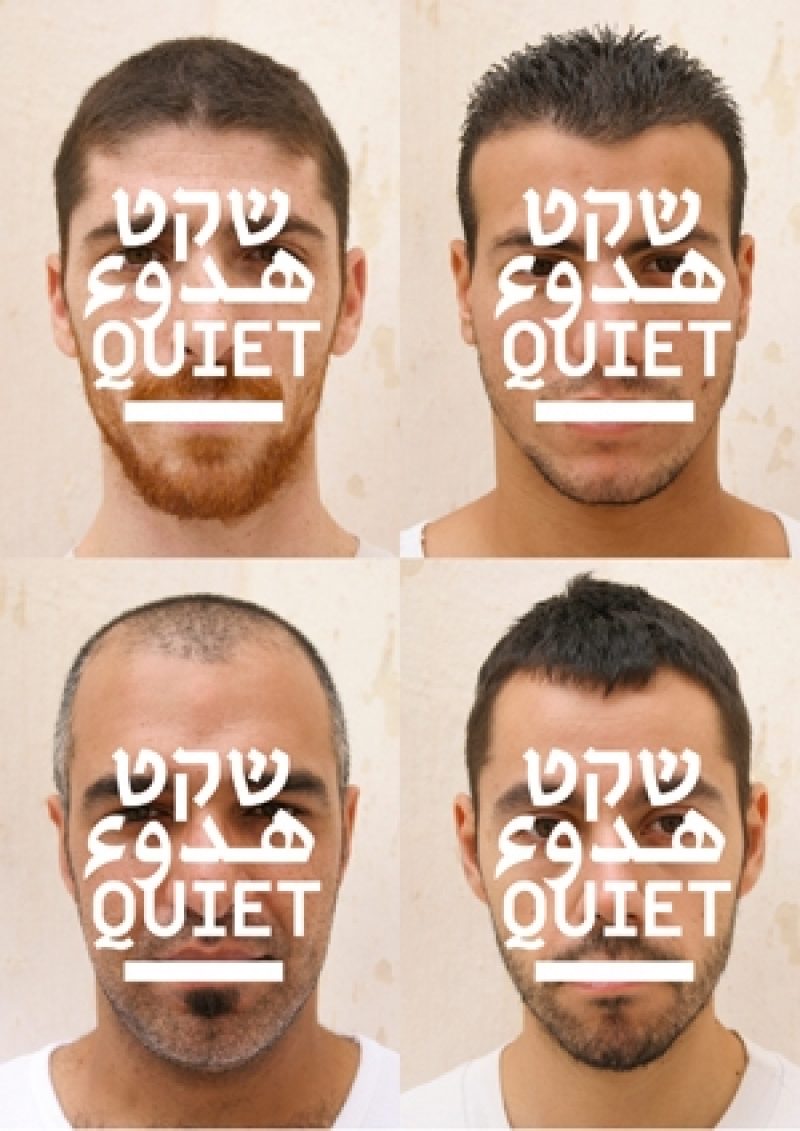 The Cast of Quiet. Photo courtesy of Dor Garbasg Graphics and Avital Schreiber.

LB I noticed in the piece that whenever there were moments of quiet, each of you would be alone, but when two of you would meet in the space, there was this explosion of energy, a kind of play between aggression and … . not tenderness but, for example, when you would be carrying each other, it was ambiguous as to whether you were fighting or helping or—

AZ —Right, you said it quite clear. The work is built like waves, like the sound score. The first thing I knew about the work was that it would have the sea inside of it. Gaza Strip and Tel Aviv are on the same shore. We share the same coastline. And of course, there is the act of going to the sea and just sitting and digesting. Each time we’re alone in the piece, it’s a place to digest what just happened. Something is happening and we’re digesting it, and again something is happening and we’re digesting it. The waves are also there because of this situation, which is never ending—coming, going, coming, going. If you choose to be aware of what’s going on, it’s exhausting. And I choose to see, to watch, to reflect, to take it inside me. When you’re not closing your eyes, it’s really painful. It’s really exhausting and painful.

LB I could feel that watching you in Quiet, especially in the beginning. It was like your body and the dance were already exhausted within this endlessness. I felt that you were searching for something, without necessarily wanting to. You just had to.

LB Could you talk more about the process, how you worked as a group and developed the material?

AZ The process was really long because each of us comes from very different backgrounds. There was a long time of just meeting each other, not only on the movement level but also on the personal level. A lot of talks, a lot of sitting in the studio, trying to do something that isn’t working, and then sitting and talking again. A lot of frustration, a lot of crying, a lot of walking out of the studio. It was, in a way, hard to peel ourselves. We peeled each other in order to communicate. Someone came to watch our rehearsals and he said, “It’s not you meeting you, it’s you meeting you with this heavy weight,” which is your history, what you remember, how you grew up, your experiences. It’s really heavy, this bag, and from this heavy bag it’s not possible to communicate because you have so many preconceptions about the other side. Like one guy entered a rehearsal and he said, “I never saw a Jew touching an Arab in this way,” and it was like, “Woah.” We were working on this part when I am trying to … to touch—

Arkadi outstretches his arms, palms open, mimicking the action I saw him perform a night earlier—hunched over the back of another man, rubbing his arms against the other’s body, a simultaneous sharing and shedding of skin.

I cover my face with one hand, while covering the face of an imagined body next to me with my other. I attempt to reenact what I witnessed—two men positioned towards me, each with one hand over the other’s face. As the two men blind each other in an attempt to connect, I am reminded of the necessity of touch and the failures of sight in the ongoing negotiation of self and other.

AZ And then we feel … We feel each other. Eventually the big breakthrough was when we sat down after a few really hard days, and I asked them, “After all this, all of our trying, not working, working, going, coming back, what is your dream?” It was really a point of exhaustion in the process, and I just asked, “What is your dream in this reality? What do you wish for?” Then the piece actually came into being, because it really is about four dreams, each one in his own desires, how he sees himself dealing with the reality, if it’s just flying away, like Ofir, he just said, “I want to fly away,” or Mohammed who comes from the slums of Tel Aviv, the old city of Jaffa, he said, “I want to be a king.” You know … You want to be a king when your life is … is not—

AZ When you don’t feel a king. Rabia’s dream was to have a break, to cut through, and that’s what he’s trying to do in the work, to change the energy. My dream was to create a space where it’s possible to communicate. 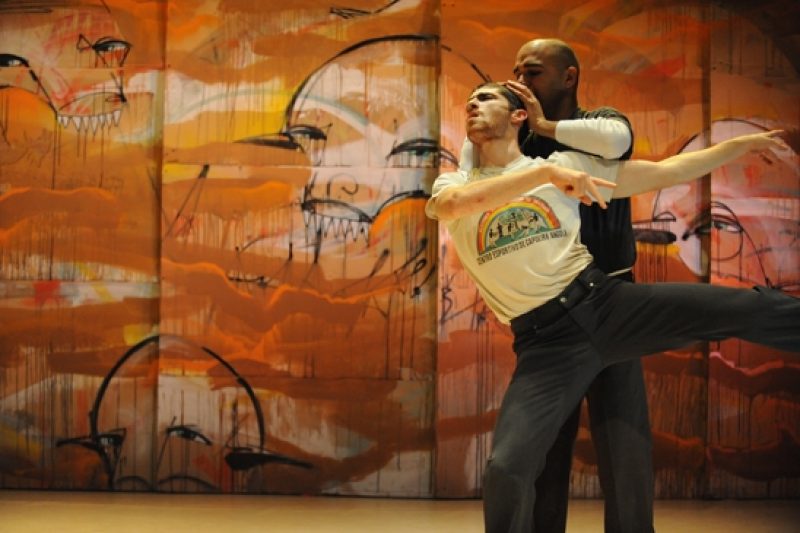 LB How has the work been received in different places?

AZ It’s been received very well everywhere. It was very important for us to perform for Arabic audiences. It’s not only about the presentation, but the outcome on a bigger level. In Israel, people are quite shocked because it’s really in your face. It’s not representational. We’re not representing, we’re just being ourselves. In Europe, it’s more like, “Wow. (laughter) It’s that serious,” but in Israel, people identify with the energy.

LB I appreciate that each of you as performers were individuals. It wasn’t just about two Israelis and two Palestinians, but about four people who also have these histories. It seems that you’re one of the only choreographers in Israel who is openly dealing with the conflict. For example, with Yasmeen Godder, whom you’ve worked with, I can tease out a relationship to the conflict, but it’s not necessarily explicit.

AZ You can relate to the power of the movers, their intention, maybe something violent in the relationships. She did one work, which was more related—

AZ Yes, this was the work I did with her. For the past three years, I’ve been curating a festival in Jerusalem where I invite artists to talk about it, because I think it’s so necessary. I really feel it. Israel has become quite right wing. I feel a responsibility as a person that gets funded by this same government. I feel a responsibility to reflect on what I see as a human being, as an artist. I promised myself that for the next few works, maybe until I escape Israel, I will continue to go in this direction. When I’m there, I don’t feel like I can do anything else. If I choose to see what’s around me, to connect to my surroundings, then there is nothing else I can express.

LB How do you feel dance functions inside Israel/Palestine? What can dance do?

AZ I had a very interesting incident, because while working on Quiet I also taught a group of Orthodox Jewish men, and a few of them came to see the show, which for me was the meeting—the clash of these two very different worlds. You know, these guys are usually in the best units of the army and they’re really for Israel and fighting for it. They’re very nationalist. We did a post-performance talk after the show and one of them said to me, “When you spoke, I really could know what I agree with and what I don’t agree with. It was very clear for me where I stand. But when you moved, something moved in me, and I don’t know what it was.”

Lauren Bakst is a dance artist and writer living in Brooklyn.