Certified Copy, the new film by acclaimed Iranian director Abbas Kiarostami is now playing at the IFC Film Center in New York. BOMBlog’s In Sight columnist Montana Wojczuk sat down with Juliette Binoche in a roundtable interview at the Crosby Street Hotel. 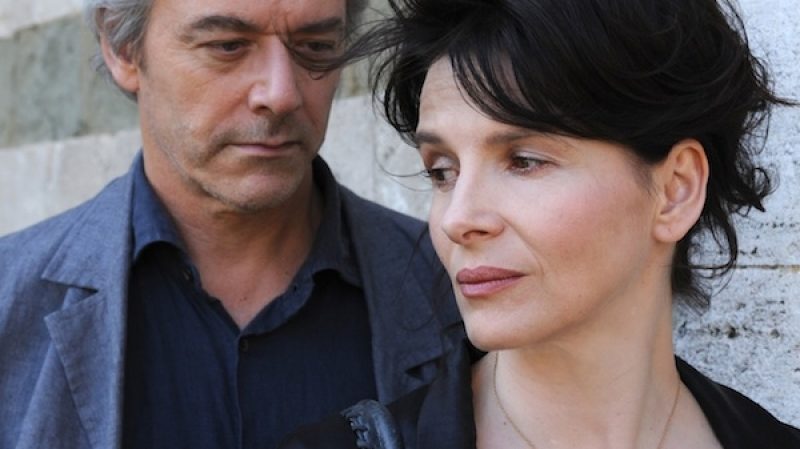 Abbas Kiarostami doesn’t like acting, so it might seem curious that he chose to work with a consummate actress like Juliette Binoche after years of exclusively directing amateurs. But, as Binoche herself says, she had to learn not to act early in her career to develop the suppleness an actor needs. Comparing herself to a steel rod, she describes being broken down by an early acting teacher. Perhaps, in part, because he works with amateurs, Kiarostami has avoided the Kali archetype sometimes associated with directors. Kiarostami is no destroyer; he is a sculptor, creating static frames that teem with emotional life. His new film, Certified Copy, is appropriately peopled with sculptures, both human and stone. It is a film about an art critic and a beautiful art dealer in the midst of a relationship that is, as Binoche puts it, “a nightmare, you don’t know if you’re going to escape or how it’s going to transform, if it’s possible to transform. But you’ve got to go through it.” The film is not a nightmare to watch, however; it is as gorgeously wrought and alive with feeling as a Rodin sculpture. Binoche compares the film to a Chekhov story. In Certified Copy, as in Chekhov’s “The Kiss,” the characters’ inner turmoil is all the more evident for being trapped within the constraint of their lives—enacted in Chekhov’s faithful embrace of the short story form and in Kiarostami’s still-frame shots. Certified Copy is richly rewarding because it is a deceptively simple study of complicated relationships between people, and also between critics and art. The critic, played by William Shimell, uses art as a way to avoid engaging emotionally with the world, while Elle, Binoche’s character, physically engages with it. As the title suggests, they are both engaged in trying to figure out whether there is something as essential as “art” or whether art is everywhere. The film dramatizes the way that both our relationships with each other and relationships with art have the power to destroy or transform us, whether or not we’ve heard the story before. I was part of a roundtable discussion with Binoche, reproduced below. Questions by other members of the roundtable are indicated as “Question,” and then “Q.”

Question How did you prepare for the film?

Juliette Binoche The first time I heard about the story I was taken by it and I loved it, working with different realities. I was fascinated by it. But when I read the script I thought, How am I going to play this, it’s insanity, or an insanity I’m not familiar with. So I talked to Abbas, he was in Tehran at the time and I said, “I don’t know anyone like this,” and he said, “What do you mean? You know neurosis. Just play you.”

Q Did you improvise?

JB There was no improvisation, it was all written. We rehearsed for two weeks and I think that really helped getting into it. Then we shot in five and a half weeks. We went so fast, because it was in sequences, and I was panicking because I didn’t know my text in advance. I was taking a weekend in order to learn what’s coming next, because as we’re shooting 10 pages go by, you want to say, Slow down please!

I had a discussion with Abbas where he told me, “The emotions an actor goes through in a film, they’re not real, you’re not in pain when you cry in films.” Well I said, “I’ll tell you, how do you cry otherwise? It cannot be only a technical tool. It doesn’t work like that, you have to put your heart into it and your imagination and your memories, everything you have, and your body.” And scientifically I think we see that the body doesn’t realize it’s acting, the heart thinks it’s real. There’s a chemistry that’s happening through the power of imagination and your capacity for opening up. That’s what makes acting refined. I thought, It will be my little secret, Abbas, you won’t know when it’s real or not. And I think that several times he was taken aback, he didn’t know some moments whether they were real, he would ask his assistant because he forgot, and when you forget you’re going into another reality, you’re creating life in film. It can be like you really went somewhere else. It’s rare but it happens. In one of the scenes in the cafe I had to stay still so much in front of the camera for long sequences. I thought about what I went through as a dancer recently with Akram Khan, with shows in 11 different countries. It was kind of an edgy period of my life. So when I came in front of the camera being so still, it provoked something in me. And I think the fact of having to go through so many emotions inside from this man (her character Ella’s husband, James Miller, played by William Shimell), I really felt like my body was not moving, but my emotions were moving as they never had moved before. And I felt really provoked by his camera and the frame being so set.

Montana Wojczuk The audience hears about the art but often doesn’t see it, and we hear about her past but aren’t sure if it’s true. How did you handle that uncertainty?

JB Well I related to her so well, any woman can relate to her so well, and men too. Because we feel abandoned and even though you have a child and all that you think, what am I doing on earth? There are all those big questions wanting to be taken care of and you cannot face reality even though you chose it. At first she is playing a little bit, being light and showing off and driving and taking him to the museum, and when he’s not interested it’s like pffft, like a cake that falls. Very disappointing. There’s a moment when the mask drops. So when he’s telling the story (in the cafe) if it’s really her or not her, I don’t know. But she takes everything personally! So, the moment he talks about her, suddenly it’s a different gear, she’s been seen. That hurts, and at the same time that puts them together in a way. It’s difficult to talk about films, because a film has to be experienced or watched. Talking about it is always a little weird.

MW Can you talk more about Abbas’s still camera work?

JB He made it so interesting. He wanted to have those two cameras (on either side of the cafe table) so we didn’t see each other when we were acting. Each of us was looking at a tape on the camera just above the lens, so I was looking at the camera as though it were him (actor William Shimell), the cafe scene as well as the restaurant scene. It was bizarre, because it was a connection/disconnection somehow. I’m imagining his expression and your imagination is stronger when you don’t have the reality in front of you.

I think it relates for me to Chekhov’s writing, there’s something human that’s beyond words. To me there’s something of Chekhov in that moment. That it’s beyond. It’s hard to explain but maybe because it’s a marriage, everything is falling down. It’s very melancholic as well as joyful, it’s tragic, you can laugh at it, there’s nothing you can’t do. It’s a whole combination of ridiculousness and drowning. And it’s what happens in a relationship sometimes, you’re completely caught in a nightmare, you don’t know if you’re going to escape it or how it’s going to transform, if it’s possible to transform. But you’ve got to go through it. [Ella] wants to reach him so much and be seen and be loved, and to have a back and forth. And it’s funny at the end when she lets go of her will that there’s something that might shift in him.

Q Did you feel uncomfortable with the camera always in front of you?

JB The only moment I felt uncomfortable was with this two-crew documentary. I don’t like to have a second camera picking things up that was not the camera of the film. They catch something that belongs to the film. I’m a little picky about that. It becomes a voyeur camera. When you’re opening up in front of the film camera it’s okay to have a witness behind [who] you won’t see and you’ll ignore. But in front of you no, it belongs to another world somehow. Otherwise there’s no boundary. It’s like everything’s sellable, everything’s cheap in a way.

Q How was it working with William Shimell? He was an opera singer and he’d never acted before.

JB Well there was a lot of singing in the morning. From him as well. I had to take care of him like my lamb in a way, especially at the beginning. I was a little frightened for him because there was so much to deal with. And I had to have a strong partner in front of me otherwise there was no film.

Q A lot has been written about Abbas working with amateurs, after seeing him working with Shimell do you have more of a sense why he does that?

JB I understand, he doesn’t like acting. And I don’t either actually. I think that especially in his own country, Iran, you want to film people you love as a filmmaker. You love to hear about them, you love their voice, their eyes, something about them or something of their way of moving. If it becomes acting it feels like oh, I’m filming a method or I’m filming a way of behaving or the actor’s knowledge and it’s not inspiring.

I’d say that my role in the film came out of our friendship—we talked about relationships, men and women, very easily right from the beginning. It was not like a seduction. And I was very clear at the beginning, I don’t want a relationship, because I was invited to his home in Tehran so I thought, Oh here we go, problems. And I said, “I’d rather have no relationship so we can keep a friendship and we’ll feel free.” He was all taken aback but in the end he loved it, because it was so freeing.

Q Could you elaborate on why you don’t like acting? Does it come more naturally for you?

JB I started out very willing, wanting to prove I was an actress. I had to be destroyed by my acting teacher in order to understand that no acting is better than acting. I learned that very early on, probably because I had so much will, so much fire. I think you really need people to shake you up. Like in life, if you have too much will it’s boring. A piece of steel needs suppleness.

Q You and Abbas are working on a new film, can you say more about it?

JB No, no. You have to be patient. It’s like a plant, you have to let it grow. The weather has his own rhythm. Certified Copy has been very fulfilling experience for all of us because it was a very small crew in this little village. It felt like a little studio created in its own reality. We all felt like we’ll never live that again, and it was very melancholic to leave. But as Gilles Jacob says at the Cannes Festival, “Never say you had a good time on a film, it’s not good for the movie.”