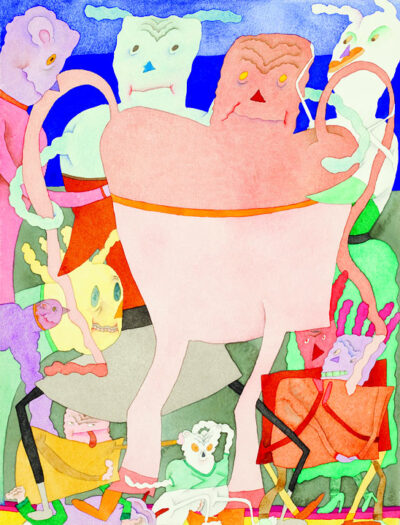 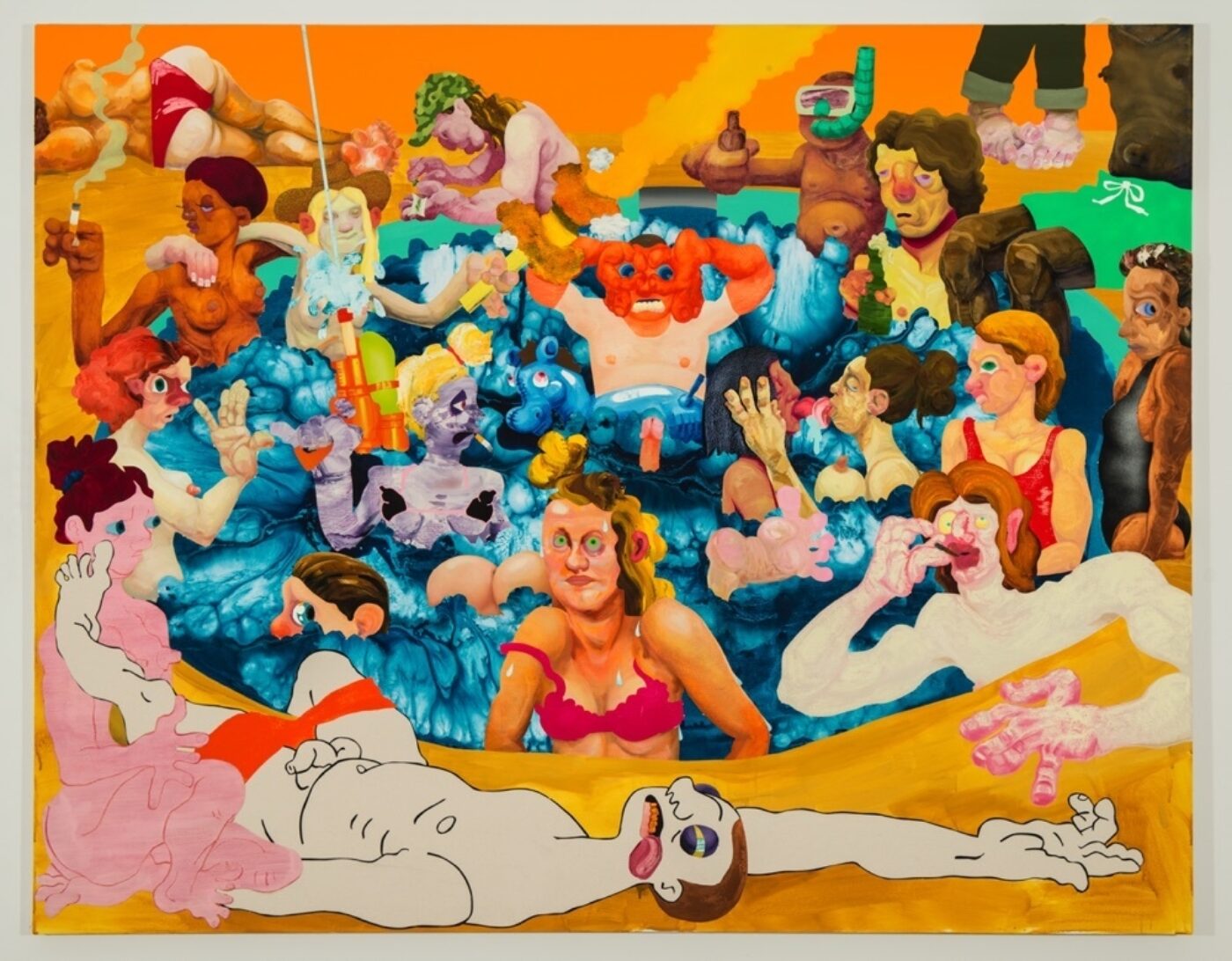 Nothing sparks a party like foreboding tragedy. The idea of a doomsday bacchanal, with all of its outrageous paradox, has been an enduring subject in art—and for good reason. Take as example William Etty’s famous 1828 painting The World Before the Flood. The contrast between oblivious human indulgence in the foreground and an impending watery grave in the background is both stark and amusing, and with our own Doomsday Clock gleefully ticking down towards midnight, many of us are raiding the top shelf.

Investigating and modernizing this paradigm is LA-based artist Canyon Castator. Like in Etty’s work, Castator’s painted subjects are on fire—but do they know that they are burning? For his first solo exhibition Pissing Match, presented at Postmasters Gallery, Castator has rendered a series of Dionysian debaucheries on canvas, set to the familiar tune of political meltdown, interpersonal atrophy, and total disorientation. In a series of large-scale works Castator’s cartoonized figures guzzle beer, flail in the nude, roll doobies, and watch nuclear warheads launch across TV screens—all while the emergency exits melt and coalesce. Despite the work’s dizzying surrealism, Castator has distilled a contemporary notion of reality, where societal collapse is suddenly plausible and an entire generation of young people, faced with an uncertain future, have retreated into humanity’s most simplistic pursuit: unadulterated, hedonistic pleasure. Pissing Match is a sharp social critique, which considers a range of issues and brings into focus the close relationships between fear, fun, and depravity. 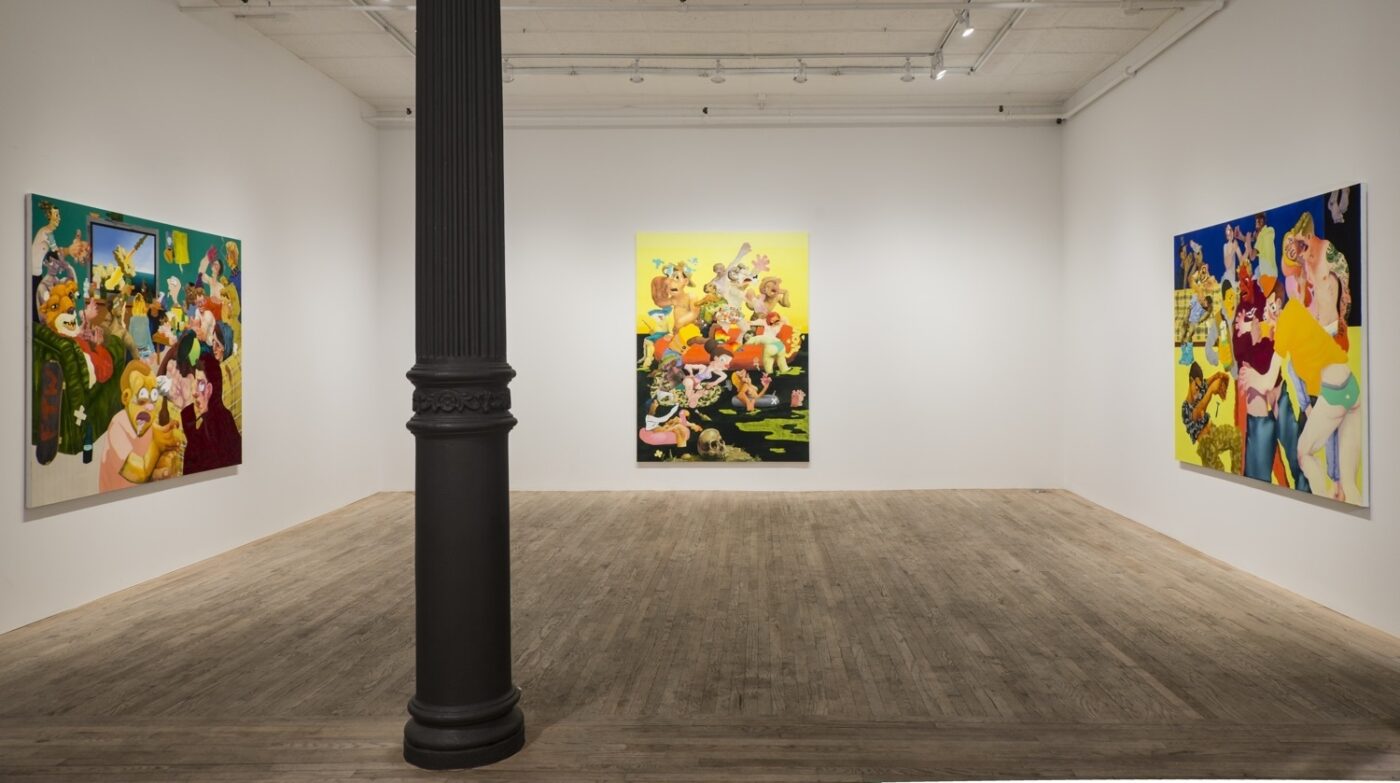 Castator’s collaged compositions feel modular, almost fiber-optic in intensity. The digital quality of the paintings is reflective of his working process. In order to perfect his graphic compositions, Castator combines images on his iPad, which allows for the quick manipulation of multiple elements at once so that every possibility and interaction can be explored at will. This also contributes to the feeling of fragmentation that permeates much of his imagery: his actors, though inhabiting the same plane, seem to be wrapped up in their own personal hallucinations. Cesspool, a work in which a cast of creatures are crammed shoulder-to-shoulder in a festeringly blue hot tub, is dominated by this dazed disconnectedness between its characters, such that each one is a cut-and-pasted island in a sea of frenetic activity.

As difficult as it may be to translate energy onto a canvas, Castator has no problem there—the mania borders on fever dream. Yet there are tactful choices in composition that give Castator control over the wildness in his paintings. In each work Castator has chosen to keep his backgrounds flat and relatively contiguous: they are mostly uninterrupted swaths of (sometimes sickening) colors. This keeps the attention on his depicted bodies—pissing, farting, masturbating, et. al. (looking away is futile)—and side steps overt busyness. In addition, Castator uses varying amounts of cartoonification on his figures. Some are incredibly dimensional, while others hardly project off the picture plane. This dynamic range of perspectives is oddly pleasant, and heightens Castator’s acute sense of absurdity. 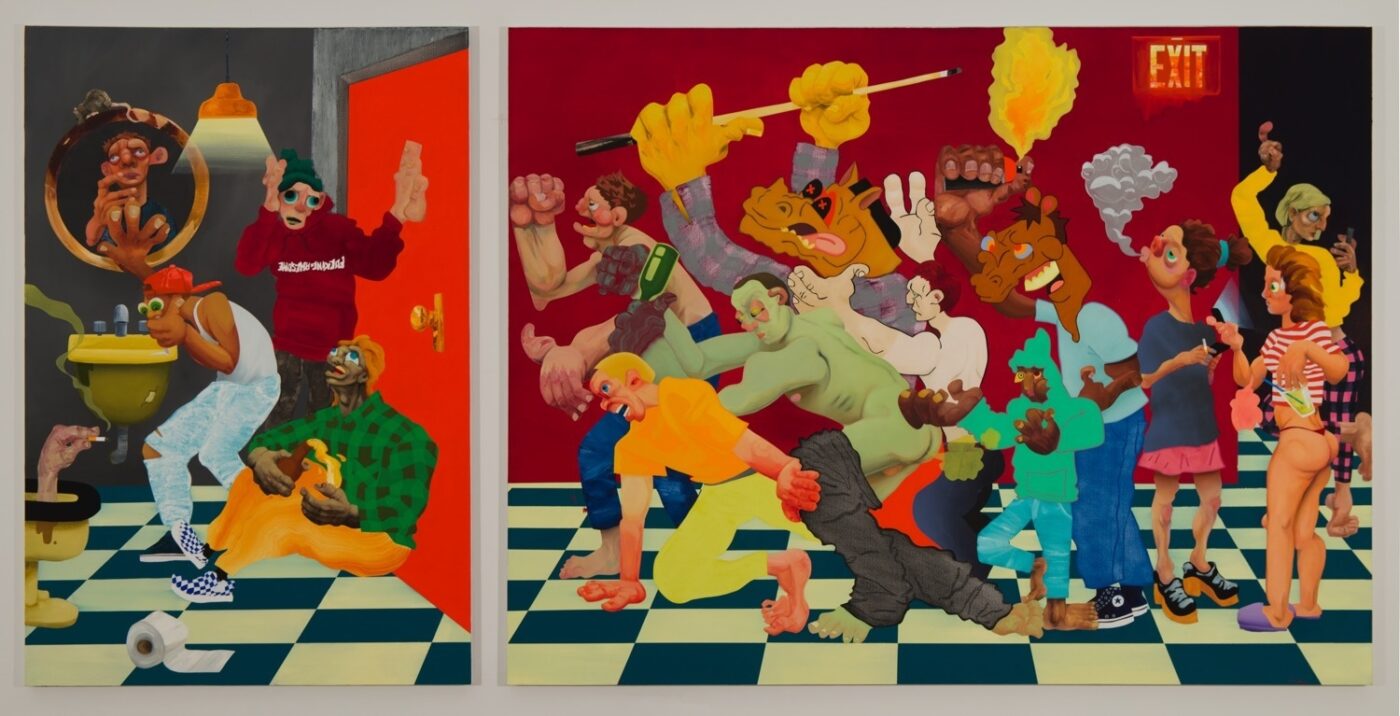 Where Castator is most successful is through the works which, rather than reveling in distraction and disparate pockets of action, explore a fuller narrative. His diptych Bathroom Line is among the stronger paintings in the exhibition. Bathroom Line not only takes pages straight from the Bushwick millennial handbook (in more ways than one), but sees its actors cohere around a central movement: one panel pushing towards the other, and the other pushing back. Castator’s use of diptych to delineate internal spaces captures the “us versus you” position of the work, and the tense energy between the two panels (one more aggressive and surging, the other introspective and desolate) suggests the painting’s multifaceted story. This work is also a true example of Castator’s biting social criticism. The phenomenon of the “bathroom line” is both a synecdoche for the party scene (à la Miley Cyrus’s “We Can’t Stop”), as well as an archetype that exposes its loneliness. Inside the bathroom, which spans the left-side panel of the painting, several figures are bound in different states of drug-haze. One pushes feebly back against the oncoming rush behind the door. Another turns away from his surreal reflection in the mirror while snorting a line off the sink. A third is handed a cigarette by a disembodied hand emerging from the toilet. The grey, dingy listlessness is palpable. “Bathroom Line” reminds us that, rather than being an innocuous coping mechanism, substance abuse catalyzes anger and quite literally cleaves a room in two.

Facing infinity is difficult and fleeting. Drinking and doing drugs is easy. Party culture, for all of its fun and abandon, has a habit of proliferating the apathy, contempt and negligence that got us into this mess in the first place. Canyon Castator’s unflinching exhibition keeps us looking at both sides of the coin, and is a strong showing from a young artist whose emergent career is looking like a beacon through the radioactive murk.

Pissing Match is on view at Postmasters Gallery through February 10, 2018.

Emma Howcroft is a writer and arts administrator living in New York, NY.