Call of Nature by Barry Yourgrau

I walk in the woods. I see a man pressed against a tree. His pants are at his ankles. My first thought is that he is answering the call of nature. But then I realize he is rotating his hips heatedly against the pit of a low-forked branch. Suddenly his hands grip wildly at the bark and he slumps forward. “Oh baby,” I hear him groaning. “Oh baby baby …”

Shocked, I hurry away from this scene. On the other side of a hill I stop and try to collect my thoughts. I remember reading somewhere about practices such as these, but coming upon them in the flesh, on an afternoon stroll, is something else again. I look around at the greenery. The glimmering agitations of the leaves begin to take on a whole new personality. I shake myself and start walking. “It’s not possible, it must be the full moon,” I think.

But it isn’t. Two weeks later I’m hiking in a different country and I come around a bend and stop in my tracks. A man lurches backwards away from the path into the undergrowth. He looks wild-eyed, his face is flushed red. There is a violet odor of alcohol in the air, an atmosphere of debauch. A bottle of whiskey lies next to a pine seedling, which is bent to the ground in unnatural submissiveness. The man sprawls down onto his seat. He flaps awkwardly, trying to get back up and at the same time cover his fly, which bulges enormously. “I didn’t know it was just a seedling,” he croaks desperately, “honest, I didn’t know it was just a seedling!” 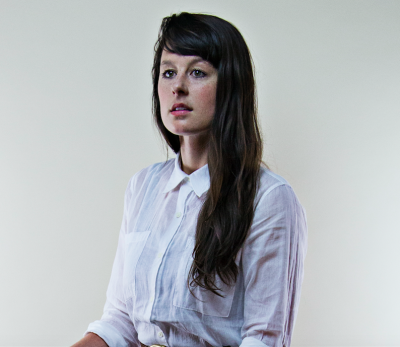 The Babysitter at Rest by Jen George