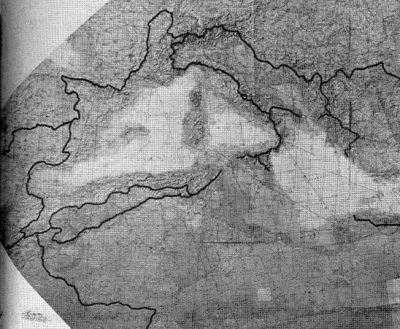 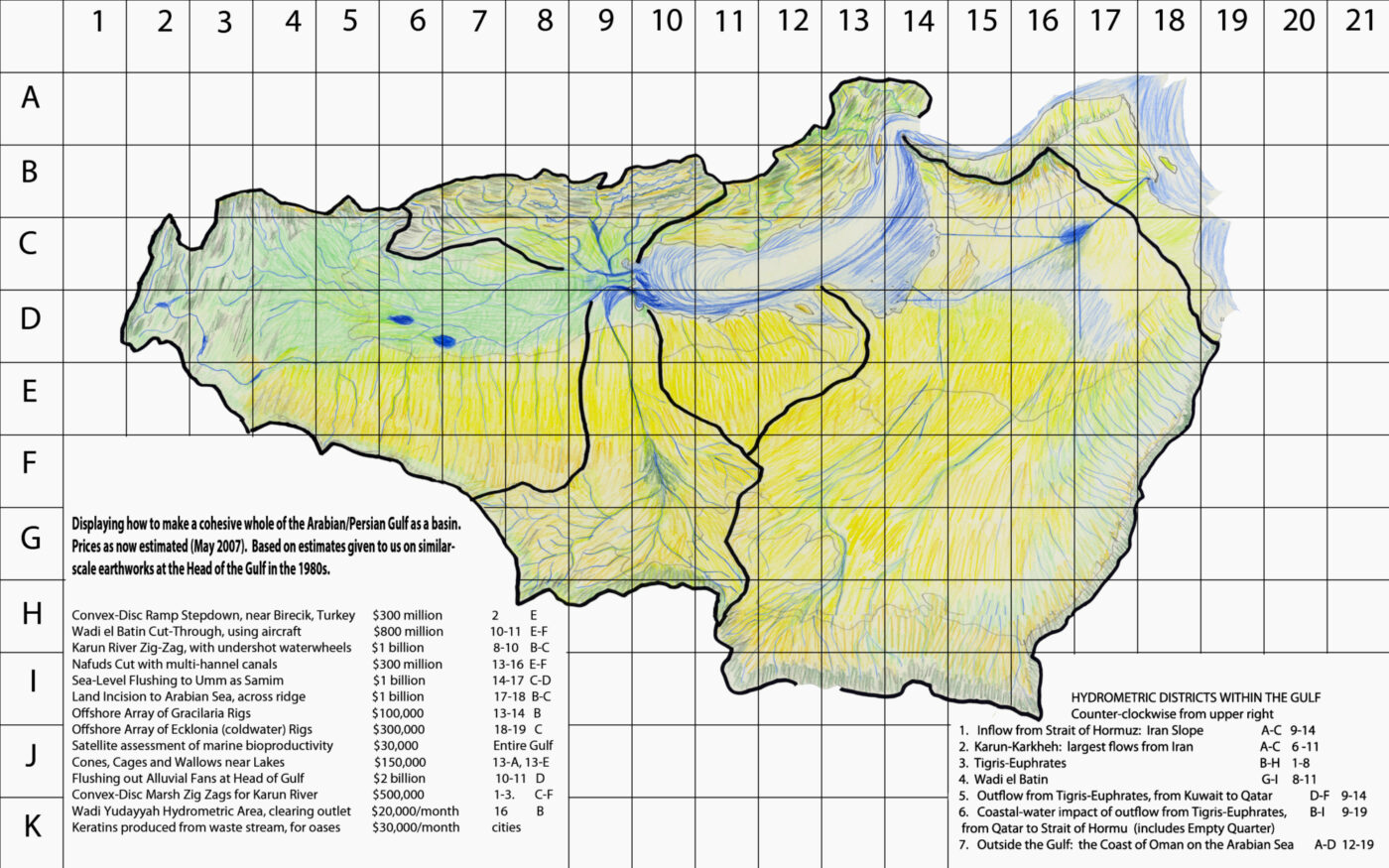 In 1982, BOMB Magazine published images of my ocean-basin mapping along with a letter sent on July 7, 1981 to the director of the Iraqi Mission to the United Nations. The FBI read the one-page piece and searched for me. They first visited colleague Wolfgang Staehle, who directed them to a loft at 597 Broadway. The loft was financed by sales to TV companies of satellite imagery of war zones. The entity doing this work was an art-conceived company, now called Ocean Earth Development Corporation, or OEDC. The FBI wanted to know about the company … and the letter.

Through the next decade, OEDC’s communications with the government of Iraq, and also the Government of Iran, deepened. When I stepped into the Iraqi embassy in Paris in October 1990, during the diplomatic pause between Iraq’s seizure of Kuwait and Desert Storm, intending to talk about how to rebuild with ecological advantage giant earthworks designed by Russian engineers but comparable to works conceived 20 years earlier by American artists—and recently destroyed by Iran-contra financed action—I saw that their dossier on Ocean Earth was about three inches thick.

Most of the dossier in Paris may have been a copy of what had been given to Iraq’s embassy in Washington, based on what diplomats called a “grave crisis” at the United Nations: a senior official (number three or so) had provided the government of Iran, and not Iraq, with satellite imagery and analyses supplied by Ocean Earth for impartial UN use. When the news broke out, Iraq’s Mission to the UN told me that they had never heard of any of the imagery being supplied to the UN. Only Iran knew, and they used the material to great military advantage. The Iraqi Mission to the UN said they could no longer trust the UN. That was in 1987.

Two press conferences were arranged at the UN. At the first, in 1987, Ocean Earth was represented by Joan Waltemath, Sante Scardillo, and me. At the second, in 1991, Ocean Earth attempted to explain its long-term objectives, but was stymied by an accusation by the Iranian Mission to the UN that Ocean Earth’s talk about earth art and ecological projects must be a hoax, or worse, an attempt to extort money. Dennis Oppenheim and Colin De Land were present, but chose not to speak. Scardillo and I dealt with the upset.

Now we are back. Iraq, having found a new direction after Saddam, has demanded that US troops leave (by January 1, 2012), and looks to assert a new, postwar power. We, Ocean Earth, reassert our original proposal to Iraq and Iran: that they cooperate on restoring the long-ago ecological wealth, with grasslands, throngs of wild animals, and enough water of their shared region: the Arabian/Persian Gulf.

In the United Arab Emirates, I first exhibited and then corresponded with curator Princess Hoor al Qasimi on ways to make the entire Gulf, including its insloping lands, become a verdant place. It could be a healthful stopover for aerial animals flying between Africa and Asia.

On meeting with marine scientists in the UAE, I learned that the oceanography of the Iranian side of the Gulf is very different from the oceanography of the Arabian side. Along the Arabian side, from the mouth of the Shatt-al-Arab and Tigris-Euphrates on to the Straits of Hormuz, there is a constant pressure of sediment-laden waters against the shore. This pressure becomes greater along the southern coast of the Gulf, the coast of the UAE. The pressure is physically manifested in accumulations of crushed seashells. What follows here is a current version of what had been started 30 years ago. I intend to resubmit to Iraq, and to Iran, and to all the countries around the Gulf, with the potential for a closer-knit Gulf Cooperation Council. For now, this GCC works largely on petroleum and nuclear-fuel power. We of Ocean Earth would race forward with new but simple technologies, employing hundreds of thousands of now-unemployed youth. The chief aim is post-petroleum and post-dam energy production, superseding the huge dependence, in the Arab (and Israeli) world, on a very temporary source of wealth.

What was written in 1981 still holds. We will try to reach its goals again. What could trouble the FBI about these words?

As an ecological system, the Arabian Gulf is in jeopardy. Already overgrazing and desertification have, over centuries, desiccated most of the terrain, greatly reducing drainage and evaporation. Now, industrial pollutants and agricultural chemicals threaten biological existence in the Gulf. But if that biological existence were strong and manifold, the Gulf could sustain a substantial biogas, seaweed, and fisheries industry. If the lands sloping into the Gulf were comprehensively monitored and managed for diverse yields, they could be restored to pre-human productivity. The Basin could become a self-sufficient ecological and economic system. But land-use practices and resource-extraction practices bode ill for the Basin. The Arabian Gulf is in danger, and so are the peoples on its slopes.
—Peter Fend 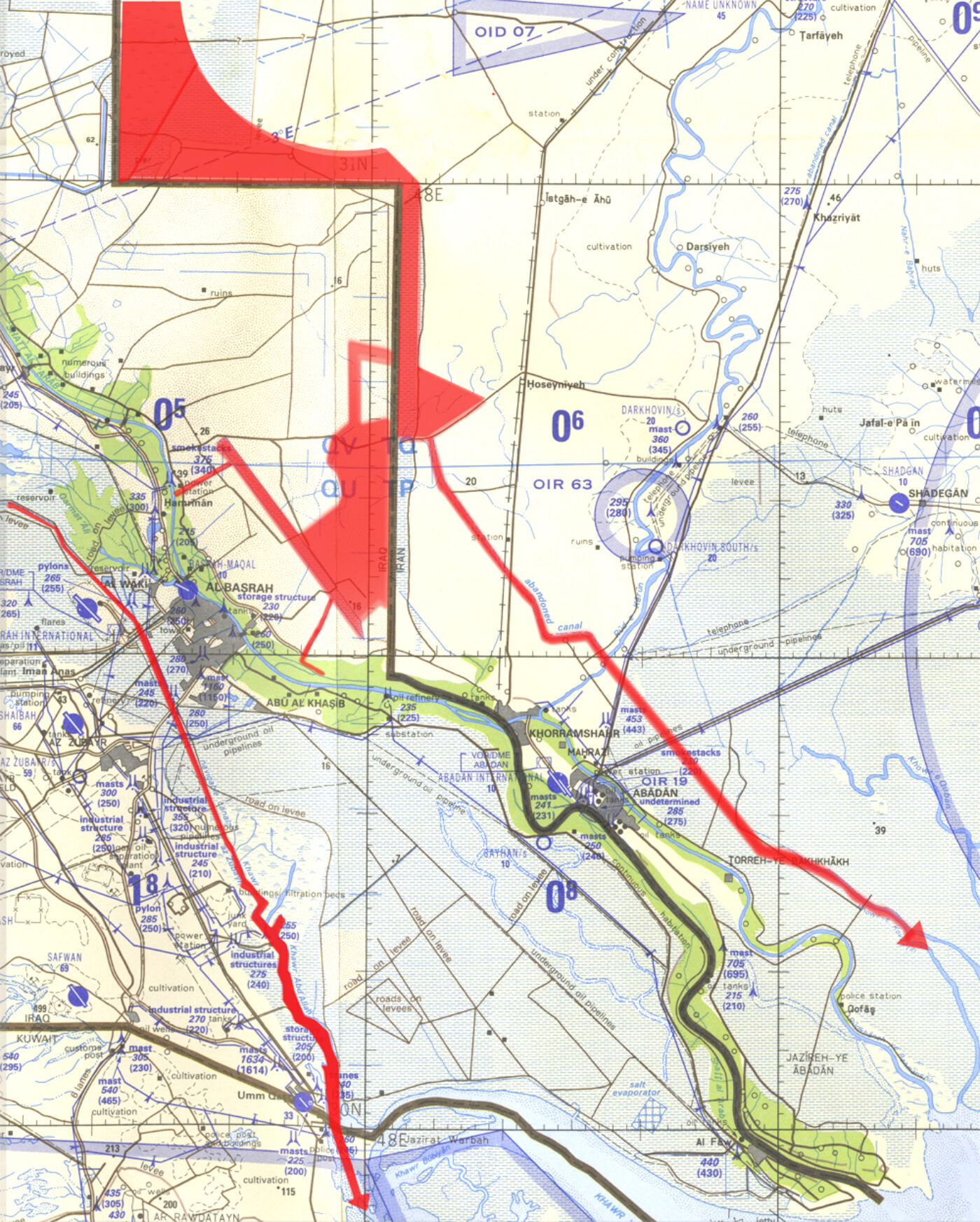 As aeronautical charts show, traces remain of the massive water structures built during the Iran-Iraq War. So, they could function again. Red here shows what could be rebuilt as waterways. Should something like that happen? Ecologists can decide. The Tigris and Euphrates would be pulled apart to receive inflows from the Karun-Karkheh and Wadi al-Batin on opposite flanks. This allows a flushing-out of the alluvia accumulated in the converging mouths of all four rivers. For armistice purposes, the zone between an eastward-placed channel of the Tigris and the current Iran-Iraq border, which separates two different time zones, could be given a name, and concept, from Dennis Oppenheim: Time Pocket. 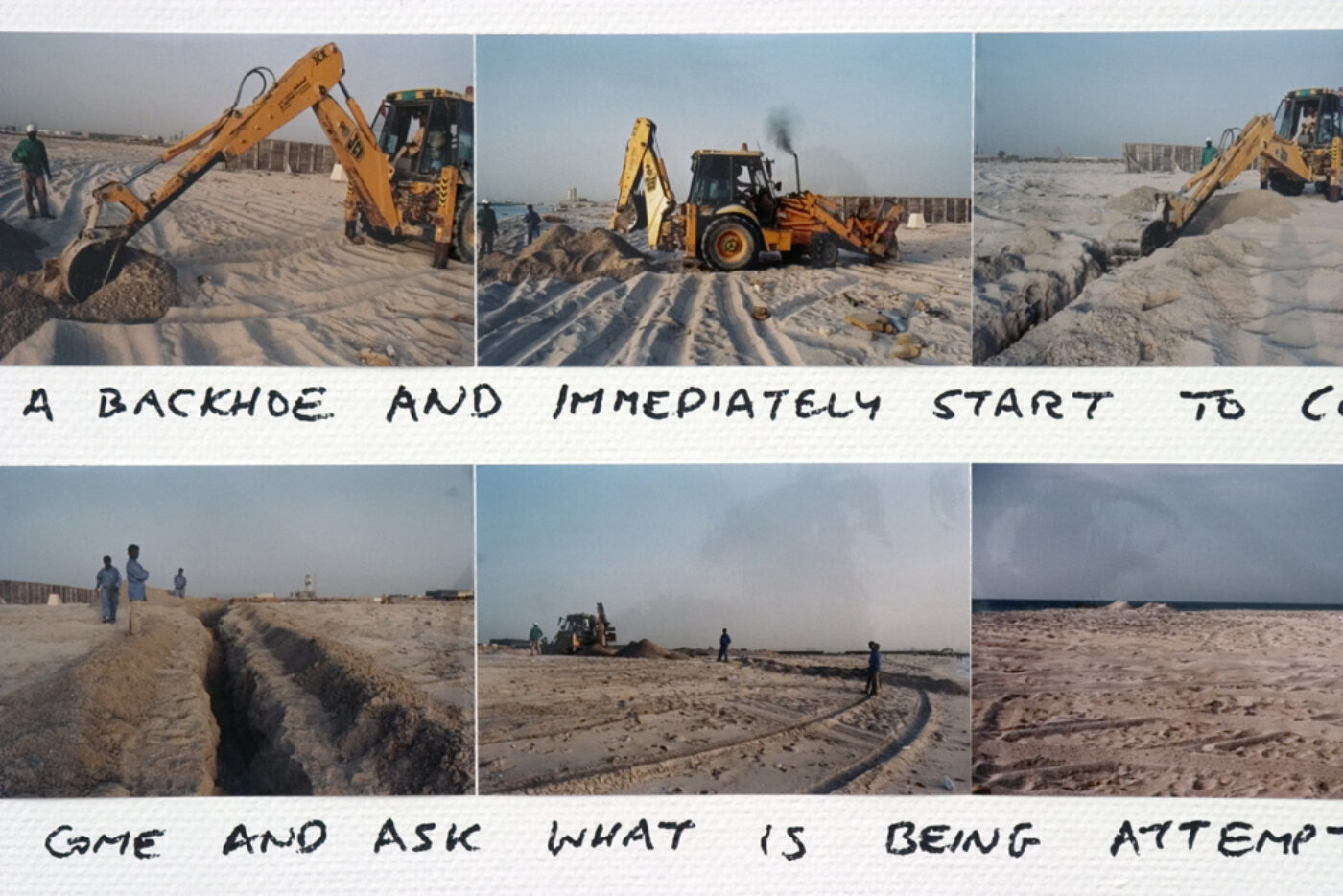 At the mouth of the Wadi al Yuddayah in the UAE, I make cuts to reconnect the Gulf with salty depressions blocked off from the Gulf by … not sand, but crushed seashells. The Gulf is very alive: given the ambient temperature of 35-40 degrees Celcius, ideal for biomass fermentation to yield gas, one can expect a surfeit of hydrocarbons. Funded by the Kunstverein Heidelberg, 2008. 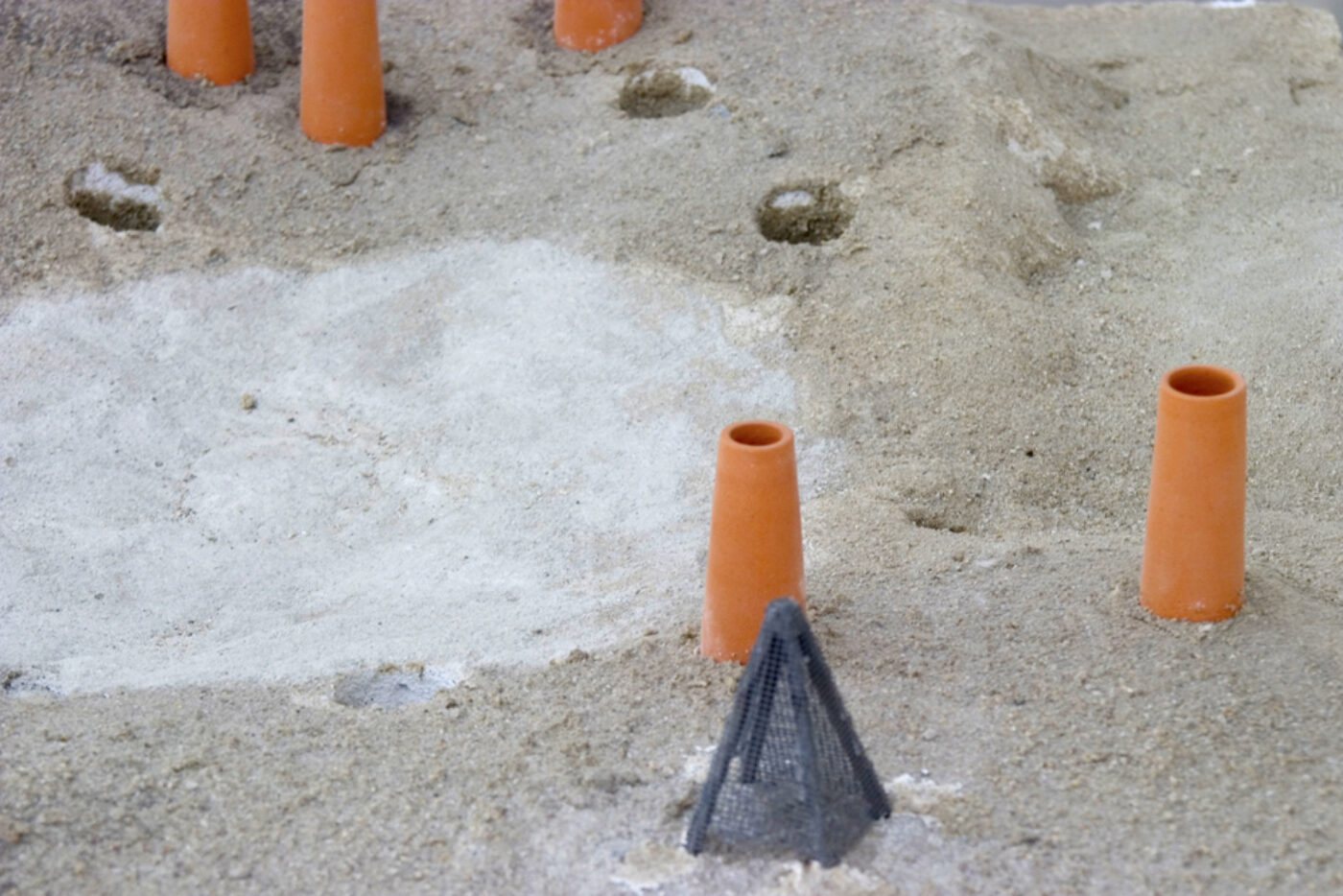 Near where underground freshwaters reach salty or brackish waters, and before those waters become salty too, one can build freshwater wallows. These could attract birds and insects. Upright cones create micro-habitat, and cages shelter birds. In concavities and holes, keratins from waste streams can be deposited. After a few seasons, vegetation builds up. These sites are linked with similar wallow-buildups along migratory flyways. Produced for Georg Kargl Fine Arts, Vienna.

As an artist concerned with architectural questions, I have made regional planning maps for most of the world which organize terrain according to hydrological drainage––not into rivers only but into saltwater bodies, including the salt lakes, seas and bays of the world.