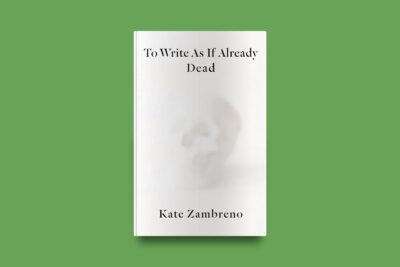 For the occasion of BOMB 40th anniversary, we asked some of our frequent and beloved contributors to reflect on work they’ve published in the magazine and to consider their thoughts on this work today. Below, Kate Zambreno revisits her short story, “Susan Sontag,” published in Issue 135.

[8:24 PM May 27: A lot of my book, Screen Tests, existed for a while as a title, before it became a piece. I had a feel for the rhythm or the joke—the structure of it. This was one of the stories that ended up in there]

I like to think about what other people do when they’re alone. This is what I would really like to know about people, but I never know how to ask. Some people try never to be alone.

[8:24 PM May 27: For a while, when I was working on writing after Heroines, this is all I knew—I wanted to write about what I did when I was alone, and about wanting to think about art that was about being alone—not lonely, just literally alone, alone in a room.]

[8:23 PM May 27: In the period of time attempting to make work post-Heroines and upon moving to New York City, where I was reflective/anxious over what it meant to be an author, I began to have a series of spirited conversations over email with a couple novelists, both more public than me, about Susan Sontag. Why “Susan Sontag” (the person, or should I say, the persona, or should I say, the writer) has become such a bellwether, at least for me, I don’t know. I’m realizing she appears in recent work, at least my fascination with her, as blurber/critic (in Drifts), and she’s a specter in the new Guibert study, remembering a scene at a party recounted in Edmund White’s review of Guibert, of Foucault furious someone had brought Sontag. In many ways this piece was a form of self-fashioning, and self-interrogation, as to what it meant to be a body in a room who was also known by a name. I guess in some ways I always thought of Sontag also as the ultimate careerist, in terms of writing, and I felt distanced from this aspect of her.]

To exist, in so strong and intense of a mind, the solid outlines of her body. To photograph so definitively, as if there were such a thing as a self.

[8:25 PM May 27: This is probably my favorite line in the piece. It’s still a recurring obsession in current work.]

[8:26 PM May 27: The kernel of this idea is that such a thing did happen, and I became so amused by it I wrote this piece in a notebook, and it was really about the repetition of “Susan Sontag” many times, the constant repetition of this famous name, that both obscures and reveals. I was interested in writing that was about digression and compression. That was my longing—to write short pieces, that were voice plays, or reports, like Thomas Bernhard’s Voice Imitator. I wrote it, and later typed it up and worked on it, and I remember thinking there was something so light about it that I liked. Either there was something to it or there wasn’t. It had I thought a fugitive quality. It felt like not writing, which I also liked. I sent it to, I remember, Ben Marcus, who was the editor of the American Reader (right?) He didn’t take it, but he said he laughed and really liked it. So I sent them to Mónica de la Torre, who was then senior editor, this was probably at the end of 2015. She wrote me something like, I like this one, can you write another? And so I wrote another and decided to call them “screen tests.” And stories. When she accepted them for First Proof that was a really really big deal for me. And I doubt I would have written any more if she hadn’t seen something in them.]

This was obviously a hypothetical conversation, since Susan Sontag has been dead for some time. I liked thinking about that, about how my friend viewed the persona of Susan Sontag, because it was so different from how I thought of Susan Sontag.

I don’t think of how famous people or people I admire would view me at parties, or if they would recognize something in me if they met me, probably because I do not go to parties, and usually avoid gatherings of more than five people, unless they are at book-related gatherings I’m involved in, and then I have no choice.

[8:28 PM May 27: For a while—for several years—when I was at work on Drifts this piece was the only new piece I had written, and so whenever I was asked to read something, I read this, and it became almost an inside-joke, reading this line….]

And if I were to think about how I conduct myself at the handful of parties that I have attended in recent years, almost always with fellow writers, I imagine I might not come off too well. I think I might come off as severe, in my dress and in my mannerisms, or if not severe, then formal, or if not formal, then not full of ease, although that’s not how I think of myself, or, that’s only how I think of one version of myself, the writer in public, which might be unconsciously mimicking Susan Sontag.

[8:33 PM May 27: at this point when I read it out loud people were often confused but then when I repeated “Susan Sontag” here there was often a laugh, when they realized I was in on the joke, that this is about repetition of the name so many times it almost becomes meaningless.]

I am actually just pretty awkward, because I do not go to many parties, and I’m usually anxious to leave. My favorite pastime at a party is studying bookshelves, to see how books are arranged, or not even that, to greet the authors on the shelves as friends. So if Susan Sontag was at party that I was also at, I would probably be more comfortable going through Against Interpretation or Under the Sign of Saturn than making small talk with Susan Sontag, for after all, you can tell a lot about a writer by how much Susan Sontag they have on their bookshelf, if they have Death Kit, have they read it.

[8:29 PM May 27: I do not, and I have not. I think that was also the fascination with Sontag for some time—her yearning as a novelist, that she was a successful essayist and reviewer and book critic but in many ways a failed fiction writer.]

Once I think about it, making small talk with Susan Sontag sounds pretty excruciating. I am pretty sure Susan Sontag would not like me if we met at a party. Perhaps I would be anxious to perform, and to say clever things, and I would bring up Michel Leiris and Maurice Blanchot and be unsure as to pronunciation.

[8:30 PM May 27: This reminds me of one of the first events I did when I moved to the city. I had to talk about Roland Barthes and the writer Katherine Angel coached me on how to say his name—“Bart” like Bart Simpson. For someone who likes to write a lot about French writers my pronunciation is deplorable.]

[8:41 PM May 27: I remember Mónica worked with me on this last passage at the end and made some really good nuanced edits—the conversation was how to preserve the stutter but make it a bit less repetitive.]

Kate Zambreno is the author of several books, including Drifts (2020) Screen Tests (2019), Heroines (2012) and Green Girl (2011). Her novel To Write as if Already Dead was published by Columbia University Press in June. She lives in New York.

An Aesthetic of Immediacy: Kate Zambreno Interviewed by Julia Bosson