“Poems are living things. Please dance with them.” Bob Holman talks to BOMB about Picasso, Kathmandu, and reading poetry as wrestling match/lovemaking session. 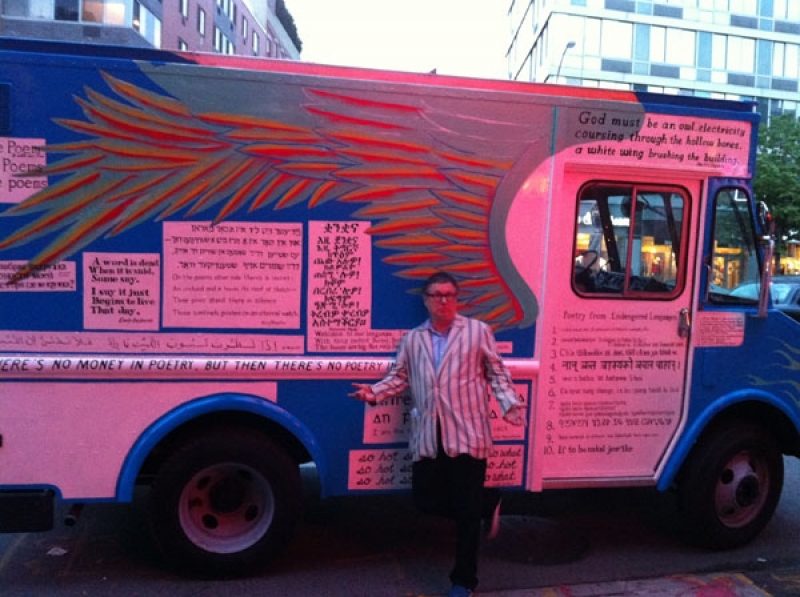 I first met Bob Holman in a workshop I took with him at Naropa University’s Summer Writing Program. The workshop ended with our class at a gas station in Boulder, Colorado singing, reading, and mobbing people with poetry. We protested high gas prices and handed out poetry bucks (counterfeit bills with poetry printed on them) to everyone filling up their tank. Since then I have seen Bob in and around New York. This interview explores his new book Picasso in Barcelona, orality, and the current state of poetry.

Samuel Jablon Could you tell me about your new book, and any inspirations that brought it about?

At Fourteen I Could Paint

At fourteen I could paint better

SJ Did you spend a lot of time in Barcelona? I found it to be such a crazy/amazing city filled with Gaudí’s architecture. Plus I loved how the city goes right to the ocean, with this weird small public gym at the water, and the maze of allies connecting plazas, Botero’s bronze cat, pickpockets, bombed buildings, prostitutes, and drug dealers.

BH I’ve been three times. In 1975, as Franco lay dying, I stopped off on my way to Morocco. Police with machine guns roamed the streets. “Paperback Writer” was released. A guy tried to set my hair on fire. In 2003, the family visited. We hit all the Gaudi places, which is a lot, and then the Picasso Museum, with Elzabeth and the kids. And I was there a month ago, performing for KOSMOPOLIS: Amplified Literature Festival, where I read in Spanish (which I also did this summer at the Medellín Festival).

SJ Sounds like Barcelona. But back to poetry. It’s such an ancient art form—how do you think it “stands up” to new media art forms?

BH Poetry predates writing. It was the original verbal art. It drives technology. What we now call poems were once called “written poems” or “book poems.” What we now call “video poems” will eventually just be poems. Sure, film is the art of our time—but poems on film is the furthest that the medium can be pushed. Then it evolves into a new medium.

SJ Compared to a reader engaging with a text, do you see the oral nature of poetry as a more direct experience?

BH Most direct: the poet is reading to you. But reading a poem to yourself is a totally different and equally wonderful experience—that space in your mind where it’s a wrestling match between you and the poet over what the poem is. I mean, a lovemaking session.

SJ There is almost a performance-like quality or dance to your short poems. Was this intentional?

BH Thank you. Yes. Poems are living things. Please dance with them.

SJ What are some important qualities in contemporary poetry?

BH The return to orality. Appropriation as poetry’s joke on the world that laughs at us poor humans. And the use of poetry to awaken us to the crisis of Endangered Languages.

SJ Could you talk about your experience traveling in Africa studying oral language?

BH This is a book, not a question.

SJ Are you going to write this book?

BH Perhaps. As Thoreau writes, “My life is the book I would have writ / but I could not both live & utter it.”

SJ Do you think poetry needs to get off the page and be more like the Pop Up Poets, who pop up on unexpected subway journeys to perform poetry?

BH Poetry doesn’t need to do anything. Orality is making a comeback because people are understanding that HEARING poetry is a different experience from READING IT TO YOURSELF. Both are DIVINE. I love PUP—they are my favorite mob, and are exemplary in showing that young poets are still young poets—on a toot for poetry! Serious as Gandhi! Public as Subway! 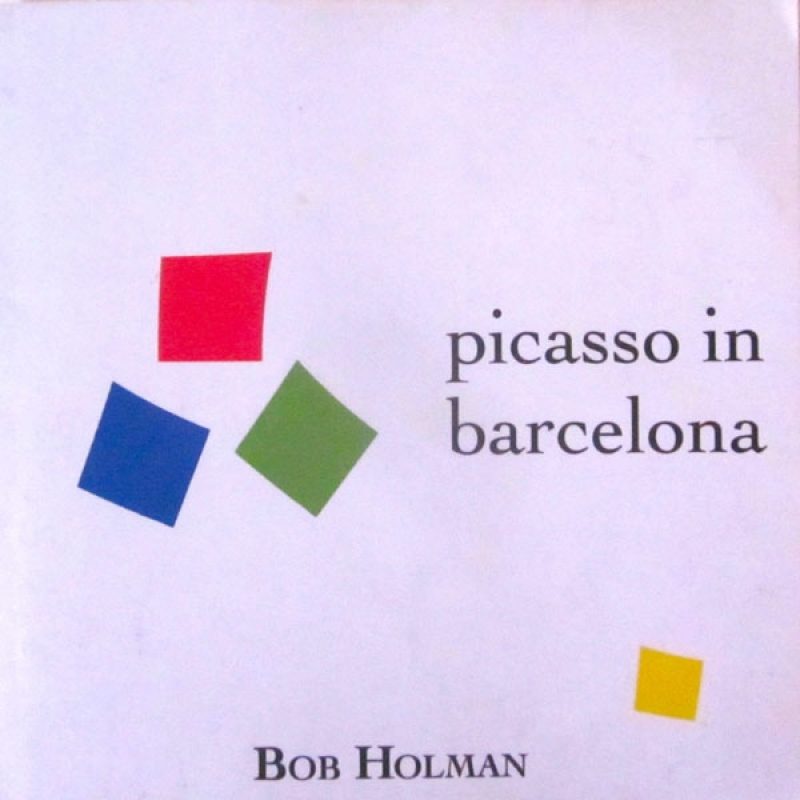 SJ The Pop Up Poets came directly out of the Bowery Poetry Club. Could you speak on the changes that are happening there, and the space that is being created for young and old artists, writers, musicians, performers, and poets to come together and collaborate?

BH Bowery Arts & Science, the nonprofit that programs the stage at the Club, is institutionalizing to better serve the community. Institutionalizing is always a double-edged sword for poets who hate metaphors like double-edged sword. If it works, perhaps the Club will be more established and not have to be in the constant crisis mode it’s been in for its first ten years.

SJ What are your goals for the Bowery Poetry Club and Bowery Arts and Science?

BH Poetry to, for, of and by the People.

SJ OK, back to your book, Why Picasso? Do you see a connection between painting and poetry?

BH All art is related. I married a painter.

SJ Would you consider these short poems to be sketches?

SJ Have you read Picasso’s poetry?

I’m quite attracted to the crazies

I am one of you

My pen takes its own life

There are no others

SJ Was their any specific reason you had your poetry translated into Spanish?

BH I have a terrific Spanish translator! Sol Gaitan was drawn to these. Translating the Dance Mix allows me to read in Español. Plus the poems take place in Barcelona, right? So actually they should be in Catalan.

SJ You seem to always be crisscrossing the world spouting, presenting, studying, and talking about poetry. Could you talk about where you are now, and any recent poetic experiences you’ve had?

BH Last night I went to the Patan Doka neighborhood of Kathmandu, where I had dinner with a lively international group brought together by Kunda Dixit, publisher/editor of the Nepali Times, and his wife Milan, founder and principal of the Rato Bangala School in Kathmandu. We visited the first exhibition of a World Peace Museum that Kunda is creating, filled with photos of violence and death, images from two Maoist wars: Nepal’s, which ended five years ago, and India’s, which continues today. The Nepalese photos are from three books trembling with images of the human loss during the Nepalese Maoist war. They don’t take sides. Death doesn’t take sides. “You know,” Dixit remarked, “there’s going to be an article in the paper tomorrow about how all Nepalese are poets.” In a couple hours I will go down to an 8 am breakfast at the Yak and Yeti, with my fellow US writers, and we will meet the press, as they say, a gang of Nepalese journalists. And I hope Dixit has recovered and will be there, because I want to bring up that idea of “All Nepalese are Poets” as a possible answer to the seemingly intractable military situation here in Nepal, where the former rebel party, the Unified Communist Party of Nepal (Maoist), on January 22, 2011, formally handed over control of its 19,000-plus combatants to the Nepalese government. So Nepal now has a kind of peace, and two armies (the other being the Nepalese National Army) who don’t know what to do with each other, and over momos (dumplings), I’m going to suggest: “Poetry Workshops.”

SJ So you think poetry is capable of uniting people?

BH Poetry is relevant in bringing people together when used as a tool of self-discovery and community-building. If you don’t believe me, go read the Renga. See how 54 of the most individualistic humans on the planet gave themselves up to a project of utopian collaboration on a scale heretofore unheard of. (Of course, there’s also the wonderful poetic tradition of resistance, that poetry’s purpose is to be purposeless: “Not mean / but be” as Macleish wrote; “Poetry makes nothing happen,” Auden.)

BH And after I finish poking my nose into international politics, I’ll go teach some poetry workshops myself, to college creative writers, to high school at-risk students, to Kathmandu’s nascent poetry slam scene. I’ll talk about the Bandh (strike) that shut down the city yesterday, as two minority cultures, Tamang and Newar, protested for their rights to their identities and cultures and languages, languages, like so many others around the world, which are currently endangered by globalization.

SJ Do you see poetry creating change in the world?

BH Is this the moment where we find the news in poetry? Where we acknowledge and laugh with Billy Collins who, while protesting the Iraqi War from the Poet Laureateship stated, “Being a Poet for Peace is like being a General for War”? Where 54 US poets link poems into Crossing State Lines: An American Renga, and Farrar, Strauss, and Giroux publishes it? Where the UN Indigenous Peoples Forum invites the Endangered Cento to its meeting? Where the POEMobile begins turning poetry into architecture? Or not? Stay tuned. Better yet, get untuned, invent a new tuning, and come over to the Club to invent spring.

SJ Do you have a poem to end on?

I look at people

Take off your clothes

I will make a book cover

And put a photo of me on the back

To make sure it sells

She will become my blue period

Now she stands there unconcerned

Put in a cigarette. There.

And lines straight to the ground

You’d never know he has a hard on

Samuel Jablon is a painter and writer based in Brooklyn, New York.