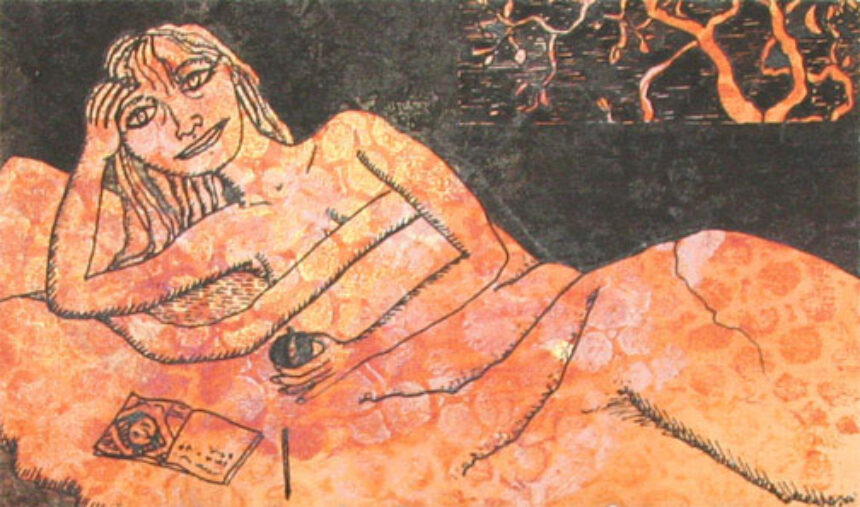 Julian Talamantez Brolaski’s Advice for Lovers (City Lights Books, 2012) opens with “Dedication to Venus” and a proclamation, “I am a love poet, and dedicate all my verses to Love, that god among goddesses, goddess among gods.” Immediately invoking Ovid’s apostrophe to Venus in Ars Amatoria, Brolaski’s poem is one of allegiance and ardor. Issuing an invitation to the reader and student of love, the speaker summons likeminded devotees to follow the poet’s lead and expertise: “herkneth ladings, lordes, if you would love, to these advices.”

The reader’s promised tutelage is twofold, for the newly anointed “disciple amoris” is offered instruction in love and love poetry in all their sacred and profane valences. At once philosophical and sexy, the poet’s enticing edifications assure that the willing pupil will become:

Learnt in all the lossom ways that love is
Lernt in that sweet science of bruising
Which renders lewd, so that at your choosing
You may yet plot to snare your pet
Or blaze thir parts in englyssche, or by your very glance
To hook a hating falconet.

However, in love poetry this list of different ambitions all take place within the poem. The “plot to snare your pet” occurs in verse and meter as much as the plan to “blaze thir parts in englyssche.” Advice for Lovers’s poetic seduction knowingly occurs via lament, enticement, praise, and reproach. All are come-hithers, all are the “sweet science of bruising,” wholly conjured and lustful and alive in the poetic line.

In “On How to Transform an Imaginary into an Actual Lover,” the speaker presents a claim: “If you look closely enough at a word, you’ll find it contains its opposite.” The line invokes the love lyric’s traditional conceits of irreconcilable, heartrending conflict. In accord, Advice for Lovers’s poems express love’s impediments and their reconciliation, or lack thereof, and invoke many of the love lyric’s traditional themes—a desired beloved is pursued and captured or lost amid turmoil over rivals and the pulls between chastity and consummation, spirit and body. The thematized tensions are also registered in the lyric form itself, which at once expresses the hope and impossibility of capturing love’s ephemeral charge and of fixing the fullness of always fleeting moments.

In this and other senses, Advice for Lovers situates itself firmly within the Western literary tradition. Establishing a camaraderie with fellow love poets, the poems summon previous poets and their textual beloveds. Dante’s Beatrice and Petrarch’s Laura are present beside both implicit and explicit references to Pindar, Sappho, and Shakespeare. In “The Perfect Love Poem Tutorial,” the speaker counsels, “Love poetry is about knowing your references,” and makes good on the claim with allusions to Barrett Browning’s melodic measures, Catullus’s erotic arguments, Rochester’s libertine wit, and Wyatt’s wild pursuits. Less obvious love bards Paul Celan, Jack Spicer, and Gertrude Stein join the poet familiars. In the mix are contemporary writers such as Kasey Mohammad, Alli Warren, and Stephanie Young, who are quoted and named alongside popular culture figures Prince and Usher. In this spirit, Advice for Lovers effectively and provocatively broadens love poetry’s lineage. Here is T.S.Eliot’s call for invention through and not against literary history. However, Advice for Lovers offers something other than Eliot’s mere filing system formulation of history that, while always complete, is also altered when the new settles beside the old. Instead, Brolaski’s book is a festive mixer and everyone who is a lover is invited to the party.

Inextricable from this engagement with literary history is an energetic play with traditional prosody. The book’s innovative sonnet cycle explores its subject in sonnet-inspired verse, prose poems, odes, and ballads. Rhyme plays against off rhyme, and standard verse forms are reshaped from aubade into “Baba Aubade” and “Nobaude,” and from blazon into “misblaze.” Neologisms abound as “hibitions” and “complicateder” skillfully share stanzas with a range of vernaculars that move seamlessly from hearken to haterz, cant to cuz, and writ to wad. Throughout, Brolaski’s dynamic lyricism is on the move and the make, highlighting linguistic and sonic invention. As with the pursuit of one’s objet petit, the language in these poems is restless and driven. In a productive tension with the book’s many concluding couplets, words and phrases seldom rest on a final note and instead generate more language: “a rose is arrows is eros.” In “The Art of Love as Converse,” the initial use of the word “polyglot” transforms in the final lines: “Here’s glot for you: algolagnia. For / the wind puffs our smoke so high there’s never any private … even/ Webster has lost its license for the lexicon.” Distinctions between public and private, and masochism and sadism (the footnote tells us that algolagnia may mean either) lapse with Webster’s inability to contain the new uses of language.

With the sparks of new language comes a revision of conventionally gendered pronouns. In “Song of Songs,” the poet professes to a beloved, “Your lips are like tulips your teeth are like doves / Honey my prowess I take as it comes.” Such addresses to a “you” express the paradox of one’s address to another. As the love poet knows, “I love you” is the most intimate and impersonal of statements, earnest in its performative utterance yet grammatically and libidinally variable in its object. Further, the love lyric’s ambiguous “you,” purposefully or not, obscures the addressee’s identity and often prompts reader speculation about the details. This is most famously exemplified in the ongoing attention to Shakespeare’s thou, thee, and thy. Who is the coveted you? Was he or wasn’t he? Is there one lover? Two? More? Of course, such fascination is intimately and usually morally tied to gender and sexual identity. Brolaski invokes and disarms this history of inquisitiveness by remaking the pronoun, frequently removing the gendered signifier and replacing it with xir, xe, and xem. While retaining a discreteness that does not name names, the x marks a gender inclusivity that refuses to divide into the standard he or she.

At one point, the speaker asks, “How do you theorize love?” The question resonates throughout the book, with various contrapuntally sung responses. One rejoinder is in “The Real,” which theorizes Love and its corporeal and less tangible manifestations. Invoking the Lacanian Real and imaginatively figuring its embodied symbolization as chin, hand, and heart, the poet speculates:

See the Real gleams out if its bath
With a chin like Spartacus
Mortal desires, the real
Hand foisting

The real heart, a jest at call
And response. Many break when they would seem
To hang—would a real experiment mean having
No form to feign to fuck?

Andrea Quaid is a writer and critic. She is a founding editor of the new UCSC Poetry and Politics imprint. Recent critical and creative publications include the American Book Review, aPlod, BOMBlog, Jacket2, Lana Turner, LIT, and Los Angeles Review of Books. She is a faculty member of Bard’s Language and Thinking Program and California State University, Los Angeles.