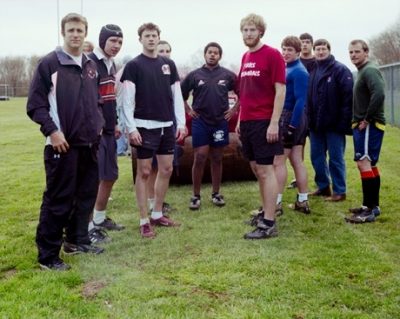 I’d called you from the road, from some rest stop just over the Jersey line, to explain there’d been freezing rain through the mountains in Pennsylvania and everybody was doing 50, oblivious to the ice, until someone way up there tapped the breaks and then suddenly four, five cars were spinning out. The two directly in front of me had started listing in opposite directions, spinning like coins, a moving barricade. They were too close to each other—the one had been tailgating—and as the drivers tried to keep control of their cars, they nicked each other and pinballed into the ditches on either side, opening up the road just as I passed through. It was terrifying, Chrissy, really. I came about two inches from being sideswiped. Fishtailing. Unable to slow down. I still don’t know how I managed to straighten out. And the rest of the way through the Water Gap, I was shaking, hands curled tight around the steering wheel, strangling it. Think about the state of mind I must have been in. Fourteen hours on the road, my leg cramping up because the cruise control was dead—more than cramping up, it was buckling, like someone had tied a barrel to the tendon at the back of my knee and was rolling it down the hill behind me—and I’m inching along at maybe 20 miles an hour on this twisty, dark road, going past car after car stalled out in the ditches, smashed up against the trees and embankments. I’m counting them, 30, 40, 50 cars, and I’m thinking, if this gets worse, there’s no way I can go on, and at the same time, I’m imagining what you must be saying while you wait for me at your parents’ house in Ridgewood. Where is he? What’s he doing out there? I bet he met some girl in Chicago. I know he did. It would be just like him. I bet he’s with her. And he didn’t even call. I’m imagining the interrogation I’m in for the minute I set foot in the house. It’s only a 13-hour drive, Scott, and you said you’d made it to Ohio yesterday. You’re telling me you up and lost half a day? Please. Show some respect. Tell me the truth at least. Your neck all stretched and pulsing with disgust. I’m thinking, What can I say? To explain myself is to defend myself, and to defend myself is to paint myself as guilty. But when I finally came down out of the mountains and pulled into the rest stop to call, you surprised me. You said, We’re all worried. We saved you some dinner, baked ziti from Alonzo’s, and my sister made one of those salads of hers. Take your time. Drive safe. I can’t wait to see you. I was so confused that I wondered for a moment if maybe I had died, or somehow crossed over into a different world. Think about that. I’m sitting in a parking lot in the middle of nowhere, unsure if I even exist anymore, because why?

I got out of the car and stood there for a while, shaking my leg out, staring up at the halogens. I was cold. I was tense. Gnarled and shivering. Thinking how nice it was going to be when I held you again. To be in your arms and safe.

When I finally made it to your parents’ house, I let myself in and called out your name. The lights were all off, but I could see the glow from the TV room at the back and I could hear you all, that constant sound of women that lights up the place. Your mom, your sister, and you waiting there for me. I was in the kitchen by the time you heard me. The three of you exploded, shrieking and shouting in a manic frenzy, clapping your hands and singing my name and you leapt up and came skipping toward me, actually skipping, twirling around me, Scott-y, Scott-y, Scott-y, draping yourself around my neck and hanging there, making me work to hold you up. What did I look like? Did you pause to notice? You were all wound up, putting on a show for your mother and sister. But you must have seen how exhausted I was. Unless you were too drunk. You’d said there’d be a glass of wine waiting for me, but the three of you had polished off both bottles by the time I arrived. I sat there in a daze, half listening to you, unable to keep up with the speed of your chatter, something about your sister’s job and the boy in the cubicle around the corner from hers, how she’d kissed him at some bar during the going away party for a coworker everyone secretly hated. Right in front of the whole office. How wrong is that? she asked. Can I still like him, now, or is that … ? Then you guys were on to your dad’s bad moods, always a favorite topic, laughing at him, calling him nuts, so someone ate his bagels, the store’s just down the street, he can be such a baby, moping over nothing like this all the time. The three of you, speaking in the shorthand you’d developed, gleeful and powerful, being girls together, and me slumped in the corner of the couch, there but not there, picking at the food you’d saved for me.

Then, once your mother shuffled off to bed, the mood softened a little. You said a quiet hi, you held my hand. When your sister zapped on the television, the two of you let me pick the show. I laid my head in your lap and you didn’t complain. For a while there, I felt comforted, loved. The muscles in my shoulders started to uncoil, my eyelids eased shut, I inched off toward sleep. Until you jabbed me with your finger. Hard. Are you sleeping? You knew I was, because, how could you not? Are you sleeping? Like you’re on patrol, policing my behavior, regulating what I can and can’t do. Scott? You barked it. It was an accusation. Like my exhaustion was an affront, a crime. So I gave up. I pulled myself off the couch and wandered away, headed up the stairs toward the bedroom reserved for us. Fuck you, I said. What was that? What did I just hear you say to me? The floor rumbling beneath me as your outrage revved up, prepared to peel out and chase me down. Your sister snickering in the corner of the room. I didn’t repeat myself. I didn’t turn to look.

A few weeks earlier, your father had come home from the office one night planning to balance his checkbook and pay the bills. He’d left them on the corner of the living room table, a neat stack organized from largest to smallest, each total marked in pink highlighter. To make sure everyone understood that these papers were important and should be left alone, he’d slapped a Post-It on them and scrawled “DAD’S” across it in big blocky letters. He’d weighed the bills down under that paperweight of his from the Harry S. Truman Presidential Library. Now the stack of bills was gone. Pat? he called. Pat, where’d those papers go? And your mom came scurrying, already defensive, raring for a fight. What papers? My bills. What bills? There weren’t any bills. Right here, on the table. I put them here this morning. No you didn’t. I did, Pat. I did. Right here, he said, pointing at the spot. Your mother’s words, when she spoke again, were clipped, daring him to contradict her. Well. I threw a bunch of junk mail away, but no bills. She crossed her arms and waited for him to argue. So. He squeezed his fist like he was pumping a tennis ball. His face went red and he dropped his head to hide his rage. Then he walked slowly into the front yard and screamed, bellowed wordlessly at the night sky. When you and your sister told me the story, you’d taken a perverse glee in this image. Your dad out there in the cold hemorrhaging his despair. Hilarious and so very predictable. You found a solace of sorts in his impotence. Funnier still was the sight of him later, picking through the trashcan in the kitchen, fishing out the bills and their preaddressed envelopes, limp and soggy now, coffee stained, speckled with eggshell. Ah, Dad, you’d said, and then you’d bugged those gorgeous eyes of yours and giggled.

I thought about this as I dragged myself up the steps. I thought about the indignity of it all. You were closing in behind me. Are you walking away? Are you actually walking away from me? When I reached the bedroom, I kicked off my shoes and waited, bracing myself for what I knew was coming next.

Joshua Furst is the author of the novel The Sabotage Café and the short-story collection Short People, both published by Knopf

In the car she says, “I have a ticket to Chicago.”